In its most boiled-down form, DFS involves the process of identifying the highest-scoring players at each position in a given week. With close to 20 playable options at the quarterback and tight end positions, along with even more at the running back and wide receiver positions, it is a feat in itself to identify one position correctly. To finish at the top of a DFS contest, you must hit on basically all skill positions and circumvent the randomness associated with selecting defenses. Doing all of this while also fitting under the confines of a salary cap makes DFS one of the most difficult setups to beat consistently, especially in large-field tournaments.

Being first and foremost a data company, PFF has the ability to build and train models not only on public data but also PFF specific data, such as receiving grade and pass routes run, among a litany of other variables. Utilizing specific variables, we can build a model tuned to predict performances where a pass-catcher scores more than 25 DraftKings or 20 FanDuel receiving fantasy points.

Week 1 was a great starting point for this blowup model. For players who were not questionable or worse from an injury perspective, we had a superb hit rate. The model was high on all of the Falcons' receivers, Anthony Miller, Allen Lazard, D.K. Metcalf, Emmanuel Sanders and Robby Anderson. At the tight end position, we had a few more misses but picked out Dallas Goedert, who was the second-highest scoring tight end on the slate. Let’s dive into the best plays, according to this blowup model, while providing some context on how to attack these situations in DFS. 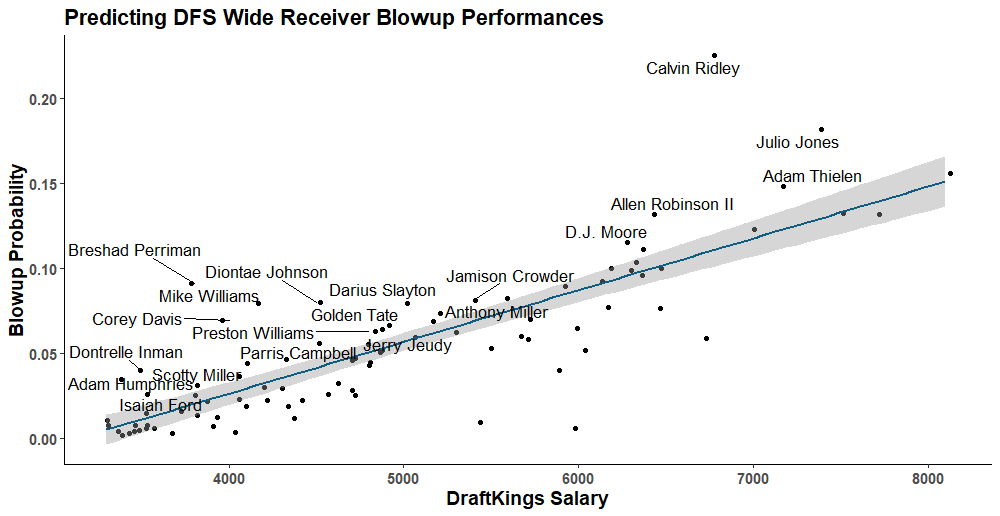 Some stats are sticky and some aren’t. Few things are more random than scoring touchdowns, so to write off a player solely based on that line of thinking is a flawed process from the start. Julio was tied for the third-most targets — along with his two receiving teammates — in Week 1. He also had the highest total air yards, which projects better than anything else going forward.

The touchdowns are coming — the concern is if the Falcons don’t need to drop back 50 times in a game, but given the total from the betting market, there should be plenty of opportunity for Julio Jones.