Being first and foremost a data company, PFF has the ability to build and train models not only on public data but also PFF-specific data, such as receiving grades and pass routes run, among a litany of other variables. Utilizing specific variables, we can build a model tuned to predict performances where a pass-catcher goes over a certain site-specific scoring threshold. This threshold is defined at 25 DraftKings, 20 FanDuel or 20 Yahoo receiving fantasy points.

This model provides the percentage chance that each receiver will meet or exceed our fantasy-point threshold for the site given their historical opportunity. The model won’t be right on every player, but it is useful in identifying the performances we want to unearth in our DFS lineups.

The blowup model was once again on in Week 16, as Brandin Cooks, Jamison Crowder and Michael Gallup all appeared on various sites as an opportunity to buy into. Cooks seemed like one of the best plays at the wide receiver position heading into the weekend, and he rewarded DFS players with a monster first half. Allen Robinson II was a viable option and simply needed to score a touchdown on one of his 13 targets.

There were a few misses, as D.J. Moore, Russell Gage and T.Y. Hilton didn’t live up to expectations. There were some hits among the lower-priced options, with the volume we projected paying off for a few who found the endzone.

Tight end was a little dicier, but Travis Kelce once again rewarded players who paid up for his services. Jimmy Graham wasn’t on anyone’s radar, as the tight end position was once again a spot to pay up for in Week 16.

Since this model is based on recent performances by players, there can be blind spots when someone returns from injury or other injury news breaks late in the week in their favor. A prime example is Calvin Ridley, who looked set to explode at some point with no Julio Jones. Our model liked the prospects for Russell Gage, but this was still a situation where there was enough volume for both to benefit. These are situations where it pays to be aware of all injury news before locking in your best DFS lineups.

Week 17 has plenty of usage concerns, as some teams are resting all of their players and others could easily only get one half of playing time. Motivation is also a question for teams well outside of the playoff picture, which makes Week 17 one of the most difficult slates to handle for DFS purposes.

Uncertainty creates opportunity, however, as prior usage may not accurately reflect Week 17 opportunities. There are a handful of games with high totals, but only four of the 16 games have a total above 50. Five more games look completely unplayable from a DFS perspective. We should see heavy ownership on players with increased opportunities, which could make fading the market at the wide receiver position the best approach in Week 17.

Make sure you are up to speed with the latest information, as situations should remain fluid until kickoff Sunday. 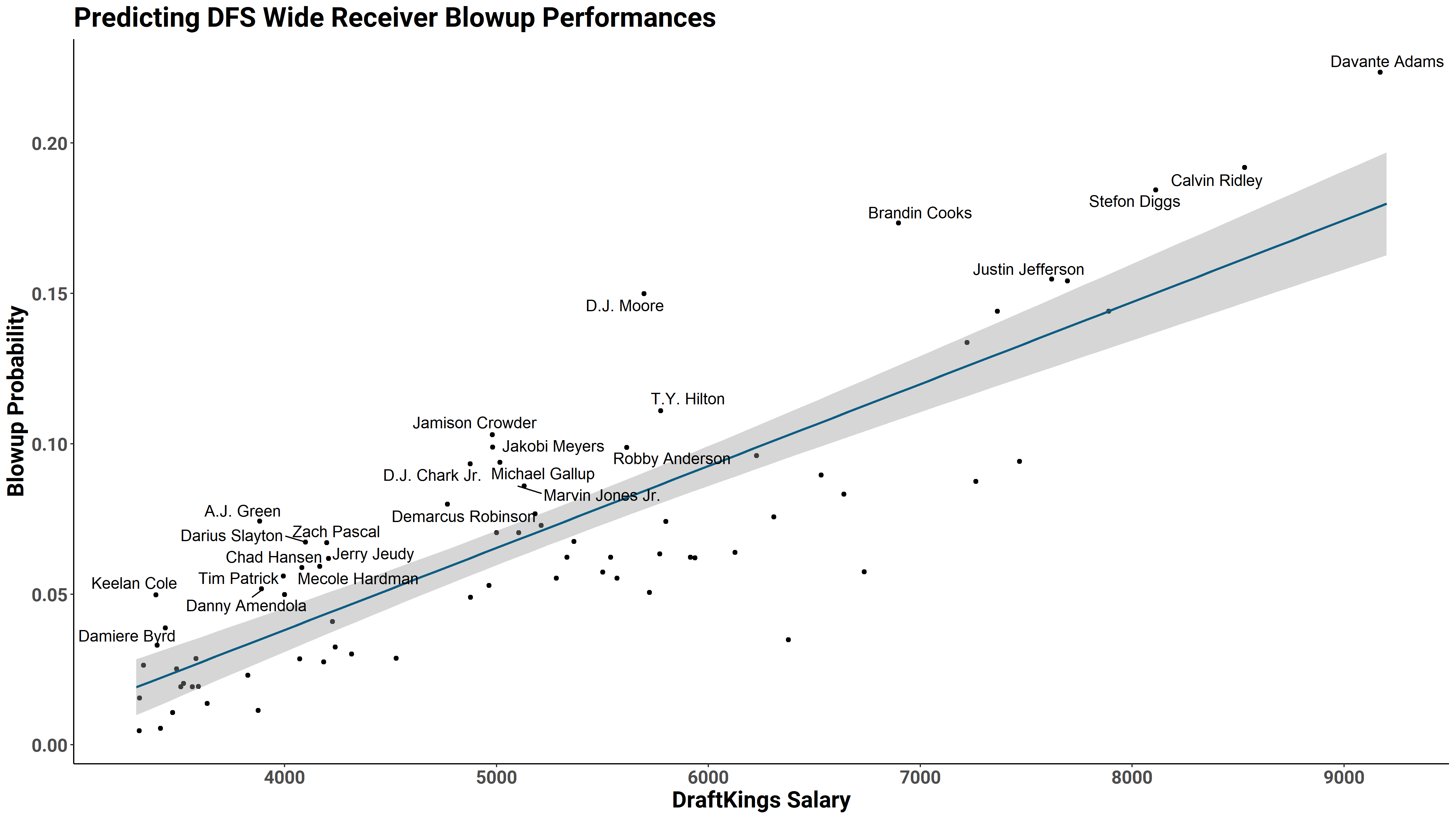 Adams is back to his rightful spot as the top option in our wide receiver blowup model. It’s obvious that he offers unmatched floor and ceiling outcomes among DFS wide receivers. Motivation exists, too, as the Packers need to win to lock up the No. 1 seed in the NFC.