The fantasy options most helped by their division

Tuesday in this space, I looked at players whose fantasy performances in 2017 were most negatively affected by the division they played in. Really, it was an excuse to look at Russell Wilson and tell a foreboding tale about the 2018 season before him, in a division that is becoming ever more intimidating as the 49ers and (especially) the Rams load up on defensive pieces.

Still, there’s value in knowing which players are in the worst situations based on which teams they play a total of six times a year. And it goes both ways, so today, here’s a look at the players whose fantasy numbers were most helped by their divisions in 2017.

Dalton reached 20-plus fantasy points twice in 2017 — once against the Browns and once against the Ravens. Of course, he also had his worst, maybe-it’s-time-to-bench-him game in the division as well, with his no-touchdown, four-interception outing in a 20-0 shutout against Baltimore in Week 1. Take that game out of the equation, and Dalton’s AFC North scoring average goes to 20.2 fantasy points a game. That pace over the full-season would have left Dalton as the 2017 No. 2 QB. The Browns and Ravens were both bottom-10 in the league in PFF pass-rush grades, which, for a quarterback who shows a 20-point difference in passer rating when pressured vs. not, has to have been a boon to Dalton. Considering none of the Bengals’ AFC North brethren has done much on the pass-rush front this offseason, Dalton could still see the same benefit in 2018.

No. 32 in PFF pass-coverage grades in 2017: New York Jets. No. 31: Miami Dolphins. Taylor struggled against the Patriots, putting up 18 fantasy points total in two outings, but against the other two AFC East opponents, he averaged 21.8 fantasy points a game, feasting on two struggling pass defenses. The Jets made a few moves to bolster their pass defense this offseason, but neither team is likely to make huge jumps forward in those rankings. Of course, Taylor is gone from Buffalo now, leaving the job to AJ McCarron and/or a fresh-faced rookie. If whoever starts for the Bills proves to have any sort of competence, his games against the Dolphins and Jets could be sneaky productive outings in 2018.

Henry was famous for his late-game heroics in 2017, which explains a lot of the production here as well — the Titans went 5-1 against the AFC South, meaning Henry got more chance to display those late-game numbers against his division than outside it, where the team went 4-6. Considering the Jaguars are likely to enter the 2018 season as one of the Super Bowl favorites and the Texans get healthy options back all over the field, Henry’s best chance at continuing that fourth-quarter dominance in 2018 is going to be against the Colts, who … well, they aren’t going to be great. But this appears to be more of a matter of wins vs. losses in 2017, not a particularly amenable division.

Three of Bell’s four biggest games of 2017 (Week 4 against Baltimore, Week 13 against Cincinnati, Week 14 against Baltimore) all came inside the AFC North — though, to be fair, so did his worst game, Week 1 against Cleveland. The big games all came about differently, too — Week 4 was a monster rushing day, Week 13 was more receiving, and Week 14 was really about the touchdowns and not the yardage. Considering even Bell’s “bad” subset, outside the division, would have produced a fantasy average that would have made him the No. 3 RB over the season, I suggest not looking too deeply for what makes the elite games elite and just enjoying his overall production. 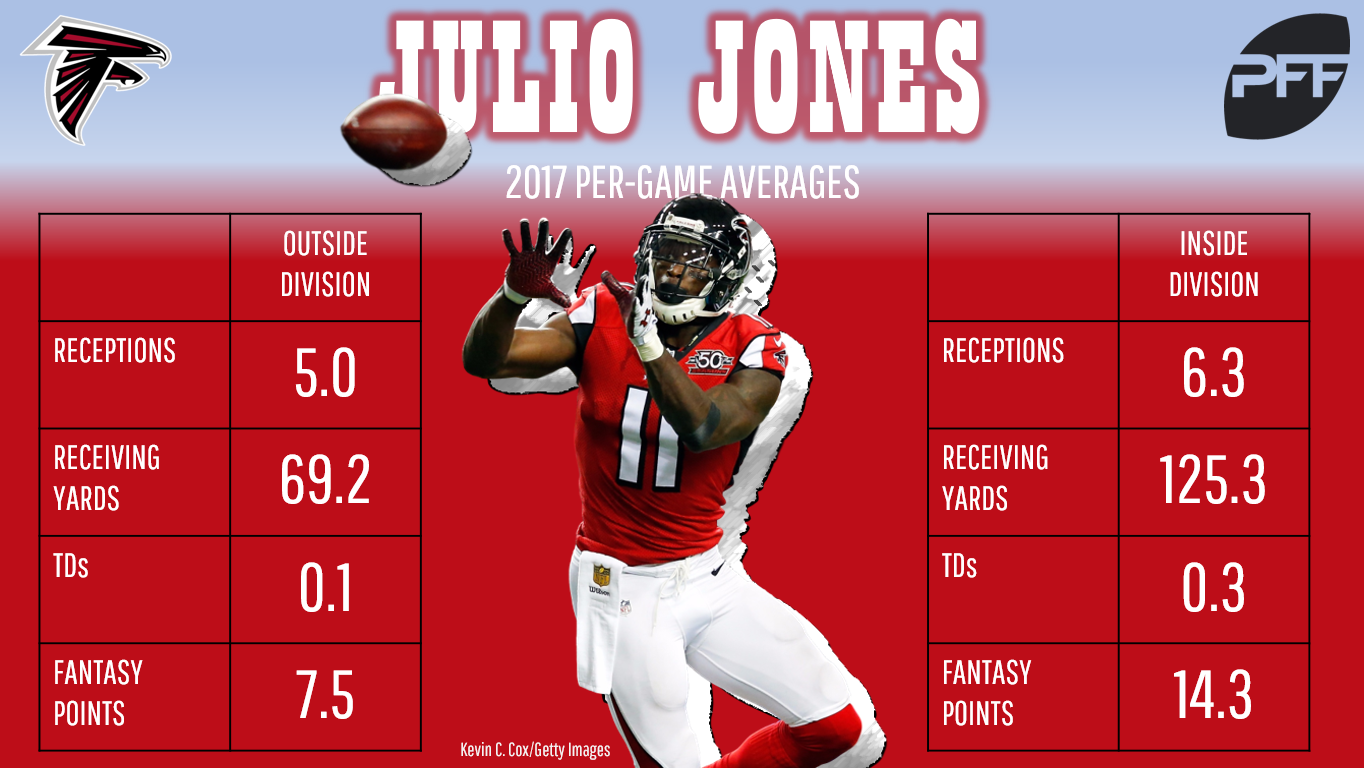 Jones scored three touchdowns in the 2017 regular season — two came against the NFC South. Jones had four hundred-yard games in 2017 — three came against the NFC South. In fact, more than half of his season yardage (752 vs. 692) came in just the six NFC South games. A big chunk of that was a single game, as Jones’ Week 12 game against Tampa Bay featured 253 receiving yards, 2 receiving touchdowns, and 15 rushing yards to boot, but even without that game his intradivisional average would have been 33 percent bigger than his average outside the division. Frustratingly for Jones, the Falcons only played one in-division game before Week 12, finishing with five of six games against NFC South opponents, so his fantasy owners got the frustrating parts of his season out of the way early and were potentially eliminated from contention by the time his monster games came around. The Panthers and Buccaneers both struggled defending the pass a year ago, and neither has made massive changes to their secondaries this offseason (though the Bucs' pass-rush could take a massive leap forward with the arrivals of Vinny Curry and Jason Pierre-Paul), so expect Jones to experience much the same benefits again.

Jones has feasted on the Packers during his two years in Detroit. His lines:

Three of Jones’ other six touchdowns in 2017 (and therefore six of his nine total) came against the NFC North. The Packers have been the only truly subpar pass defense in the division, but with Jones and Golden Tate combining their attack, defenses have had split attentions, and Jones has benefited. Pending what Green Bay does the rest of the offseason and in the draft, expect Jones’ dominance at least over the Packers to have a shot at continuing.

In standard scoring, Travis Kelce averaged 10.2 fantasy points a game. Gronowski averaged 9.6 outside the AFC East, and 17.3 points inside it. (Admission: I didn’t count Gronkowski’s Week 17, when he played the first half but wasn’t targeted, against him. If I did, his average becomes 13.6.) Five of Gronkowski’s eight touchdowns in 2017 (including both of his multi-score games) came inside the AFC East, as did 35 percent of his total yards — which is more impressive when you consider that Gronkowski missed one Dolphins game and got a zero in that second Jets game. However, like Le’Veon Bell, I’m not willing to say this is an AFC East thing so much as it’s a Rob Gronkowski thing. This doesn’t move the needle on his 2018 valuation.