The case for Mark Andrews as a sleeper fantasy tight end

There’s no super-secret threshold to unlock that guarantees a player is relevant in fantasy football. Or if there is, we haven’t unlocked it yet, and you’d think with the amount of research done into this game, we would have. That said, for tight ends, 2.00 yards per route run appears to be a pretty safe place to mark territory.

In the last decade, there have been 36 tight end seasons with at least 40 targets and a YPRR of at least 2.00. That’s about three and a half a season, which feels appropriately elite. With most stats, you expect mostly big names and a fluke or two. For example, set a threshold of 3.50 yards after contact per attempt for running backs. That’s approximately as elite as 2.00 YPRR for tight ends, and you get mostly big names there as well. But in the last five years, Jalen Richard, LeGarrette Blount, and Kenneth Dixon have all had qualifying seasons over that threshold. Fine running backs? Sure! But it’s not a mark of eliteness like 2.00 YPRR can be for tight ends.

Check out the 36 names (min. 40 targets) over the last decade (players from 2018 are in bold). You can check these numbers out for yourself with a subscription to PFF.

Who are the flukes in there? I’ll grant you 2010 Marcedes Lewis (having his career year) and probably 2016 Vernon Davis (well past his prime in Washington). Otherwise, the closest things to flukes before 2018 were 2010 Jared Cook, 2009 Brent Celek, 2011 Jeremy Shockey, maybe 2009 Owen Daniels. And if those are the low-water marks for a metric, I’ll take it.

In other words, there is a chance a tight end will fall on his face after a season of 2.00 yards per route run. But not a big chance. 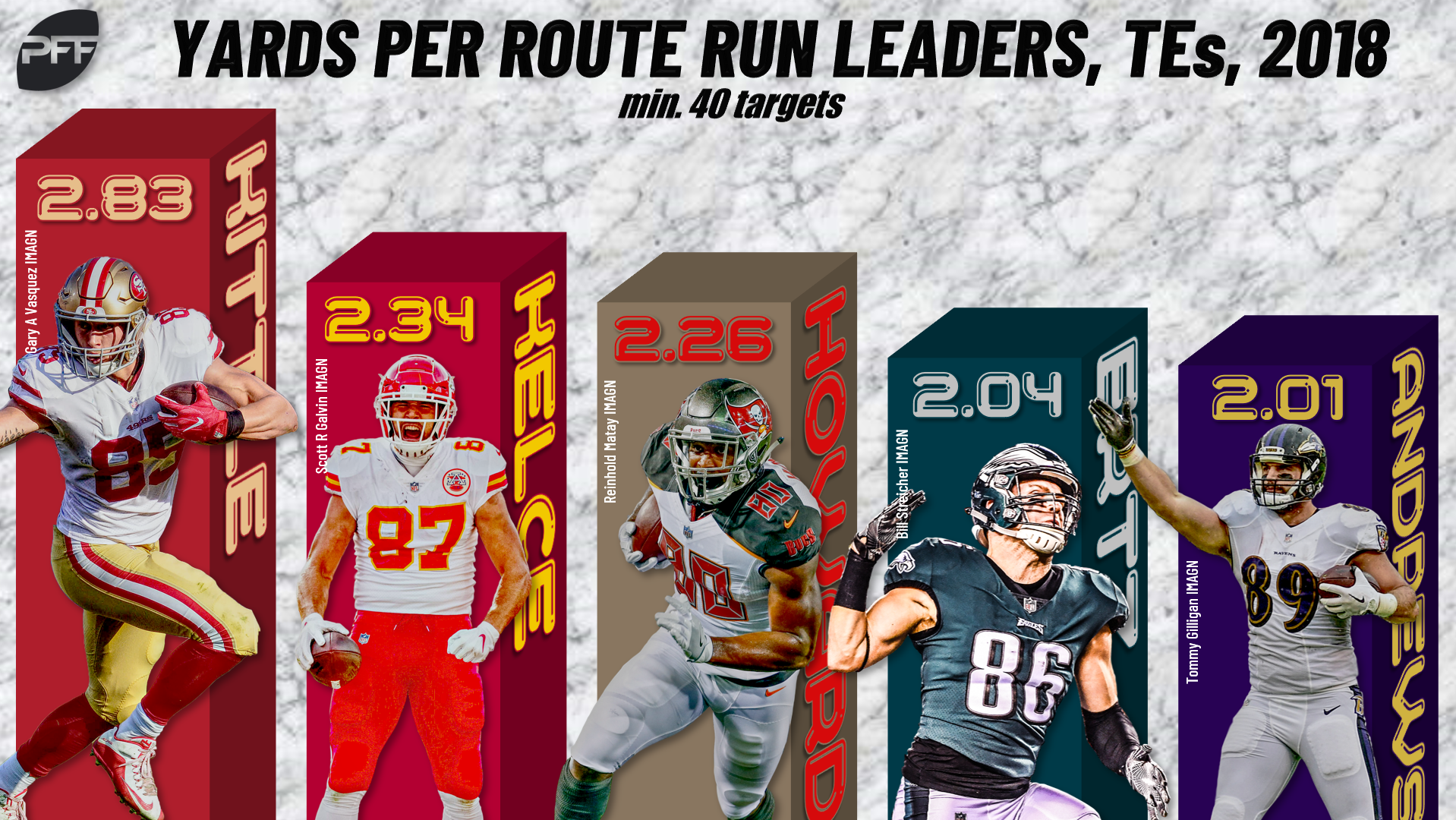 So, the 2018 names. Of the five names, three are our consensus top-three tight ends for 2019 (George Kittle, Travis Kelce, and Zach Ertz), while a fourth is one of the most popular breakout candidates at the position (O.J. Howard, who I have already written about here and here). None of the four appears to be anything resembling a fluke.

Which brings us to the fifth name. Mark Andrews managed 2.01 yards per route run as a rookie across 48 targets, putting up 552 yards despite playing half his season with a quarterback in Lamar Jackson who was nigh-on allergic to throwing passes. And Andrews actually improved with Jackson — his YPRR with Joe Flacco at quarterback was 1.36, but it ballooned to 3.24 under Jackson. Part of that was Andrews’ propensity for long plays, as he and Kittle were the only tight ends with multiple plays of 60-plus yards. But Andrews was also plenty productive overall — his PFF receiving grade of 78.0 was the eighth-highest for a rookie in the PFF era, and the list is populated by plenty of big, non-fluke names.

Obviously, Andrews is going to be a question mark in 2019, considering the number of tight ends on his roster (the Ravens still have Nick Boyle and Hayden Hurst on the roster) and Jackson’s lack of passing prowess. But he’s shown the ability to be a productive tight end. If you are waiting at the position in fantasy drafts, Andrews could be a sneaky play in late rounds for 2019.