The best fantasy QB options to stream for Week 4

Each week in this space, we’ll highlight the best quarterbacks to pick up and stream in fantasy football. With a few more underwhelming performances by notable quarterbacks this past week, you may find yourself in a position where you need a streaming quarterback option to replace the typical starter. If this situation sounds familiar, worry not as you have come to the right place.

Before moving on to week 4, let’s take a look back at last week to see how our streaming options fared.

Notes: Both Allen and Stafford had poor fantasy showings given promising gamescripts, which is especially frustrating since both of their respective teams won thanks in part to well-planned offenses. … Winston and Trubisky both turned out to be tremendous streaming plays, both finishing within as QB1s. … While Rudolph probably didn’t win you any games, he indeed held his own as a mid-tier QB2 in deep leagues. … Garoppolo was the biggest bust of the group, scoring just 10.4 points against the same Pittsburgh defense that has allowed 28.3 fantasy points per game to opposing quarterbacks.

So far this year, quarterbacks playing against the Dolphins have posted the most yards per passing attempt and the most passing touchdowns through three games. In what could be an ugly matchup for Miami, Rivers and company should feast. While Rivers may not be available in your league, if you’ve been benching him waiting for the right matchup, this is it.

Winston and company are heading to LA to face the Rams this week in what should be a high-scoring game. Although he has just five passing TDs so far, Winston is in line to get a few more as he leads the league with 11.2% of his targets going into the endzone. With an average depth of target of 11.7 yards, Winston also is among the top-five quarterbacks in terms of throwing the ball downfield. All of these factors combined make Winston a great play this week in almost any format. 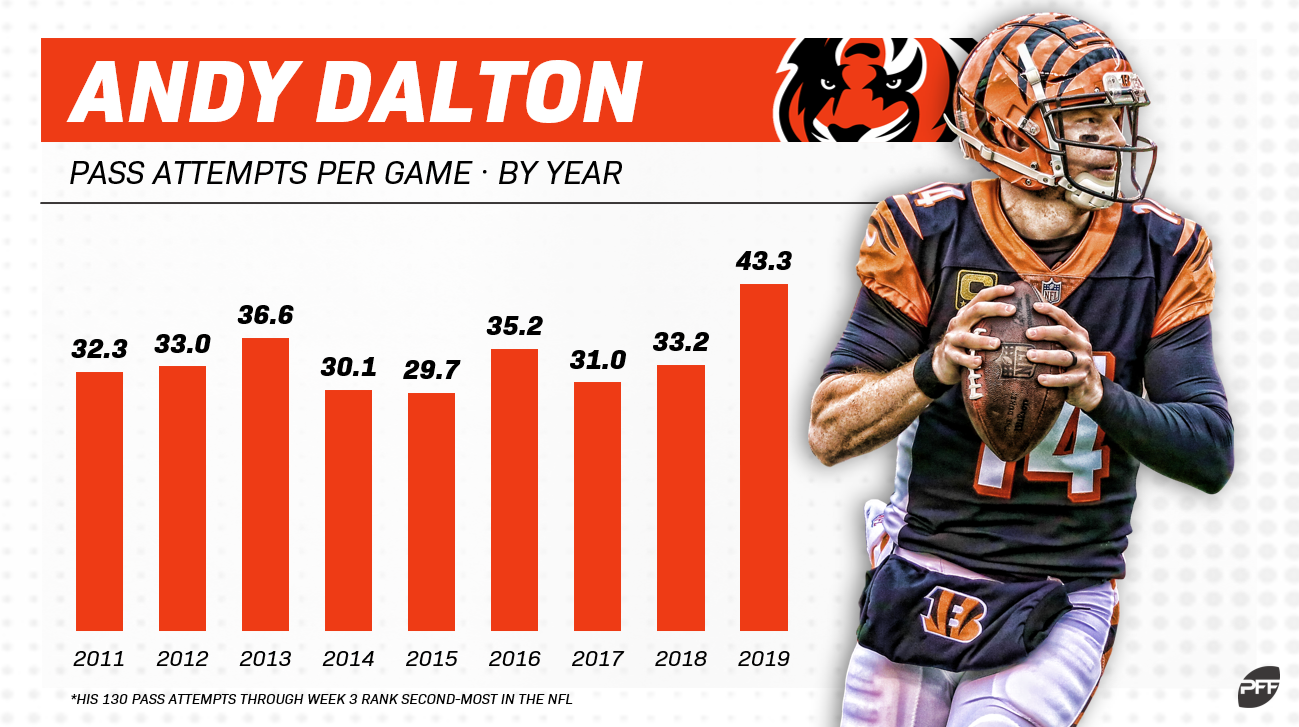 Garoppolo wasn’t able to capitalize against a porous Pittsburgh secondary in week 3, but Dalton and the inspired Bengals should fare much better this week. Through three weeks, Dalton has thrown the ball 130 times (second-most) and has forced his way into fantasy relevance through volume alone. Although his accuracy (his adjusted completion percentage of 75.5% ranks 21st) and efficiency (his fantasy points per dropback of 0.44 ranks tied for 21st) have been lacking, his projected heavy workload will more than make up for it this week in Pittsburgh.

The jury is still out on Eli Manning’s heir, but so far so good as Jones put up 0.75 fantasy points per drop-back in Week 2. The rookie should be licking his chops as he is set to face a Washington defense that has allowed the third-most passing touchdowns in a game where Saquon Barkley’s injury should lead to a more substantial passing attack. Jones may not be an every-week of starter in his rookie season, but this game script is too good to pass up.

While we shouldn’t expect Drew Brees’ level of production out of the former Vikings starter, Bridgewater was able to get the ball in the hands of his playmakers in his debut with the Saints, and as long as he can do that, he will be fantasy relevant. In what should be a down-to-the-wire game against the Cowboys, Bridgewater should be passing early and often. While I’d steer clear of him in most leagues, Bridgewater could be an impact play in 2QB leagues or at least a viable starting option in 14- to 16-team leagues.

In his debut as the Steelers starting quarterback, Rudolph looked the part of an NFL quarterback. Similar to Bridgewater above, if Rudolph can continue to get the ball in the hands of James Conner and JuJu Smith-Schuster, he should have a big fantasy day against the division rival Bengals who have allowed six touchdowns compared to just two interceptions. In a game where the Steelers could often be trailing, Rudolph should get plenty of opportunities to make plays, and more often than not, more opportunities lead to more fantasy points.