The best fantasy QB options to stream for Week 2

Each week in this space, we’ll highlight the best quarterbacks to pick up and stream in fantasy football in leagues of any size. Fresh out of your first game of the year, hopefully you’ve got your season-long starting quarterback in place. If not — whether you lost your guy to injury (sorry Nick Foles managers) or have a newfound doubt in your QB1 (looking at you, Baker Mayfield managers) — this weekly piece is here to provide you a streaming option at quarterback.

After finishing his first game of the season with a perfect passer rating, Prescott should be a hot name on the waiver wire this week. We probably should not expect four touchdowns out of him weekly, but against a bewildered Redskins defense that collapsed at halftime last week, Prescott just might start the season with two dominant performances. Another thing that always makes Prescott appealing is his knack for finding the end zone on his feet. In 2019, Prescott trailed just Josh Allen with six running touchdowns on 19 red zone rushing attempts.

Rivers has firmly established himself as a career-long solid fantasy option. Rarely is he a top play, but his high floor always has him in the QB1/QB2 conversation. In what should end up being a game with plenty of passing opportunities, especially with no end in sight for the Melvin Gordon holdout, Rivers is a sneaky-good play in Week 2. As the ninth-most-expensive quarterback in DraftKings, a stack with Keenan Allen could be the base of a winning cash game lineup.

While Allen certainly could have played better against the Jets in Week 1 (his 52.3 overall grade ranked 24th of 28 qualified quarterback), he showed the same ability to run the ball when facing pressure that made him such a good streaming option in 2018. In Week 1, Allen led all QBs in rushing attempts, yards, and touchdowns, while finishing the week as the 13th-highest-scoring quarterback. He did all of this despite throwing two costly interceptions and suffering four dropped passes. In Week 2, Allen will head to New York to face the same team that just allowed Prescott to throw four touchdowns. Allen is a particularly enticing option for DraftKings where his salary is the 17th-highest among quarterbacks in the main slate. 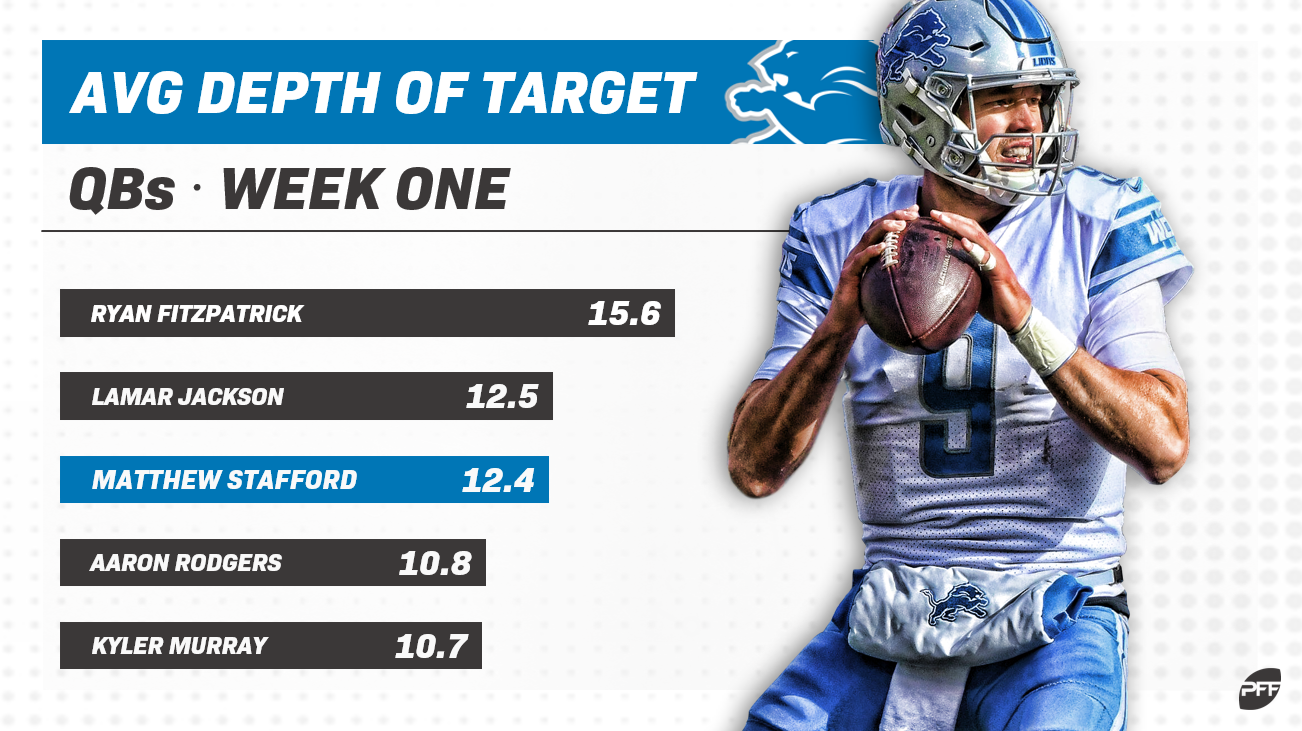 After finishing Week 1 as a top-five fantasy QB, it may come as a surprise that the 11th-year vet is available in most leagues. After throwing a whopping 13 targets to Danny Amendola, it appears Stafford has found the go-to guy he’s been missing since Golden Tate was traded to the Eagles last season. Another promising sign for prospective Stafford owners is his Week 1 average depth of target of 12.4 yards, good for third on the week. There’s no better way to get yardage than to throw the ball downfield, and Stafford showed he’s not afraid to do just that. For GPP players, a Stafford/Amendola stack provides a low cost, high-upside option that could payoff big.

While no one confused him for Andrew Luck, Brissett looked surprisingly solid in his first start as “the guy” in Indianapolis. Against the Chargers, a solid 11.1% of Brissett’s throws went into the end zone, good for fourth-most among Week 1 starters through Sunday night. With an aDOT of just 6.4 yards, Brissett relied heavily upon his receivers to do the heavy lifting, and as long as T.Y. Hilton is one of those receivers, that is exactly what we want him to do. With 5.9 yards after the catch per reception in 2018, Hilton is among the most dangerous players in the game with the ball in his hands so as long as he continues to get targets, Brissett will benefit greatly. Although the upside is there in deep leagues, Brissett’s low floor makes him a poor start in most DFS formats.

In his first game of the 2019 campaign, Mariota and company beat the new-and-improved Cleveland Browns by four scores and were clearly the better football team. Even in a run-heavy situation as such, Mariota found his way to 24 pass attempts which gained 248 yards and three touchdowns. In a game that should have a similar gamescript, look for Mariota to do more of the same against the same Indianapolis Colts that just allowed Rivers to pass all over them. While Mariota seems somewhat expensive on FanDuel, he is a budget option on DraftKings, where he comes in as the 21st-most-expensive quarterback.