The best fantasy QB options to stream for Week 11

Each week in this space, we’ll highlight the best quarterbacks to pick up and stream in fantasy football. Today, we’re looking ahead at Week 11.

Patrick Mahomes is back, ladies and gentlemen. After missing a few games to injury, the reigning MVP returned to action and did not disappoint. Elsewhere around the league, Jeff Driskel played admirably in place of an injured Matthew Stafford, Kyler Murray looked like a first-round draft pick, and the season of Kirk Cousins continued.

Looking back at our recommended Week 10 streaming quarterback options, Philip Rivers disappointed in a big way, posting under 10 points in a loss to the Oakland Raiders. … Josh Allen, on the other hand, finished the week as the sixth-highest-scoring quarterback. … Jimmy Garoppolo and Brian Hoyer both finished among the worst-scoring fantasy quarterbacks even with promising gamescripts, no doubt frustrating many-an-owner. … While Kyle Allen made for a solid option in deeper leagues, Daniel Jones absolutely stole the show — for fantasy purposes at least — with a four-touchdown day against the crosstown rival New York Jets.

Moving on to Week 11, with the playoffs rapidly approaching, selecting the correct streaming quarterback option could be the difference between a playoff push and a lost season. With just four teams on a bye this week, the waiver wire should offer a few better options for us to choose from, which will be especially beneficial to Russell Wilson or Aaron Rodgers owners. Also, new owners of Jones will have to wait as the New York Giants will have a bye this week along with Ryan Tannehill and the Tennessee Titans.

Unless you are rostering Patrick Mahomes, Lamar Jackson, or Drew Brees, I want you to go pick up Allen and lock him in as your starter for the week. You’ll thank me later. We aren't buying into the Falcons shutting down the Saints defense last week as the new normal, and instead we'll continue to roll against a Falcons defense that allowed 20-plus points to opposing quarterbacks in six straight games Weeks 1-7. 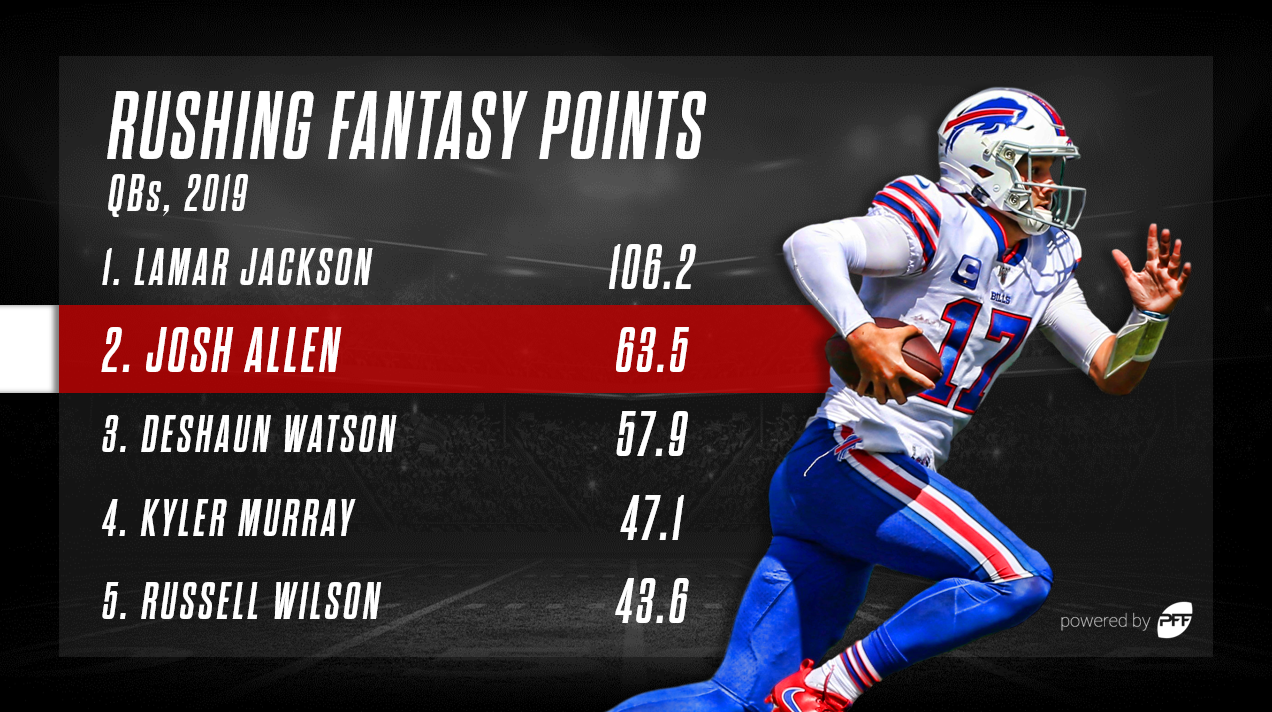 It is honestly unbelievable that Allen is still available in over 20% of leagues. Allen has been among the top-10 quarterbacks in terms of fantasy points per dropback and among the top five in terms of fantasy points per rushing attempt. As if that wasn't enough of a reason to start the young signal-caller, he is also playing Miami this week. Don't overthink this one.

After seeing enough of the Brian Hoyer Project ®, fantasy owners and Colts fans alike can’t wait to see their starter return to the field. Brissett has been very solid this year with a respectable 0.51 fantasy points per dropback, a mark that is good enough to tie for the ninth-most in the league among qualified quarterbacks. If Brissett can go, feel good starting him. If not, avoid Hoyer like he avoided his pass-catchers last week. Sorry, too soon?

Mahomes isn’t the only former MVP returning the field this month as Super Bowl LII MVP Foles is set to make his second appearance as a Jaguar in Week 11 after suffering a clavicle injury in Week 1. He will have his work cut out for him against the Indianapolis Colts, who have allowed just 15.4 fantasy points per game to opposing quarterbacks this season. Foles should be available in most leagues, but unless you’re in a pretty deep league, there are likely better options, but if he’s atop the waiver list, Foles should make for an intriguing play.

Unfortunately for Rudolph — and especially for his fantasy faithful — his pass-catchers had a case of the dropsies this past Sunday against the Los Angeles Rams. To make a positive out of the situation, however, thanks in part to said drops, Rudolph is available in almost every fantasy football league there is. While Rudolph and company may bring nightmares of seasons past to #SteelerNation, his fantasy value is on the way up and he needs to be rostered in all deep leagues, especially dynasty and keeper ones. The Browns losing to the Steelers is as regular of an occurrence as you’ll find in the NFL, so stream Rudolph this week with confidence.