Each week in this space, we’ve been taking a look back at Sunday’s games to find five of the most interesting or most important stats for fantasy football owners. With 15 of 16 games from NFL Week 16 in the books, here are the five stats you need to know:

1. Aaron Rodgers totaled 42.9 fantasy points in Week 16. That's the highest-scoring fantasy game by any quarterback in the fantasy postseason (Weeks 14-16) ever. 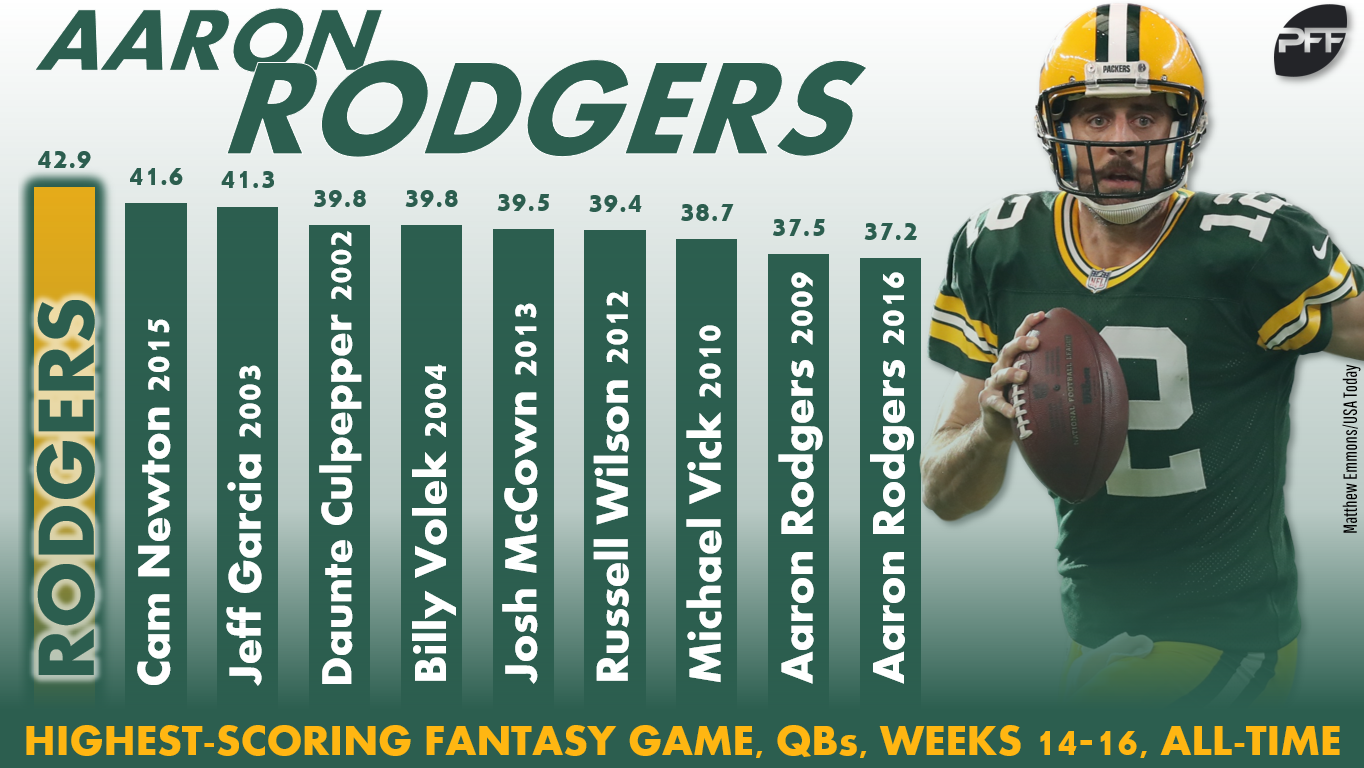 Started Rodgers in your fantasy championship? Send that man a fruit basket, he put your team on his back.

Over the past 10 seasons, among all quarterbacks to play in at least seven games, Rodgers has ranked sixth (2017), first, ninth, first, fourth, second, first, second, first, and second in fantasy points per game. He’s been a top-two fantasy quarterback in seven of 10 seasons. Outside of 2017 (skewed by injury) and 2015, Rodgers has been a top-four fantasy quarterback in every year of his career. However, 2018 was shaping up to be his worst season yet. He came into the week ranking just 11th in fantasy points per game (19.2). After his monstrous Week 16, he now ranks fourth (20.8).

Preface for stats #2-5: If your commissioner set your league up right, Week 17 is a meaningless week for you – and is not your league’s fantasy championship game. That’s because too many teams have nothing to play for this week. For instance, the Cowboys have clinched their division with a 9-6 record. It makes sense for them to bench Dak Prescott, Amari Cooper, and Ezekiel Elliott. While they might not bench these players outright, it’s unlikely they play more than few drives. If so, then that incomplete game will later skew season-long fantasy averages (as it did for some players last year). This is also why, when looking at season-long stats, I sometimes strip out Week 17 and only include fantasy-relevant weeks (Weeks 1-16). For our next four stats, we’re placing each position’s most impressive 2018 fantasy season (Weeks 1-16) in a larger historical context. 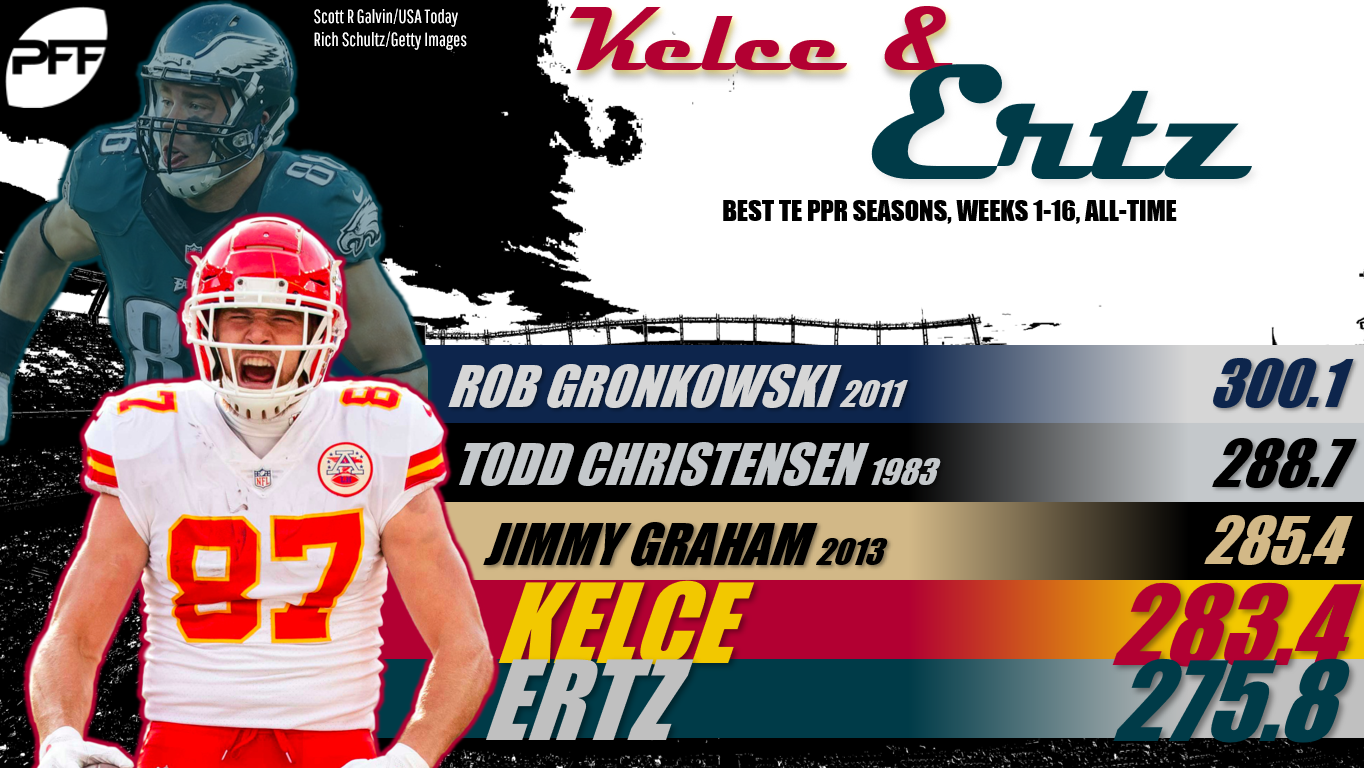 4. In each of the past four seasons, Antonio Brown has led all wide receivers in fantasy points during the fantasy season (Weeks 1-16). In 2018, Brown ranked second, 5.9 total fantasy points behind Adams. 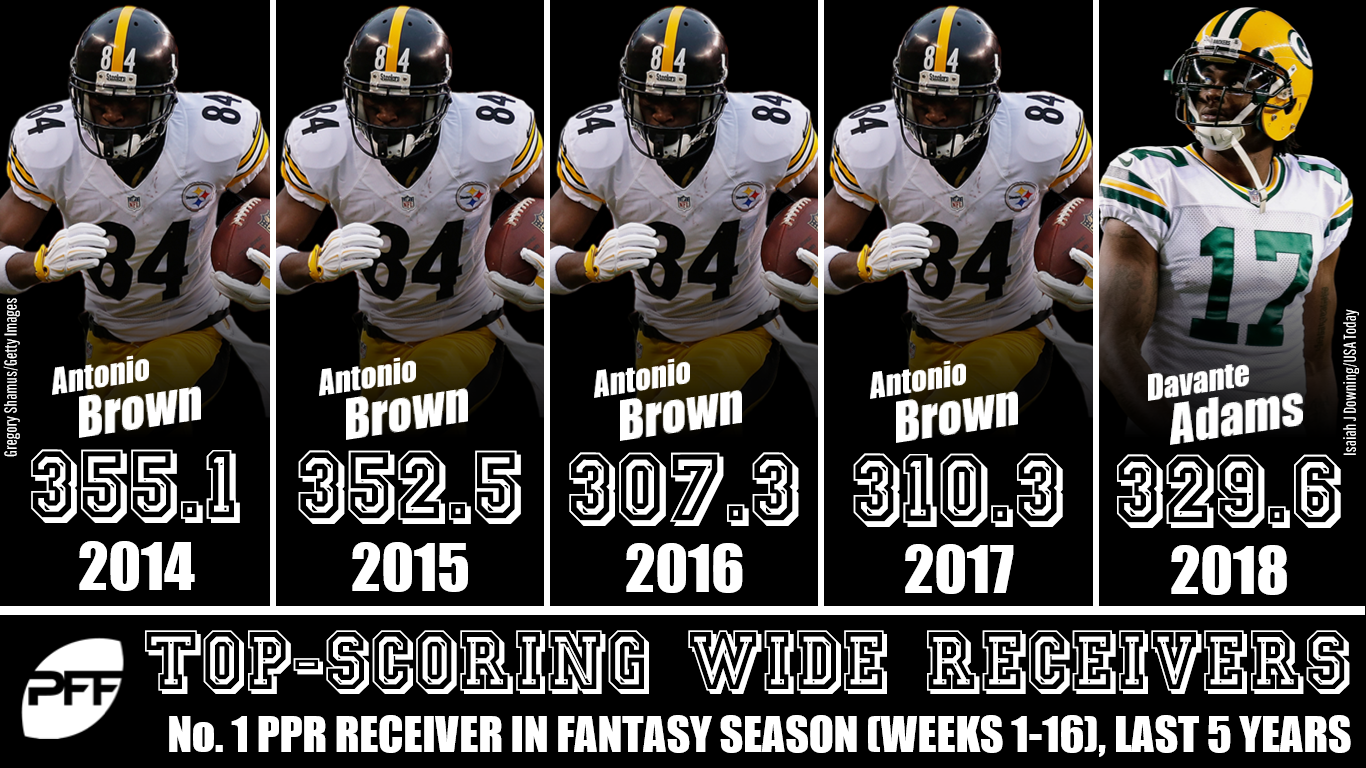 Could this be an indication that there is a new top wide receiver to own for fantasy? Is Brown (30 years old) officially on the downslope of his career? I think, possibly. Not only has Brown’s efficiency numbers been trending down, but now he has JuJu Smith-Schuster breathing down his neck and trying to cement himself as the team’s new No. 1. Smith-Schuster currently has 93 more yards than Brown, on 13 fewer targets. Schuster also came into the week ranking as our 14th-highest-graded wide receiver, while Brown ranked 31st (75.0), which would be the lowest grade of his career.

Who could have seen this coming? (Raises hand and does a victory lap.)