No matter how long you’ve playing fantasy football, there are always some lessons to learn. The game is evolving, and your fantasy strategies should follow suit. As we start our review of the 2018 season and begin to look ahead to 2019, it’s important to keep an open mind.

Over the past few weeks I’ve offered up some of the lessons I’ve learned or ones which I was reminded of during the 2018 campaign at quarterback , running back, and wide receiver. Let’s wrap up the discussion by taking a look at the tight end position.

George Kittle etched his name into the record books with a new mark for receiving yards at the position and a large chunk of those were via yards after catch. 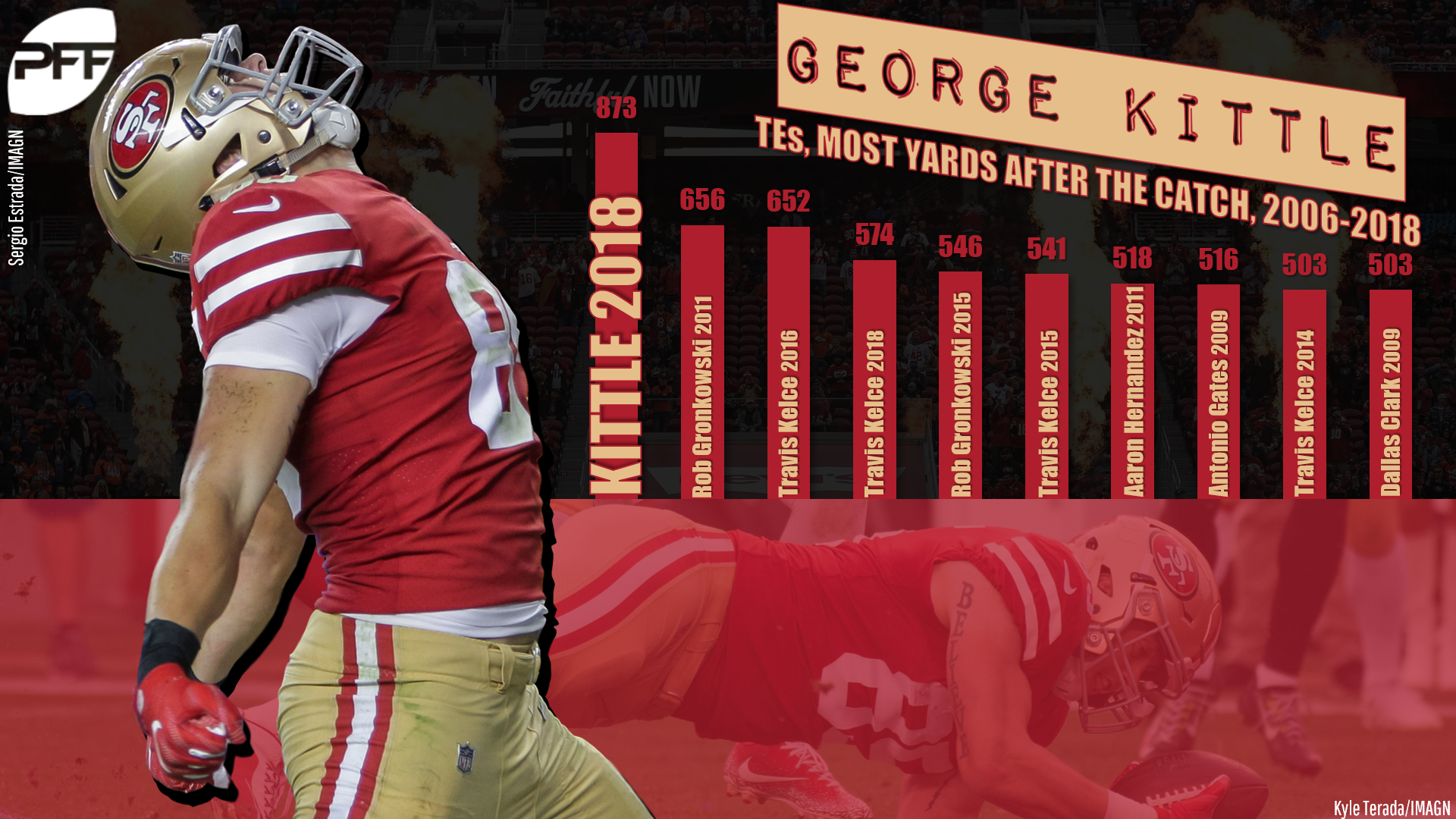 Kittle’s YAC mark of 873 is the most by tight end during the PFF era and was 299 yards more than the next closest tight end on the list from 2018, Travis Kelce (574). Those yards after catch accounted for 63.2% of his total receiving yards during his record-breaking campaign.

In total, nine of the top 12 fantasy tight ends this past season tallied more than 30% of their receiving yards via yards after catch. Kittle, Kelce, Vance McDonald, David Njoku, and Jared Cook all finished inside the top-12 in PPR points and that also averaged over 5.0 yards after catch per target during 2018.

For the third year in a row, Kelce was the top PPR fantasy producer at the position. Ironically, the last tight end to accomplish that feat also wore a Chiefs uniform, as Tony Gonzalez accomplished it at the turn of the century (1999-2001). Since 2015, Kelce leads all tight ends with 4,374 receiving yards and 27 touchdowns. 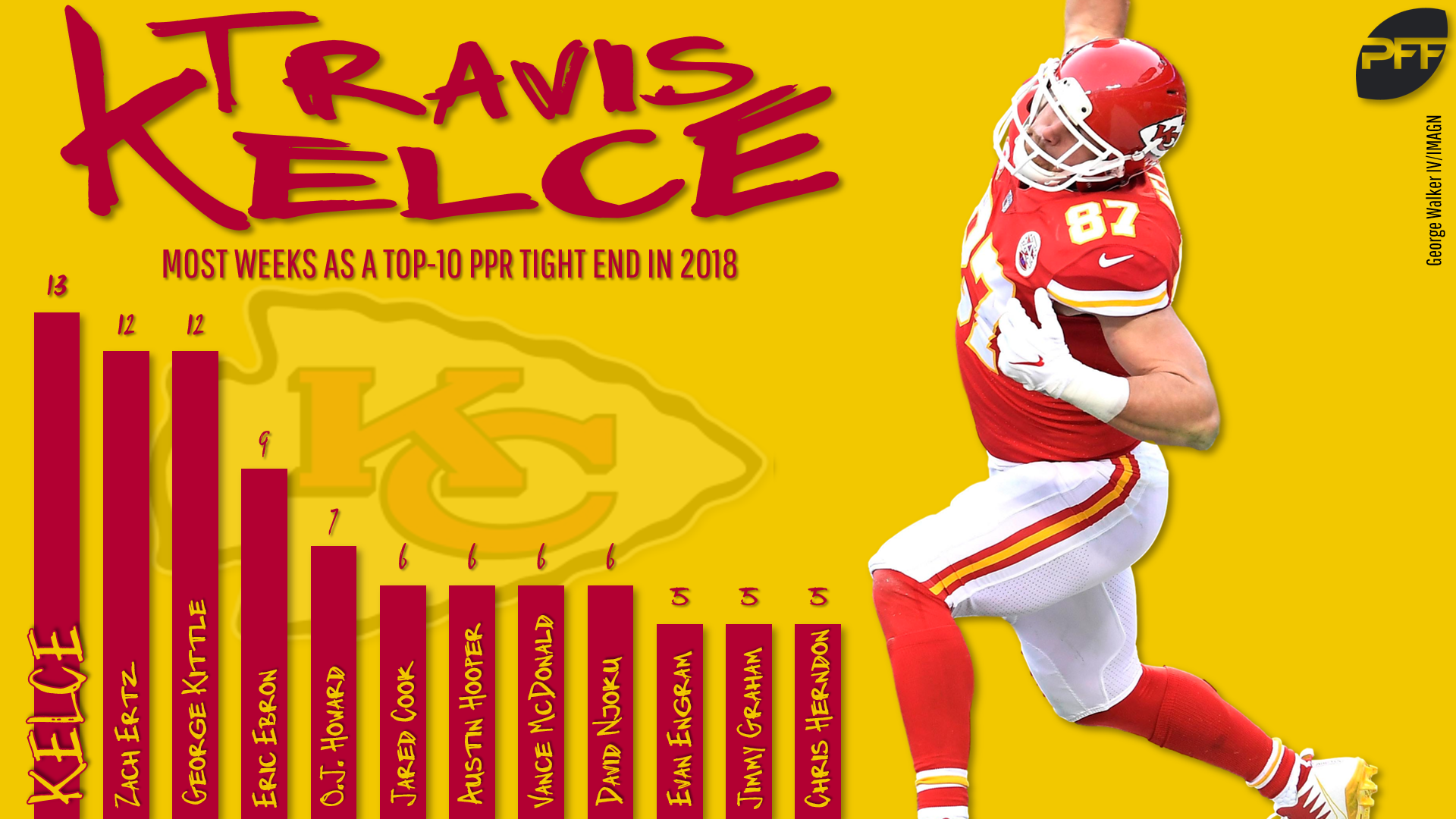 The key to Kelce’s fantasy dominance has been consistency. He finished inside the top 10 at tight end in 13 of his 16 contests this past season. Outside of Zach Ertz (12), Kittle (12) and Eric Ebron (9), no other TE managed to land inside the top 10 in 2018 in more than seven weeks.

With Patrick Mahomes under center for the long haul in Kansas City expect the 29-year-old Kelce to keep producing at an elite level for years to come.

Retire Gronk and Graham, even if they don’t 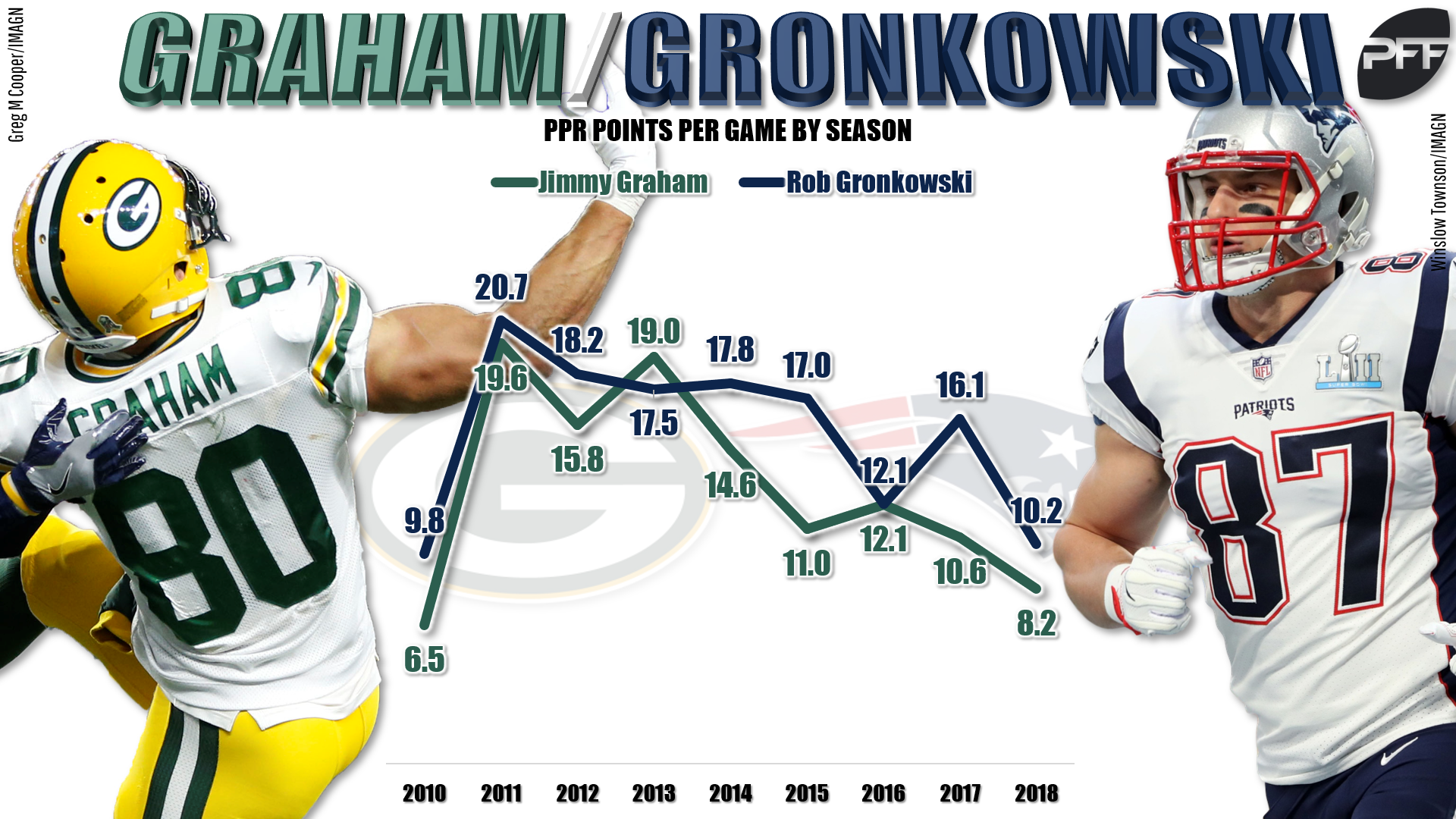 Rob Gronkowski only missed three games due to injury in 2018, but his 10.2 PPR points per game were his lowest mark since his rookie campaign in 2010 (9.6 PPG). With a late-second round ADP this past summer, Gronk proved to be one of the bigger early-round busts.

Another tight end that failed to live up to expectations was Jimmy Graham, who after landing in Green Bay with Aaron Rodgers flew off the board with a 5.04 ADP/TE4. The veteran mustered just two touchdowns and wound up as TE12 on the season despite playing in all 16 games. He played through a thumb injury late in the season that definitely hindered his production.

It remains to be seen whether either of these players will continue their storied careers in 2019. Gronkowski especially has hinted at retirement. Even if these guys do return for another season, fantasy owners need to stay clear as they’ll almost certainly be overvalued.

Landing on a new team doesn’t always turn out to be a positive (see Graham above), but a fresh start definitely elevated Ebron’s fantasy stock as he emerged a top-five tight end during his first season in Indianapolis.

In 18 games in 2018 (counting playoffs), Ebron scored an astonishing 15 times. During his first for years as a member of the Lions the tight end totaled 11 touchdowns. For the regular season he was fourth in targets (108) at the position and pulled in four of his six targets inside the 10-yard line for scores, becoming a favorite target of Andrew Luck near the end zone.

Ebron was taken as the 10th overall pick by Detroit in the 2014 draft and never lived up to the billing during his time in the Motor City. However, landing in Indy with Luck and playing in Frank Reich’s offense did wonders to resurrect his once promising outlook. 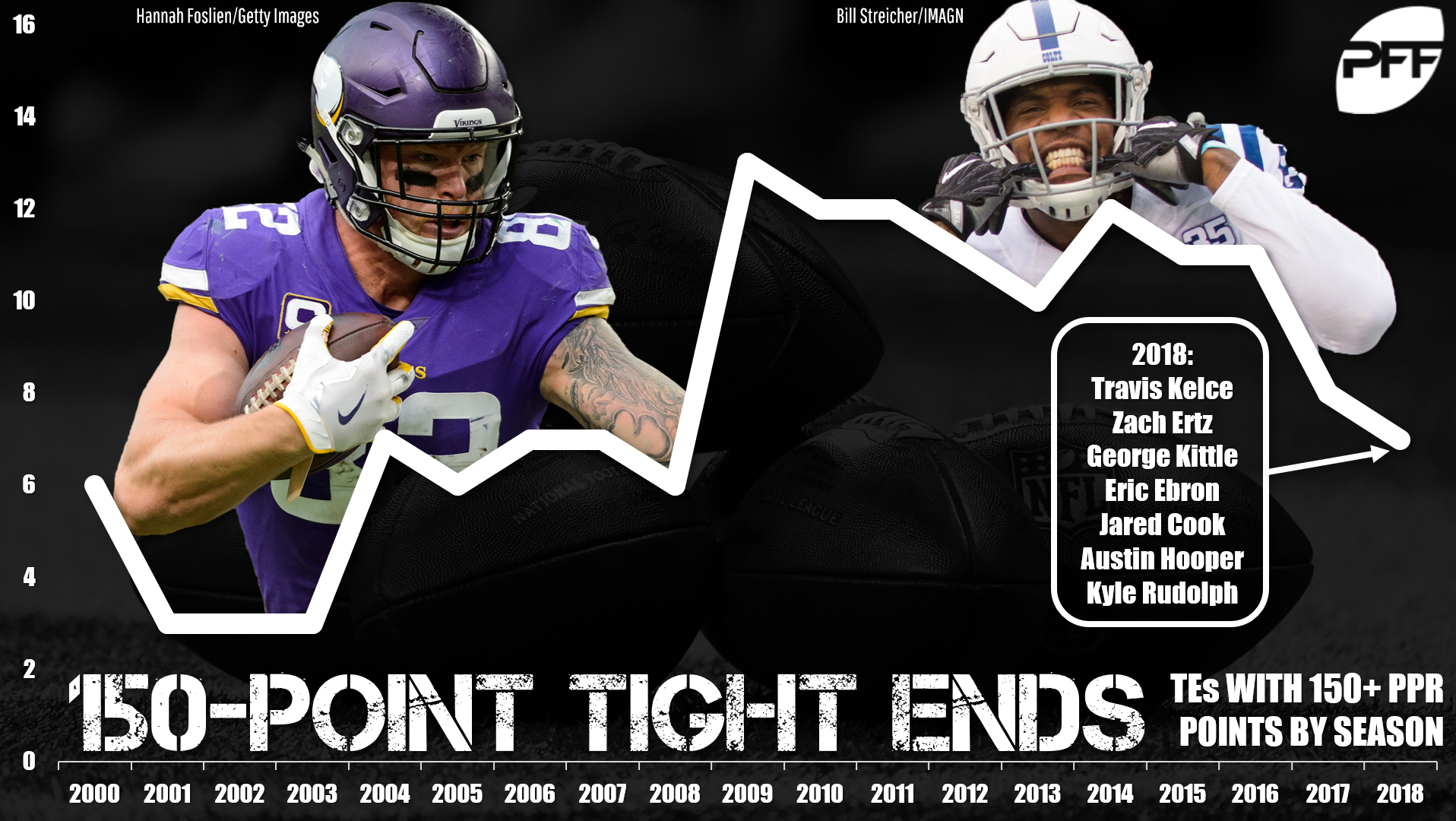 Here’s a look at how this year’s top fantasy producers at tight end stack up recent years’ leaders:

The tight end position undoubtedly has become top-heavy and the difference between Tiers 2 and 3 at the position and Tiers 4 and 5 has become as minimal as it has been in the 21st century.

With the first round of drafts becoming so running back heavy, we are seeing tremendous value the next few rounds at wide receiver. That coupled with how much far ahead of the pack that Kelce, Ertz, and Kittle are have left me as bullish as ever on going after a tight end once Round 3 hits. Early 2019 ADP suggests Kelce is an early third-round pick with Ertz going later in the round with Kittle sliding into early Round 4. I can fully endorse those players at those spots, at least in PPR leagues.

If you miss out on one of the big three then you are best served to ignore the position altogether and address it at the end of the draft right around the time you are looking at getting a defense and a kicker. You’ll find just as good of production off the waiver wire at tight end that you will be able to land with a mid-round selection.