With another week behind us, and some more fresh stats to analyze, I’m here to help you with your toughest fantasy football start/sit decisions of the week for Week 16.

Cooper is the prototypical boom-or-bust wide receiver. Over the past three seasons, he has as many games with 100-plus receiving yards (10) as he does games of 10 or fewer receiving yards. Fresh off a “bust” game last week (drawing shadow coverage from Jalen Ramsey), I’d bet on a “boom” game in Week 16.

Without Jordan Howard in the lineup, and with Philadelphia running out of more two-back sets (because of injuries to their receiving corps), Sanders has been producing like a mid-range RB1 on mid-range RB1 volume. Over the last four weeks, Sanders has played on 74% of the snaps while ranking fifth-best in both XFP per game (17.0) and fantasy points per game (19.8). With Howard unlikely to suit up this week, and in a neutral-at-worst matchup, Sanders can be safely started as a low-end RB1. 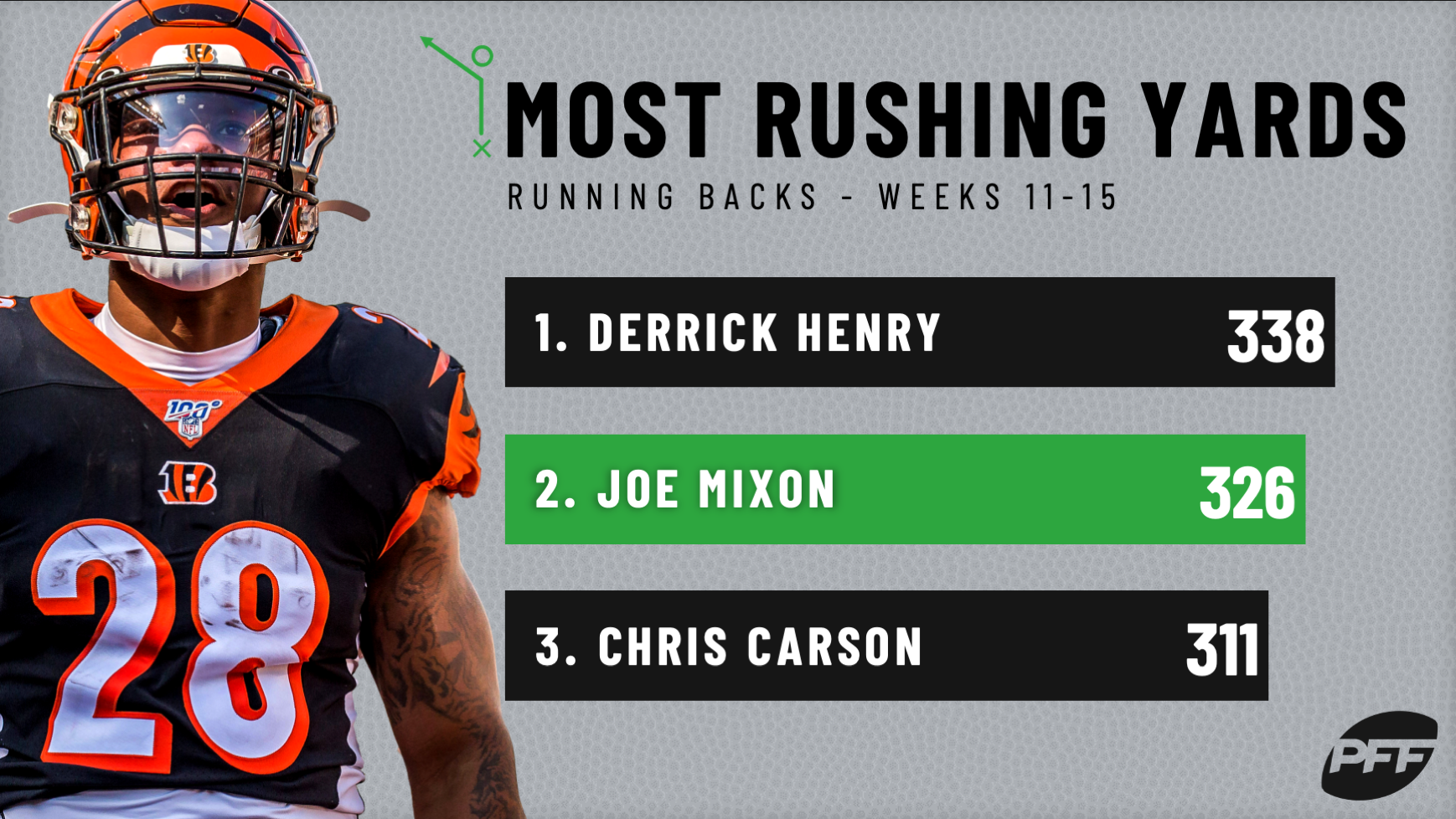 In Week 14, Mixon totaled 186 yards against the Browns, which is the most they’ve allowed all year. In Week 15, against a New England defense that ranks best in fantasy points per game allowed to opposing running backs, Mixon totaled 156 yards, the most they’ve allowed all year. Mixon now goes from a worst-possible matchup to one that’s near-ideal, against a Dolphins defense that is giving up the most rushing yards per game to opposing running backs (126.1).

Despite a league-high 24 interceptions, Winston leads all quarterbacks in passing fantasy points per game (19.9). Winston will be without both Mike Evans and Chris Godwin (who combine to comprise 54% of his passing yards this year) but his Week 16 matchup is near-ideal – Houston is giving up the fourth-most passing fantasy points per game to opposing quarterbacks, and, perhaps more importantly, Houston also ranks bottom-six in interception percentage and opposing passer rating. Without his top two options, Winston is a high-risk/high-reward play, but still should be valued as a mid-range QB1 this week.

Gerald Everett has missed three straight games with an ankle injury, and Higbee has eclipsed 100 yards in all three. Over this span, he ranks first among all tight ends and fourth among all receivers in fantasy points per game (21.8). In terms of volume, he ranks second among tight ends and fourth among all receivers in XFP per game (18.4). If Everett is out again, Higbee should be started as a top-four fantasy tight end. If Everett is active, Higbee is more of a mid-range to low-end TE1.

Brown had a big game last week, after three straight games under 40 yards, but now gets set to face the Patriots and Stephon Gilmore in shadow coverage. Considering Gilmore has shut down every receiver he’s faced, including Brown in Week 4, it’s safe to say you can leave him on your bench this week.

Golladay flopped last week in a near-perfect matchup, and now draws a nearly worst-possible matchup against Chris Harris Jr. in shadow coverage. In eight shadow games against Harris, (some of the league’s best) wide receivers are averaging just 6.6 fantasy points per game against his coverage. In this tough matchup, and still without Matthew Stafford, Golladay drops a few tiers this week (into the low-end WR2 range).

Within the same game, another young breakout wide receiver saddled with a third-string rookie quarterback draws shadow coverage from an elite cornerback. Sutton is likely to be shadowed by Darius Slay, who hasn’t been quite as effective as Harris, but is still worth a downgrade. Like Golladay, Sutton gets bumped down a tier, to the mid-WR2 range.

For seemingly the 15th straight week we’re highlighting a tight end facing Arizona. That’s because Arizona is giving up a league-high 19.7 fantasy points per game to opposing tight ends, which is 28% more than the next worst defense. If excluding Vance McDonald in Week 14 (who left the game early with a concussion), Arizona has been getting shredded by opposing TE1s over the last five weeks: 17.9 fantasy points to Ricky Seals-Jones, 23.7 to Tyler Higbee, 17.4 to Ross Dwelley, and 14.7 to O.J. Howard. Hollister should also be considered the superior option to many of these names – since Week 9, he ranks seventh in XFP per game (10.6) and ninth in fantasy points per game (11.2).

Against bottom-10 defenses (by fantasy points per game allowed to opposing running backs), Freeman is averaging 19.4 fantasy points per game. In all other games he’s averaging just 8.0. Freeman’s opponent this week, Jacksonville, ranks second-worst (or worst, if schedule-adjusted), while also leading the league in yards per carry allowed (5.31). Alongside an increase in volume, playing on 70% of the snaps over the last three weeks, Freeman should be bumped up a tier (as a mid-range RB2) in this soft matchup.

Since Taylor Gabriel’s Week 12 injury, Miller ranks seventh in XFP per game (16.8) and 11th in fantasy points per game (19.2). On-paper Miller has what seems to be a difficult matchup, against a Chiefs defense that is surrendering the second-fewest fantasy points per game to opposing wide receivers. However, in actuality, it’s a very attractive matchup. Miller runs 78% of his routes from the slot, and though Kansas City ranks best overall against outside wide receivers, they rank bottom-10 versus slot wide receivers (in terms of fantasy points allowed). If Gabriel is out again this week, he should be started as a borderline-WR2.

Without exaggeration, McLaurin is putting together one of the most impressive rookie seasons in recent memory – he’s accounted for 33% of his team’s passing yardage, which would be the most by any rookie wide receiver this past decade. Unfortunately, on a team that’s averaging a league-low 192.6 passing yards per game, that doesn’t translate as well to fantasy. However, I’d bet on a big game this week. After feasting in a top-six matchup last week (24.0 fantasy points), McLaurin gets another top matchup this week. The Giants rank third-worst in fantasy points per game allowed to opposing WR1s and second-worst in fantasy points per game allowed to wide receivers on deep passes (where McLaurin has scored 52% of his fantasy points). Adding insult to injury, the Giants are now without CB1 Janoris Jenkins, their only cornerback not to rank bottom-25 (of 124 qualifiers) in passer rating allowed (Jenkins ranked 13th-best). 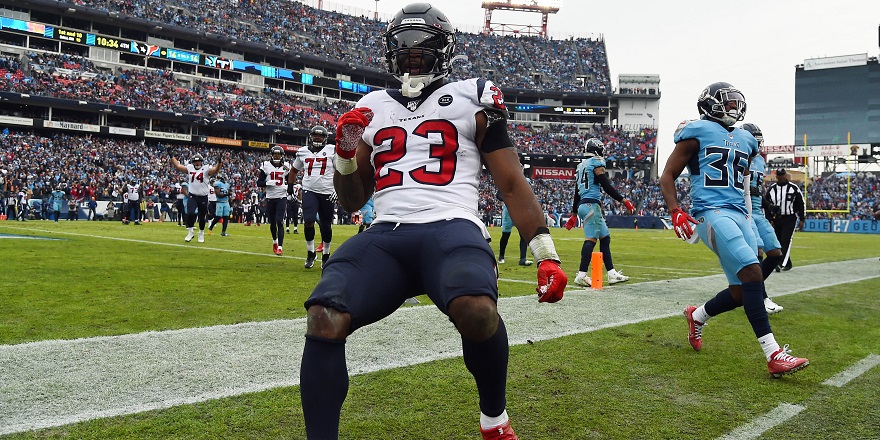 Hyde has reached 65 rushing yards in six of his last seven games, including 104 yards and a touchdown last week. However, he’s been far less productive in losses than victories, and 92% of his fantasy points have come on the ground. That bodes poorly for him this week, as underdogs against a Tampa Bay run defense that ranks best in both yards allowed per carry (3.12) and rushing yards allowed per game (56.4).

Since Week 9, Brady ranks worst of 28 qualifying quarterbacks in passer rating (73.5) and yards per pass attempt (5.59), while averaging just 13.6 fantasy points per game. Against a Buffalo defense that ranks second-best in fantasy points per game allowed to opposing quarterbacks (16.2) and second-best in passer rating allowed (76.7), he’s an easy fade.

Mostert flopped for us last week, in a game that didn’t quite go as expected (favored by 10.5 points, lost by seven points), but he did see good volume for the third week in a row. Since Week 13, Mostert is averaging 14.3 carries, 2.0 targets, and 20.1 fantasy points per game. Over this span, he’s played on 61% of the snaps, while drawing 69% of the touches out of the backfield and 83% of the team’s (running back) opportunities inside the red zone. As the league leader in yards per carry (5.7), in a game San Francisco is favored by 6.5, he can be safely started as a fringe-RB2.

If absolutely desperate or forced to stream a tight end off of waivers, you can turn to Gesicki, who has now seen six or more targets in six of his last seven games. And, over his last four games, he ranks sixth in XFP per game (21.2) and seventh in fantasy points per game (10.3). In a game Miami is projected to score 7.0 points above their season-long average, he’s a borderline TE1.