With another week behind us, and some more fresh stats to analyze, I’m here to help you with your toughest fantasy football start/sit decisions of the week for Week 14.

As was detailed in this week’s XFP report, with Eric Ebron out of the picture, Doyle is locked into high-end TE1 volume, which should result in high-end TE1 production. This week, he also gets a top matchup – Tampa Bay is giving up the second-most schedule-adjusted fantasy points per game to opposing tight ends. 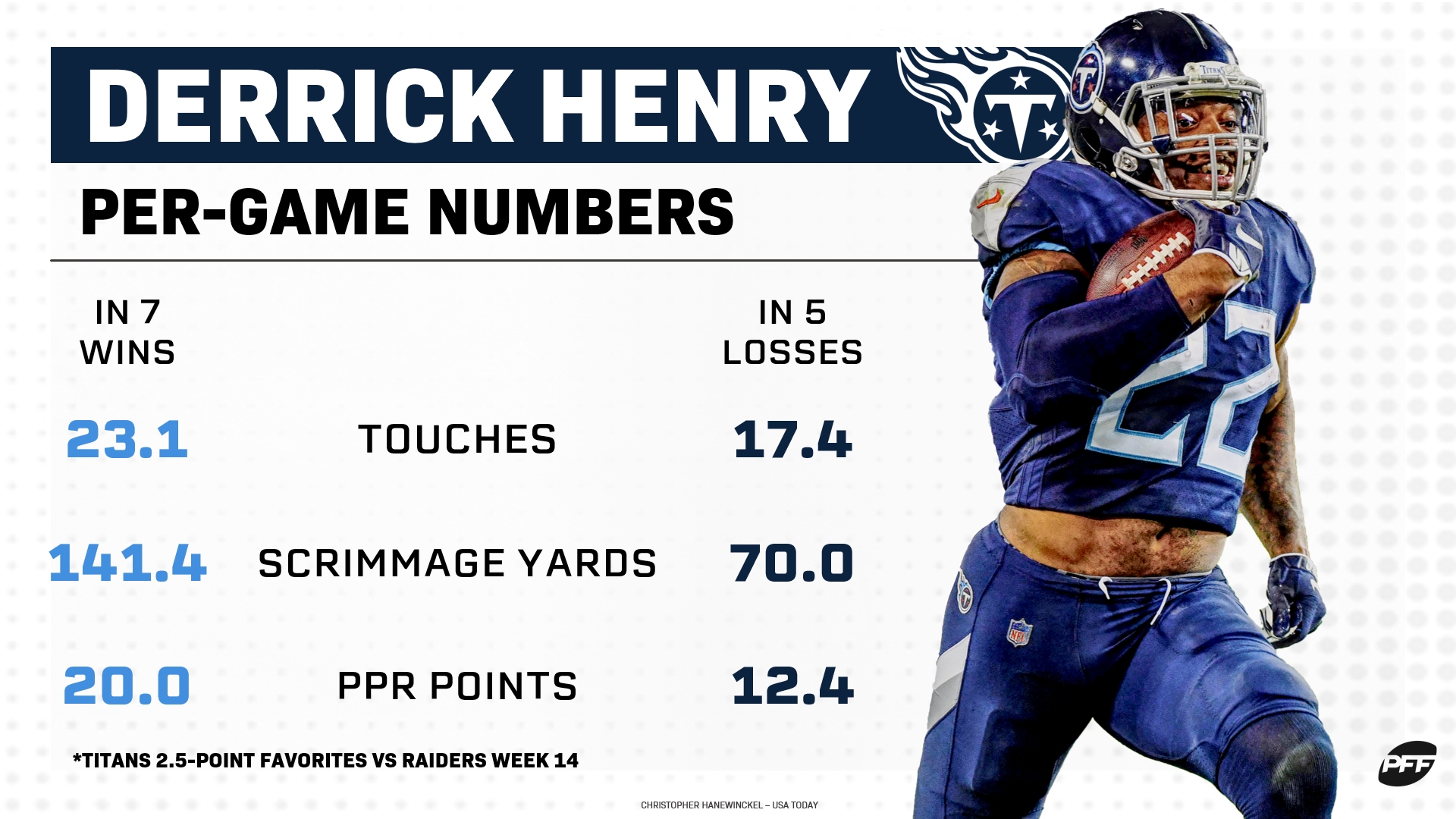 Across his last three games, Henry totals 68 carries, 532 yards, and 5 touchdowns. Yeah, there’s no way you’re benching that, and especially not in a game Tennessee enters as favorites — Henry averages 7.6 more fantasy points per game in victories than losses.

Since Week 2, Watkins averages just 7.4 fantasy points per game, with only one double-digit performance over his last seven games. With the league’s best shadow cornerback – Stephon Gilmore – projected to shadow Watkins, he’s an easy fade.

Brown has exceeded four targets just once over his last five games. Sure, he’s scored a few touchdowns over this span, but reached 50 yards receiving just once. In shadow coverage, against Tre’Davious White, he’s better left on your bench this week. Across five shadow games, White has held Terry McLaurin, Odell Beckham Jr., DaVante Parker, Courtland Sutton, and Amari Cooper to a combined 7.0 fantasy points per game.

In Week 13, Coleman (fully healthy) played on just 10 of 55 snaps, drawing six of 28 touches out of the backfield. Now, against a New Orleans run defense that ranks top-three in yards allowed per carry (3.53) and rushing fantasy points allowed per game (8.2), Coleman can’t be started as anything more than a high-end RB4.

In his first game back from injury, Freeman totaled just 10.4 fantasy points on 17 carries and five targets. However, maybe that was to be expected against a New Orleans defense that ranks fifth-best in schedule-adjusted fantasy points per game. This week, Freeman draws a Carolina defense that ranks worst by the same stat. They also rank worst in yards allowed per carry (5.38), after giving up 360 yards on 44 carries over the last two weeks.

Lindsay appears to have taken hold of Denver’s backfield in recent weeks, out-touching Royce Freeman 61 to 28 since Week 9. With this added volume, Lindsay should be started with confidence as a high-end RB2 against Houston’s ailing run defense. Since Week 9, Houston is giving up a league-high 36.7 fantasy points per game to opposing running backs.

Over the last three weeks, Baltimore has held Deshaun Watson, Jared Goff, and Jimmy Garoppolo to just 8.1 fantasy points per game. With Allen specifically – one of the most matchup-sensitive quarterbacks in fantasy – this bottom-three matchup warrants a downgrade to the bench.

In Week 13, Peterson came one yard shy of what would have been the 57th 100-yard game of his career. That’s great, but it also came against the league’s worst run defense, and he was out-gained by Derrius Guice, who touched the ball only one fewer time. As 13-point underdogs this week, Peterson is worth avoiding, even in this favorable-on-paper matchup.

Tate returns from injury to face a Philadelphia Eagles defense that is giving up the fewest fantasy points per game to opposing slot wide receivers (7.0), and 90% less than the league average rate. After stifling Julian Edelman and Tyler Lockett in recent weeks, don’t expect much from Tate.

Michel has been a major disappointment this season, but if there were ever a get-right spot it’d be this one. Bill Belichick builds his gameplans around an opponent’s greatest weakness, and Kansas City is clearly weakest against the run. The Chiefs rank bottom-three in yards allowed per carry (5.08) but eighth-best in opposing passer rating (86.1). 36% of their allowed yardage has come via the run, which ranks third-most. This is also how New England attacked Kansas City last year. Across two games, Michel totaled 53 carries, 219 yards, and 4 touchdowns. 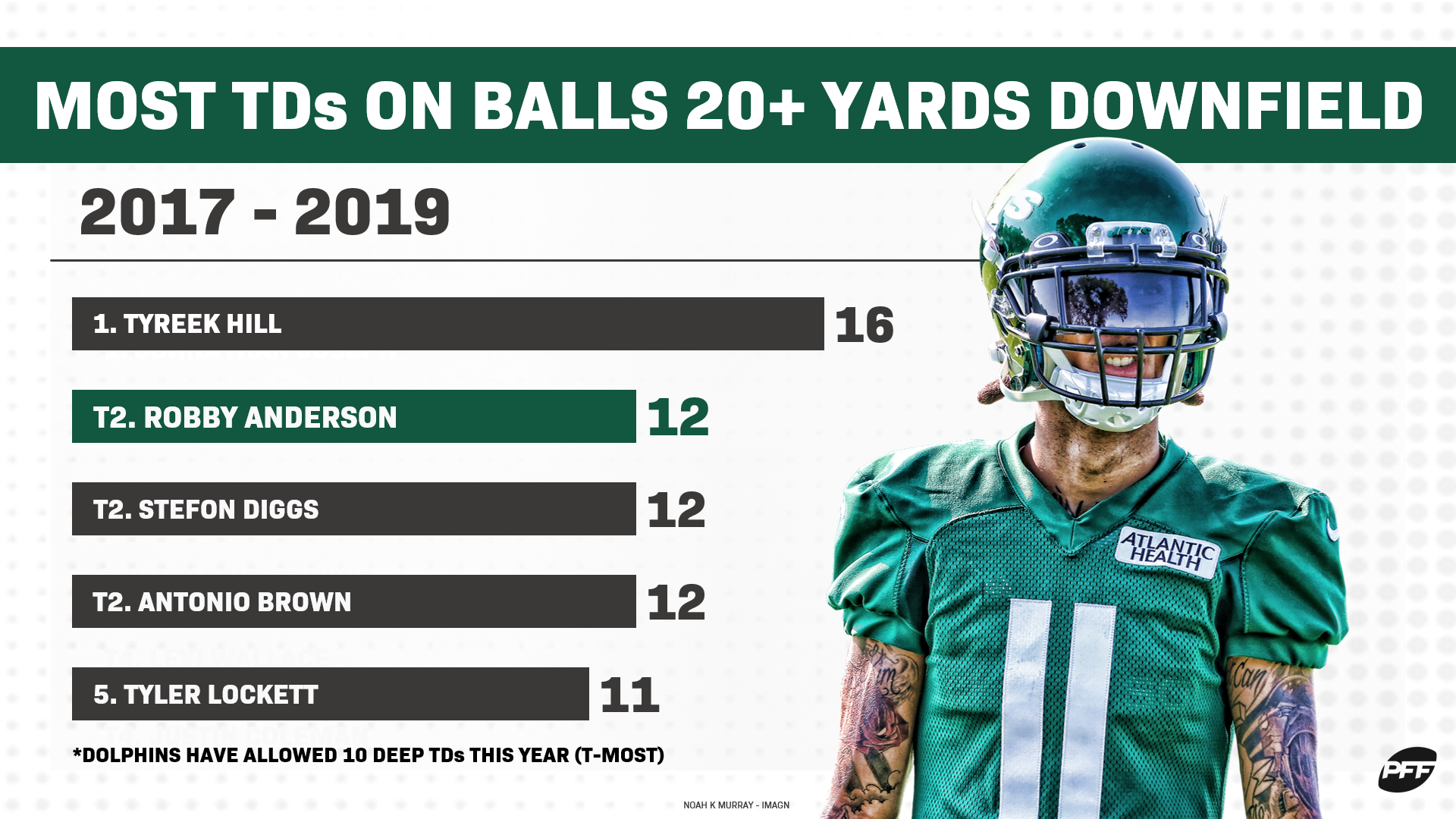 After a quiet start to the season, Anderson has scored 18.6 and 17.1 fantasy points over his last two games. It’s probably no coincidence that 134 of Anderson’s 187 yards (72%) came on balls thrown 15 yards or more through the air, and, Anderson’s two opponents – Cincinnati and Oakland – rank worst- and second-worst in fantasy points allowed on deep targets. This week, he gets a Miami defense that ranks fourth-worst by the same stat. And, not only are the Dolphins more vulnerable deep (which suits Anderson more than Jamison Crowder), they’re also far more susceptible to outside wide receivers (where Crowder runs only 25% of his routes). Miami ranks eighth-best in fantasy points allowed to slot wide receivers, but fourth-worst against outside wide receivers.

Over the past two weeks, Devlin Hodges has attempted just 26 passes, gaining 330 yards and two touchdowns. Washington was the targeted receiver on eight of those passes (32%), and accounted for 203 of those yards (62%) and both touchdowns (100%). Clearly, Hodges appears to favor his hunting buddy, and that added rapport will be sure to come in handy this week – Arizona is giving up the third-most fantasy points per game to opposing wide receivers.

If Gerald Everett is out again, I’d feel comfortable starting Higbee as a low-end TE1. He took advantage of Everett’s absence and a soft matchup last week, scoring 23.7 fantasy points on eight targets. In Week 14, he gets another soft matchup – Seattle is giving up the second-most fantasy points per game to opposing tight ends (16.1).

Darnold flopped last week, but he’s still our second-highest graded quarterback over the last three weeks, ranking third in fantasy points over this span. He’s a borderline QB1 this week, in a dream matchup, against a Miami defense that ranks dead-last in fantasy points allowed per dropback (0.56).