Room for fantasy improvement for the lowest YPRR averages

All offseason long, I’ve been making graphics for the PFF Fantasy Twitter account. As an amateur-at-best graphics maker, when I find a template I like, I run that thing into the ground. And one template I have liked is what I call the “spotlight” graphic, where I focus on one player and chart his fantasy points per game against some key PFF Signature Stat, usually his yards per route run.

I’ve done this because it’s amazing how well yards per route run track with PPR points per game (check out DeSean Jackson, or Doug Baldwin, or DeAndre Hopkins, or T.Y. Hilton, or Dez Bryant, or any one of a bunch of those graphics). Generally speaking, I track guys who have historically done well, because … well, because it’s more fun to be complimentary than to put out a graphic that is critical of a player. But for every exceptional YPRR number, there is a guy whose results leave something to be desired.

Twelve different qualified wide receivers averaged under 1.00 YPRR in 2017, making the list of guys who have done so 2006-present 85. Today, I wanted to look at the 12 from 2017 and investigate whether there’s reason for optimism going forward.

Since 2006, there hasn’t been a single qualified wide receiver average under 1.00 YPRR and still top 10.00 PPR fantasy points per game. You’d think some inefficient receiver would have stumbled into enough touchdown luck in that span, but there isn’t a single one. In fact, in 2017, we saw the single best fantasy points per game in a season of any receiver with under 1.00 YPRR: 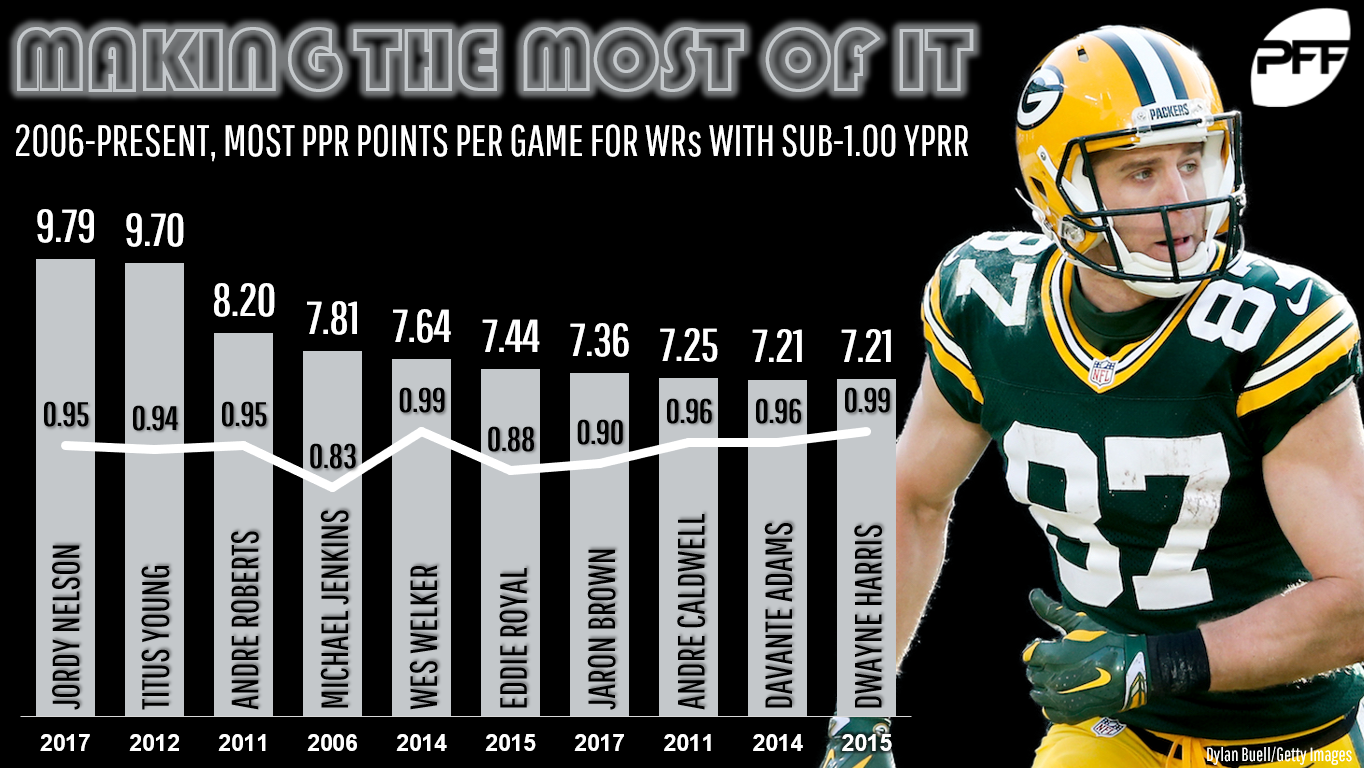 Before 2017, 73 receivers had a seasonal YPRR that started with “0.” Only 29 of those receivers have ever had a qualifying season again in their careers after that. That includes Darrius Heyward-Bey — who had two seasons on the list that were followed by qualified seasons — Eddie Royal (3), Harry Douglas (2), and Mohamed Sanu (2). That leaves 24 unique names on the list, who had 55 combined seasons as qualified receivers after their sub-1.00 years.

Scott Barrett did a piece on the best and worst YPRR performances of 2017 last week, but here are the players from last season who put up under 1.00:

Barrett’s piece did the majority of the necessary work here, but Jones warrants special mention, as the second-lowest YPRR from a qualified rookie receiver since 2006. Maybe there’s room for growth from Jones as he goes forward, but it’s a fairly dubious beginning, and it’s going to have to be his presence on a Buffalo offense that doesn’t have many weapons that carries him at least for starters in 2018.