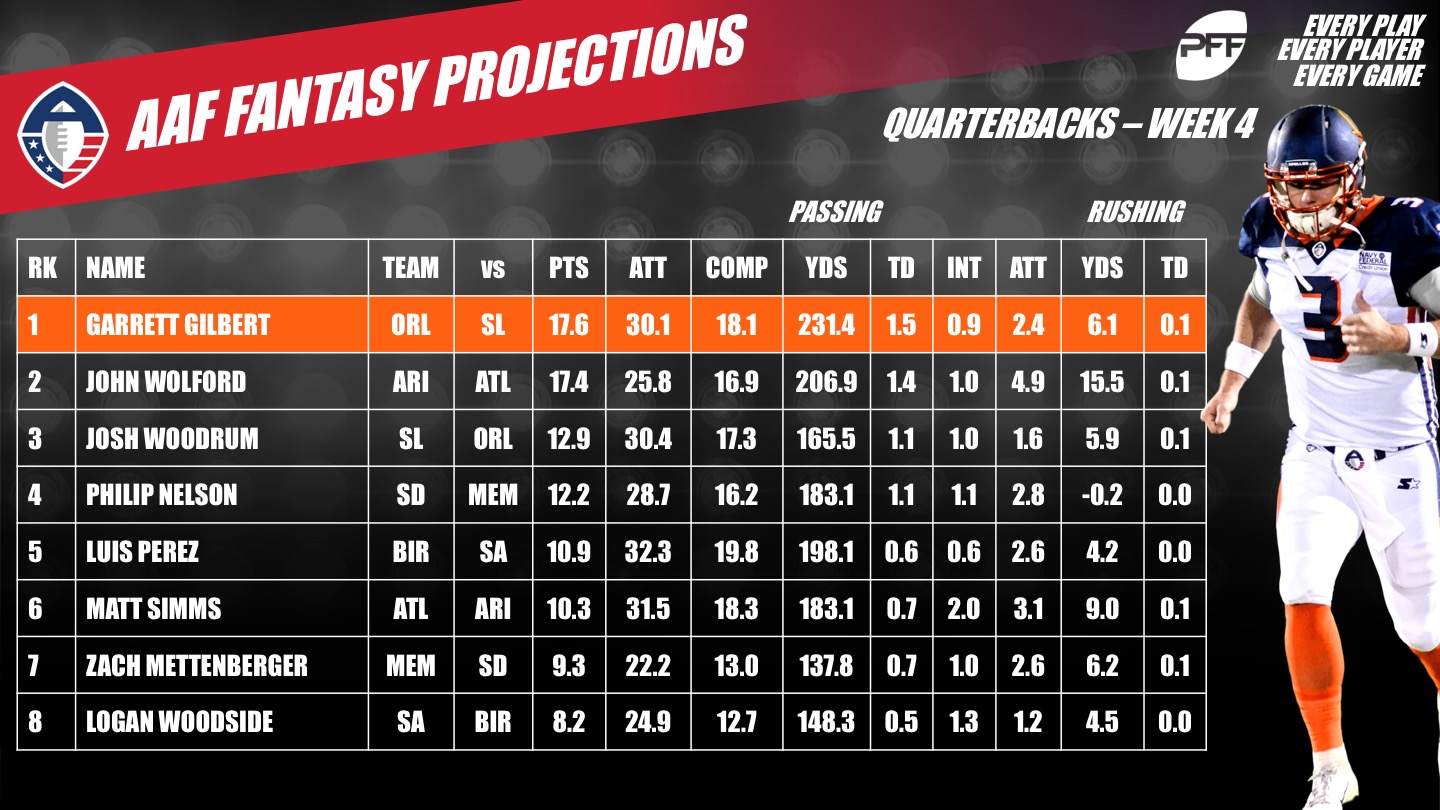 Garrett Gilbert is running away with the top spot after three weeks of play. While John Wolford still leads the position in passing touchdowns, Gilbert’s 827 passing yards is nearly 200 more than Logan Woodside in second place. Wolford is still a strong option, but the Hotshots did use Trevor Knight last week. Knight could continue to cut into Wolford’s work.

From there you have a tier of Josh Woodrum, Philip Nelson, Luis Perez, and Matt Simms. Nelson and Simms are coming off solid performances last week, finishing third and second in fantasy scoring among quarterbacks. While Zach Mettenberger put up big numbers after Christian Hackenberg was benched last, it’s too risky to trust Mettenberger this week. Likewise, tread lightly with the San Antonio duo of Woodside and Marquise Williams.

Trent Richardson continues to be the top fantasy option at running back despite averaging just 2.5 yards per carry. But fantasy football loves touchdowns, and Richardson is scoring them in bunches. Running backs have found pay dirt 20 times so far this season and Richardson has six of them.

From there, we have a trio of intriguing options in Zac Stacy, Branden Oliver, and Ja’Quan Gardner. Stacy got more involved in the passing game last week with three catches on four targets. That plus his ample workload as a runner gives him a high fantasy floor to go along with the upside he displayed in Week 2. Oliver may seem a bit high, but keep in mind that he’s out-carried Joel Bouagnon in each of the last two weeks and saw goal-line work last week. Gardner is the talk of the AAF fantasy work after his second-straight 100-yard rushing performance. While some may rank him higher, Gardner’s touch volume could be somewhat capped with the Hotshots still using a committee in their backfield with Gardner and Terrell Watson.

Like at quarterback and running back, nothing really changes at the top. Rashad Ross and Charles Johnson are locked in as your elite options. Ross currently leads the league with a massive four receiving touchdowns, and Johnson is tops in receiving yards at 305. Mekale McKay found the end zone for the first time this season in last week’s contest and enters Week 4 as the league leader in targets. It’s also worth pointing out Nelson Spruce, who has really emerged for the Fleet over the last two weeks. San Diego moved Kameron Kelly back to corner last week, and Spruce ended up starting and leading the Fleet wide receivers in fantasy scoring thanks to two touchdowns.

Tight end is just an absolute mess for fantasy purposes, but Gavin Escobar does seem to be solidifying himself as the top option at the position. After a slow start to the season, Thomas Duarte saw an uptick in usage last week with three catches on three targets. His fantasy value is trending up. From there, it’s the same as every week. Start your tight end and pray he gets in the end zone.