Just when you thought you were out of the fantasy football season, we’re going to pull you back in. It’s time for the NFL playoffs, which means another month of fantasy before the offseason.

Fantasy leagues during the NFL playoffs are not a new idea, but they have been increasing in popularity over the last few years. At only a quarter of the length of the regular season, these leagues are a great way for those who are jonesing to get one more fix of fantasy or a chance for redemption to rid that bad aftertaste of a losing season.

There are a variety of formats you can use in the NFL playoffs, but the three most common are salary cap, one-and-done, and traditional draft. Regardless of which your league uses, the idea remains the same – pick the players who are going to score the most points. 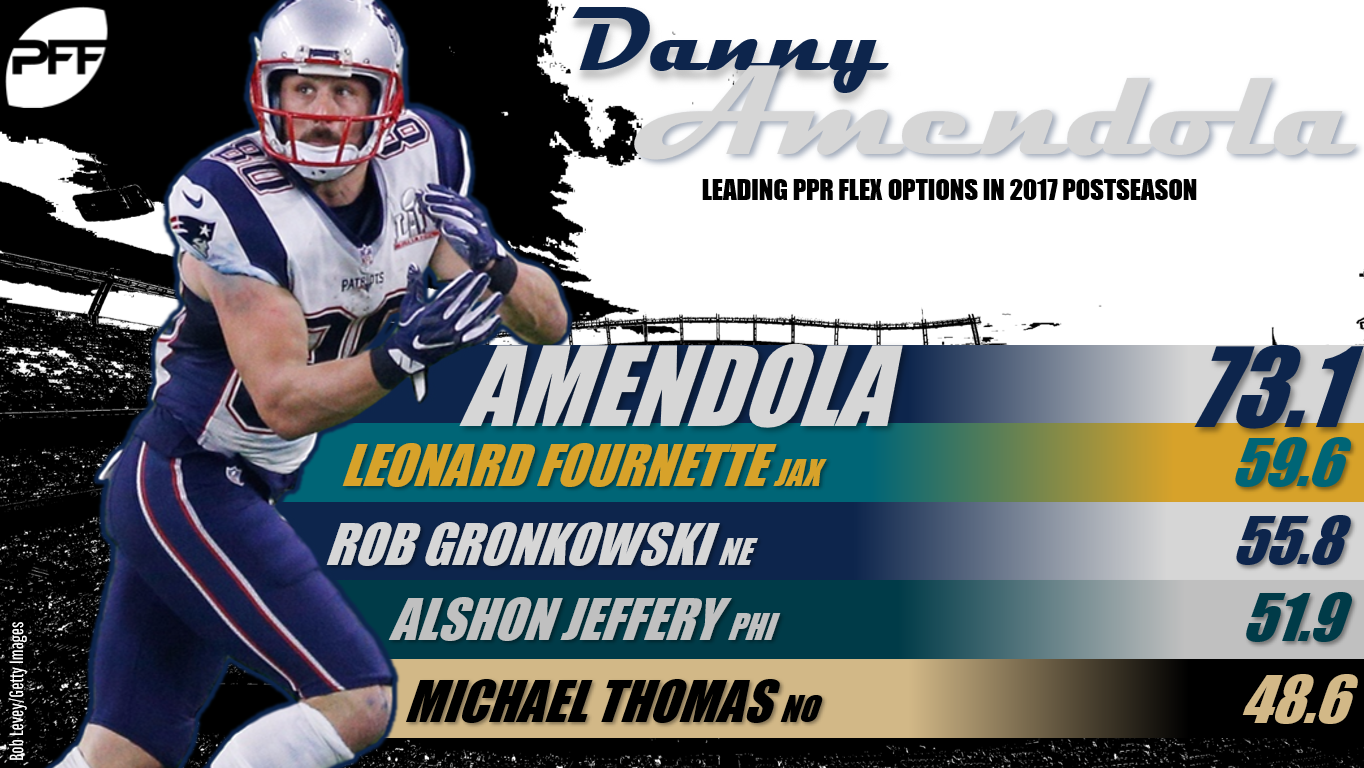 In draft-style leagues, this task is much easier in the regular season. Barring any injuries or suspensions, all players play the same amount of games. But in the playoffs, as teams are eliminated, you lose their players. The key here is to draft not just quality players, but quality players on teams that have the best chance to play multiple games and hopefully advance to the Super Bowl.

To determine which teams you think will advance, I suggest drawing up a bracket and make your picks just as you would for the NCAA Basketball Tournament. When mapping out your picks, remember that Vegas is your friend. Here are the current odds to win the Super Bowl:

Two things should be quite obvious right away – 1) The Saints are the odds-on favorite to win the Super Bowl with Kansas City just edging the Rams and Patriots as the second choice, and 2) Unlike last year when the Titans and Bills were massive longshots at 100/1, the bottom five teams are all tightly bunched at 25/1. So things are very much up in the air, and that makes this a challenging bracket to fill out.

It can be difficult to use the Super Bowl odds to our advantage here, but we can use the odds to win the AFC and NFC to help us out. Here’s the AFC:

The Chiefs earned home-field advantage in the playoffs and come in as the top pick, with the No. 2 seed Patriots as the second choice. From there, the remaining four teams are all in the mix with the Texans and Colts coming in at 10/1. That’s significantly shorter odds than last season where we saw the Bills and Titans both at 40/1 to win the AFC.

In the NFC, the odds aren’t that much better.

The No. 1 seed Saints were installed as the odds-on favorites. At the other end of the spectrum, the Cowboys and Seahawks are the biggest underdogs. Given the odds, the Bears are the best bet to give you at least two games with the potential to deliver four games of fantasy production. Getting four games from your players is one of the biggest factors in winning fantasy playoff leagues.

With all of this information, you can now draw out your playoff brackets. Of course, the Vegas odds are typically very chalky, but you don’t need to follow them 100% of the time. Remember, it’s your draft, so draw up the brackets based on who you think will win. Here’s how I project the playoffs:

You have two fantasy QB1s in this contest with Deshaun Watson and Andrew Luck both finishing in the top five in regular season fantasy scoring. Of course, we do have a recent sample to help us out in this one, as the Colts won in Houston 24-21 just under a month ago.

If you like ground-and-pound football, this is the game for you. Seattle has rattled off 40-plus rushing attempts in each of their last four games, so expect more of the same. While Dallas isn’t quite that run-heavy, we know they like to lean of Ezekiel Elliott. However, what tips the scales is the defensive side of the ball. Seattle is clicking and haven’t allowed a rushing score since Week 12.

Here’s another game where we have recent history to reference. The Chargers offense was no match for the Baltimore defense two weeks ago, and the Ravens offense did just enough to win that contest 22-10. Now the Chargers have to go across the country to face the Ravens in Baltimore.

Hats off to Doug Pederson and the Eagles for grinding their way into the playoffs this year, but it’s tough to like their chances against Matt Nagy’s Bears. Chicago’s stifling defense should make things very difficult for Nick Foles and company to move the football.

This has the makings of a very fun game to watch, with Patrick Mahomes and Andrew Luck duking it out. While the Colts have had a heck of a run this year, Kansas City’s offensive firepower will be just too much for Indy to overcome.

Yet again, we have a rematch of a December showdown. Chicago won that contest and held the Rams to just two field goals. While this one will be in Los Angeles, the Bears still have the formula to neutralize Sean McVay’s squad and pull out the win.

The Ravens have the chance to be this year’s biggest Cinderella story, but having to face the Patriots in New England will be no easy task. Bill Belichick game plans to eliminate the opposing team’s best weapon, and in this case that will be Lamar Jackson.

Seattle turned things around after a rough start to the season, but the Seahawks don’t quite have the firepower to go into New Orleans and take down one of the league’s most explosive offenses.

If this game was in Chicago, there’s a chance I’d go with the Bears. But the “dome field advantage” for the Saints is a big factor in this prediction.

This was one of the toughest games to decide on. Kansas City’s offensive prowess is very intriguing, but again, there’s a good chance Belichick and company game plan to neutralize Patrick Mahomes. That plus the Chiefs’ deficiencies on the defensive side of the ball gives the slight edge to the Patriots

Sometimes the result of the Super Bowl impacts your fantasy draft decisions, but as we saw last year, the losing team can still put up major fantasy points.

While it’s very easy to simply leave things like this, I’d strong advise against it. Using full games, we’ll end up with a set of rankings that is heavily weighted toward the three-game teams. And the reality is that the teams that we pick to lose don’t have a 0% chance to win.

Based on the projected spread for each game, we can calculate the team’s percentage change of winning. If you’d like to calculate the chance of winning, here’s the formula: 0.0319*x+0.5001, where “x” is the spread.

The top tier doesn’t contain any Patriots, but the Chiefs are still more than capable of putting up big fantasy points in just two games. Of course, the Saints’ clear path to the Super Bowl means Kamara, Brees, and Thomas are good bets to be off the board in the first five picks.

Try to get the most bang for your buck in this range. Even if you don’t think a team will play more than one game, players like Gurley and Elliott and Hopkins have good value in this range. And there’s always the chance you’re wrong on your game picks. 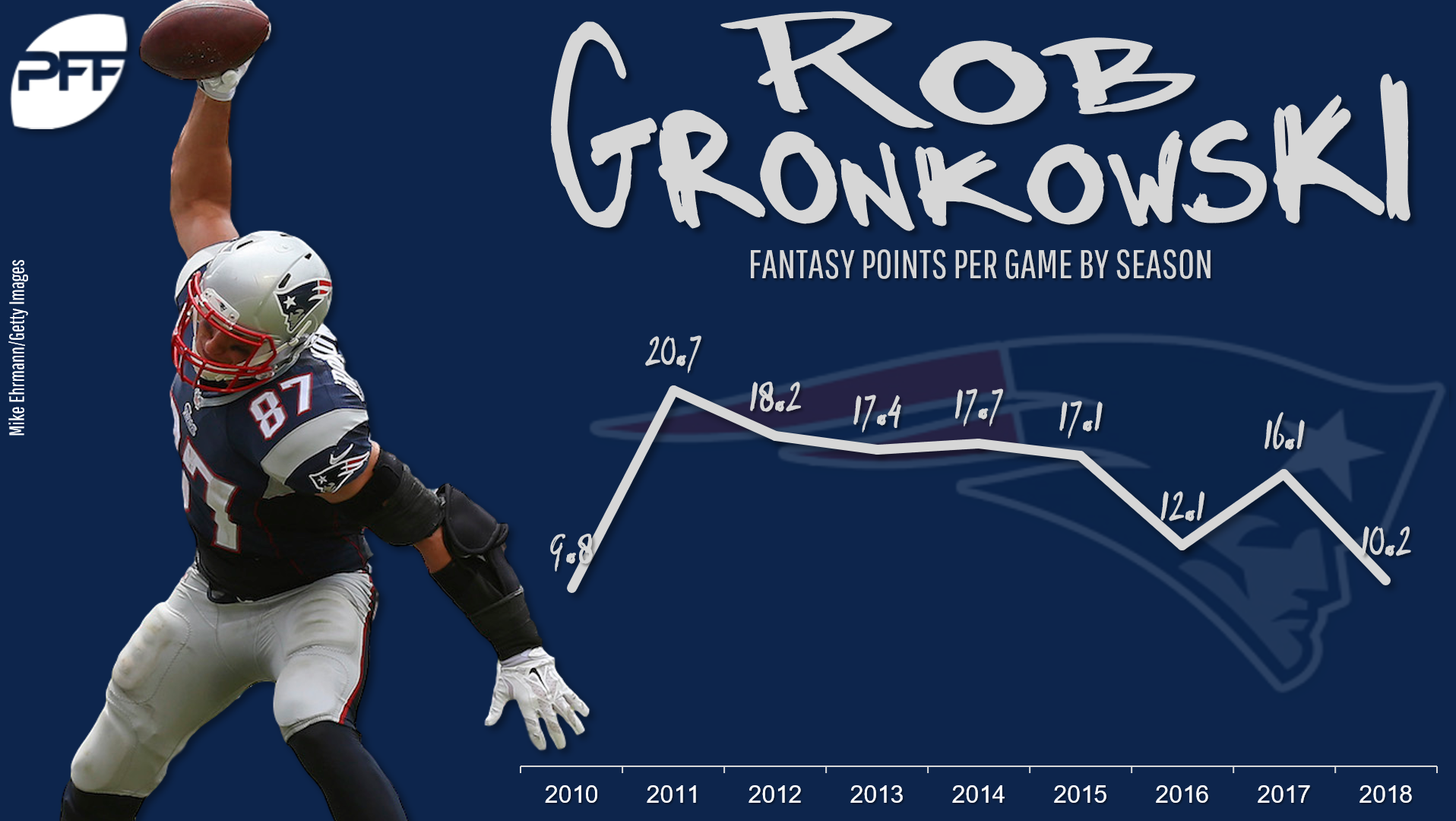 The Patriots are tricky in this draft. While they’re in a good position to play three games, the regular season taught us that we can’t necessarily set our watch by Brady or Gronkowski any longer. It was also tough to come by consistency from anyone other than Edelman. And let’s not forget that Danny Amendola was the highest-scoring non-quarterback for the Patriots in last year’s playoffs.

If you miss out on the first four quarterbacks, this is a good range to grab two. Trubisky flashed major upside during the season and has the potential to play three or more games. The same is true for Jackson. While my brackets have the Texans losing on Wild Card weekend, there’s no denying Watson’s ability to put points on the board. Last year, Ben Roethlisberger only played one game and still managed to put up top-15 fantasy numbers in playoff leagues. 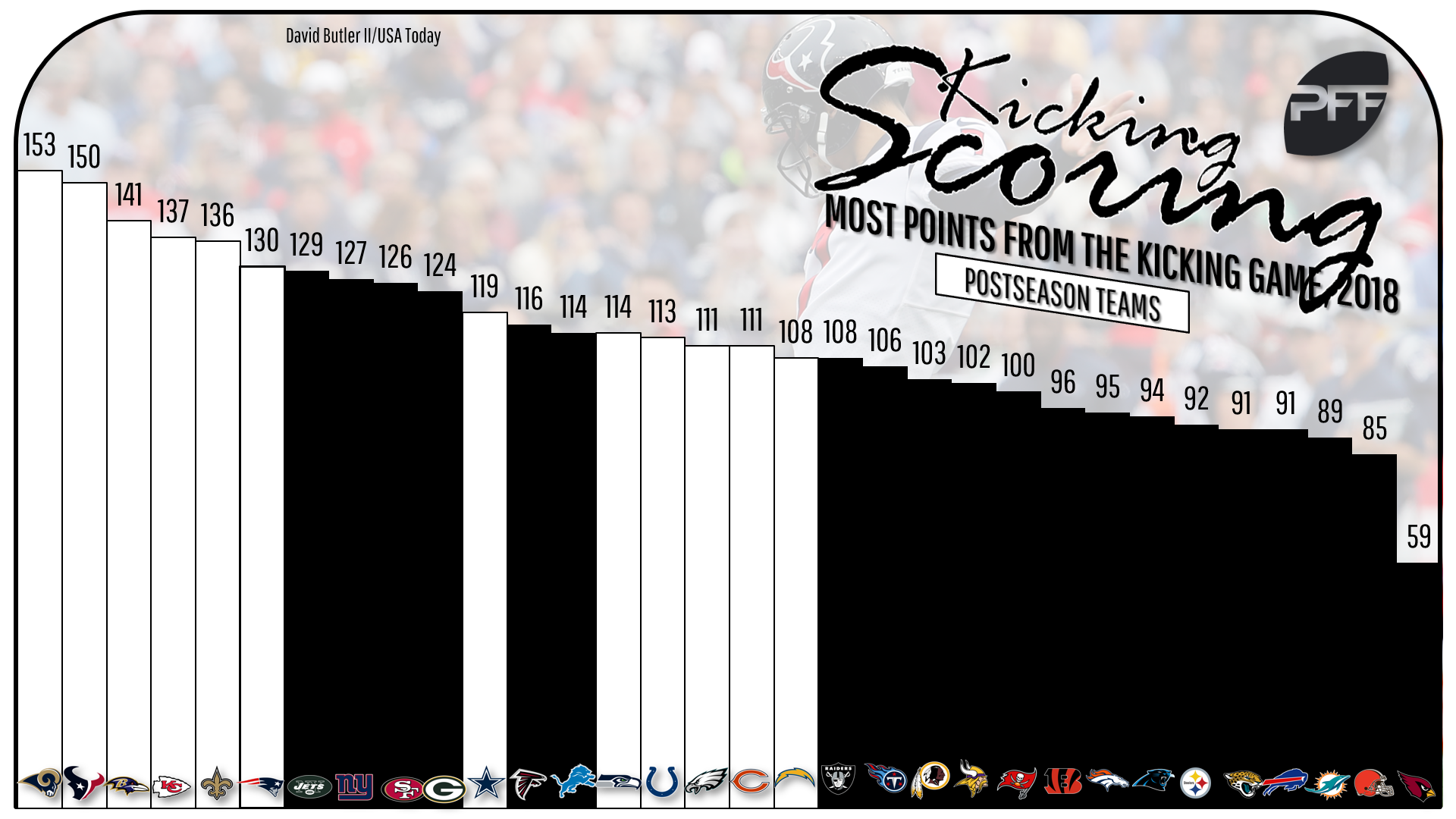 Unlike in regular-season leagues, you don’t want to wait to grab your kicker and defense. Again, you’ll want to lean heavily on your bracket picks and draft the kickers and defenses you project play the most games. Wil Lutz will likely be the first kicker off the board with the Saints defense likely being picked in the same range.

From this point forward continue to load up on the teams you think will go the furthest, and don’t be bashful. This means picking guys deep down the depth chart. So players like Keith Kirkwood and Dan Arnold are very intriguing in the later rounds if you happened to load up on the Saints.