Fantasy football strength of schedule is overrated. Sure, the charts are pretty to look at, but they really don’t tell you anything of value. The numbers you see in strength of schedule are almost always based on last year’s fantasy points allowed by each defense. So you get a fantastic picture of what already happened, but at the same time there’s very little insight into what to expect in the future.

Why write an article on something that is essentially useless for fantasy purposes? That’s a great question. Thanks to all of the data we have at our disposal here at PFF, we can give you a much more accurate view of strength of schedule. Instead of basing this information off last year’s stats, we put our strength of schedule together based on the current defensive rosters. Using PFF grades, we can establish the overall matchup outlook for each position based on a team’s schedule.

Keep in mind that fantasy strength of schedule data is a small piece of the overall puzzle and should not be considered the be all, end all in your fantasy decision-making process. While the difference between the best and worst schedules may look significant, it isn’t. There isn’t anywhere near as wide of a gap between the best and worst defenses in the NFL as there is at the college level. In fact, the best schedule at quarterback this year is only 3.8% better than the worst schedule at quarterback. So resist the temptation to move players up or down significantly based on their schedules. Instead, use this information to tweak your rankings and break ties between players who are very close on your draft board.

Below, you’ll find the 2019 fantasy football quarterback strength of schedule sorted in order from the best to worst schedules. We also included the strength of schedule for the fantasy football playoffs in Weeks 14-16. The chart is color-coded with a heat map to give you a better sense of the good and bad schedules at a glance. The greener the box, the better the matchup. Likewise, a red box indicates a bad matchup.

Matchups are also ranked for each week with one being the best matchup. Keep in mind that the bye weeks will mean that the worst matchup for the week isn’t always 32. For example, in Week 9, there are four teams on bye, so the worst matchup is ranked 28 for that week. You’ll also notice that Oakland is the best matchup for quarterbacks based on PFF grades. However, the Raiders are on their bye in Week 6, so Washington gets the No. 1 matchup for the week against the Dolphins.

He was one of the top fantasy quarterbacks over the first three months of the season last year and it looks like Goff is poised to again get out of the gate fast. The Rams get a favorable divisional slate with the 49ers and Seahawks among the better matchups in the league for quarterbacks. If there’s any knock on Goff’s schedule, it’s his Week 15 contest against the Cowboys in what will be the semifinal round of the fantasy playoffs. Dallas’ current roster ranks as the sixth toughest matchup in both pass-rushing and coverage. 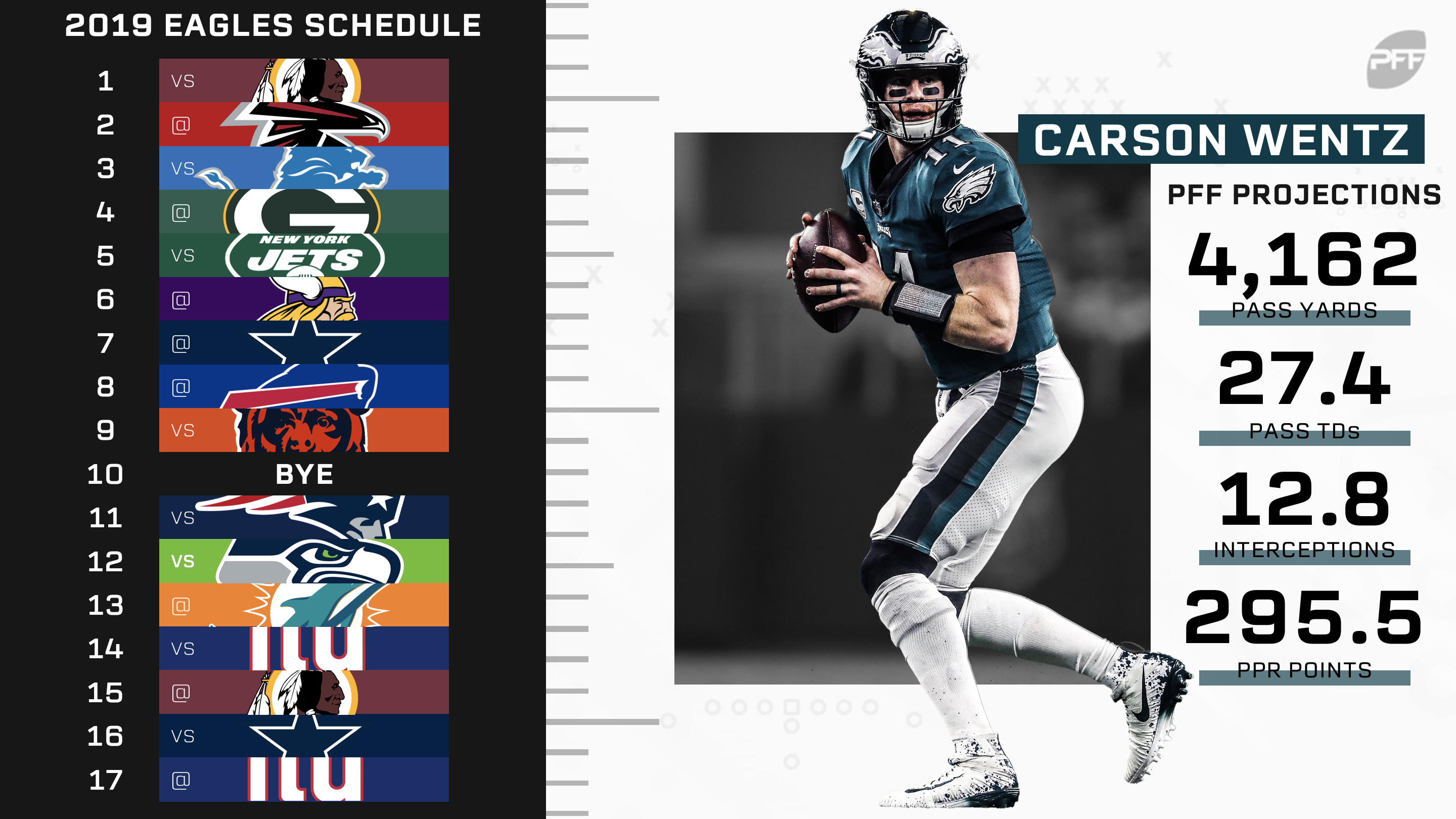 Like Goff, Wentz has shown the ability to put up big-time fantasy points, as he ranked second at the position in fantasy scoring in 2017 before his season-ending ACL tear. Of course, injuries are a very real concern with Wentz, but his schedule makes him appealing as a back-end QB1 this year. The Eagles has a tasty stretch of matchups at the end of the season from Weeks 12-15 with the Seahawks, Dolphins, Giants, and Redskins on the docket. Of course, they also have to face Dallas in the fantasy playoffs in Week 16.

The Pats are a much more run-heavy team than they were when Brady was an elite fantasy option earlier in his career. That said, getting to face the Dolphins twice along with matchups against the Giants and Redskins in the NFC East does a schedule good for Brady this year. While we don’t expect a return to his former fantasy glory for Brady, his schedule keeps him right on the border of QB1 territory.

The young signal-caller showed improvement down the stretch last season for the Jets. Like Brady, Darnold gets the Giants, Redskins, and two contests against Miami. Unlike Brady, we aren’t going to want to trust Darnold as a QB2 fantasy option just yet. That being said, keep an eye on him as a streamer option when we get into November. 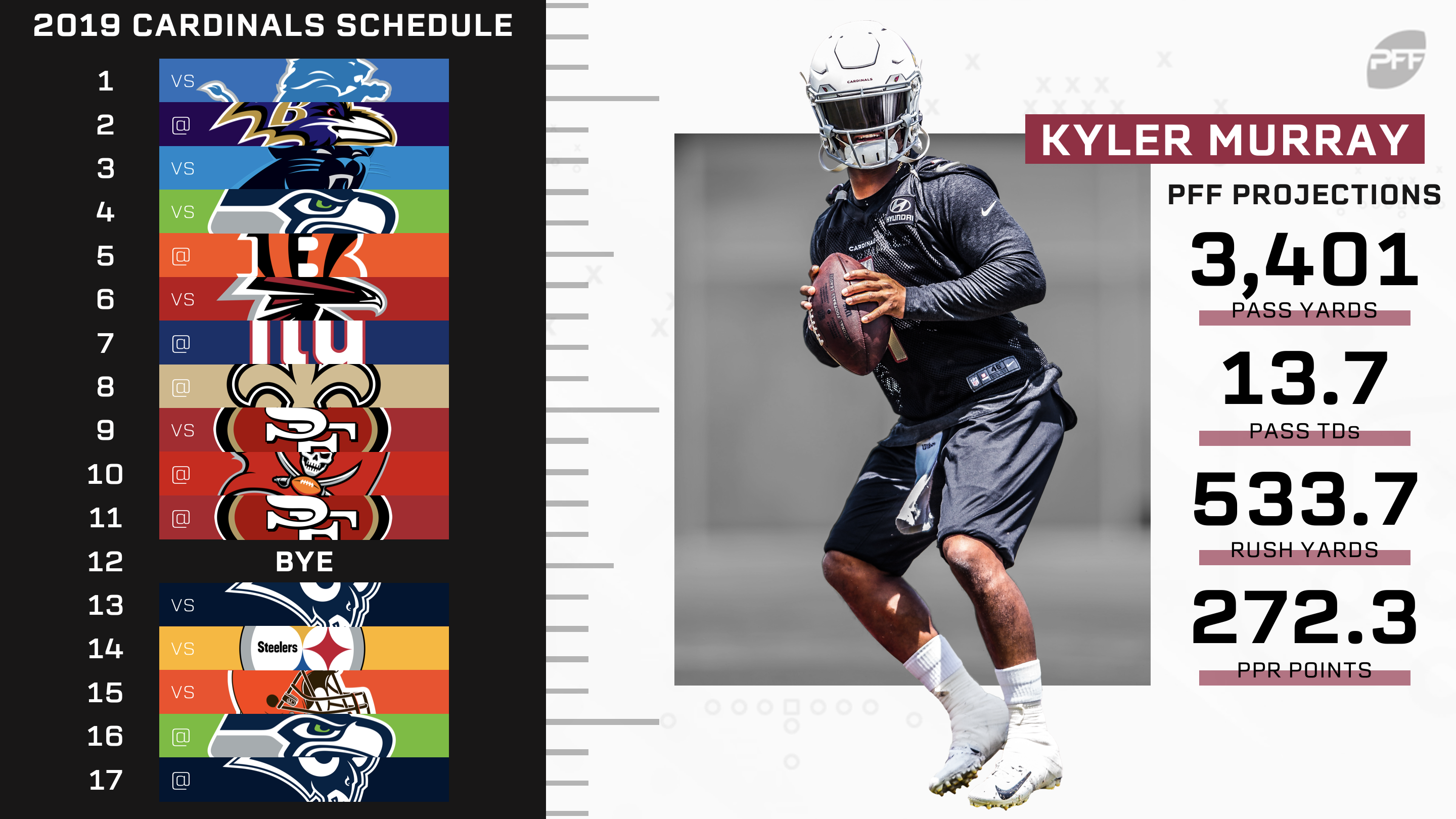 The No. 1 pick in this year’s draft is one of the most buzzed-about fantasy options as we head into fantasy football draft season. There are a lot of variables in play in Arizona, but Murray favorable schedule should allow him to hit the ground running. He’s a very appealing upside option after roughly the first 10 quarterbacks come off the board.

Things should be better this season for the Raiders passing game, as Carr got a much-needed upgrade in his wide receiver corps with the additions of Antonio Brown and Tyrell Williams. That said, the Raiders schedule is downright rough with matchups against Denver and Chicago early in the season. Oakland also has the face the Jags and Chargers in the last two weeks of the fantasy playoffs. Don’t be too worried about this slate for Brown, but Carr’s upside is somewhat limited. He’s still just a borderline QB2.

Honest truth: The Chiefs had one of the worst schedules for quarterbacks last year too. For a select few players, the matchups simply don’t matter. We really can’t say that about 99% of the players in the NFL, but we can about Mahomes. He’s a stud and is a heavy favorite to repeat as the top fantasy quarterback this year.

We shouldn’t be surprised to see Cousins toward the bottom of the list with two games against the Bears on his schedule. Minnesota also faces the AFC West, so that means tough contests against the Chargers and Broncos. While the schedule isn’t appealing, Cousins is still in play as a late-round option who you’ll likely be able to draft on the cheap in 1QB leagues.

With a nearly identical schedule to the Vikings, Chicago draws a tough slate this season for Trubisky. Like Cousins, Trubisky is typically available in the late rounds of your drafts. He certainly offers upside this season, especially in Week 5 when the he faces the Raiders. However, the overall outlook of Trubisky’s schedule should be factored if you’re deciding between him and another late-round upside option with a more favorable schedule (like Lamar Jackson).

Like Mahomes, we shouldn’t get too carried away with the schedule for Watson. He’s coming off a strong season where he not only got it done with his legs, but also with his arm. Better yet, the Texans have an impressive fleet of receivers for Watson. However, if the schedule makes you skittish, you could bump him down just slightly behind Andrew Luck and Aaron Rodgers, who both have better schedules. It isn’t a move we’re making, but it’s certainly a reasonable usage of this data as you build your draft board.