Nothing hits harder than seeing the dreaded words “non-contact injury” in a press release in the middle of the fantasy football season.

Now that the NFL has added an extra game to the regular-season schedule, the increased injury threat will hover across the fantasy football landscape all year long. After all, fans will never forget the devastation long-lasting injuries can inflict on a fantasy lineup; we are just one season removed from Christian McCaffrey and Saquon Barkley, 2020's top two fantasy picks, missing a combined 27 games.

Strategies that aim to assign an injury risk to top players have started to enter the mainstream over recent years. These strategies have enjoyed varying degrees of success, though we are yet to answer the biggest questions — can we really predict in-season injuries, and if so, what inputs are most valuable when projecting future occurrences?

Through their adjusted games lost metric, Football Outsiders has been able to conduct team-level injury research to account for the impact that injuries have on the team as a whole. Adjusted games lost has a year-over-year correlation of 0.33 going back to 2010, which shows that some teams consistently experience more impactful injuries than others.

This could be due to several competing factors, whether it’s workload, rest management, the training staff, or insight gained from injury research. From a fantasy perspective, there isn’t a need to understand exactly why certain teams separate themselves from others in regard to player injuries, but it does offer a baseline to gauge future injury potential.

Other sites have taken it a step further, projecting injury risk by focusing on historic injury data for individual players. Sports Injury Predictor provides a statistical probability for injury along with the projected number of games missed, based on each player's historical information.

The COVID-19 pandemic significantly impacted the injury loss experienced by certain teams, so adjusting the numbers to only take into account situations outside of COVID appears to be the best way to project team-level injury outlooks for the 2021 season. And we can take our first step toward this by using PFF’s developing injury dataset, along with modeling approaches, to evaluate injury risk for players most likely to be selected in best-ball drafts.

All fantasy players understand that injury risk is greater for certain positions than it is for others. Last season is the shining example, as the first two overall selections in redraft fantasy formats missed a combined 27 games due to injury. Any injury can be devastating to your fantasy roster, but it is impossible to overcome when it happens to such a high pick.

This has led to a heightened discussion on popular drafting strategies that focus on an antifragile approach to the running back position by going zero or modified zero running back. As mainstream as these ideas have become, they haven’t fully taken over, as the first six picks in UnderDog best-ball leagues continue to be running backs. In fact, 15 of the first 24 selections in UnderDog ADP are running backs.

The reason is obvious. If you remove games with injuries and focus solely on what the top 60 players by ADP are expected to produce from a fantasy perspective, running backs are the clear choice at the top of drafts — their value over a fantasy replacement at the same position is enormous.

The graph below shows the Bayesian forecasted fantasy scoring distribution for players taken within the top 60 ADP broken down by position. 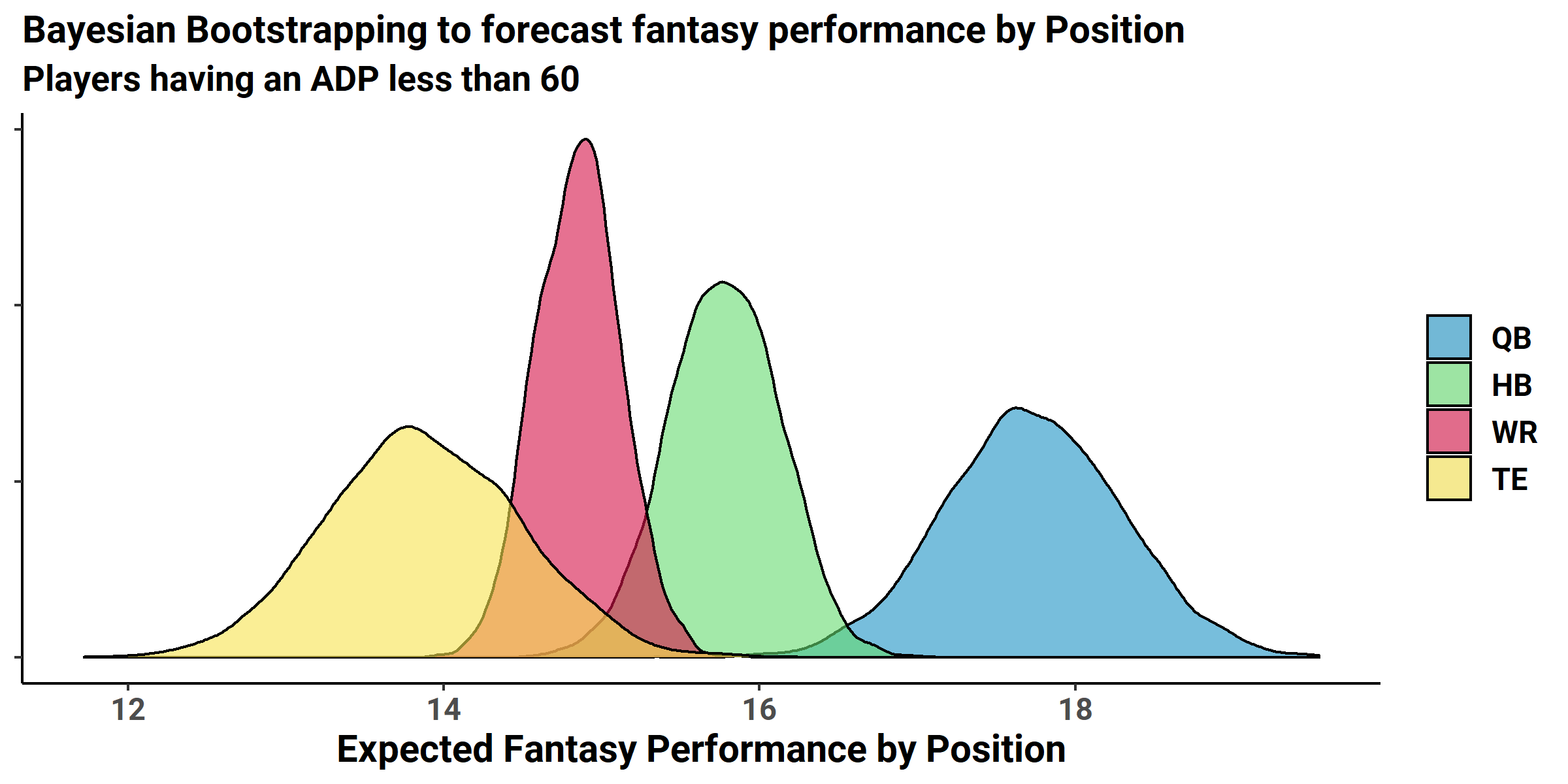 The separation between the running backs' and wide receivers' forecasted outcomes shows how much more beneficial a healthy running back can be to your roster than a top-end wide receiver. The volume of touches guaranteed to an RB1 option consistently trumps the production of the most elite pass-catchers.

Before simply turning this into a robust quarterback drafting strategy and calling it quits, we can gain a simple understanding of opportunity cost. Quarterbacks have almost the same expectation for fantasy performance throughout the entire best ball draft, which is why taking one early is a throwaway pick. The fantasy point value at all other positions drops off a cliff as we head toward the later rounds of the draft, but quarterback scoring stays consistent throughout.

But injuries are a part of fantasy football and should be taken into account when evaluating the best strategy to utilize in best-ball formats. Let’s use our Bayesian forecasting approach on historical injury data to evaluate how often we can expect each position to be active versus inactive in a given week.