The NFL draft never works out how you expect it to, but it’s fun to speculate on the perfect landing spot for a player’s fantasy football value. I recently went through this exercise for the top running backs and wide receivers in this year’s class. These landing spots were selected based on the potential for immediate fantasy impact, and once a team was chosen, they were crossed off the list of possible landing spots. 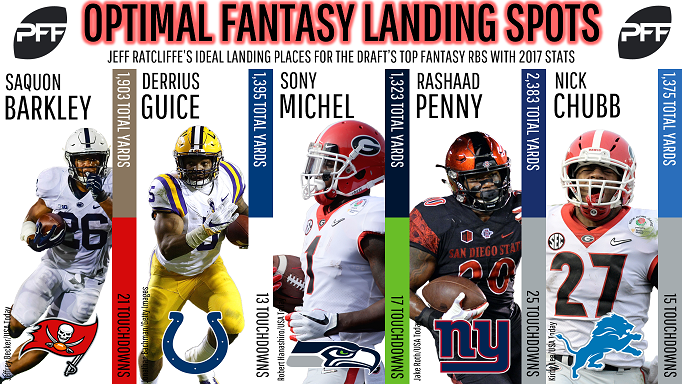 Unlike many of the running backs in this year’s draft, Barkley’s landing spot will be essentially limited to just a handful of teams. Of teams in the top 10 picks likely to select a running back, it comes down to the Colts and Buccaneers. While he’d step right in as a three-down back in either situation, but Bucs offer slightly more upside for Barkley as they have more all-around talent at the skill positions and boast the slightly better offensive line.

Eliminating the Bucs from the mix essentially positions Indy as the next-best landing spot for running backs in the draft. Guice doesn’t possess Barkley’s talent, but he has the physicality to step right in as the lead back with Marlon Mack likely serving as the passing-down option. It’ll be tough for Guice to offer immediate RB1 fantasy value in this spot, but if Andrew Luck is healthy, the offense should have enough punch to immediately put Guice in the RB2 conversation.

While injury flags could push Michel down draft boards, he’s still one of the most well-rounded backs in this year’s crop. Seattle hasn’t been able to find a consistent lead back since Marshawn Lynch, and don’t have that player on their current depth chart. Michel would offer the Seahawks versatility as a player who is equally adept at running between the tackles and catching the ball out of the backfield. The biggest concern about this spot for Michel is the Seahawks’ offensive line, but getting to play with Russell Wilson would still be very appealing for Michel’s fantasy value.

The nation’s leading rusher last season would step right into the starting job in New York and would get to play in a very favorable offense. Last season, Pat Shurmur’s Minnesota offense ranked second in the league in rushing attempts, so the volume would be ample for Penny in this landing spot. Of course, the Giants have some work to do along the offensive line, but Penny would still be an immediate RB2 in New York.

Given their deficiencies along the offensive line, the Lions are far from an ideal landing spot, but Chubb would also figure to immediate challenge LeGarrette Blount for touches in the power back role. He wouldn’t have the immediate fantasy value of the four aforementioned running backs, but Chubb would be a sneaky bet to break out during the fantasy stretch run in November and December. 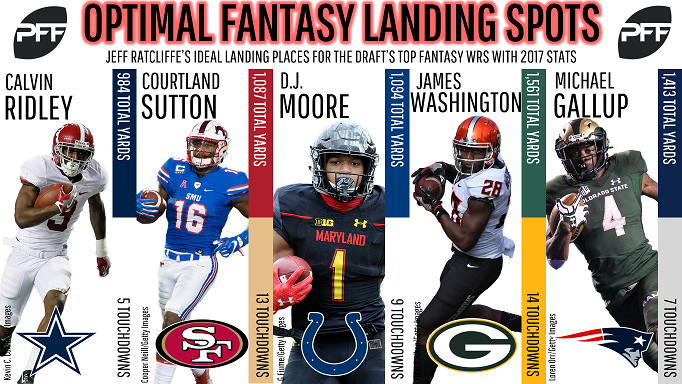 This one is almost too easy. With Dez Bryant out of the mix, the Cowboys will almost certainly be looking for a No. 1 type to fill the void. Ridley doesn’t have the raw upside of someone like Courtland Sutton, but he’s extremely polished as a route-runner and is ready to step on the field as a Day 1 starter. In Dallas, Ridley would immediately command 20-plus percent of the targets, which would be more than enough volume to put him into the back end of the WR2 conversation.

While Ridley would be an instant fantasy factor in Dallas, it could take some time for Sutton to hit in this landing spot. Pierre Garcon is still in San Francisco and figures to be the No. 1 target for Jimmy Garoppolo in 2018. However, Sutton’s long-term appeal is mouthwatering getting to play with the ascending Garoppolo as the potential future X-receiver in Kyle Shanahan’s offense.

Yes, we have the Colts as a destination for both a running back and a wide receiver. The moral of the story from this exercise is that the Colts have a lot of work to do at the skill position spots. With essentially just T.Y. Hilton in house, Moore would step into a good situation in Indy. That is, of course, if Andrew Luck is healthy. While Hilton would still be the top target, Moore’s dynamic upside would pair well. He’d be a sneaky name to target in redraft leagues as a fourth or fifth wide receiver option with the potential to offer WR3 fantasy value in the short-term.

The Packers enter the NFL draft with a somewhat thin wide receiver corps. Davante Adams is the clear top option with Randall Cobb locked into the slot. However, the other outside receiver spot is very much up for grabs. Geronimo Allison is penciled in right now, but Washington would figure to have an edge for the job. The benefit here is that while the Packers do run a lot of three-wide, Cobb comes off the field in two-receiver sets. That means Washington would potentially be an every-down option from the gate. Oh, and Aaron Rodgers would be throwing him the ball.

The underrated talent would fall into immediate fantasy value in this landing spot. Even without Brandin Cooks, the Patriots have depth at wide receiver, but it’s a somewhat underwhelming group beyond Julian Edelman and Chris Hogan. Add to that both players’ recent injury history, and we’re looking at the potential for Gallup to see a solid share of the targets in Year 1.