Fantasy Football: One player at every position bound for a rebound season in 2020

Regression is inevitable in fantasy football — it can strike in either direction, depending on how a player performed the prior season. No player is safe or consistently productive year-over-year.

That's why it’s important to examine players who underperform to identify the issue(s) that plagued them and why their seasons ultimately ended in disappointment. It's the only way to accurately project which players have the potential to rebound in strong fashion moving forward.

The following list offers one player at every position who is destined for a strong rebound season in 2020 fantasy football leagues.

Some may consider playing a full 16-game season a rebound for Big Ben, but he has the potential to do so much more damage. Leaving aside 2019, Roethlisberger has finished as the QB3, QB10, QB17, QB21, QB6, QB9 and QB21 dating back to 2012. Those finishes don’t paint the clearest picture, as Ben’s injury woes have routinely led to shortened seasons, which has obviously affected his point totals and finishes negatively.

Even if we look back to just the 2018 season, Roethlisberger finished third in total fantasy points and 13th in points per dropback among all quarterbacks. No quarterback attempted more passes than Big Ben in 2018, as his 675 attempts were a solid 35 attempts above second place. In addition to an insane amount of volume, Roethlisberger finished first in passing yards (5,129) and fifth in passing touchdowns (34).

His age may be catching up to him, as he ranked 13th in yards per attempt (YPA) and 22nd in average depth of target (aDOT) among all quarterbacks with  at least 100 attempts in 2018. There is a case to be made that those numbers suffered due to his incredibly high volume and not his age, but that remains to be seen as Roethlisberger only suited up for two games in 2019.

Big Ben is the engine that makes the Steelers go, and there isn’t any doubt about it. Here is the comparison between the team in 2018 (with Ben) and 2019 (with the quarterback carousel they deployed).

While we have yet to see what Big Ben will look like post-elbow injury, it’s probably fair to expect a rebound season, mostly because of the Steelers’ propensity for passing the football (high volume), Roethlisberger's history of fantastic fantasy performances and the talent he’s been surrounded with offensively.

PFF’s fantasy projections don’t anticipate a rebound from Roethlisberger, as he’s currently ranked QB30. One major factor that Ben does have on his side is an incredibly friendly schedule — PFF’s strength of schedule (SoS) metric ranks the Steelers’ quarterback schedule as the fourth-easiest in 2020.

Bell’s fall from grace was evident in his 2019 campaign, resulting in a disappointing RB16 ranking across 15 appearances (215 total points). An RB16 finish simply isn’t productive enough for a player who was once the league’s poster boy at the running back position, but there is potential for a strong rebound season from Bell.

Even with how bad the Jets’ offense was last season, Bell managed to rank 14th in yards after contact (653) and 16th in missed tackles forced (41). As a receiver, Bell ranked eighth in yards after the catch, fifth in yards after contact and sixth in missed tackles forced on receptions. The issues for Bell were his lack of efficiency and scoring opportunities, but most of the blame for those two numbers can certainly be chalked up to the lack of competent quarterback and offensive line play. The Jets ranked dead last in red zone plays, goal line plays, explosive plays rushing, explosive run percentage and rushing yards before contact per attempt, and Bell still managed an RB2 finish. Bell’s season almost begins to feel like a monumental feat when you consider his lack of help offensively.

There is reason for optimism moving forward. The first factor is Bell’s volume and workload — he totaled 245 rushing attempts (11th), 74 targets (seventh) and 66 receptions (seventh) in 2019. Even though he didn’t receive much work in the money zone (six carries inside the 5-yard line, ranked 32nd), Bell was fed the ball an extreme amount and was one of the most-used receiving backs in football.

The next factor in Bell’s potential positive regression is the potential improvements on the Jets’ offensive line. While we don’t yet know how Mekhi Becton, George Fant and Connor McGovern will perform, we can at least spotlight the willingness of general manager Joe Douglas to invest a boatload of resources into improving the OL.

Lastly, quarterback Sam Darnold should theoretically appear in 16 games. While Darnold has yet to justify his draft status or even inspire confidence in his abilities as a franchise quarterback, he’s still a far more effective option than backups Luke Falk and Trevor Siemian. In the three games Darnold missed (Weeks 2, 3, 5), the Jets scored one offensive touchdown, ran five red zone plays and zero goal line plays. The offense needs to play better with Darnold in the mix, but it proved dreadful without him.

The following chart displays Bell’s production on a per-week basis. The decent scoring outputs during weeks Darnold missed can be attributed to a severe increase in receptions (pass-game usage), which is always a plus in full-point PPR formats. 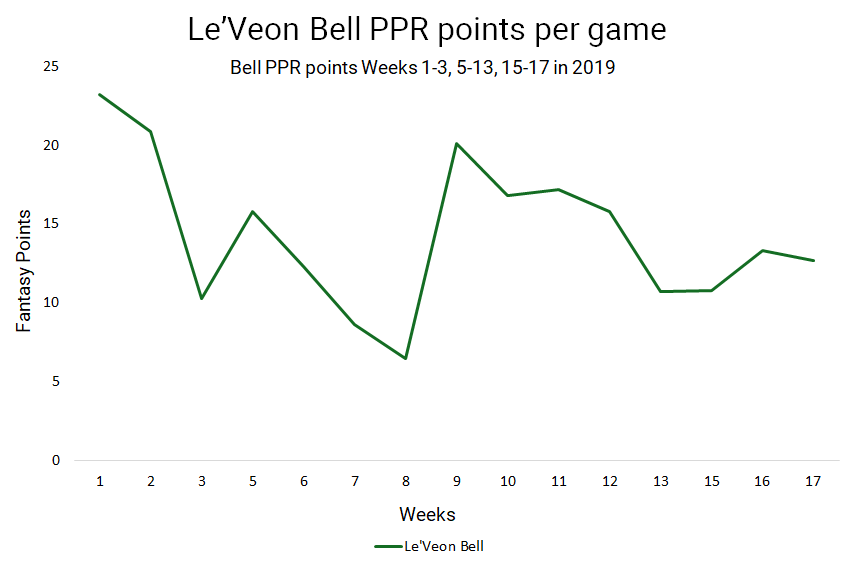 PFF’s fantasy projections view Bell as a borderline RB1, ranking him RB13. Another major positive for Bell is the third-ranked schedule he’ll see in 2020, according to PFF’s SoS metric.

Arguably the league's premier vertical threat, Jackson teased just how much juice remains in his tank in three short games in 2019. The electric player known as “Jaccpot” registered only 38 receiving snaps, yet he pulled in nine of his 10 targets for 159 receiving yards and two touchdowns, most of which came against the Washington in Week 1.

We have yet to truly experience what the duo of Jackson and Carson Wentz can accomplish, but they appeared to have immediate chemistry and could potentially form a dangerous playmaking duo in this upcoming season. Jackson’s fantasy totals dating back to 2015 aren’t exactly impressive (WR43, WR45, WR37, WR66), but much of that has to do with a lack of health or usage. Jackson appears to be in a good spot with the Eagles.

The lack of a true deep threat of Jackson’s caliber hamstrung the Eagles’ offense in 2019, as evidenced by Wentz’s 28th-ranked YPA and 23rd-ranked aDOT figures. They also ranked 21st in explosive plays passing (15-plus yards downfield) and 27th in explosive pass percentage (12.3%) — all these numbers could stand to improve and likely would have if Jackson was dealt a different hand in terms of injury.

Jackson — the Eagles’ primary deep threat — was added by general manager Howie Roseman in hopes of operating as the vertical piece the offense was missing, and theoretically the marriage would’ve worked perfectly. Dating back to 2010, Jackson ranks second in aDOT (16.0), first in receiving yards per reception (17.6) and 12th in yards per route run (2.04) among all receivers with 500-plus targets. Wentz, on the other hand, has performed decently on passes that traveled at least 15 yards downfield — he ranks 13th in yards and 10th in touchdowns dating back to 2016.

Arguably, the biggest hurdle for this duo is their lack of health — Jackson hasn’t registered a 16-game season since 2013 (his final year in his first stint with Philly), and Wentz has obviously suffered his fair share of injuries, though he did appear in 16 games last season. If the two are capable of staying healthy, they possess a massive ceiling even with the addition Jalen Reagor and an already loaded roster that includes Zach Ertz, Dallas Goedert and Miles Sanders.

Although he’s never lived up his lofty draft status, Ebron has put together strong seasons in the past. Since entering the NFL, he has finished as the TE27, TE4, TE13, TE14, TE13 and TE40. Ebron’s best season came in 2018, which should come as no surprise as his volume and usage led to a highly productive season — Ebron ranked fourth in targets (108), first in touchdowns (13), third in red zone targets (31) and first in end zone targets (18). While his usage in 2020 with the Steelers may not look identical to that of his 2018 season, it’s fair to expect an improved performance with the upgrade from Jacoby Brissett to Roethlisberger at quarterback.

Dating back to 2015 (excluding his rookie season), Ebron ranks fourth in targets (389), eighth in receiving yards (2,947), fifth in touchdowns (26), 10th in explosive pass plays (54) and 17th in yards per route run (1.53) among all tight ends with 100-plus targets. Looking at just targets in the end zone, Ebron ranks fifth (36) among all tight ends over the same timeframe. Ebron’s usage in the money area is highly encouraging, particularly when you factor in the Steelers’ ability to reach the most important part of the field — they rank 14th in red zone plays (719) and 15th in goal line plays (176) dating back to 2015, and that includes the struggling offense in 2019 that performed with less than optimal quarterback play.

The Steelers’ offense as a whole is a prime candidate for positive regression moving forward, and a lot of that simply has to do with the health of Roethlisberger. If Big Ben can hold up, every player on the offense will benefit. This is an offense that has proven to be productive historically — all of its skill players are worth targeting in 2020 fantasy drafts.

PFF’s fantasy projections anticipate a TE21 finish for Ebron, which would be a slight improvement from his 2019 campaign. Like many players on this list, Ebron will benefit from his schedule — PFF’s SoS metric ranks the Steelers’ tight end schedule as the 10th-easiest in 2020.