Get ready for an extremely high-scoring week of fantasy football, as there are five games with at least a 50-point projected total, green-lighting the Week 2 main slate as the premier slate you won’t want to miss for DFS.

As always,  I'll take a deep dive into each position from each game and provide DraftKings picks, sleepers, starts, busts and values with consideration for injuries and other fantasy-relevant news and notes. Reviewing what went right and what went wrong from last week will also help refine the lineup construction process.

Consider this your go-to guide for all things fantasy football and DFS related to ensure that Sundays are not just extremely fun but profitable as well.

The majority of Week 1 winning tournament lineups featured a combination of Patrick Mahomes and Tyreek Hill — two of the most expensive players on the slate at their respective positions.

Odds are that paying up at quarterback will once again be the optimal move in GPPs for Week 2 because there are so many shootouts on deck. The Atlanta Falcons at Tampa Bay Buccaneers, San Francisco 49ers at Philadelphia Eagles, Minnesota Vikings at Arizona Cardinals, Dallas Cowboys at Los Angeles Chargers and Tennessee Titans at Seattle Seahawks are all matchups that could easily hit massive totals.

Justin Herbert stands out the most for me when considering his price ($6,700) and upside compared to the other signal-callers in this range. The Chargers quarterback finished Week 1 fourth in PFF passing grade (83.8) and expected fantasy points. Herbert should have thrown 3.9 touchdowns as opposed to the singular one he did connect on. 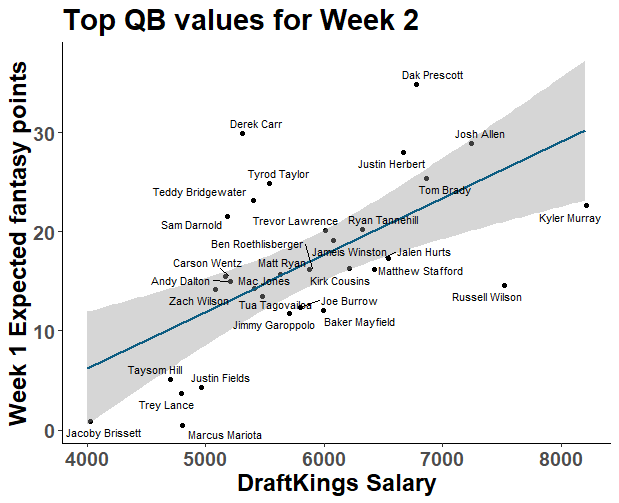 The NFL's reigning Rookie of the Year also saw elite protection from his revamped offensive line. Despite facing the fearsome Washington Football Team front four, no quarterback was pressured less than Herbert in Week 1 (12.2%). Herbert is going to have all day to throw and should easily pick apart the Dallas secondary.

The Cowboys’ top two pass rushers — Randy Gregory, Demarcus Lawrence — will not be available on Sunday.

The LAC-DAL contest is the only game with a 50-point-plus total that also features a spread of fewer than four points. That suggests the game will be more competitive, which should keep both offenses humming through all four quarters. Both teams finished top-four in total offensive plays run last week, so prepare for a plethora of fantasy points to be scored.

Cowboys quarterback Dak Prescott also benefits from the high-scoring game environment so for $100 more, mix him into tournament lineups as well. The face of Big D’s franchise scored more expected fantasy points (34.8) last week than any other quarterback.

Quarterbacks outside the LAC-DAL game to look for next are Kyler Murray ($8,200) and Russell Wilson ($7,500). Both quarterbacks are priced up, but it’s for all the right reasons, as each is set to smash this weekend.

Murray was the cover boy to the DFS cheat sheet last week before scoring more fantasy points than any other QB. His ability as a dual-threat runner and passer makes him a deadly asset, and it’s terrifying to think what he will be able to do playing at home inside a fast-track dome.

Minnesota’s defense could barely generate pressure against Joe Burrow in Week 1 — 25% pressure rate, 24th in Week 1 — so there’s no reason to think that Murray won’t reap the benefits of operating from a clean pocket. Versus the Titans, Murray threw for 255 passing yards and three touchdown passes when kept clean.

Wilson should find equal success when he takes on the Titans because they just cannot generate enough pressure. Against the Arizona Cardinals, they generated pressure on just six of 37 dropbacks (16.2%) — the second-lowest mark in Week 1.

With Wilson operating cleanly from the pocket, he will dice the Titans secondary to shreds. When the Seahawks quarterback threw from pristine conditions versus the Indianapolis Colts, he finished Week 1 as PFF’s second-highest graded QB (91.3). Wilson averaged 14.1 yards per attempt and posted a perfect quarterback rating.

I fully expect Wilson to hit multiple deep shots to DK Metcalf. The Tennessee defense allowed the most 20-plus air yard receptions, and Wilson is PFF’s highest-graded quarterback on 20-plus air yard throws (99.9) since 2018. Metcalf ranked third in the NFL last season in deep target share (44%).

For cash games (double-ups, 50/50s), Jalen Hurts remains the lock. His new $6,500 salary has barely moved from last week, and the San Francisco 49ers defense is not nearly as formidable as the perception of it. Jared Goff was able to put up nearly 30 fantasy points on their 20th-ranked secondary that just lost starting cornerback Jason Verrett to a torn ACL.

Hurts was extremely sharp in his season debut — PFF’s second-highest graded quarterback on the week (89.5) — so have confidence that he continues to produce in Week 2. The second-year QB’s rushing chops — second in rushing yards among QBs in Week 1 — gives him a super high floor.