The NFL scouting combine arrives in Indianapolis on March 1st, bringing the best college prospects together for a week of measurements, drills, workouts, medicals and interviews. Their importance depends on what you’re measuring to predict: draft position or fantasy football value.

The relationship between the two is fairly strong across positions, but contrasting draft position and fantasy football value gives additional insight into systemic errors teams can make in over/underweighting certain traits, especially for positions where real and fantasy value closely align — such as wide receiver.

Instead of attempting to predict “real” football value, I’m going to look at fantasy football value, specifically targeting top weekly fantasy finishes in a prospect’s first three seasons. I’m going to analyze all of the offensive skill positions, varying the threshold for top weekly finish depending on the position's availability and common roster requirements. For instance, I’m using a cutoff of top-six weekly finishes for quarterbacks, but all the way down to top-24 for running backs and wide receivers. All fantasy targets are based on playing in a point-per-reception (PPR) format.

The plots below give the coefficient for each measurement or drill denominated by standard deviation within the position group. The draft positions and fantasy finishes for position groups are translated to percentile, giving both the same scale. Each bar below represents the amount of percentile movement that is expected for a player with one standard deviation above or below the positional average.

The sample for this analysis covers all players who participated in all drills or all but one drill from 2006 to 2019. For players who missed a drill, the value was estimated through a regression on the remaining variables then discounted with the assumption the drill was skipped with an expectation of underperformance. Players who participated in the combine and never played in the NFL are excluded from the sample. All jumps and timed drills are weight-adjusted.

Below each plot, I’ve included a table with the top projections for positional fantasy finish percentile (first three seasons) in the 2006 to 2019 period, including the players’ combine marks and their actual top weekly finishes. 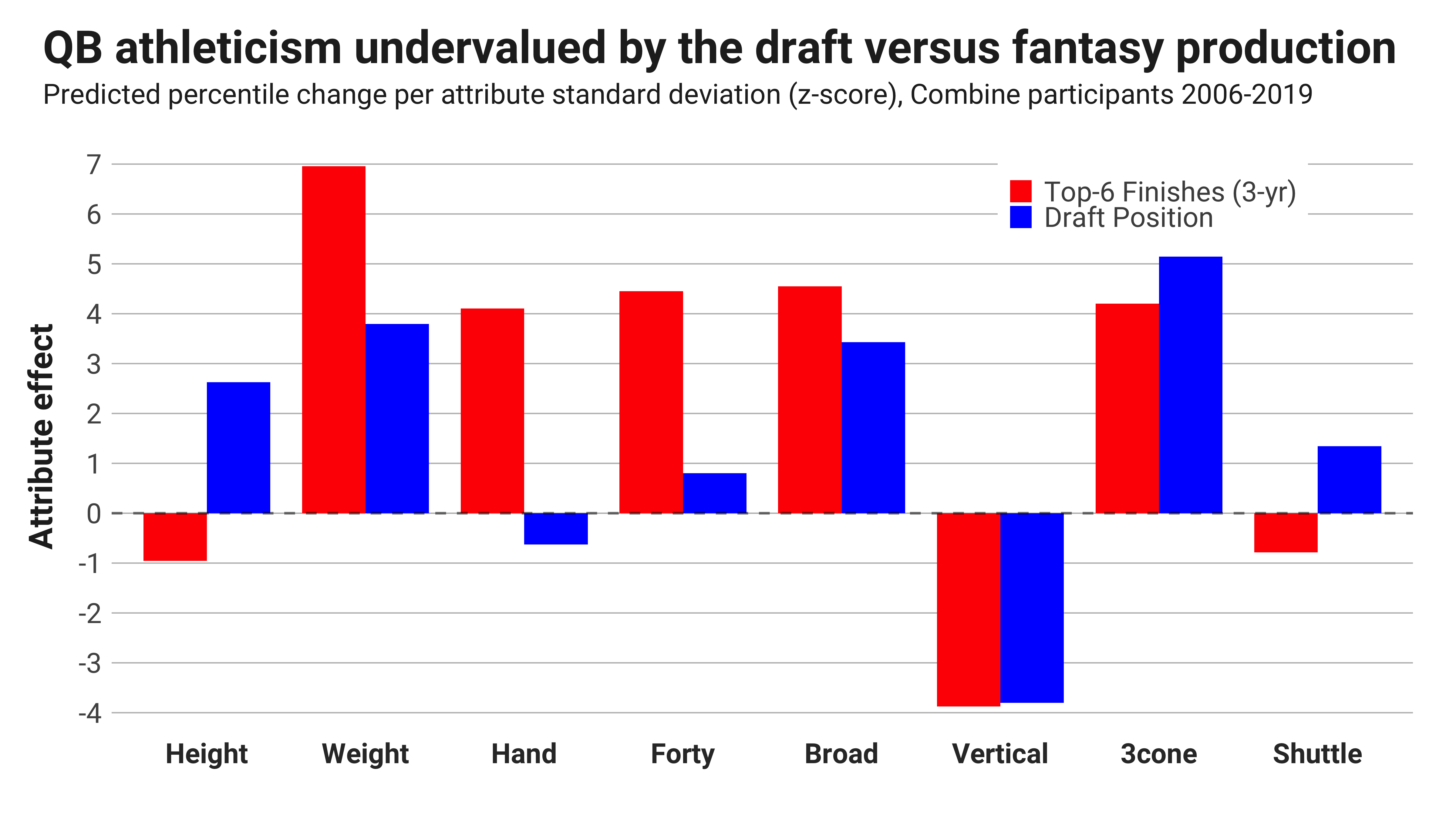 It shouldn’t surprise anyone who plays fantasy football that quarterback athleticism has become a dominating factor in the position’s value. Quarterback size, speed and agility are all important factors in predicting fantasy success, though paradoxically vertical jump and short shuttle aren't. If you’re looking at quarterback success through a longer lens, be aware that rushing becomes a smaller portion of the production pie as quarterbacks age, meaning it’s overstated with the target variable in this analysis only looking at top fantasy finishes in each prospect's first three seasons.

Highly successful early career quarterbacks — such as Cam Newton, Josh Allen and Andrew Luck — all fit the prototype for fantasy success, as Newton and Luck posted the best predicted success percentile among the 84 quarterbacks in the 2006-2019 draft sample. 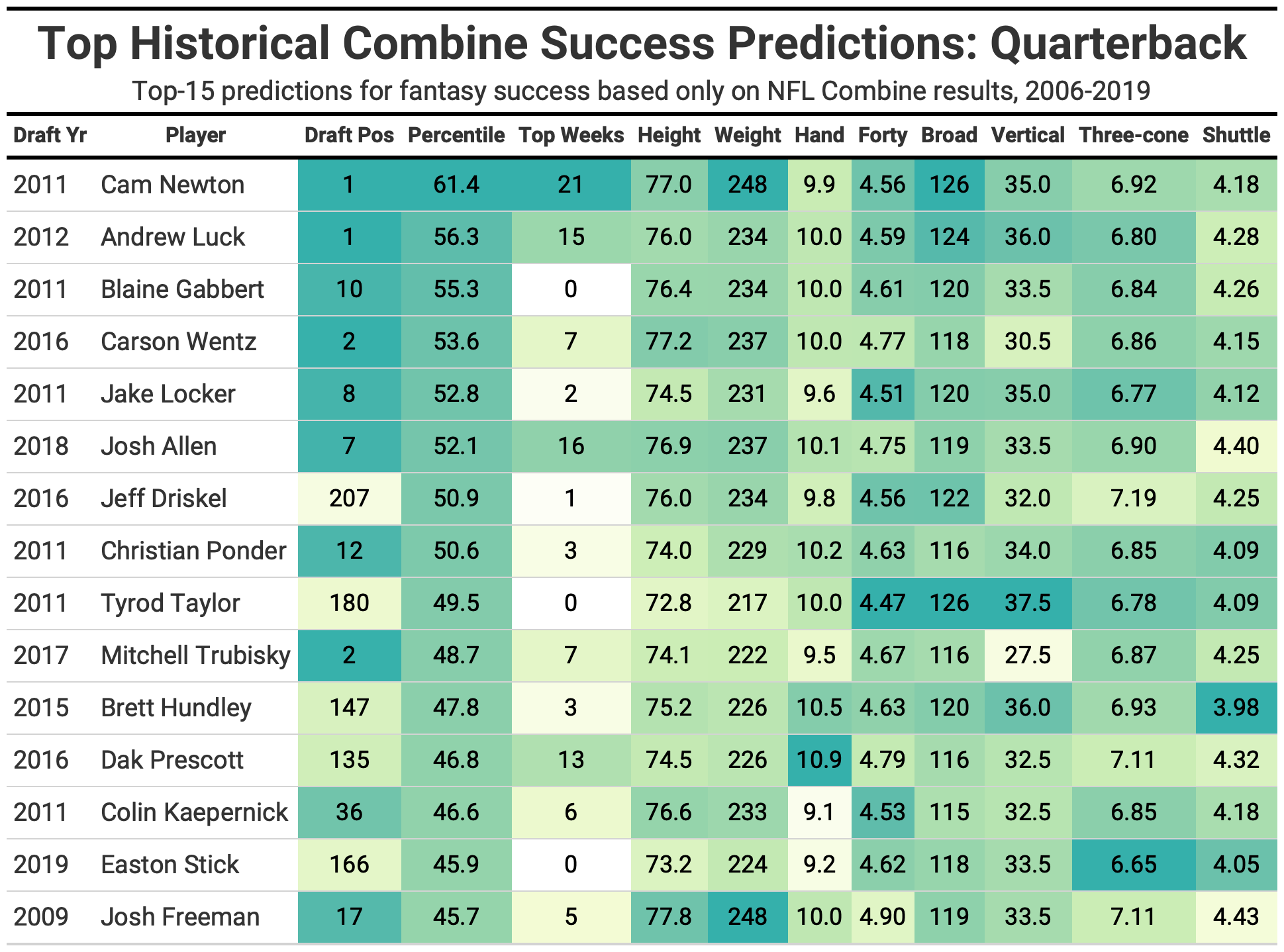 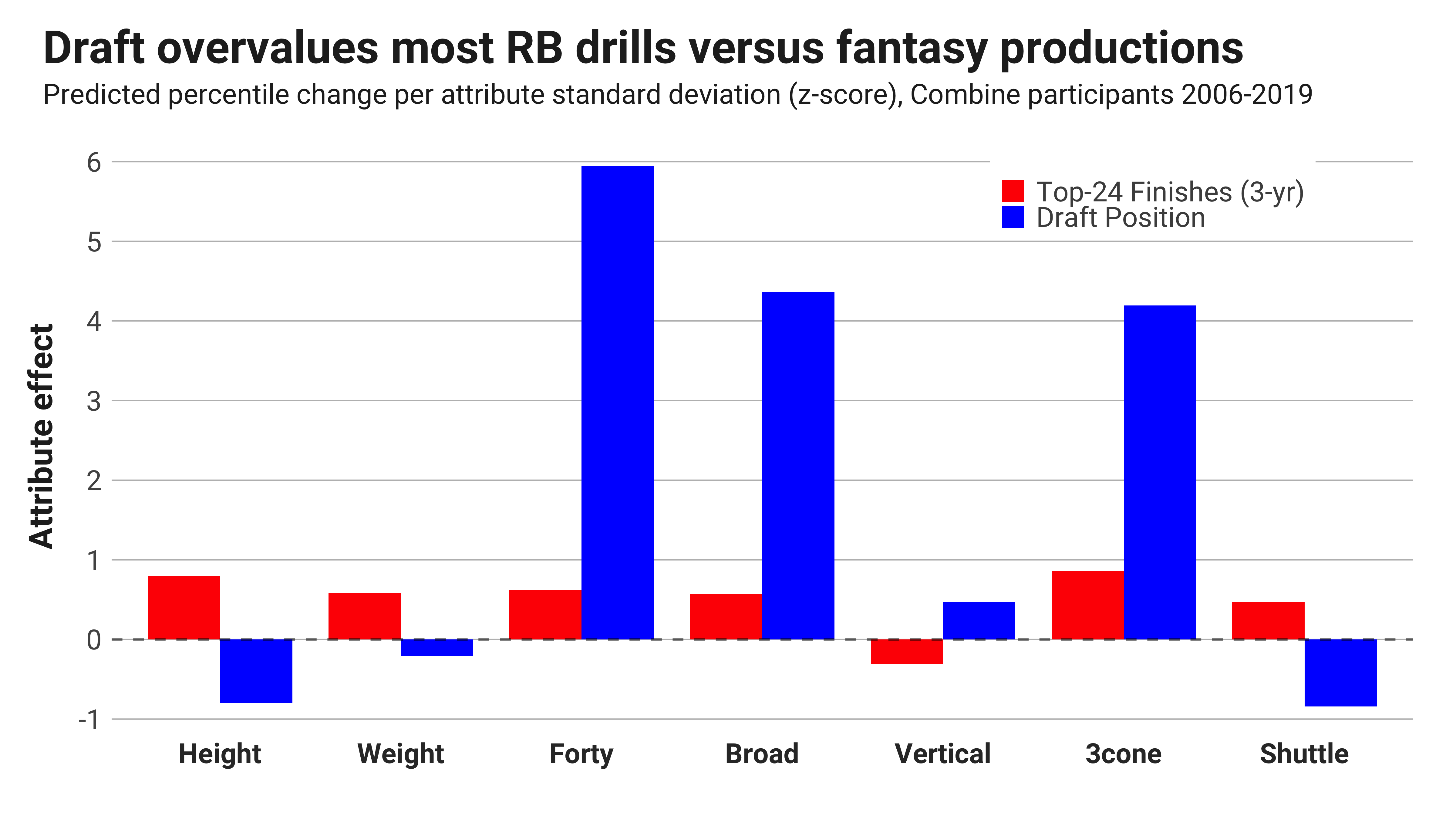 Unlike quarterbacks, a running back's athleticism is overvalued in the NFL draft versus fantasy football, especially in regards to the 40-yard dash. It’s not that being a good athlete doesn’t matter at the position, but it’s more likely that the selection bias in who is even invited to the combine in the first place means a group of highly capable, athletic running backs are revealing marginal differences, not make-or-break results.

There are slight leanings toward size and shuttle times being undervalued in the NFL draft for fantasy success, but the reality is that situation and opportunity are king at the position. 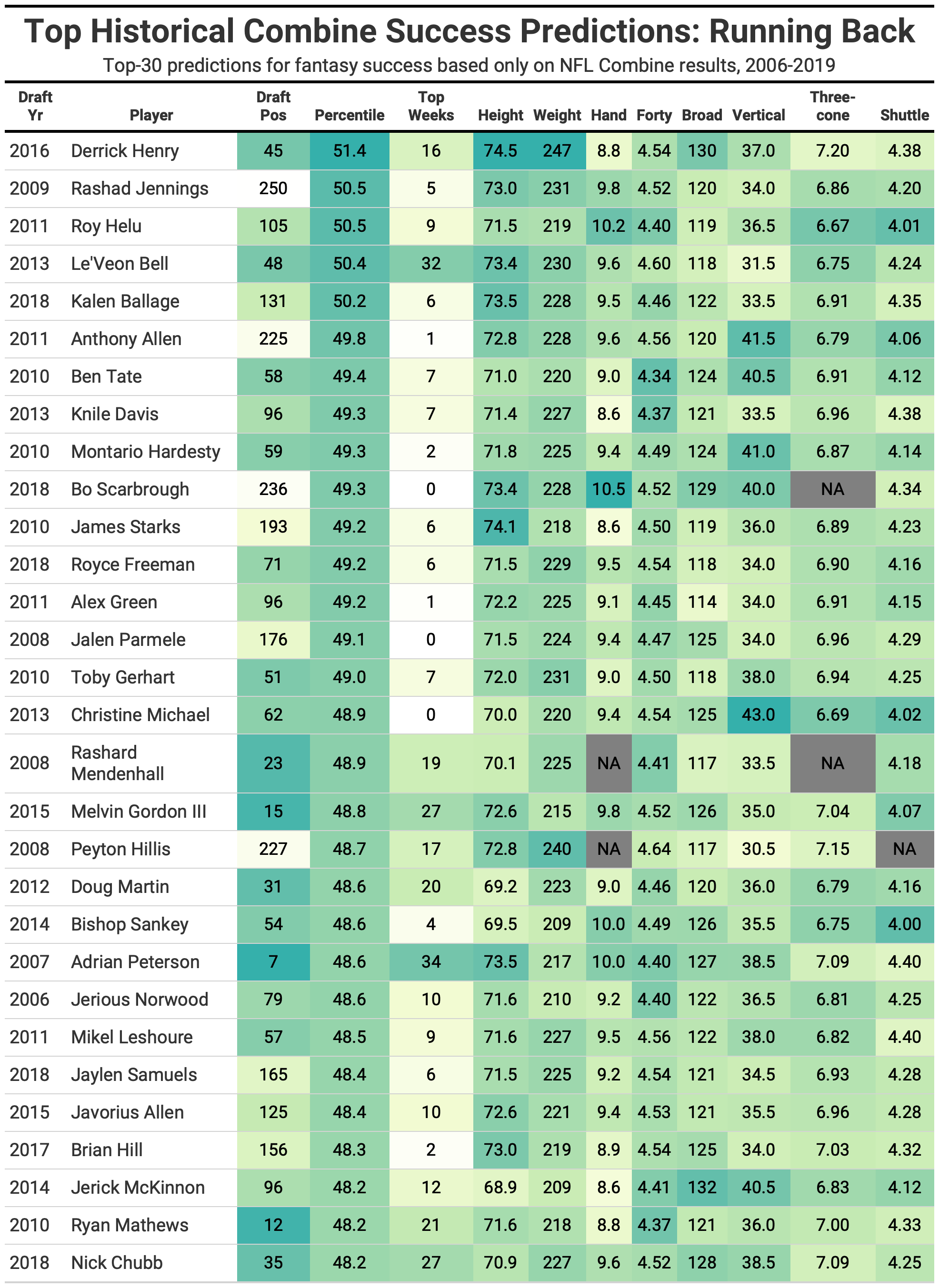 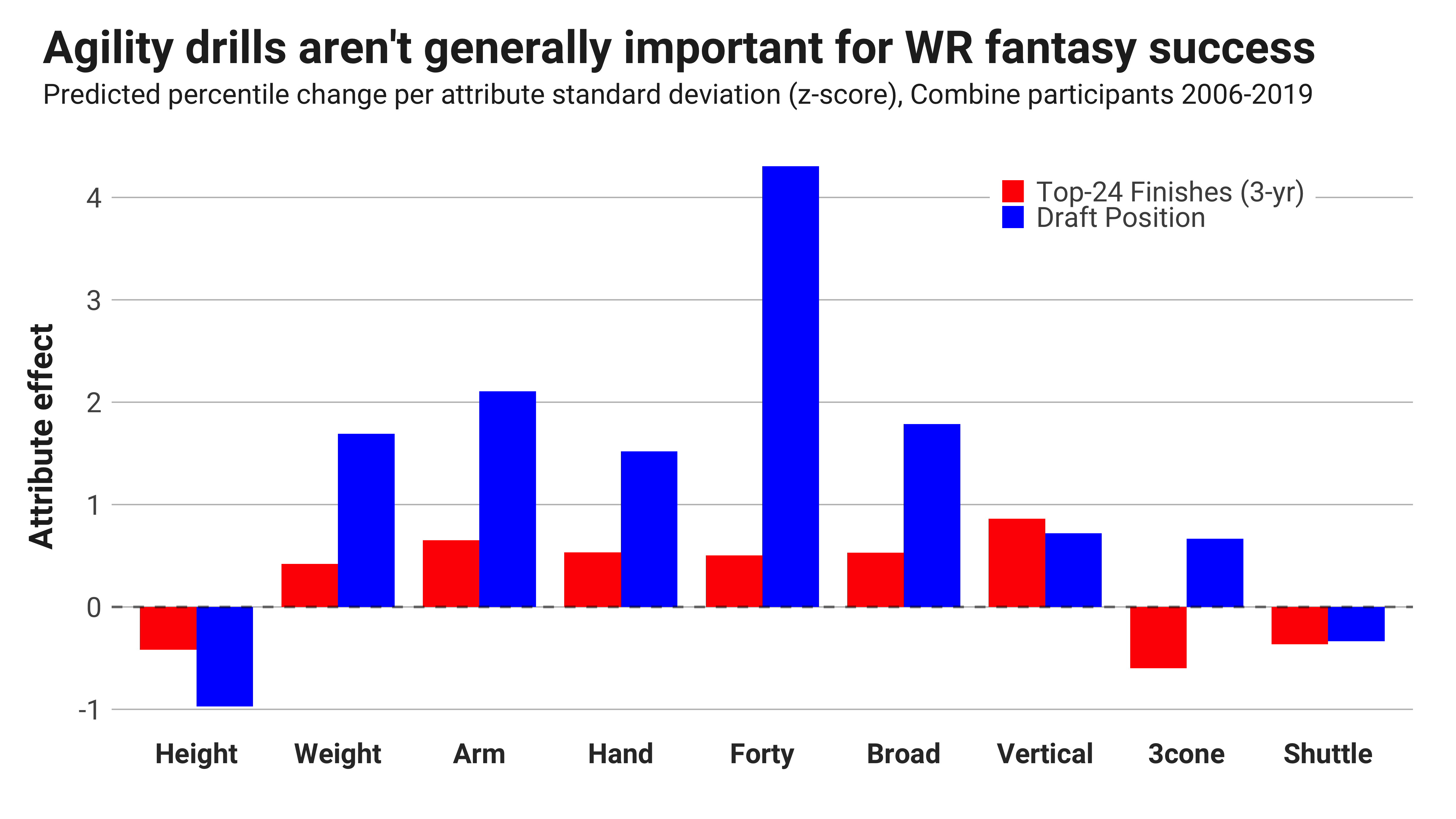 As was the case with running backs, wide receiver performance at the combine is generally overvalued in relation to the actual production they put on the field early in their careers. In fact, the three-cone drill and short shuttle are negatively correlated with fantasy success when we remove draft positions from the equation.

The vertical jump is the one drill that boasts a higher correlation with fantasy success than draft position, which might be something to pay attention to while others are hyper-focused on the 40-yard dash and agility drills.

I wouldn’t fully fade the agility drills, as a few relatively poor agility receivers — such as D.K. Metcalf, Deebo Samuel and Mike Evans — skew the results. Receivers are unique in the fact that they can be successful with very different body types, meaning the importance of agility drills for a taller, bigger receiver will differ greatly from a diminutive receiver who will operate primarily in the slot. 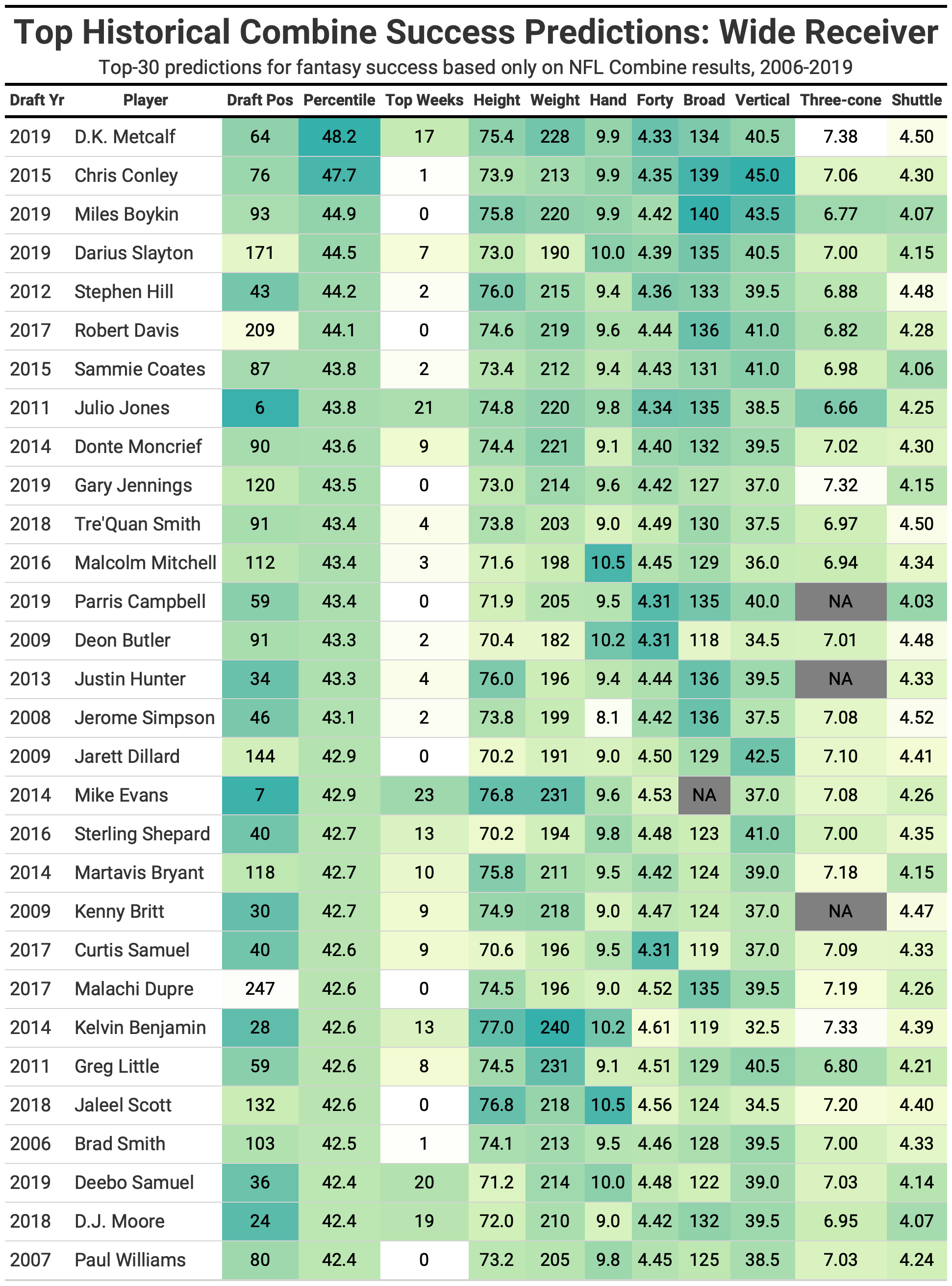 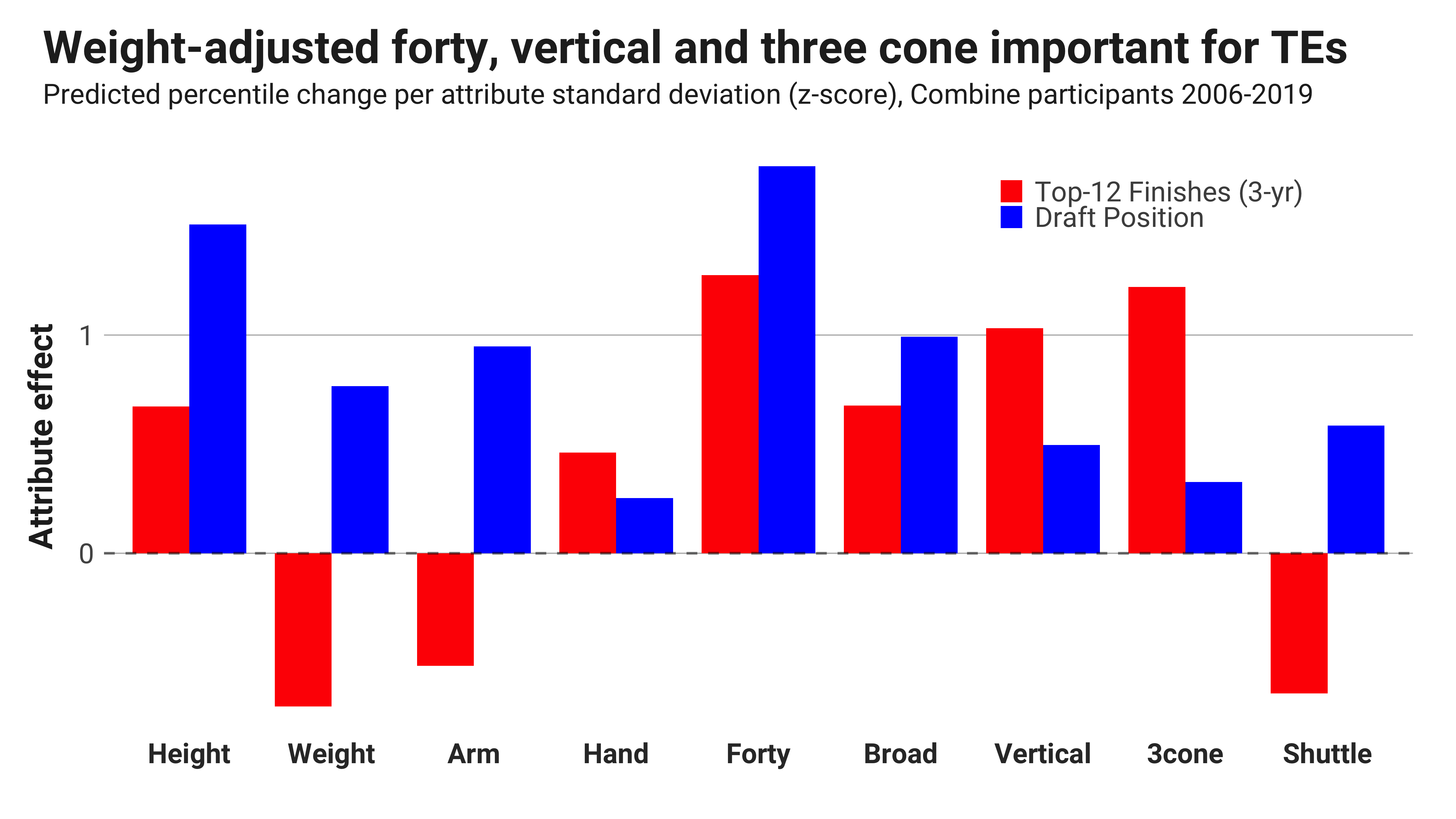 Unlike running backs and wide receivers, NFL front offices and fantasy managers can learn a lot by focusing more heavily on athletic testing for tight ends. Of course, NFL teams value traits such as blocking more than fantasy managers, but those qualities are also more replaceable.

Wide receiver-like tight ends (i.e. those who are taller and less heavy) should be the focus, as the vertical jump and three-cone are undervalued while the 40-yard dash is almost properly valued. When in doubt, front offices should throw darts at highly athletic tight ends rather than grinde the tape on blocking and route running nuances.

I admit to bending my rules and allowing George Kittle into the top-15 tight end projections despite the fact that he missed one more than more drill, but he’s a perfect illustration of the value available later in drafts when a team takes calculated shots at the right athletic profile. 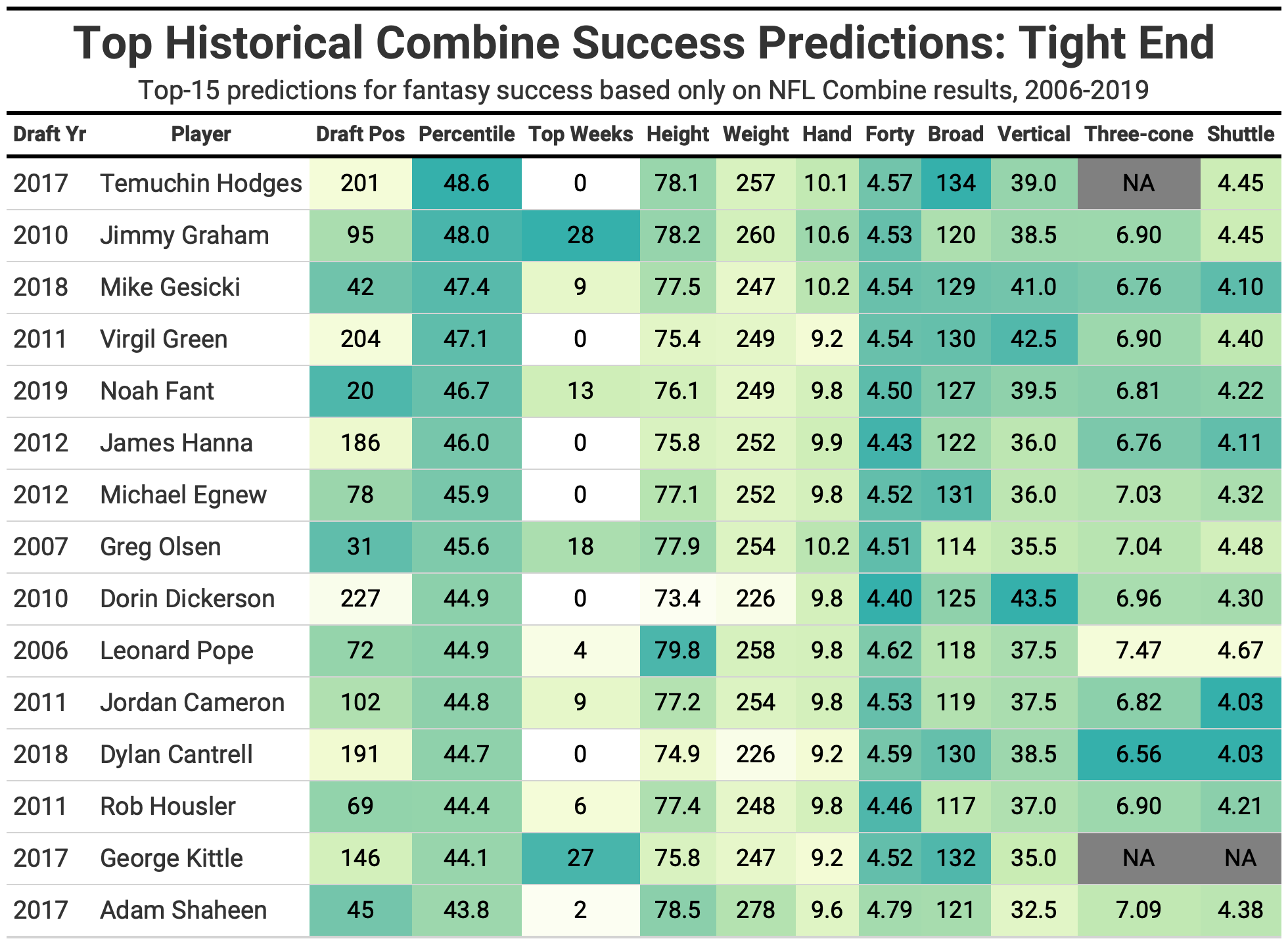