The running back position has undergone a sharp devaluation over the last few years. With the rise of pass-first offenses in the NFL, the importance of the position's role on the ground has diminished, leaving many to see it as a position no longer worth investing in, both in terms of draft capital and free-agency dollars. This evolution, however, has left the door open for the elite running backs to reestablish value with their ability to operate as receivers in the passing game.

Ekeler is one of the NFL’s premier receiving backs. Not only is he incredibly dynamic with the ball in his hands, but he’s also a natural as a receiver and has a penchant for turning seemingly small gains into massive ones. Ekeler’s 93.7 PFF receiving grade ranked first among all running backs in 2019. In fact, Ekeler’s 2019 stats were downright dominant across the board.

Ekeler’s efficiency and raw dominance will likely carry over into 2020, even with the change at quarterback from Philip Rivers to Tyrod Taylor. From 2015-2017, Taylor attempted the 14th-most passes to running backs, and his 68.5% accurate throw rate on such passes actually tied with Rivers for 11th among qualifying quarterbacks over that span.

It doesn’t appear that any major statistical drop-off is in Ekeler’s future, especially when you consider Taylor’s athletic ability, which could actually help the Chargers’ running backs produce. The last part of the equation is the departure of Melvin Gordon, which opens up an additional 52 targets for the remaining Chargers players.

PFF’s strength of schedule metric (SoS) ranks the Chargers’ running back schedule as the 10th-easiest in 2020. In addition, PFF’s fantasy projections expect Ekeler to produce a strong season, ranking him 11th among running back scoring with 244.6 points.

White may offer virtually nothing as an actual running back, but his upside in the passing game is tremendous. Essentially just a receiver who happens to line up in the backfield, White's 274 targets over the last three seasons rank third among running backs in that span. His 645 receiving yards ranked third among running backs last year, while his 1.91 yards per route run ranked fifth among backs who saw at least 25 targets.

The transition at quarterback from Tom Brady to Cam Newton will surely bring forth some questions, though White’s importance and role in the offense seem solidified, regardless of which quarterback operates the offense. And given the Patriots' lack of true playmaking options at receiver, White’s impact on third and fourth downs — where he ranked first in targets (39), receptions (28), receiving yards (276) and first downs (17) among all running backs last year — will remain of the utmost importance.

PFF’s SoS metric ranks White’s schedule as the seventh-easiest in the NFL in 2020, while PFF’s fantasy projections expect an RB34 finish for the seventh-year back.

Hunt is one of the best all-around running backs in football, mostly due to his ability to dominate both on the ground and through the air. And while he was forced to miss the first half of the 2019 season due to suspension, he returned to the Browns lineup from Week 10-17 and ranked sixth in targets (43), fourth in receptions (37), third in yards after the catch (283) and second in receiving yards after contact (132) among running backs over that period. In addition to those dominant totals, Hunt was also able to force 15 missed tackles on receptions and create five explosive pass plays (15-plus yards), second and third, respectively, among running backs over the second half of the season.

The unfortunate part of Hunt’s situation is that he does share his backfield with another dominant running back in Nick Chubb, though newly appointed head coach Kevin Stefanski has shown that he may be able to support a strong workload for both players. Stefanski deployed two-RB sets at the third-highest rate in the league (254 snaps) as an offensive coordinator with the Minnesota Vikings in 2019, so expect both Hunt and Chubb to receive a solid workload — the former as the receiving back and the latter as the rusher. Here’s a look at their production comparison in 2019. 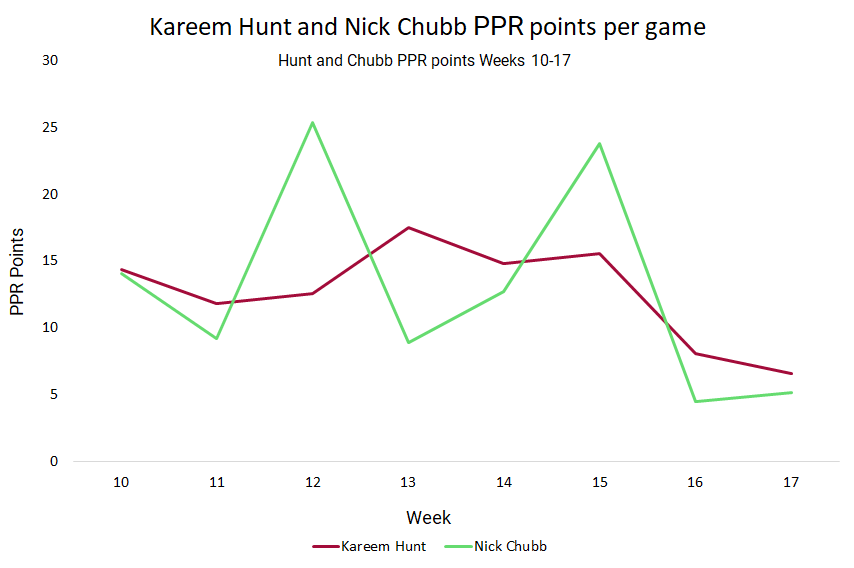 PFF’s SoS metric anticipates a tough schedule for the Browns’ running back group in 2020, ranking their schedule as the 27th-best. PFF’s fantasy projections expect the backfield to be productive either way, with Hunt ranked as the RB25 and Chubb ranked as the RB6.

Sanders and Scott are currently on opposite ends of the spectrum. As of now, Sanders is one of the most sought-after running backs in all of fantasy football, with an average draft position (ADP) of 11.44 (RB8) since the beginning of July according to BestBall10’s drafts. On the other hand, Scott is a great option for zero-RB strategists looking to invest as little as possible into the RB position. Scott's current ADP lands at 128.32, or RB50.

The reason both players make the list is that both Scott and Sanders are productive receivers, and both players possess the skills to make an impact as receivers once again in 2020.

Miles Sanders and Boston Scott: Statistics and rankings among RB’s with 25-plus receptions | 2019

Although it is a tiny sample size, Scott’s main impact came from Week 14 onward, as he never registered more than 19% of the Eagles’ offensive snaps in any game prior to Week 14.

To be fair, Sanders ranked highly across the board; Scott just happened to outperform him in what was a spectacular performance over the final four weeks of the season. As you can see from the chart below, both players were able to produce a ton of fantasy points during their last four weeks of play. 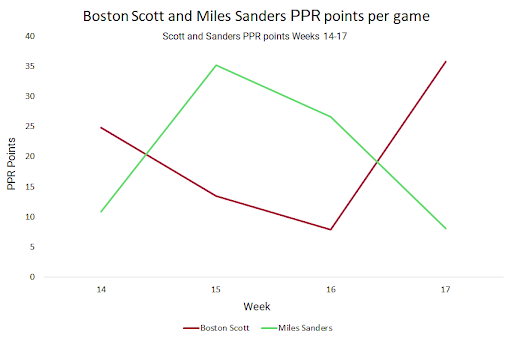 The Eagles invested heavily in the wide receiver position this offseason, likely leaving less playing time on the table for Scott. With that being the case, Scott is likely to be a specialty player used in a gadget-like role to open the season, though his insane efficiency and tackle-breaking ability should certainly keep him in the rotation. Expect Scott to open the season as a great handcuff, though he could develop into something further if the Eagles happen to succumb to injuries once again.

The Eagles’ running back schedule isn’t going to be a cakewalk by any means, as PFF’s SoS metric ranks their schedule as the 31st-best in 2020. PFF’s fantasy projections expect a great season out of Sanders, ranking him as the RB9, while Scott ranks as the RB54.

Two of the NFL’s premier receiving backs are now going to share a backfield in Houston, with both Johnsons vying for playing time alongside quarterback Deshaun Watson.

Watson only targeted his running backs a total of 69 times in 2019, a figure that ranked 23rd in the league among all quarterbacks. Duke received 62 of those targets, leaving behind only a handful for the remainder of his backfield running mates. With David Johnson now added to the picture, the hope is that Watson targets the backfield more often, particularly with some of the 146 vacated targets DeAndre Hopkins leaves behind.

Both Johnsons showcased their abilities in 2019. David ranked fifth in yards per target and seventh in yards per reception, while Duke's 71.0 receiving grade ranked 11th among backs who saw at least 30 targets, one spot below David (74.5).

Sharing a backfield will make it tough for either player to reach their true peak potential in the passing game, though the Texans only ranked 16th in snaps played in two-back formations (104). Head coach Bill O’Brien could look to expand his playbook by utilizing both of these players, as an increase in two-back formations would exponentially increase the chances for both players to contribute simultaneously.

PFF’s SoS metric believes that the Texans’ running back group has the third-easiest schedule in the league this season. PFF’s fantasy projections peg David Johnson as the RB18 and Duke Johnson as the RB38.

Kamara’s dominance — and head coach Sean Payton’s penchant for utilizing him — is easily noticeable, and that should not change in 2020. Playing in a high-powered offense with weapons like Michael Thomas, Jared Cook and Emmanuel Sanders, Kamara should once again have the matchups required to dominate the lesser competition.

PFF’s SoS metric anticipates an average schedule for Kamara and his backfield teammates, with a 19th-placed running back schedule. PFF’s fantasy projections expect an RB2 season from Kamara, while his projected total of 308.4 points falls second to only Christian McCaffrey among running backs.

There really isn’t much to say about McCaffrey that hasn’t already been said. In a time where running backs have been devalued, McCaffrey’s ability at the position — both a rusher and a receiver — is second to none.

The Panthers offense enters the 2020 season with a few unknowns in new head coach Matt Rhule and a new quarterback Teddy Bridgewater. And even though we don’t know what the offense will look like or how it will be operated, one thing is for certain: McCaffrey is going to get more than enough work to help justify his current 1.05 ADP.

The schedule for the Panthers’ running backs isn’t a great one, as PFF’s SoS metric has the schedule ranked as the 29th-best in 2020. Despite this, PFF’s fantasy projections currently have McCaffrey ranked as the RB1 and predict him to amass a total of 320.7 fantasy points.