Fantasy football mock drafts: A rookie mock coming out of the NFL draft

Now that we know where all the rookies will start their NFL careers, the fantasy football intrigue can focus on their value. The most crucial bit of information about a football player’s fantasy stock is of course his opportunity, so the most important time for evaluating fantasy value is the draft.

The savvy fantasy analyst will have rankings in place, at least rough ones, before the draft, but afterward we can really put our expectations into action by combining our player evaluations with landing spots.

To that end, after the draft the PFF Fantasy team got together with some non-PFF folk to conduct a 12-team, six-round rookie dynasty mock. PPR league, single-QB, non-snake. The participants:

With that group, here’s how the rookie mock played out: 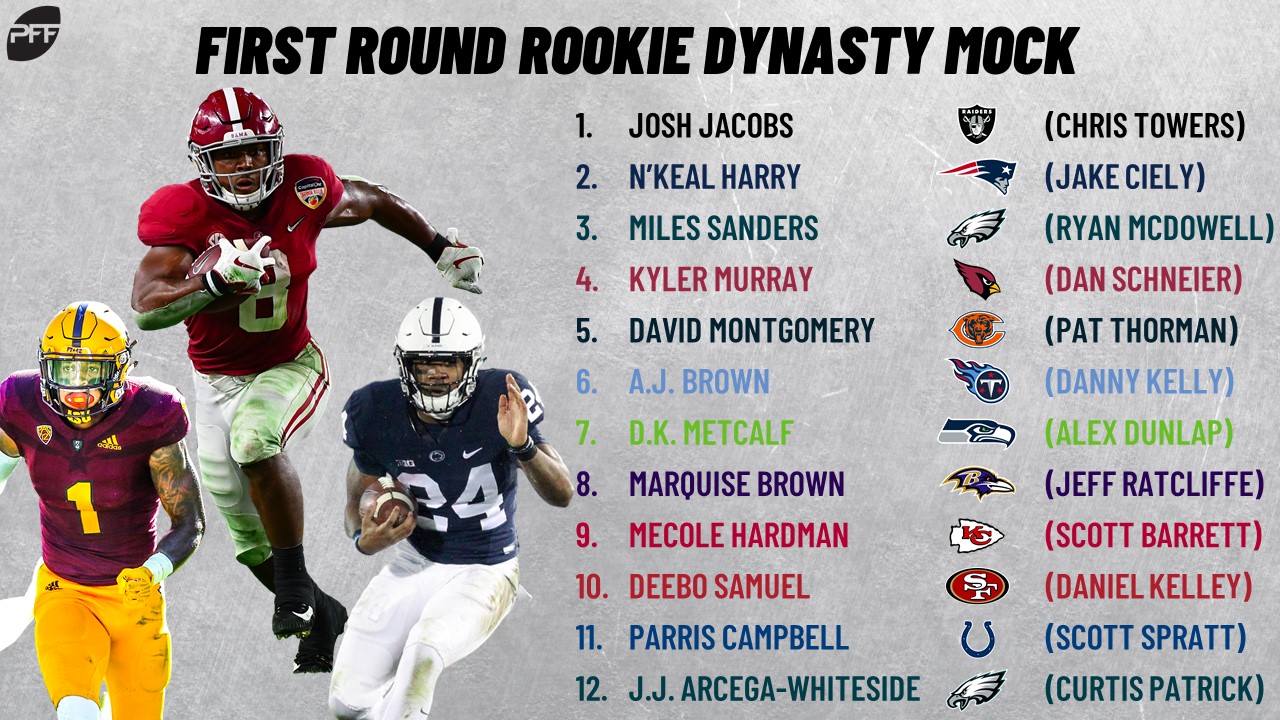 Jacobs was already the likely No. 1 pick in most rookie drafts coming out of the NFL draft based on his high fantasy potential and clearest line to a starting job, but this week’s injury to Isaiah Crowell cemented that, just about locking him into a big-time role from Week 1. He was Jeff Ratcliffe’s No. 1 rookie back in dynasty before the draft.

Where Murray goes in drafts this year is probably going to be the primary storyline of all rookie drafts. He carries as much fantasy potential at quarterback as just about any recent entry into the league, but it is at quarterback, the deepest position in the game right now for a single-QB league. Murray could genuinely be a QB1 in his debut season. The question is just whether that is worth it in a league where starting-caliber quarterbacks can run as much as 20 deep. He’s 16th in our staff dynasty rookie rankings, ranging from ninth overall to 20th.

Metcalf’s value has been the hardest to pin down for months now. He was the star of the combine, for both good and bad reasons, and that had him as high as first overall in rookie wide receiver rankings, but also had him slip to the very end of the second round in the real NFL draft, the ninth wide receiver off the board. Still, landing in Seattle with the potential that Doug Baldwin’s career is over is about the best landing spot a rookie could ask for outside of N’Keal Harry’s destination in New England. Metcalf was the third receiver off the board in this draft.

Hardman was probably the biggest dynasty riser in the draft. He was only 25th on Jeff Ratcliffe’s pre-draft rookie receiver rankings, a raw prospect with only 60 catches in three years. But an early draft pick and landing spot with the Chiefs and the possibility that Tyreek Hill’s tenure is over give Hardman extreme appeal as a potential top target for the league’s top fantasy quarterback. Hardman shot up the post-draft rankings and was the fifth receiver off the board in this draft.

In Fant and Hockenson, we have two college teammates at the same position both going in the first round of the NFL draft and likely becoming their teams’ starters early if not immediately. You’ll forgive me for lumping them together into one group in this space. Jeff Ratcliffe had Hockenson ranked first, just ahead of Fant, before the draft, but ultimately it’s reasonable that these two are going to be narratively connected for as long as their careers last. Hockenson comes in first among tight ends in our staff rankings, but not unanimously.

Henderson was one of the biggest fallers in the draft after landing with the Rams as a backup/handcuff/pass-catching alternative (depending on who you ask) to Todd Gurley. After being ranked fourth in Jeff Ratcliffe’s pre-draft rankings, Henderson was the fifth running back off the board, but only one running back went between David Montgomery at fifth overall and Henderson at 18th. If any concerns about Gurley’s health are founded, Henderson has among the highest ceilings in this rookie class, but if Gurley’s 100%, there’s a definite cap on Henderson’s potential as long as they are teammates.

Love is among the biggest wild cards in the draft. He had top-of-the-draft potential after his 2017 season, but returned to college for 2018 and saw his yards per carry drop from 8.1 to 4.5, and now he’s recovering from a torn ACL. Love’s rookie season might end up being a redshirt year, meaning drafting him is little more than a long-term investment with minimal potential for immediate dividends. There’s nothing wrong with that in a rookie dynasty draft, but it’s worth knowing that when the pick is made.

The first quarterback went off the board with the fourth pick in the first round. Haskins, the second, stuck around until the second pick of the third. That is a perfectly fine illustration of the gap between Murray and the field in this year’s rookie crop. Haskins has the potential to be a perfectly fine quarterback in the NFL, but he has a short track record and doesn’t run enough to have anything like the fantasy potential Murray carries.

Our first two UDFAs came off the board in the fourth round. Williams landed with the Chiefs after the draft, a good landing spot in a potent offense with only Damien Williams (who had minimal track record before exploding over the last month of 2018) and Carlos Hyde (who has been on three teams in the last year and hasn’t been impressive in longer than that) definitely ahead of him on the depth chart. James Williams is no guarantee to even make the roster, but if he can carve out a role, there’s plenty of ceiling with the Chiefs.

Hall, meanwhile, had nearly half of his targets and half of his yardage come on deep targets in 2018, averaging 20.5 yards per catch and putting up the third-best yards per route run of a Power 5 receiver in the PFF era. He might not have an immediate heavy role with the Bears, but he will have good potential (especially in best ball leagues) if he can make something for himself.

After Haskins at the top of the third, it took until late in the fourth round for any more quarterbacks to go (Will Grier, with the fourth-to-last pick, was the only other quarterback to go at all). Jones obviously went sixth overall in the real draft, but that was higher than most projections had him ranked, and there is already talk of him sitting behind Eli Manning for potentially multiple years before taking over the starting job with the Giants. Lock, meanwhile, has only Joe Flacco to contend with in Denver, meaning he could be the team’s starter as early as this season. Neither is a sure thing, but getting a starting quarterback at the end of the fourth round of a rookie draft carries value.

The joke is that Renfrow has been in college since the Taft administration, but the real point behind the joke is that he had 186 catches in his four years at Clemson and carries as much high-level experience as just about any receiver. He’s undersized (5-10, 184 pounds) and should be a slot option in the NFL, but joining a Raiders team that has plenty of outside receiver options but no obvious slot weapon before Renfrow, he has PPR potential right off the bat.

Higdon was the last pick in our mock and didn’t get drafted at all in the NFL draft … but he could be a weapon immediately in the NFL, thanks to landing on a shallow depth chart in Houston behind a disappointing Lamar Miller and a still-recovering-from-injury D’Onta Foreman. He was the No. 24 back in Jeff Ratcliffe’s pre-draft rankings and doesn’t do a lot as a receiver (he had 16 receptions in a four-year college career), but if Higdon can carve out a real role in the Houston offense in Year 1, he’s a steal this late in the draft.