According to Tom Pelissero of NFL Network, New Orleans Saints star wideout Michael Thomas is expected to miss several weeks with a high-ankle sprain. He was the first wide receiver off the draft board in the majority of drafts after breaking the all-time record for most receptions in the season after finishing top-five on the all-time season list the year before.

This is terrible news for Thomas, Saints fans and fantasy owners. While he is out, other players will need to step up in his place. These are the players who are expected to have their fantasy value benefit from Thomas' absence.

Who Will Take His Snaps

The Saints currently have five wide receivers on the roster, including Thomas and as well as do-it-all gadget player Taysom Hill. In Week 1, Tre’Quan Smith was on the field the second-most after Thomas, while veteran Emmanuel Sanders was third. Both Deonte Harris and Marquez Callaway both played six snaps apiece. Bennie Fowler was on the roster, went back to the practice squad, but it wouldn’t be surprising if he goes on the active roster when Thomas lands on the Injured Reserve. 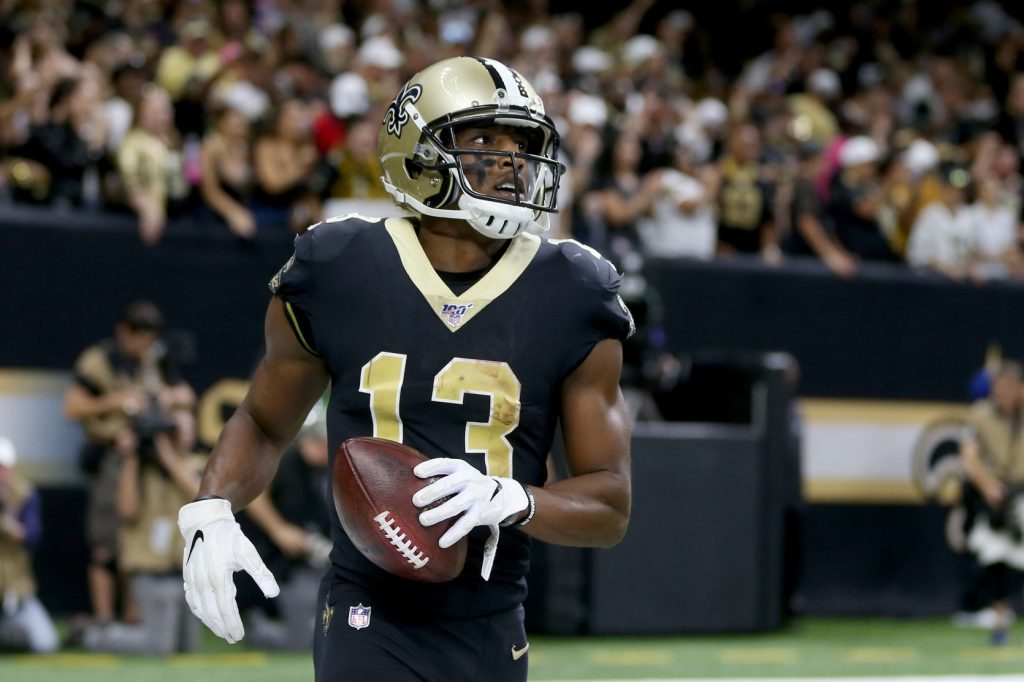 Thomas will need to be replaced in both the Saints' base offensive formations as well as 11 personnel. The Saints like having a lot of personnel packages often with different players and different skills on the field.

In the base offense, Thomas played 75% of the time, and no other receiver played more than a third of the time. This will continue to be a rotation of receivers. Smith could become the player to play in nearly all of these snaps with a rotation among the other players. They could also use these likely run plays as a chance to get the backups more playing time.

In 11 personnel, Thomas played every snap, and Smith played all but two. Sanders played 72% of the time. Smith can’t see more playing time here, while Sanders playing time will likely increase some.

If you count Hill as a wide receiver, he played the next most. The player who might benefit the most from this is Hill. If he is available as a tight end in your league, he could be worth a waiver wire pickup. He has the most potential of any of the players not currently on rosters. If he’s only available as a quarterback, he still won’t score enough points to be worth starting over other quarterbacks.

Harris has the next most snaps, but even if he starts playing significantly in 11 personnel, we’ve seen several number three receivers for the Saints not be fantasy relevant. While several teams have a clear slot receiver, New Orleans has used several players in the slot, including Thomas, who has thrived there. Both Smith and Sanders have also played significant snaps in the slot, so playing outside versus the slot won’t play much of a factor in who will see more time.

Who Will Take His Targets

While his snaps will be distributed among several players in several situations, his targets will mostly go to three players. In the past, while several players have seen significant playing time, Brees tends to throw most of his passes to a few targets. Brees may learn to trust Smith more than he has in past years, or Taysom Hill could be featured a lot more, but chances are the stars will just get larger target shares.

Those stars are Alvin Kamara, Jared Cook and Sanders. Kamara is someone that will be started in every league regardless but now fantasy owners will just be a little happier with him. For Cook, this is big news. Cook was a TE9 this past week and TE7 last year. More often than not he was someone worth starting depending on the matchup. This will push him closer to a top-five tight end while Thomas is out and someone to start regardless of his matchup.

Despite Sanders only running 23 pass routes, he was targeted five times. Smith was targeted five times just once all of last year. The only other players to see five targets in a game last year outside of Thomas, Kamara and Cook were Josh Hill once, Ted Ginn Jr.  (no longer on the roster) and Latavius Murray in the two weeks Kamara missed. The fact that Brees trusted Sanders enough to give him five targets in their first game is a good sign that he can be the target leader for the Saints wide receiver while Thomas is out.

Thomas is rostered in the majority of leagues, but in the ones he’s not, he becomes a must-add. For this week, he is a flex play, but he becomes a clear fantasy starter if he has a strong week.