Metrics That Matter: The most successful QB/receiver combos

FOXBORO, MA - OCTOBER 25: Tom Brady #12 and Rob Gronkowski #87 of the New England Patriots react after Gronkowski scored a touchdown during the fourth quarter against the New York Jets at Gillette Stadium on October 25, 2015 in Foxboro, Massachusetts. (Photo by Jim Rogash/Getty Images)

How important is the chemistry between a quarterback and his receiver?

Quarterback-to-receiver chemistry is something we all take as fact, a given variable that plays a role in fantasy football, but one where it’s hard to pinpoint what it is or what its actual quantifiable impact might be.

Last season, in his first year in Tampa Bay, DeSean Jackson ranked 62nd in yards per target (7.4). Over the prior four seasons, Jackson averaged a league-leading 10.9 yards per target. He also fell from 13.7 fantasy points per game to 9.9. What went wrong? Perhaps it’s just that Jackson turned 31 and was nine years removed from the 4.35-second 40-yard-dash he ran at the combine in 2008. However, if you ask head coach Dirk Koetter, Jackson was still frequently getting open – the issue was poor chemistry.

One method of quantifying chemistry is by looking at how efficient a quarterback was when targeting a particular receiver. In this space, we’ve already looked at wide receivers by WR rating (passer rating when targeted) and adjusted-WR rating (WR rating after adjusting for general quarterback efficiency). If you’re a PFF Elite subscriber, you can access our WR rating data here.

Today, I thought it’d be fun to look at the most efficient quarterback-to-receiver connections this past decade. After looking at the top-10 list – to my surprise – I came away with a number of important observations that might have an impact on the 2018 fantasy football season. 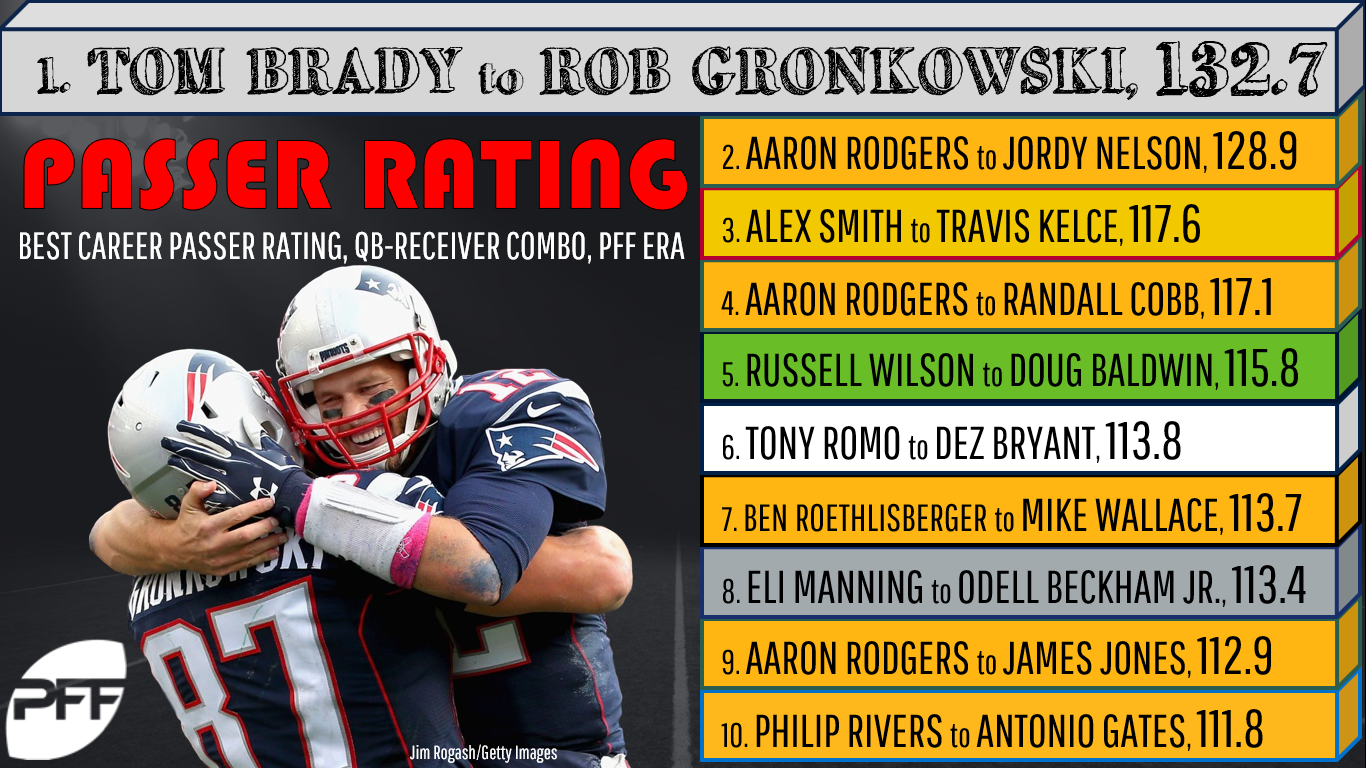 The Brady-to-Gronkowski connection ranks as the most efficient by any duo this past decade, and by a significant margin. Since 2008, Brady averages a passer rating of 132.7 when targeting Gronkowski, but only 102.9 when targeting all other players. To note just how impressive a 132.7 passer rating is (and on such a robust sample), the single-season record for passer rating is only 122.5, set by Aaron Rodgers in 2011. Although Gronkowski is fairly injury-prone (he hasn't played a full season since 2011) and his prowess as a pass-blocker limits the number of routes he runs, he’ll continue to get fed high target totals in 2018 due to his elite levels of efficiency.

The best quarterback-to-wide receiver connection of the past decade, and again by a significant margin, is Rodgers to Nelson. Nelson certainly deserves credit for his efficiency numbers here, but it is also quite telling Rodgers makes this list three times, while no other quarterback appears more than once. Clearly, given these numbers, it makes sense why Rodgers was upset with Green Bay’s decision to release Nelson without consulting him.

Nelson’s ranking here has me curious what this might mean in 2018. Nelson is coming off of the least efficient season of his career, and will now be catching passes from an entirely new quarterback. On 125 career targets, Nelson averages only a 71.1 passer rating when targeted from all non-Rodgers quarterbacks. Although these were all backup-caliber passers, obviously, I’m tempering expectation for Nelson this year (as I would with any receiver losing Rodgers as their passer). However, he could still prove to be a fantasy value racking up touchdowns in the Michael Crabtree role (fifth-most receiving touchdowns over the last three seasons).

Although Rodgers has been hyper-efficient with a number of different receivers, the loss of Nelson could hurt his numbers and the numbers of all surrounding pass-catchers – like it did in 2015. When Nelson missed all of the 2015 season, Rodgers finished 11th among quarterbacks in fantasy points per game, after finishing first the following season and top-four in each of the previous seven seasons. It was also his lowest single-season passer rating (92.7) since becoming a starter. Even his surrounding receivers took a hit. For the first time in his career, Rodgers didn’t have a single wide receiver ranking top-25 in fantasy points or fantasy points per game. I’m not too concerned, however. Davante Adams is now a much better player (our 12th-highest-graded wide receiver in 2017) than he was in his rookie season (our second-worst-graded wide receiver).

Jimmy Graham should also help replace Nelson’s absence in the red zone. Graham ranked second in receiving touchdowns last year. Although tight ends haven’t been too productive (for fantasy) in Green Bay, with only two top-10 positional finishes over the past 11 seasons, Rodgers has been highly efficient when targeting the position. Rodgers averages a 111.9 passer rating when targeting tight ends over the past 10 seasons, which isn't too far off from his 112.3 rating when targeting wide receivers.

Third on our list is the Smith-to-Kelce connection. Again, we have another instance of a team deciding to break up a historic efficiency connection. What does this mean for Kelce, now catching passes from a quarterback who has only ever played in one NFL game? What does this mean for Smith, now in Washington, and his new tight end, Jordan Reed? Smith's most efficient target, since 2008, has actually been tight end Vernon Davis, recording a 126.0 passer rating on 264 career attempts (which didn’t meet our threshold). Smith also leads all 42 qualifying quarterbacks in percentage of targets aimed at tight ends over this stretch (27.6 percent). Reed was also Kirk Cousins’ most efficient target (119.7) while in Washington. Perhaps Smith's arrival means slightly improved efficiency or volume for Reed, or at least no drop off – if he stays healthy. Perhaps also Kelce takes a slight decline with a less tight end-friendly and more inexperienced quarterback (and more competition for targets with Sammy Watkins now in the picture), though I’m not too concerned.

It’s interesting to note Cobb’s ranking here, and he’s quietly been one of my favorite targets in 2018 drafts (WR42 by ADP). Cobb was quietly very efficient last year, averaged 12.7 fantasy points per game before Rodgers' injury, and was one of my top injury-related values heading into last season.

Bryant was one of the most efficient wide receivers in the league, when Romo was throwing him the ball, but took a major step back with Dak Prescott under center. Prescott earned an 88.0 passer rating when targeting Bryant over the past two seasons but had a passer rating of 107.3 when targeting any other player. Earlier this offseason, PFF analyst Aaron Bloch argued Bryant still has a lot left in the tank and wasn’t seeing the same percentage of catchable targets as he was under Romo, which played a role in his efficiency decline. Other analysts have echoed similar sentiments – Bryant’s skillset just doesn’t match up well with Prescott’s strengths as a passer. I’m a little more pessimistic, but perhaps a change of scenery is all he needs to revive his career.

Over the past decade, Manning averages a 113.4 passer rating when targeting Beckham, but only 89.7 when targeting all other receivers. For perspective, a 113.4 passer rating would have led the league last season, while a passer rating of 89.7 would have ranked 17th, just ahead of Tyrod Taylor (89.2). Beckham deserves all of the praise that frequently gets heaped upon him. Not only is he always the top focal point of each defense to face him and Manning’s favorite-target (with little support surrounding him throughout his career), but even in spite of this, he’s still one of the most efficient receivers in the NFL. Manning and the entirety of the offense should take a massive step forward next season if Beckham stays healthy.