ARLINGTON, TX - NOVEMBER 24: Jordan Reed #86 of the Washington Redskins celebrates after catching a touchdown pass during the fourth quarter against the Dallas Cowboys at AT&amp;T Stadium on November 24, 2016 in Arlington, Texas. (Photo by Tom Pennington/Getty Images)

One of the common weaknesses of fantasy football players is overdrafting those high-upside/injury-prone players. It’s easy to see the high ceiling and say “This is the year he’ll stay healthy!”

I’m guilty as well. On draft day in 2016, for instance, I was sitting at my computer salivating over Arian Foster’s ADP. He averaged 19.8 fantasy points per game in 2015 and 21.0 fantasy points per game in 2014. That year he had an ADP in the fifth round. The only non-quarterbacks to average more fantasy points per game over the prior two seasons were being drafted in the first round. Never mind that he was coming off an injury and had missed 48 percent of his games since 2013, I was too busy drooling over his upside to think of the risks. That year it hurt me, just like it had in other seasons with other players like Ahmad Bradshaw, Julian Edelman, and Percy Harvin.

In 2018, I can say I’ve learned my lesson the hard way(at least I think I have), and yet here I am still, looking at Jordan Reed’s ADP and drooling yet again. 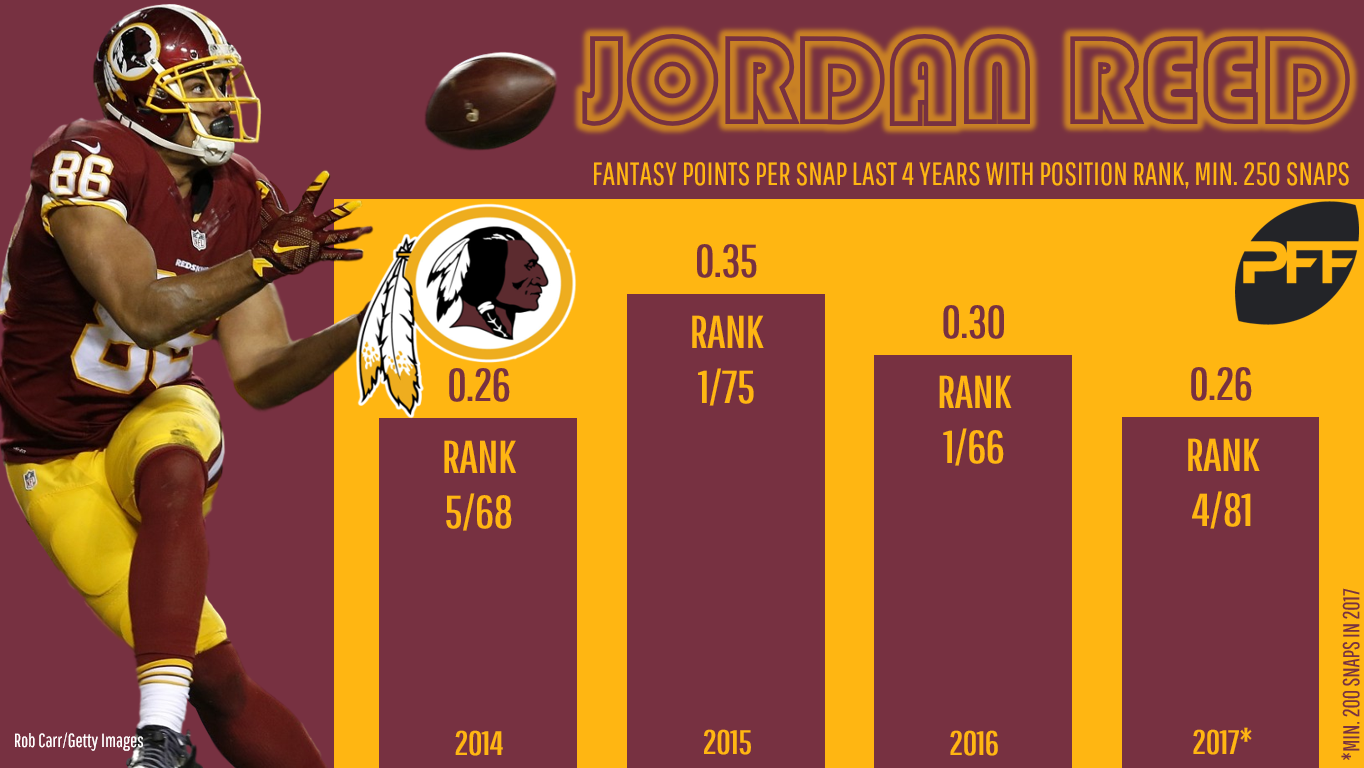 Over the past four seasons, Reed has played in only 67 percent of his team’s games (43 of 64). He’s also spent another 11 games active but on the injury report. So, in 50 percent of his team’s games, he was either inactive or on the injury report. This is his downside and the risk in drafting him, but it actually might be a little scarier than that.

In April, after announcing Reed will miss all of the team’s OTAs, head coach Jay Gruden said of Reed, “[He had a] procedure done on his toes … hopefully we'll see a 100-percent healthy Jordan by training camp.” This toe injury plagued Reed throughout the entirety of the 2017 season and sapped him of his typical athleticism and efficiency, leading to a career-low PFF grade. It’s alarming to hear this injury has not yet been resolved, and also the vagueness of “procedure” and the word choice of “hopefully” doesn’t really inspire much confidence either. Though, Redskins beat reporter J.P. Finlay did say on his podcast, he recently saw Reed at the facility walking fine without a brace or crutches.

There is also a quarterback change in Washington, which would normally raise concerns regarding chemistry and volume, but I’m actually more optimistic in this instance. Since 2011, Alex Smith leads all quarterbacks (of 31 qualifying) in percentage of pass attempts aimed at tight ends (26.9 percent).

This raises the question then, when weighing the risk and upside, is Reed a value in 2018 drafts? He’s currently being selected in the ninth round of drafts and as the No. 10 overall tight end. Over the past five seasons, tight ends selected ninth through 11th at the position average 139.3 fantasy points per season, a number Reed should hit in 9.1 active games or 7.9 games with at least 30 snaps, using our numbers from the past three seasons. He’s averaged 10.7 games or 8.7 games of at least 30 snaps over the past three seasons. While he could miss more games than this or even the full season, he also offers an unparalleled positional edge (Gronkowski excluded) on your opponents when he is on the field.

As it stands, Reed is a favorite target of mine in fantasy drafts, despite the injury risk I’ve grown to be more cautious of.

One final note: Rarely would I recommend handcuffing a non-running back, but I think a last-round pick of Vernon Davis for added security might be worth it in this case. Over the past two seasons, Davis averages 9.1 fantasy points per game over the 14 games Reed was inactive. This would have ranked 12th at the position last season. New quarterback Smith comes to Washington with an already-established chemistry with Davis, targeting him 298 times during their time together in San Francisco. Although Davis is 34 years old, his numbers in Washington suggest he hasn’t slowed down much at all. Among all tight ends with at least 100 targets over the past three seasons, Davis ranks first in missed tackles forced per reception and third in yards after the catch per reception.