SEATTLE, WA - JANUARY 18: Quarterback Aaron Rodgers #12 of the Green Bay Packers in action during the 2015 NFC Championship game against the Seattle Seahawks at CenturyLink Field on January 18, 2015 in Seattle, Washington. The Seahawks defeated the Packers 28-22 in overtime. (Photo by Christian Petersen/Getty Images)

I’m asked often about my process for these articles, and I’ve talked about it briefly before, but here’s how I typically come up with an idea for this series:

It starts with an observation. Today, it was this stat I uncovered:

Since 2014, Green Bay Packers QB Aaron Rodgers has thrown 114 passes against the Seattle Seahawks. Only four of these passes were thrown to receivers covered by Richard Sherman.

And then a hypothesis:

And then we test this to see if our findings support our theory. In this case it does:

Top-25-graded cornerbacks lined up against Rodgers 370 times last season. He targeted them only 44 times. This was the lowest rate (11.9 percent) among all 28 quarterbacks to attempt at least 350 passes last season.

Now, this is only on a one-season sample, so I wanted to test this even further to see if this has remained constant throughout Rodgers’ career. It appears it has:

Over the past decade, only 403 of Rodgers’ 2,892 wide receiver targets were aimed at a wide receiver in coverage against a top-25-graded cornerback. That equates to 13.9 percent, or the lowest rate in the league over this stretch. 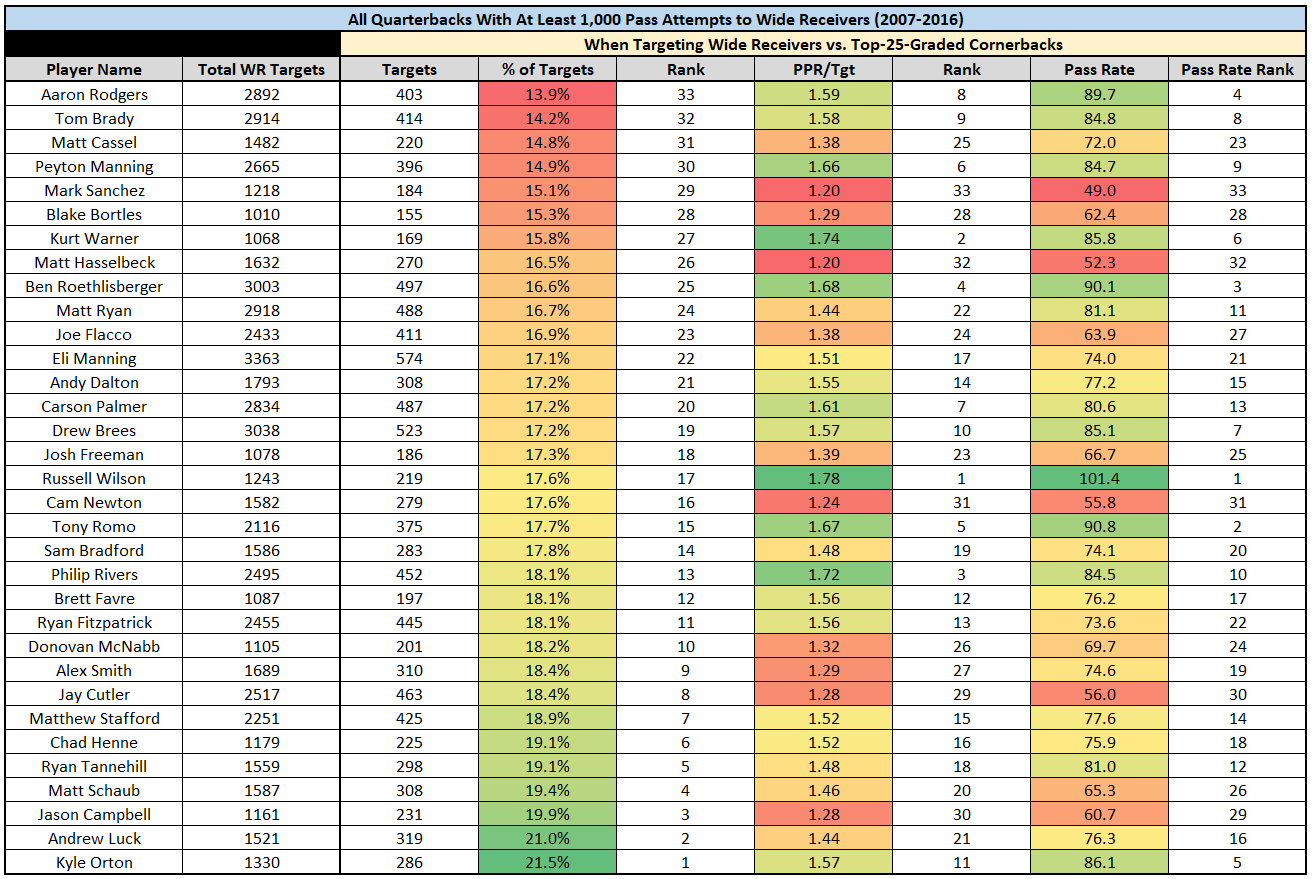 By no stretch is this me knocking Rodgers as a coward, or anything along those lines. Rather, I think this is a very wise and calculated decision on his part. With Tom Brady and Peyton Manning also ranking in the top-four, there might be some sort of correlation of top quarterbacks paying special attention to opposing cornerback coverage. Perhaps even a player like Andrew Luck could stand to improve his efficiency numbers if he were more hesitant to target elite cornerbacks.

Over the past decade, quarterbacks average a passer rating of 71.2 when targeting top-25-graded cornerbacks, as opposed to 94.2 when targeting all other cornerbacks. Given this data, it makes sense to exploit the weaker matchups, especially in a case like with Seattle, where Sherman typically just sticks to his side of the field.

Since 2014, in two games against Seattle, Jarrett Boykin ran 82 percent of his routes from right wide receiver (Sherman's side of the field.) He was never targeted in either of these two games. Davante Adams ran 53 percent of his routes from the right, with Jordy Nelson at 16 percent and Randall Cobb at two percent. Over this stretch, against Seattle, Nelson averaged 17.2 fantasy points per game, with Cobb averaging 15.7, and Adams averaging 10.1.

Specifically, against Seattle this season (Week 1), Nelson and Cobb appear the safer bets for fantasy, while Adams gets neglected running routes against Sherman.

This won’t be a perfect strategy, considering Green Bay also does a good job of moving their receivers around the line of scrimmage (for Nelson, that likely means more time in the slot) to create favorable matchups, but it will be a general rule I try to follow to give myself an edge in DFS. I’ll also be more skeptical of playing a New England wide receiver in a tough matchup, given Brady’s ranking. Conversely, I’m less concerned with playing someone like T.Y. Hilton in a tough matchup, considering Luck’s ranking here.