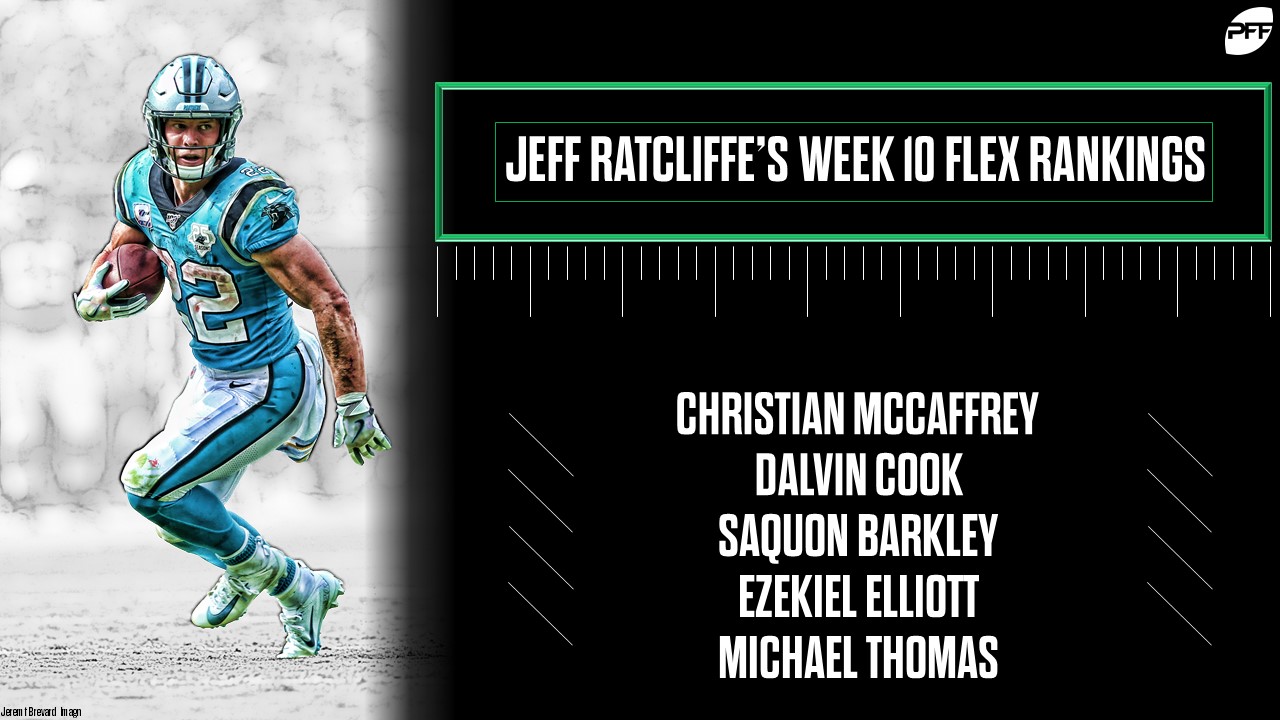 1. Christian McCaffrey, CAR @ GB (RB1) — McCaffrey is on a historic pace for fantasy purposes with the third-most fantasy points over the first eight games of any running back.

3. Saquon Barkley, NYG @ NYJ (RB3) — Last week wasn't optimal, but Barkley is poised to bounce back in a favorable matchup.

4. Ezekiel Elliott, DAL vs MIN (RB4) — Elliott has hit his stride and looked fantastic against the Giants last week.

6. Alvin Kamara, NO vs ATL (RB5) — The bye week should have done a body good for Kamara. Expect him to return this week.

7. Aaron Jones, GB vs CAR (RB6) — Don't get too bogged down by last week's poor gamescript. Jones still has a high-end RB1 ceiling.

8. Chris Godwin, TB vs ARI (WR2) — Godwin draws a fantastic matchup this week and should get back to elite fantasy territory.

9. Mike Evans, TB vs ARI (WR3) — Despite a potential shadow from Patrick Peterson, Evans is on fire.

10. Nick Chubb, CLE vs BUF (RB7) — Kareem Hunt returns this week, but that doesn't mean you should downgrade Chubb.

12. Josh Jacobs, OAK vs LAC (RB9) — Oakland continues to lean heavily on Jacobs, and so should we.

14. Julio Jones, ATL @ NO (WR4) — Jones doesn't have the best draw this week, but we can expect a heavy workload with Mohamed Sanu out of the mix.

16. Tyreek Hill, KC @ TEN (WR5) — Patrick Mahomes should be back this week, but it really doesn't matter who throws Hill the ball.

18. Amari Cooper, DAL vs MIN (WR7) — The Viking secondary isn't anywhere near as intimidating of a matchup as it once was.

20. Tyler Lockett, SEA @ SF (WR9) — He's coming off a massive Week 9 performance, but does have a tough matchup against the 49ers.

21. Mark Ingram, BAL @ CIN (RB12) — This is a fantastic matchup for Ingram, but his lack of volume puts a cap on his upside.

22. Chris Carson, SEA @ SF (RB13) — Carson continues to be fed, but he's just on the outside of RB1 territory in this tough matchup.

23. Melvin Gordon, LAC @ OAK (RB14) — Gordon finally showed some signs of life last week and should be fired up as an RB2 play.

24. Tevin Coleman, SF vs SEA (RB15) — Matt Breida posted the better fantasy numbers last week, but Coleman is still the preferred options because of his role in the red zone.

27. George Kittle, SF vs SEA (TE1) — Tight end is no fun this season, but Kittle is one of the rare players at the position who continues to produce good fantasy numbers.

28. Hunter Henry, LAC @ OAK (TE2) — Henry is starting to heat up and now ranks 10th among tight ends in fantasy scoring despite only playing four games.

30. Jaylen Samuels, PIT vs LAR (RB17) — James Conner will likely be sidelined again this week, which means another full workload for Samuels in the passing game.

38. Emmanuel Sanders, SF vs SEA (WR14) — Sanders was a monster last week and is trending up into front-end WR2 territory.

47. Ronald Jones II, TB vs ARI (RB23) — Jones looks to have assumed lead duties in Tampa Bay, but it's still tough to trust him as anything more than a back-end RB2.

56. Joe Mixon, CIN vs BAL (RB25) — Ryan Finley under center puts a damper on the fantasy outlook of the entire Cincinnati offense.

69. Kenyan Drake, ARI @ TB (RB29) — The Arizona backfield remains very fluid, but Drake is looking like more of a flex option with the possibility that David Johnson returns this week.

77. Kalen Ballage, MIA @ IND (RB31) — Ballage is now the lead back in Miami, but his lackluster play makes him a flex option at best.

87. Trey Edmunds, PIT vs LAR (RB34) — Edmunds surprisingly led the Steelers on the ground last week, but he still takes a back seat to Jaylen Samuels for fantasy purposes.

114. Josh Reynolds, LAR @ PIT (WR59) — With Brandin Cooks in the concussion protocol, Reynolds will get plenty of reps for the Rams.