The Houston Texans were part of the biggest blockbuster trade of the year so far when they sent DeAndre Hopkins to the Arizona Cardinals in exchange for David Johnson. There were draft picks involved also, but the players are the big story for fantasy purposes. With their franchise wideout out of the mix, there’s an obvious ripple effect here. So let’s break down what our initial 2020 fantasy football projections have to say about the Texans. 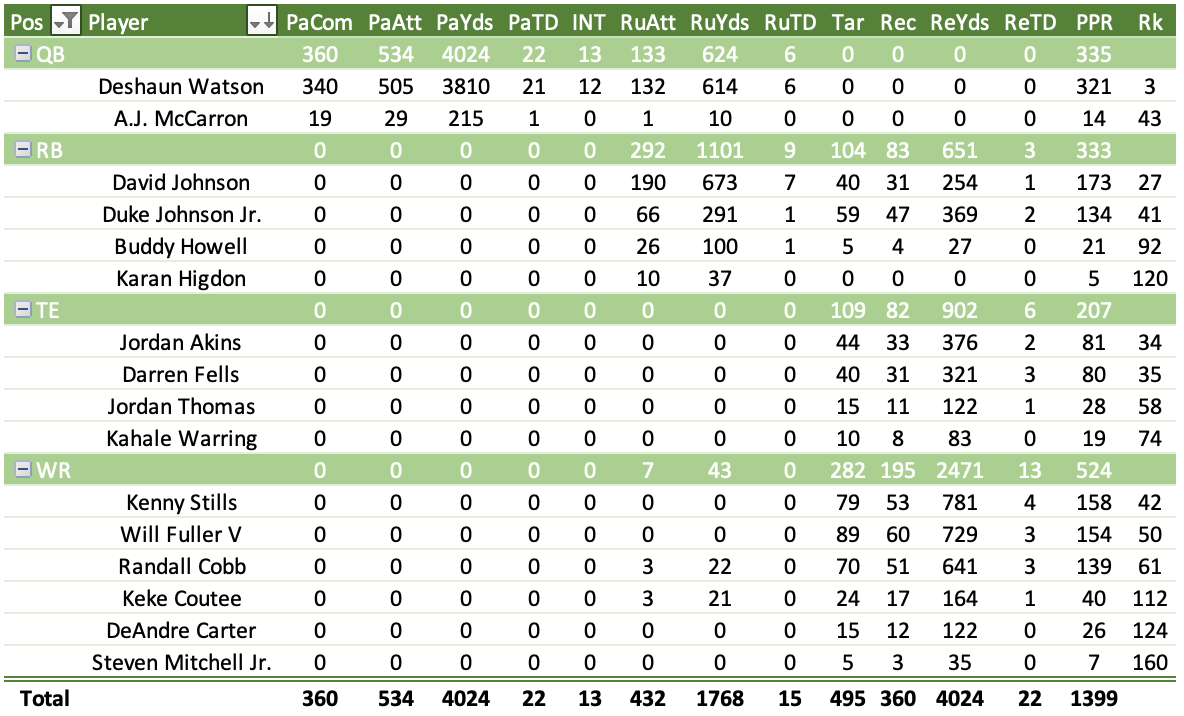 Following an extremely disappointing 2019 season, David Johnson is in a good position to rebound with the Texans. He has very little competition for touches in the run game, but unfortunately the presence of Duke Johnson caps his upside in the passing game. As our numbers show, the impact here drops David Johnson into fringe RB2 territory. Of course, it’s still early in the evaluation process for 2020, but David Johnson’s outlook isn’t particularly appealing despite his opportunity to be the lead back in Houston.

One of the initial thoughts following the Hopkins/Johnson trade was that Deshaun Watson would end up being a fantasy loser. However, our projections have Watson coming in nearly just as strong as he would have with Hopkins still on the team. Watson’s rushing ability certainly helps the cause, but it’s also about the sheer volume of weapons he has at his disposal. Our initial numbers have Watson spreading the ball around and feeding at least 40 targets to seven different players.

At wideout, we’d love to say Hopkins' departure opens the door for Will Fuller to cement himself as a top-15 option. But as you can see from the numbers, that just isn’t the case. In a perfect world, Fuller would stay healthy for all 16 games, but he simply hasn’t shown the ability to do so in his pro career. His injury-prone ways are baked into these numbers. In fact, none of the Texans’ top three wideouts — Fuller, Kenny Stills or Randall Cobb — crack the top 40 fantasy wide receivers.

Now, that’s not to say that Fuller can’t outplay these numbers. In fact, I believe he will. Fuller ranks as the No. 28 receiver in our 2020 fantasy football rankings. And that difference between his ranking and his projection is the product of a belief that he’ll be closer to his ceiling than to his floor. Of course, in drafting Fuller as a WR3-type this year, you’re taking on a lot of risk. But with that risk comes the reward that he drastically outplays his ADP.

As for the tight ends, Watson has shown an affinity for throwing to the position. But the problem for fantasy purposes is the amount of 12-personnel the team deploys. Last season, Houston ran with two tight ends on 23.4% of its offensive plays. This high usage of 12-personnel led to weekly fantasy volatility at the position. Some weeks Darren Fells was the guy, and other weeks it was Jordan Akens. Without a rhyme or reason to predict which player has the big game, it’s wise to avoid the Texans' tight ends outside of DFS contests.