Who are the best fantasy football plays for building an optimal DFS lineup in Week 6 of the 2018 NFL season? As we do every Saturday, this piece brings you the DFS locks of the week. 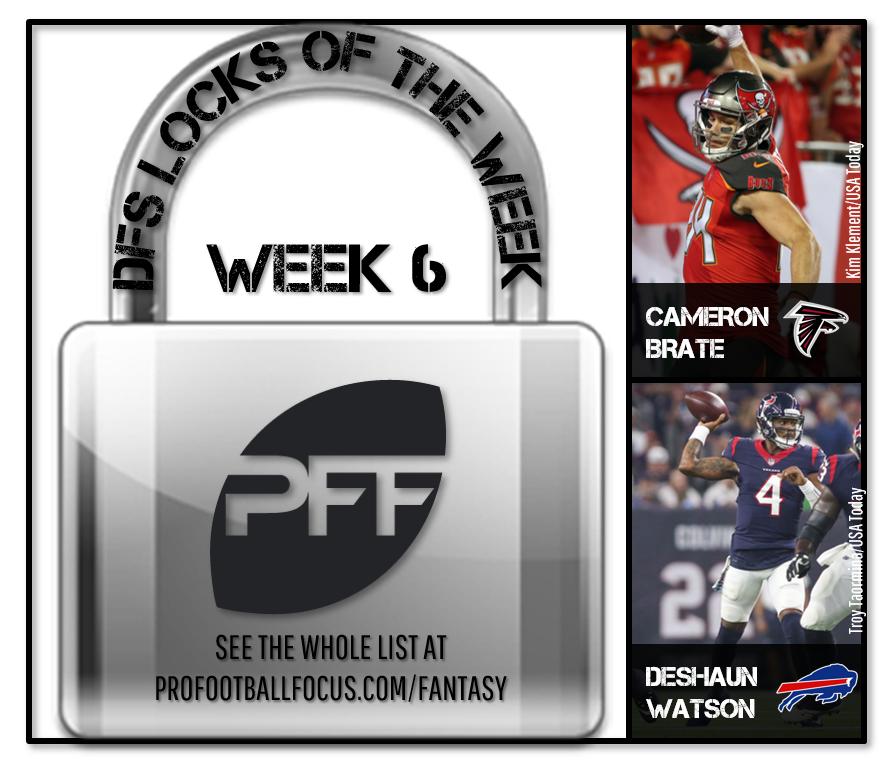 At first, I thought Winston might fly under the radar in his first start, but he’s clearly going to be the chalk at quarterback this week, and for good reason. He wasn’t priced the way he should have been, and he travels to a domed environment to take on the Falcons, who have given up the fourth-most fantasy points to opposing quarterbacks this year. The Buccaneers have an implied team total of 27 points and virtually no run game. A three-touchdown, 300-plus yard game is in the cards.

Watson continues to have one of the best floors in fantasy, and he hasn’t even touched his ceiling yet. He has at least 25 DraftKings points in four straight games and rolls into Week 6 as a 10-point home favorite against the Bills. We love targeting home favorite quarterbacks in DFS; we especially love it when they provide the floor/ceiling combination that Watson brings to the table.

Dalton is another home favorite quarterback (2.5-point favorites against the Steelers) in a game with a high over/under (52.5, second-highest of the main slate). The Steelers have given up the second-most fantasy points to opposing quarterbacks so far this year, including a blistering average of 351 passing yards surrendered over their previous four contests.

Gurley is mega-pricey, and it’s not easy to fit him into lineups, but he’s a total workhorse, averaging 23.4 touches per game with at least one touchdown in every game this year. The Rams are 7-point favorites against a Broncos defense that has given up over 125 rushing yards to opposing backfields in each of their last two games (including 318 last week) and at least one rushing touchdown against in four straight. Gurley is the surest bet at the running back position every week.

As of this writing, we project Mixon to be the second-highest-scoring running back (behind Gurley) on both DraftKings and FanDuel this weekend. In his return to the field last week, Mixon handled 78% of the snaps and 92% of the running back carries. He’s a lock for 20-25 touches and has a good chance to score in this should-be high-scoring affair versus the Steelers (52.5 over/under). 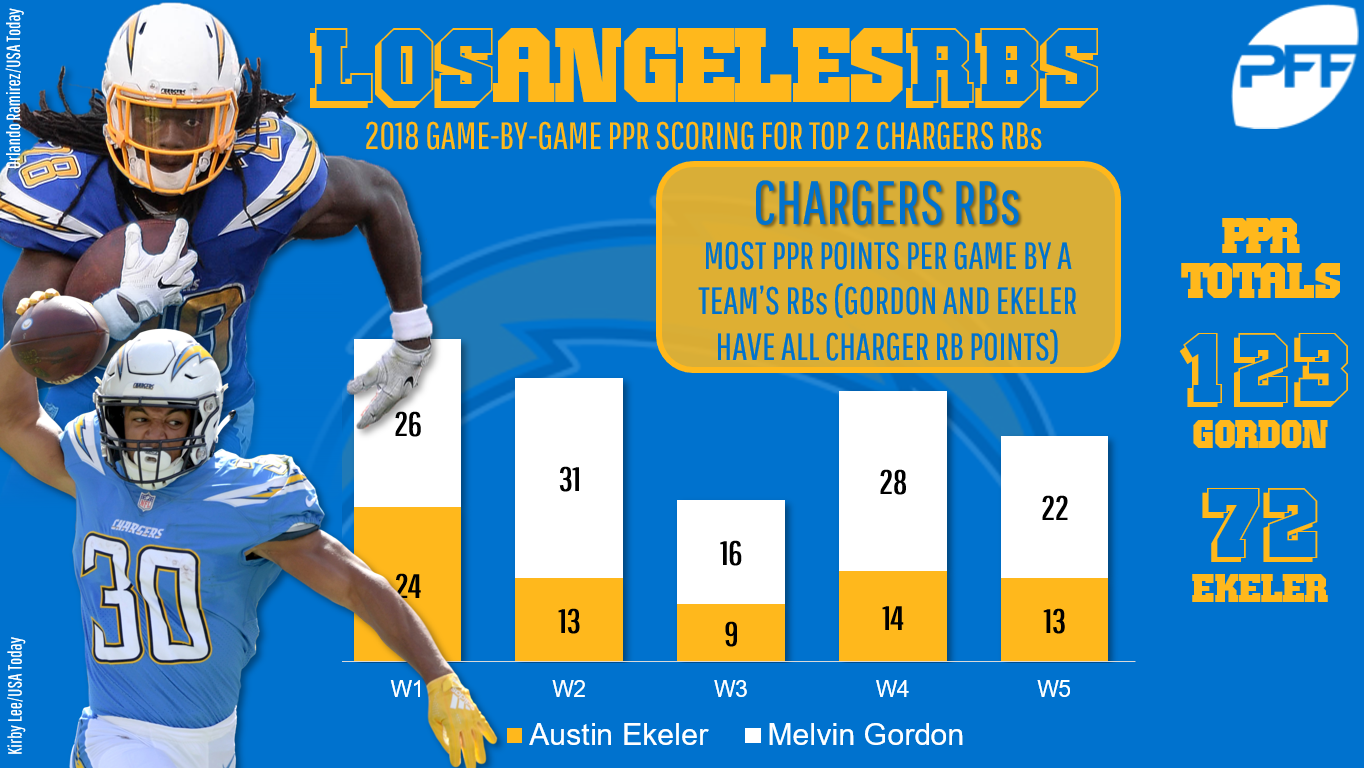 Gordon is averaging just over 20 touches per game, including a highly valuable 28 receptions (fifth-most among running backs). His Week 6 opponent, the Browns, are giving up an average of 107 rushing yards against per game — fifth-most in the NFL.

Carson is simply too cheap across the DFS sites given his expected volume. We projected Carson for a healthy 17 touches, but he has averaged 27 over his last two contests with over 100 rushing yards in both games. At only $6,400 on FanDuel and $4,400 on DraftKings, that kind of volume is hard to find. The Raiders are giving up over 5.0 YPC against while surrendering 110 rushing yards per game, fourth-most in the NFL.

Jones has the best individual WR/CB matchup of the week against a Buccaneers secondary that has given up the second-most fantasy points to wideouts so far this season. Jones is due for a touchdown: Of the 30 players who have seen at least three end-zone targets this year, Jones is just one of five who haven’t scored yet.

Evans’ four end-zone targets are tied for ninth in the NFL — and he’s already had his bye week. We’ve already mentioned that the Bucs have an implied team total of 27 points, and Evans should contribute to that with the seventh-best individual WR/CB matchup of the week.

Green has been dealing this year, with at least eight targets and at least 55 yards in every game to go along with five touchdowns through five contests. He draws a Steelers defense that has given up the fourth-most fantasy points to opposing receivers this year, including 1,081 yards given up to the position — second-most in the NFL.

Since entering the lineup in Week 4, Coutee has averaged 10 targets, 8.5 receptions, 80 yards, and 0.5 touchdowns per game. Over those two games, he has an impressive 25.3% team target market share with an extremely low average depth of target of 3.8 yards, giving him easy catches and plenty of run after catch opportunity. The Bills have been relatively soft on slot receivers this year, notably ceding 14-105-0 (19) to Adam Thielen, 6-67-0 (6) to Keenan Allen, and 4-49-1 (6) to Willie Snead. Coutee is extremely cheap ($5,700 on FanDuel and $4,600 on DraftKings) and is a good bet to return value at that price.

With Zach Ertz, Rob Gronkowski, and Travis Kelce not on this week’s main slate, Ebron sits atop the tight end heap. That’s where he belongs. Ebron ranks third in the NFL with seven end-zone targets (the next-closest tight end has only three), and he has seen double-digit targets in three straight games. With Hilton doubtful for Week 6, we can expect another high-volume, high-value game from Ebron, who still isn’t priced high enough given his current role.

O.J. Howard is looking like a game-time decision, so check his status before locking your lineup, but if he sits, Brate becomes the chalk. He’s min-priced on FanDuel and an affordable $3,700 on DraftKings playing in a high-scoring game (57.5 over/under) with Winston back under center, and we know Winston likes to look Brate’s way in the red-zone. Brate had 14 touches over the last two seasons, and he has a touchdown in back-to-back games leading into Week 6.

Hooper smashed last week, catching nine of 11 targets for 77 yards (no touchdowns). He won’t see double-digit targets often — he had 15 combined targets Weeks 1-4 — but it’s nice to know that Hooper, who has always been more of a touchdown-or-bust kind of option, has those ceiling games in him. He could unlock that ceiling against the Buccaneers, who have given up the most fantasy points to opposing tight ends this year. Tight ends are averaging over 100 yards per game against the Bucs.