Who are the best fantasy football plays for building an optimal DFS lineup in Week 11 of the 2018 NFL season? As we do every Saturday, this piece brings you the DFS locks of the week.

In four home games this year, Brees is completing 80% of his passes while averaging 347 passing yards and three touchdowns per game — with no interceptions. And this week he gets an Eagles defense that ranks bottom-10 in fantasy points given up to quarterbacks as an 8.5-point home favorite in a game with a total over/under of 56. He’s not going to fail.

Wentz is averaging 23 DraftKings points per game this season, which is good for a 3.65x return on value from his $6,300 salary. He’s an even better value on FanDuel, where he’s just $7,700 this week. This Eagles/Saints game has a high chance of ending in a shootout with Wentz going to work against a Saints defense that has given up the most fantasy points to quarterbacks this year.

Gordon leads a long list of elite running backs that are great options in DFS this week. His Chargers are 7-point home favorites against a Broncos defense that has given up 4.9 YPC to running backs on the year.

McCaffrey draws a Lions defense that has ceded the fourth-most rushing yards to running backs (1,115) with over 100 rushing yards allowed in six of nine games. Detroit has also allowed a running back to score on them in four straight games.

DJ is back, and he’ll keep rolling in Week 11 against a Raiders defense that has given up over 110 rushing yards to opposing backfields in seven of nine games. The Raiders have given up the second-most rushing yards to running backs overall (1,156).

Elliott gets one of the best running back matchups in the league against the Falcons, who have given up the second-most fantasy points to the position on the year. Running backs are averaging over 4.8 YPC against Atlanta and have collected a league-high 76 receptions against their defense. Elliott has been a regular contributor through the air this season with 44 targets (nearly five per game).

Barkley should destroy a Buccaneers defense that has given up the third-most fantasy points per touch to opposing running backs on the year, including over 130 total yards and over 1.5 touchdowns per game to the position. Barkley ranks first among running backs with 8.1 targets per game.

OBJ versus a Buccaneers defense that has given up the second-most fantasy points to opposing receivers, including the second-most touchdowns allowed to the position (15) is a matchup you can’t ignore. A receiver has scored at least once against the Bucs in every game this year. 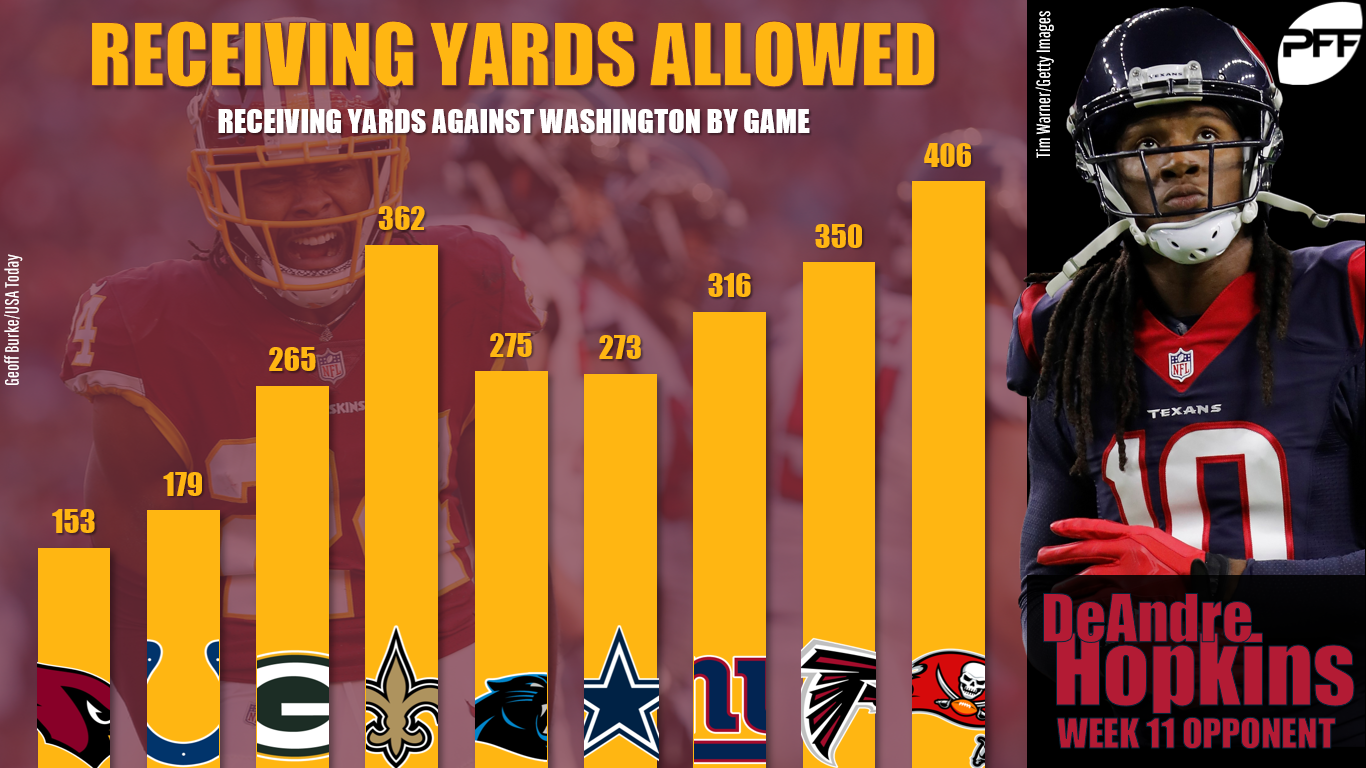 Hopkins gets a Redskins defense that has given up over 200 receiving yards to opposing wideouts (as a whole) in five of their last six games. No other team is on as bad of a stretch. For reference, the Bills and Jaguars — two of the best pass defenses in the NFL — haven’t allowed opposing receiving corps to top 200 yards on them all season.

With Golden Tate no longer in town and Marvin Jones ruled out for Week 11, Golladay is going to be force-fed targets, and you’d be foolish not to play him in this situation at this price point. With no Tate last week and a banged-up Jones, Golladay absorbed 30% of the team’s targets (12 looks). I’m considering double-digit targets a lock.

Ertz doesn’t have the best paper matchup (New Orleans has given up the second-fewest fantasy point per target to tight ends), but I think we can consider Ertz matchup-proof at this point thanks to his volume. His 98 targets are tied for third in the entire NFL … with Julio Jones and Odell Beckham. It helps, too, that this Week 11 matchup against the Saints has a DFS-friendly over/under of 56.

Seals-Jones is incredibly cheap ($2,900 DK; $5,200 FD) and he’s coming off a season-high nine-target game against the Chiefs. Seals-Jones ranks second on the Cardinals in targets (13) since the team fired offensive coordinator Mike McCoy, and he this week faces an Oakland defense that has given up the most fantasy points per target to opposing tight ends.