The Dallas Cowboys are turning a new page entering this season with Jason Garrett out and Mike McCarthy in at head coach. For fantasy purposes, this move really isn’t going to affect us that much, as the team retained Kellen Moore at offensive coordinator. Moore’s offense put up some major numbers last year with a league-high 431.5 yards per game. Let’s take a look at what our initial 2020 fantasy football projections have to say about Dallas. 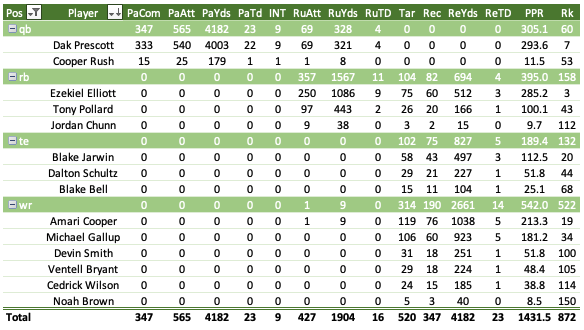 There’s one projection that sticks out like a sore thumb on this list, so let’s not beat around the bush. Amari Cooper comes in a disappointing 19th among wide receivers, which is 11 spots behind where he lands in our 2020 fantasy football rankings. That’s a sizable gap that’s worth unpacking. A big reason for the lackluster projection comes down to target shares. It’s rare for a team two have two wide receivers with over a 20% target share, but we have just that projected for Cooper and Michael Gallup. That cannibalization of looks certainly pulls Cooper’s numbers downward.

Cooper is also projected for just five touchdowns. While that number may seem low, it’s important to keep in mind that he really hasn’t ever been a touchdown machine. His career-high is eight scores, which came last season. So his historic numbers simply don’t paint the most favorable picture. With all of this being said, Cooper’s ranking is a reflection of the high ceiling he’s displayed since coming over to the Cowboys. As for Gallup, his projection and positional ranking are much closer aligned.

Over the first three years of his career, Dak Prescott was a nearly prototypical high floor/low ceiling fantasy option. That all changed last year, as Prescott threw for 4,901 yards and 30 scores. Only Lamar Jackson had more fantasy points among quarterbacks for the season. Our numbers aren’t quite as bullish, but we do have Prescott squarely positioned in the top 10.

Likewise, there’s no surprise in Ezekiel Elliott’s projection. He’s widely considered the No. 3 fantasy back this year, and that’s exactly where his numbers come in. Tony Pollard may not have standalone value in the Dallas backfield, but the second-year man does offer some of the best handcuff potential on the board. Our numbers have him with a healthy 4.56 yards per carry.

With Jason Witten out of the mix again, Blake Jarwin is positioned to take over as the top pass-catching tight end in Dallas. While there is some chatter among the fantasy cognoscenti for Jarwin as a breakout candidate, our numbers suggest he’s more of a streamer option. That being said, he does project out seven spots higher than his current ADP of TE27.