Despite the title of this article, it’s never too early to dig into ADP trends for the coming season and leverage our fantasy rankings. There are months to go before we get into the thick of seasonal drafting and DFS analysis, but dynasty drafts and early offseason best ball leagues are already up and running.

In this analysis, I’m leveraging the individual draft data I’ve collected from FFPC best-ball leagues that started already this offseason (yes, there have been quite a few) and the hundreds played last year. The data reveal some significant trends and themes this season that, if identified early, could be the key to being ahead of the curve.

Travis Kelce in a new stratosphere

Kelce is the TE1 this season just like last year (and the year before that). But his ADP isn’t really comparable. In FFPC’s TE-premium PPR leagues, Kelce’s ADP is 3.4 versus 9.9 going into the 2020 season. On an absolute basis, it’s only a 6.5-slot move, but the draft capital of the early pick rises exponentially, meaning it’s a monster value gain.

Historical ADP data from normal PPR leagues show that Kelce is going at the highest level we’ve seen since before 2010.

The only other tight end to be drafted in the top 10 in prior years was Jimmy Graham in 2014. Graham wasn’t the league-winner many had hoped for that season, but with totals of 85 catches for 889 yards and 10 touchdowns, he was a solid TE2 to the leader Rob Gronkowski.

Kelce’s ascension is partially about how good he was last season with the best per-game PPR scoring at the position ever — but also how much he separated from the field.

The gap in points per game between Kelce and the TE2 (Darren Waller) was 3.3, with a huge gap down to TE5 (Robert Tonyan). The tight end position isn’t thin as much as it’s shallow, with few strong producers outside of the top few options.

Pivot from Kelce to Kittle

The dynamic of a top-heavy position probably won’t change this year, but there should be more competition at the top if George Kittle can stay healthy. Kittle’s ADP has also risen year-over-year, but not nearly to the degree that we saw with Kelce. 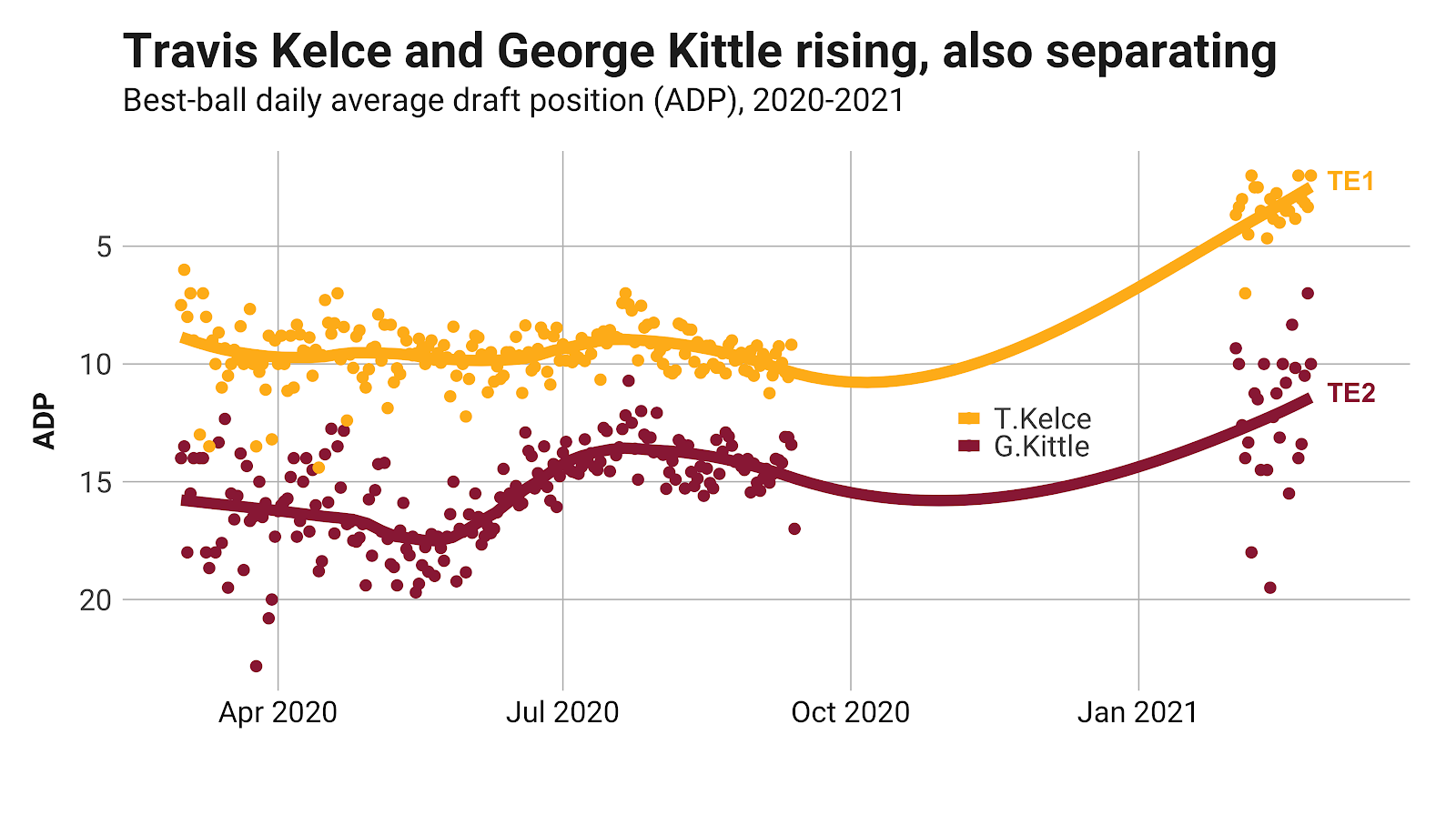 There was roughly a five-spot ADP difference between Kelce and Kittle last season, and now it’s widened out to almost 10. And the difference is more significant than that considering how valuable the top ends of drafts are.

Not only has Kittle become more of a value vis-a-vis Kelce, but his draft position has also shown more variance this year. The likelihood of getting Kittle at a value number is higher when he slips more often.

Go ahead and catch falling knives

Two of the biggest disappointments last season at the tight end position were Zach Ertz and Tyler Higbee. The former was a stalwart producer for years before seemingly falling off the age cliff in 2020. 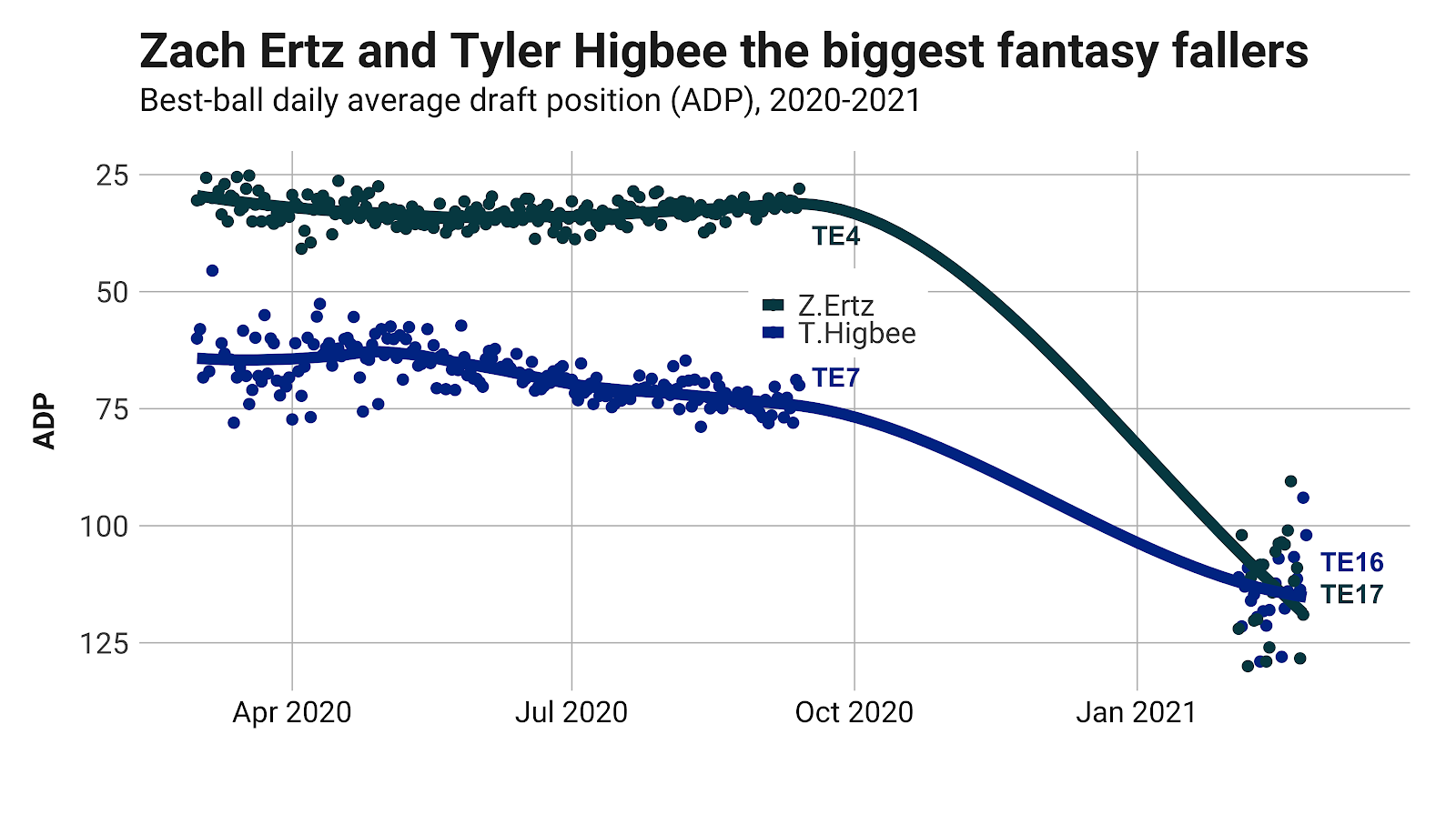 Ertz hasn’t been a particularly efficient receiver for a few years, but the volume also fell out in 2020. Whether Ertz is in Philadelphia or not next season, he’s likely to bounce back because almost any quarterback will be more efficient than Carson Wentz was last season.

Higbee turned his 2019 breakout stretch to end the season into false promise for 2020. Everyone is off of Higbee this year, with his positional ADP dropping from TE7 to TE16. Not only can Higbee benefit from regression, but volume could also open up if free agent Gerald Everett departs. The key for buying both Ertz and Higbee is that they’re both cheap, and using a pick at TE16 or TE17 is speculative by its very nature.