The wait for the 2020 NFL Draft is finally over, as the NFL general managers of most teams are on the clock tonight. Thanks to our NFL Mock Draft Simulator, we at PFF have been putting you on the clock for two weeks now, and over the last five days, we have recorded every single pick and trade you made for your team.

[Editor’s note: The information about picks and trades is the only information we saved from our users.]

This article is supposed to give an idea of how to use this data and to provide a brief summary of the will of our users.

We start with some pretty basic analysis of which settings our users liked for their mock drafts. How did they compose the draft board? And how many rounds did they simulate?

Whether driven by laziness or preference, most of our users stayed with the standard setting of a 50:50 blend of Mike Renner’s PFF Big Board and the public board generated by Benjamin Robinson’s GrindingTheMocks.com.

Most of our users went all the way to pick No. 255 — that’s impressive endurance.

Cowboys Nation reigns supreme among our users. The Houston Texans, Los Angeles Rams and Buffalo Bills might be a bit underrepresented because they don’t possess a first-round pick in this year’s draft. 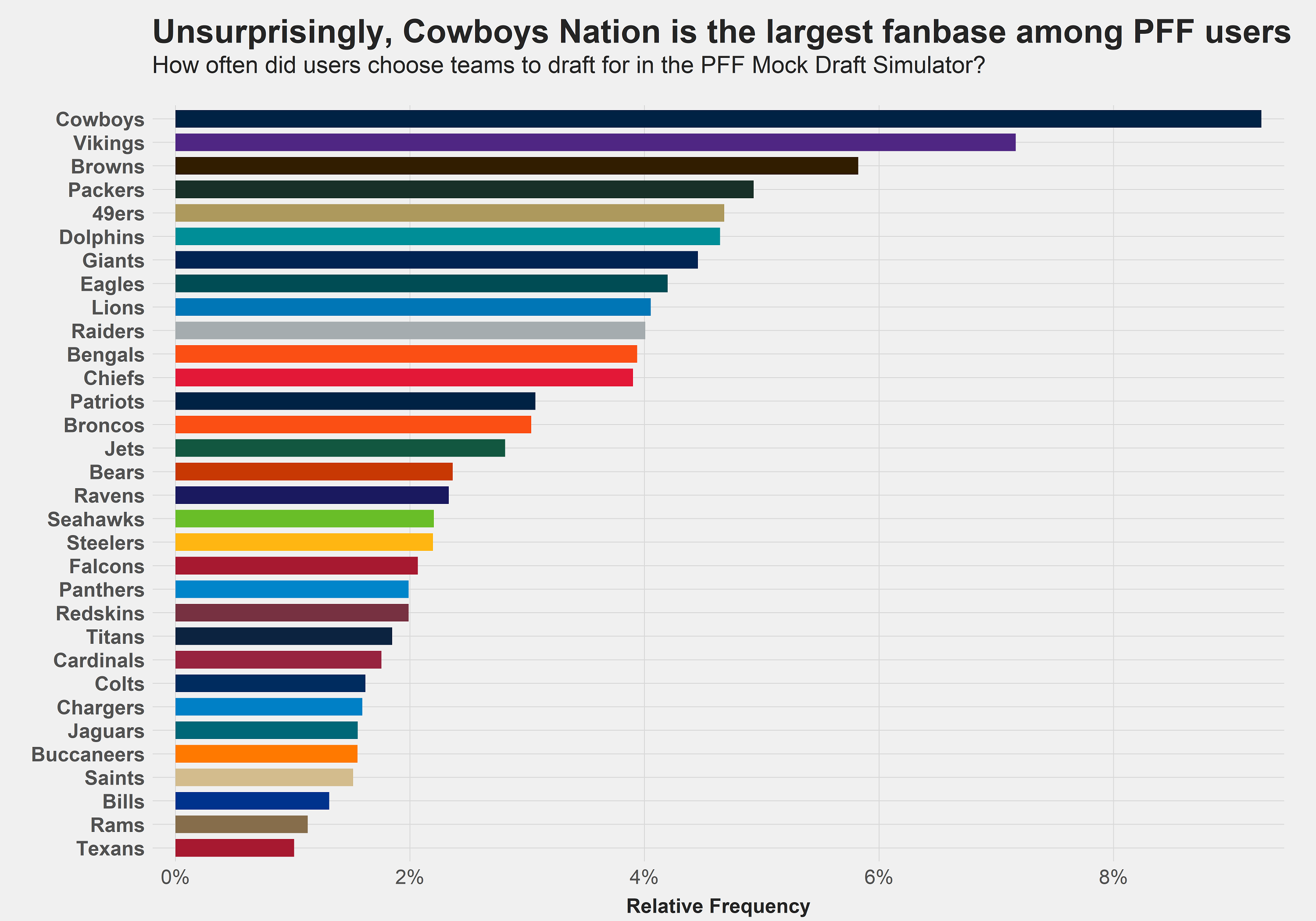 The most frequent pairs of teams were the Giants and Lions (I can’t think of a better reason than Giants fans wanting to make sure a certain player would be on the board at No. 4), the Cowboys and Dolphins (the Cowboys have the largest fan base, and the Dolphins have three first-round picks) and the Patriots and Bucs (Tom Brady and Rob Gronkowski connect fan bases), which picked up steam after the news that Gronk would indeed come back to play football.

This might be the most interesting data that comes out of the analysis. Which are the most frequent team-prospect pairings in the first two rounds? 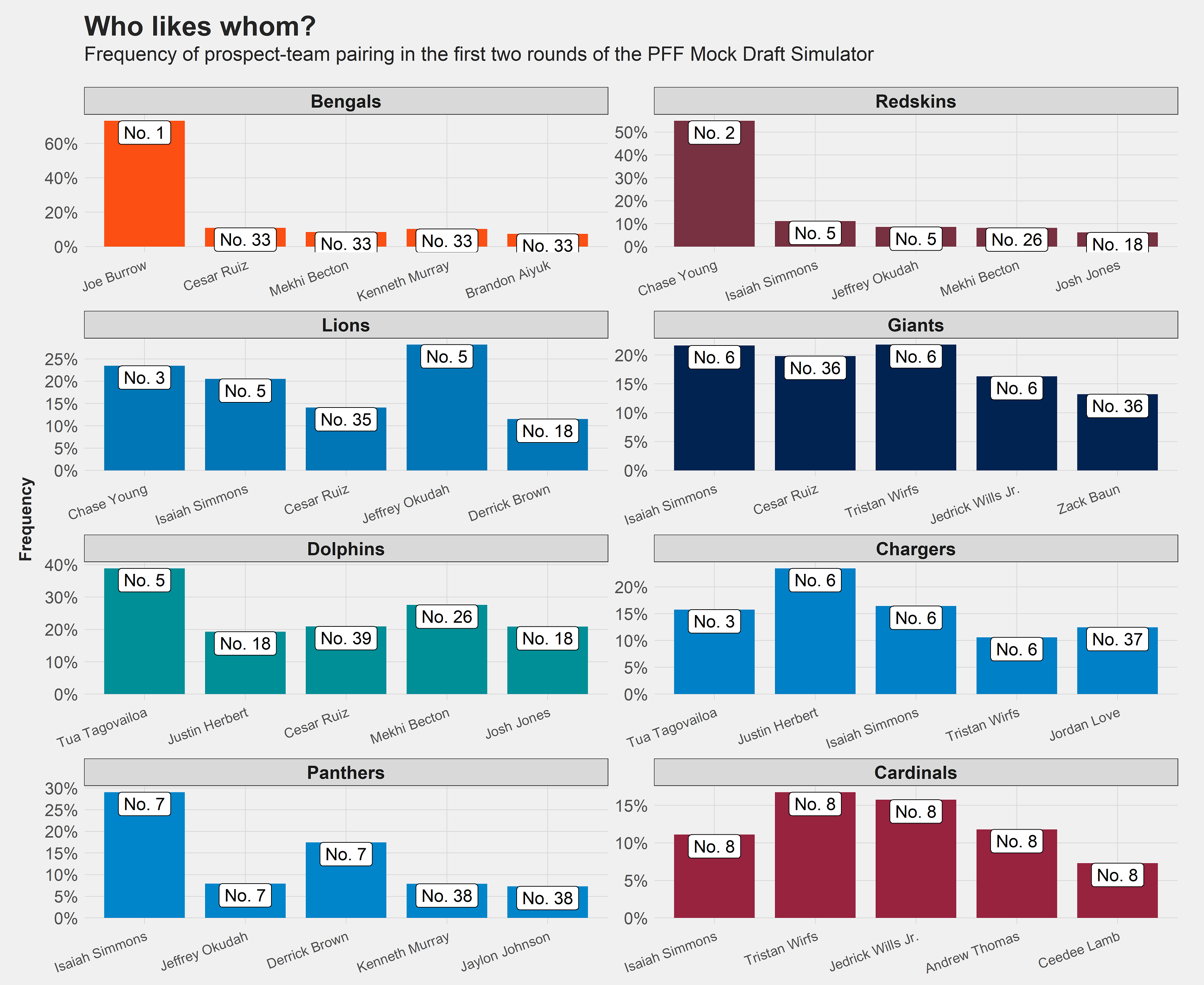 The pick on the labels represents the draft spot at which the respective player was picked most often. This doesn’t mean the player wasn’t selected at other positions from time to time, though (players were picked after teams traded back, for example). As an interesting example, the Lions fans picked Jeffrey Okudah more often at No. 5 than at No. 3, which is a very smart decision. 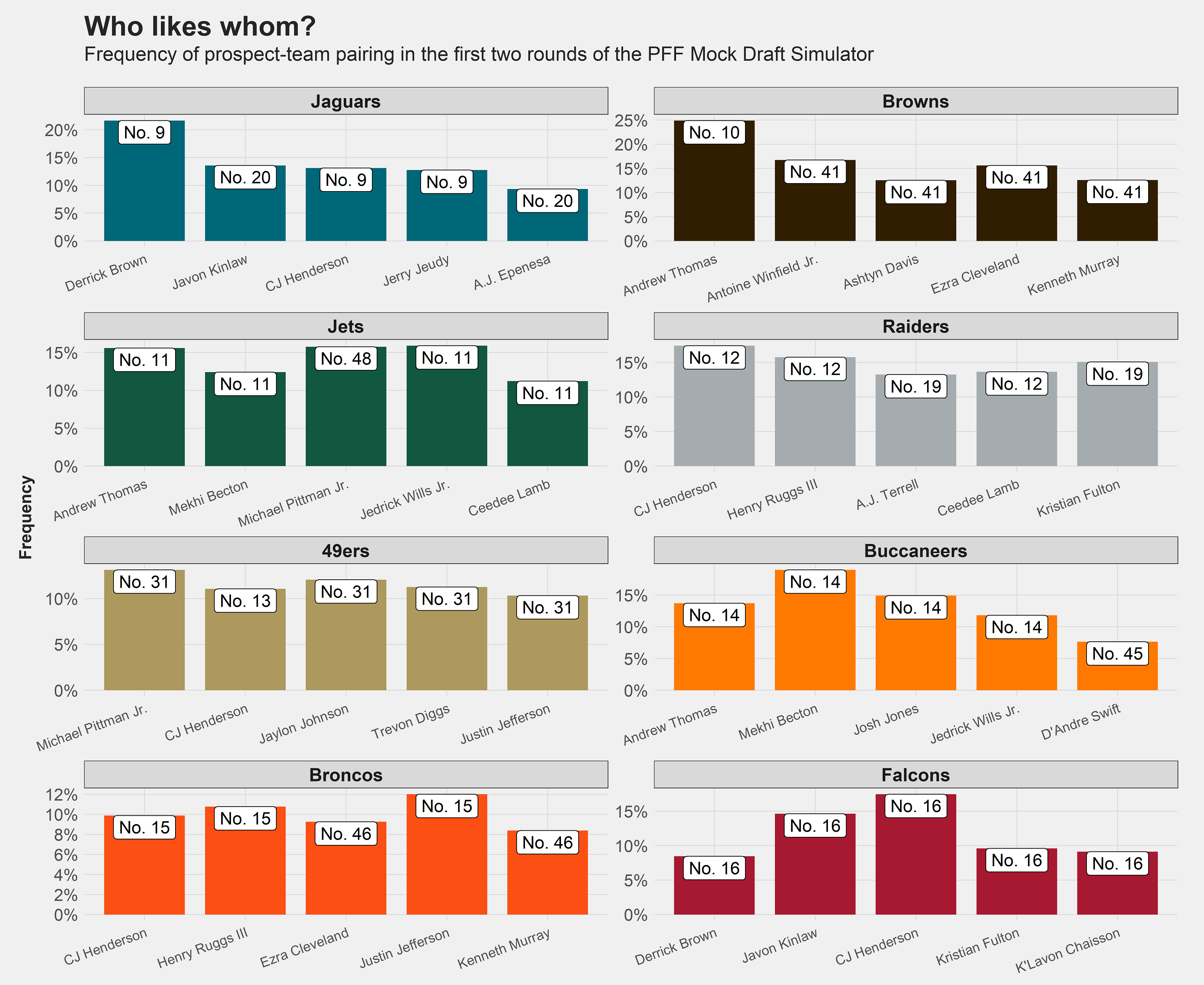 Starting with the middle of the first round, the most frequent team-prospect pairings were Derrick Brown to the Jaguars and Andrew Thomas to the Browns. 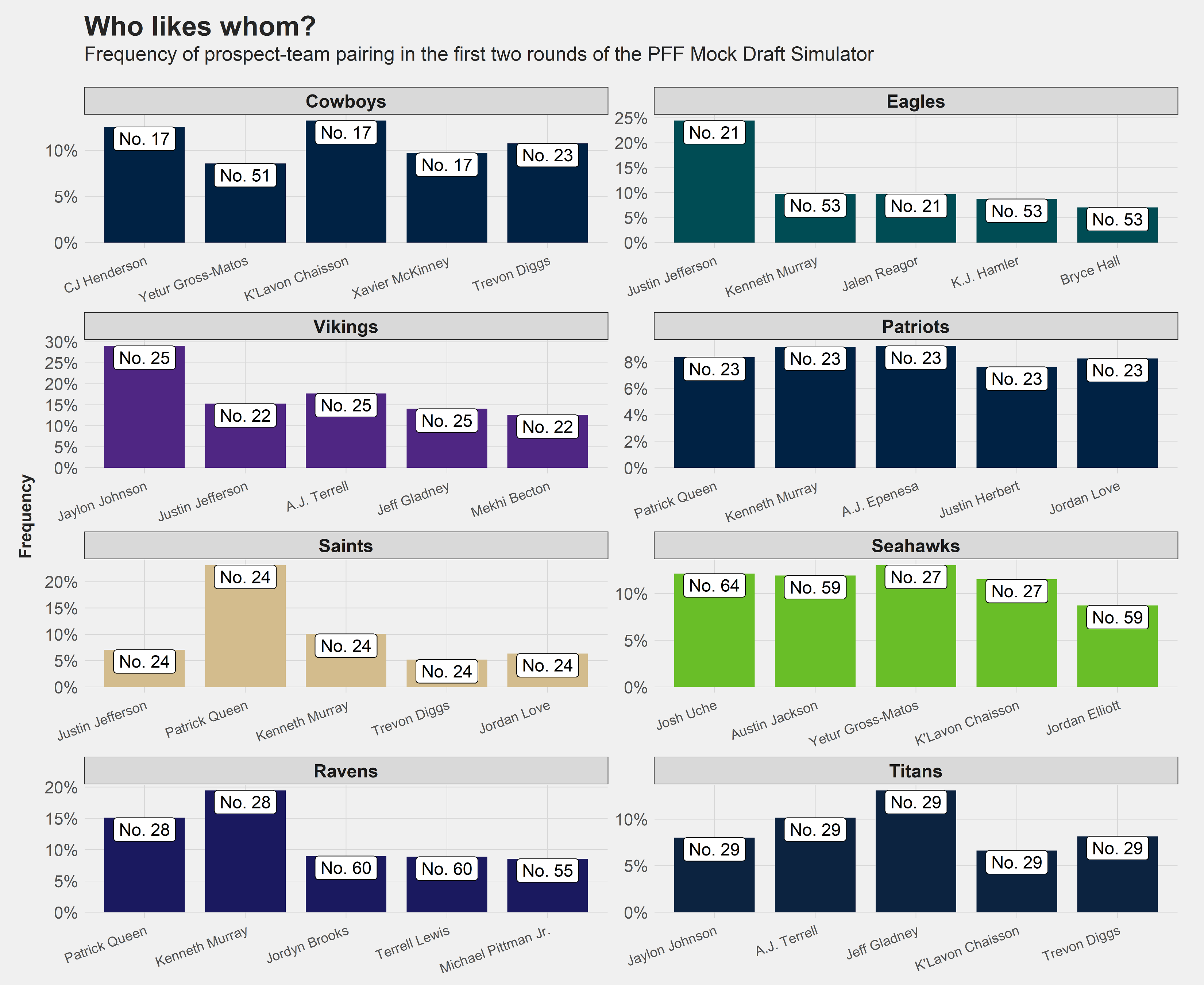 The distribution becomes flatter in the 20s, but the Eagles and Vikings are pretty clear on which players they want — Justin Jefferson and Jaylon Johnson,  respectively. 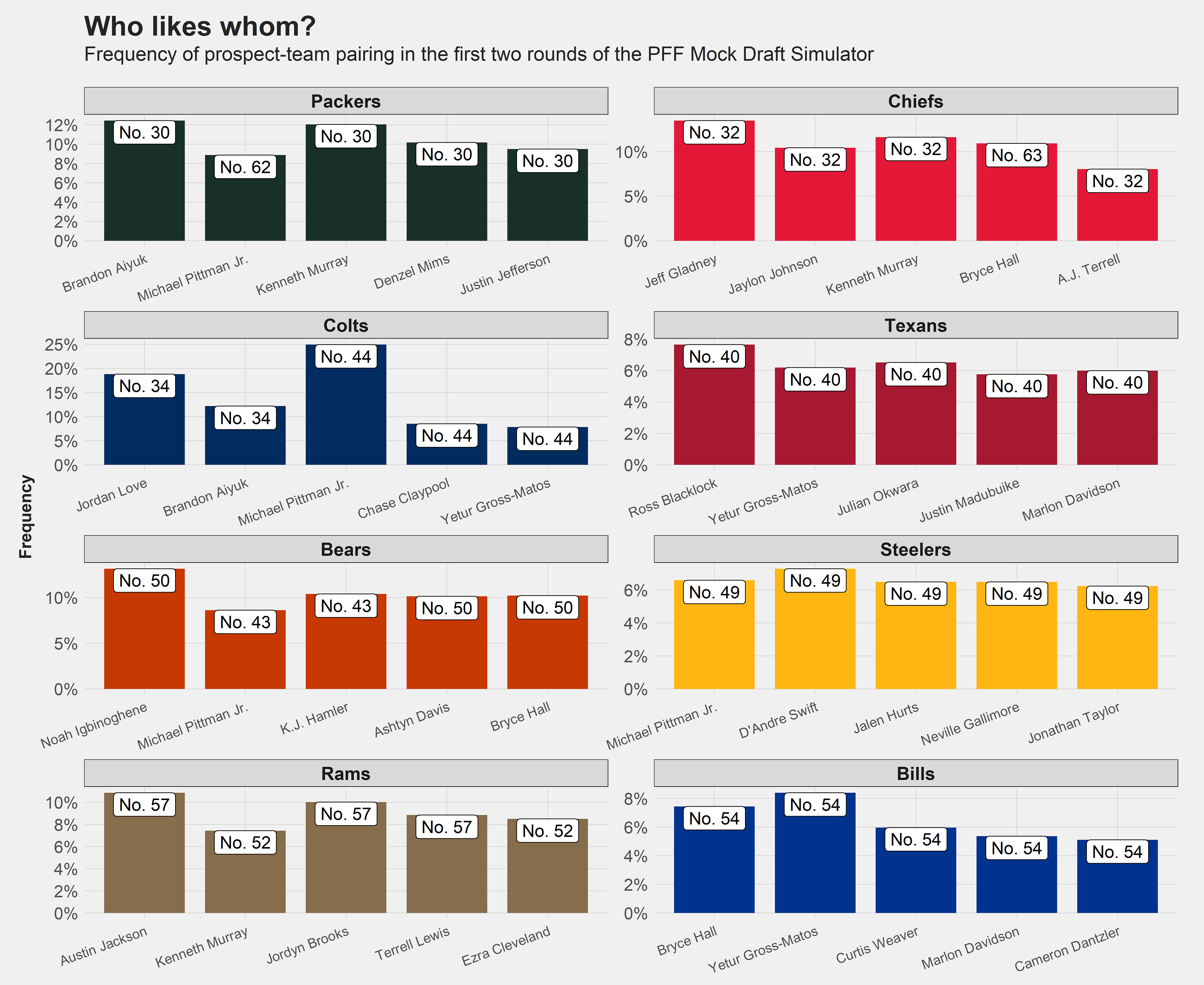 In the second round, Michael Pittman Jr. to the Colts makes a lot of sense, and our users apparently have the same opinion.

Do you like the PFF board or the public board?

For that matter, we compare the pick value of each pick (measured by expected PFF WAR of the draft position) to the implied pick value by the rank of the prospects on both big boards. Which board saw the greater discrepancies to the user draft picks? 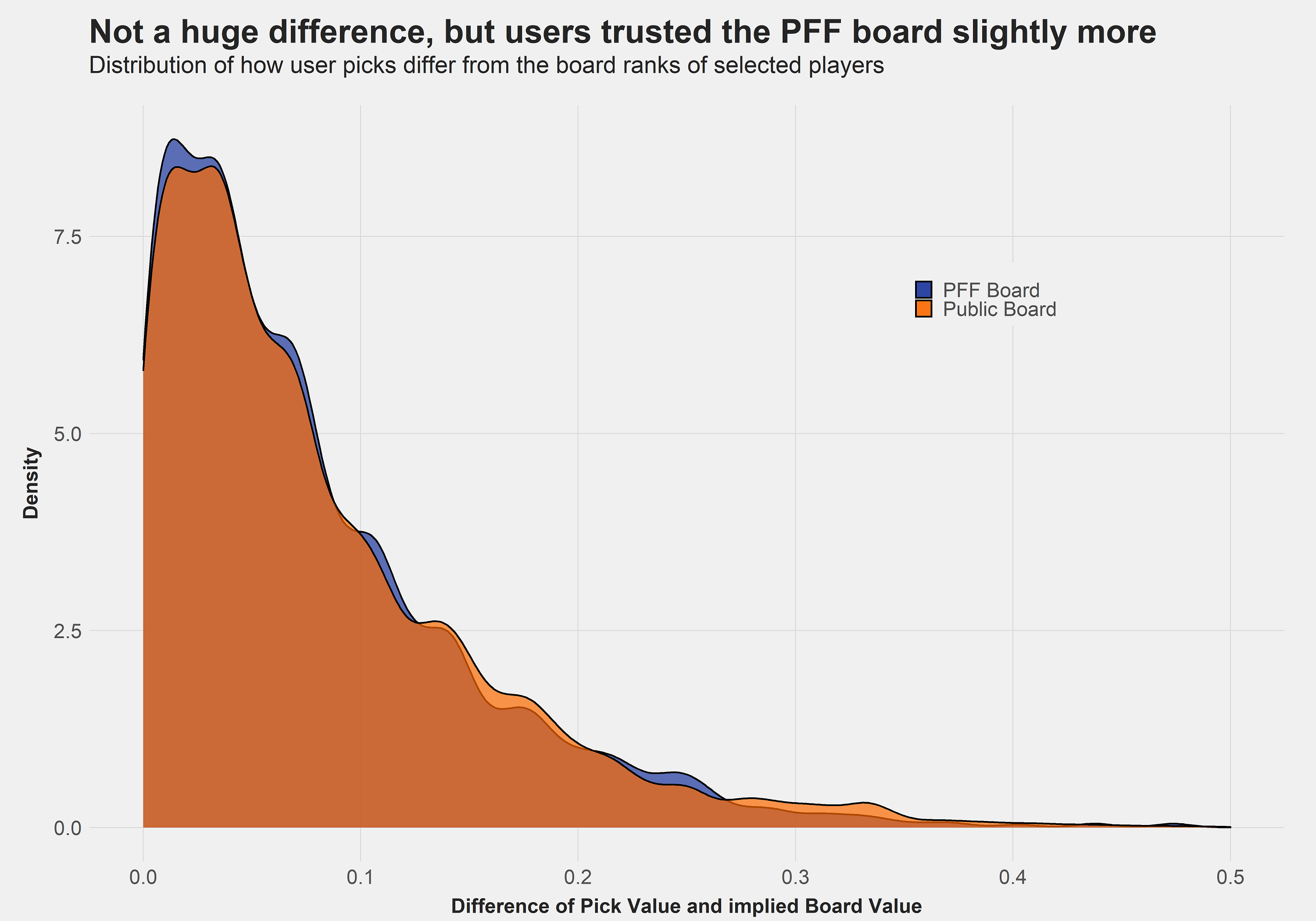 It turns out that the density for low differences is slightly higher for the PFF big board, i.e., user picks were closer to our board.

Your willingness to trade

The following chart summarizes the willingness to trade as well as the trade success of all NFL fanbases. 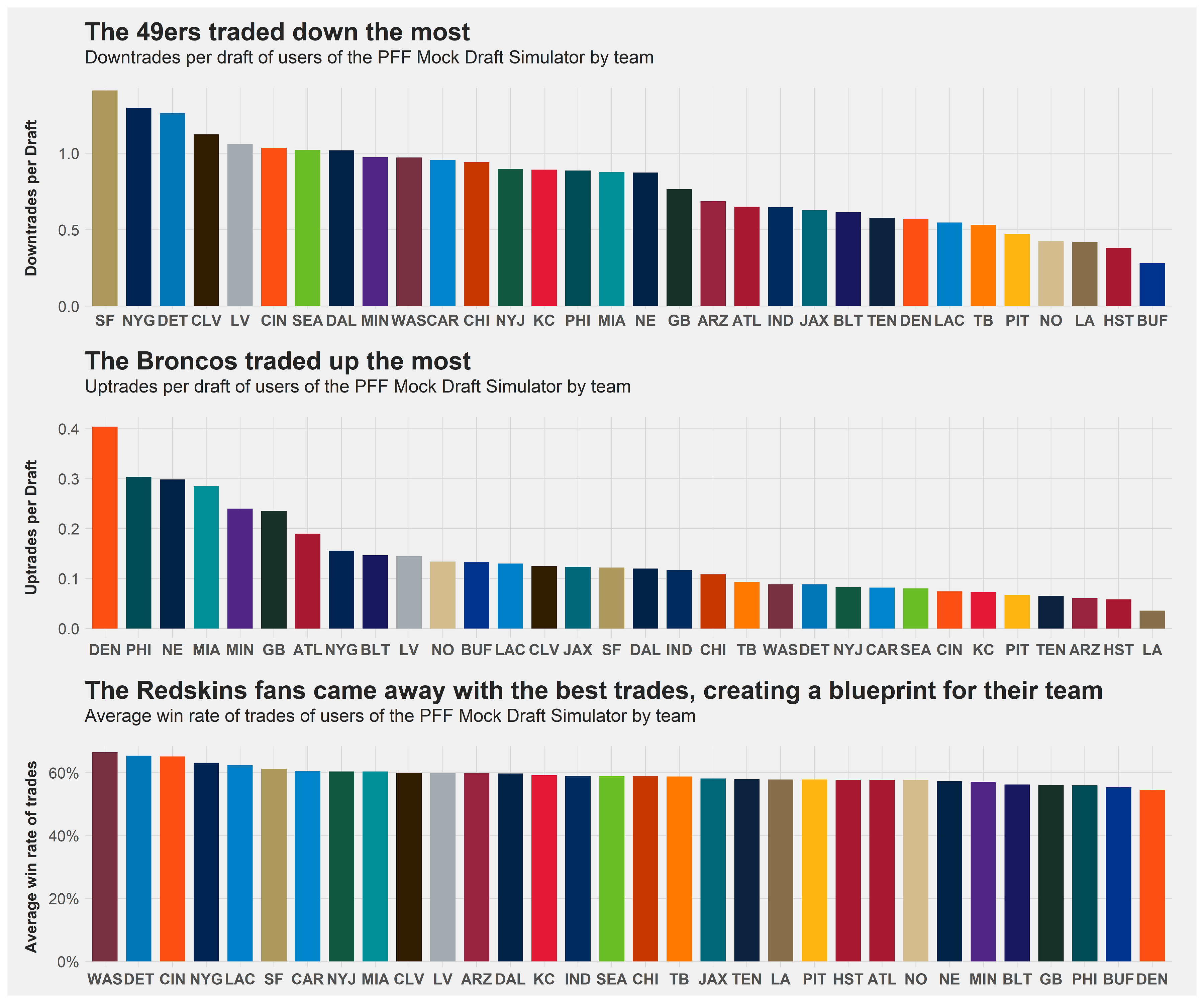 The 49ers go into the draft with two first-round picks, and their fans have multiplied that strong draft capital more than any other fanbase by trading down 1.4 times per mock draft on average.

On the flip side, the Broncos fanbase feels like their team needs to go get their guy earlier than at No. 15. Who did they trade up for? The most frequent picks after trading up (in order): Jerry Jeudy, Henry Ruggs III, CeeDee Lamb and Isaiah Simmons.

Other teams that moved up to select their favorite player were the Eagles (CeeDee Lamb, Henry Ruggs III, Jerry Jeudy and Kenneth Murray) and the Patriots (Tua Tagovailoa, Cole Kmet, Justin Herbert and Jalen Hurts).

The fans of the Washington Redskins generate the best trades for their team on average, and we think this is a model the team should follow tonight.

Finally, how did our users fare in our draft grading system? The answer: Pretty good! 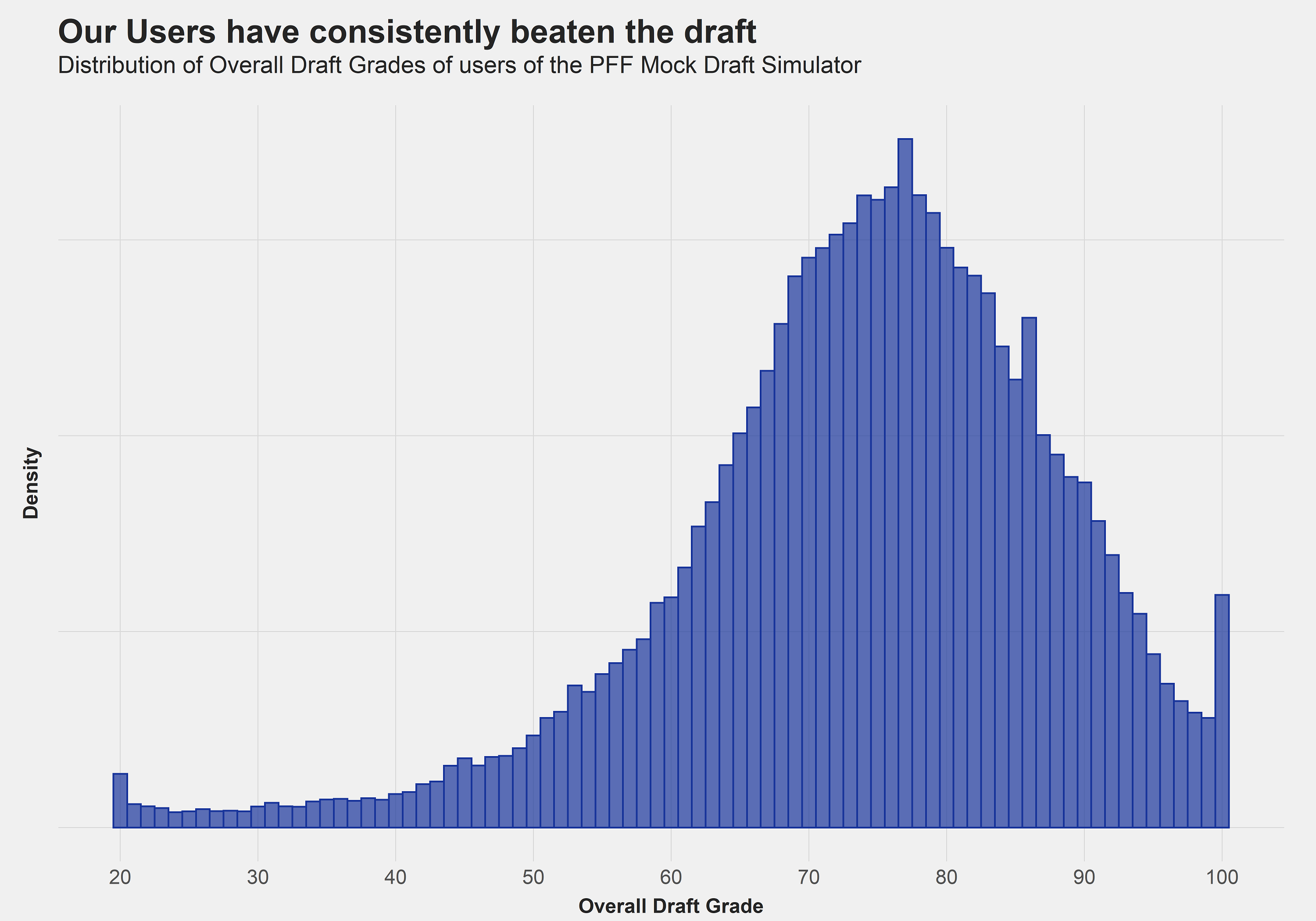 In total, 86% of all users were able to get at least an average grade, and 35% of all users gained a very good grade above 80.0. Eleven percent of our users managed to come away with an elite grade of 90.0 or higher.

Which fan base graded out the best? This honor goes to the Detroit Lions —  congratulations! 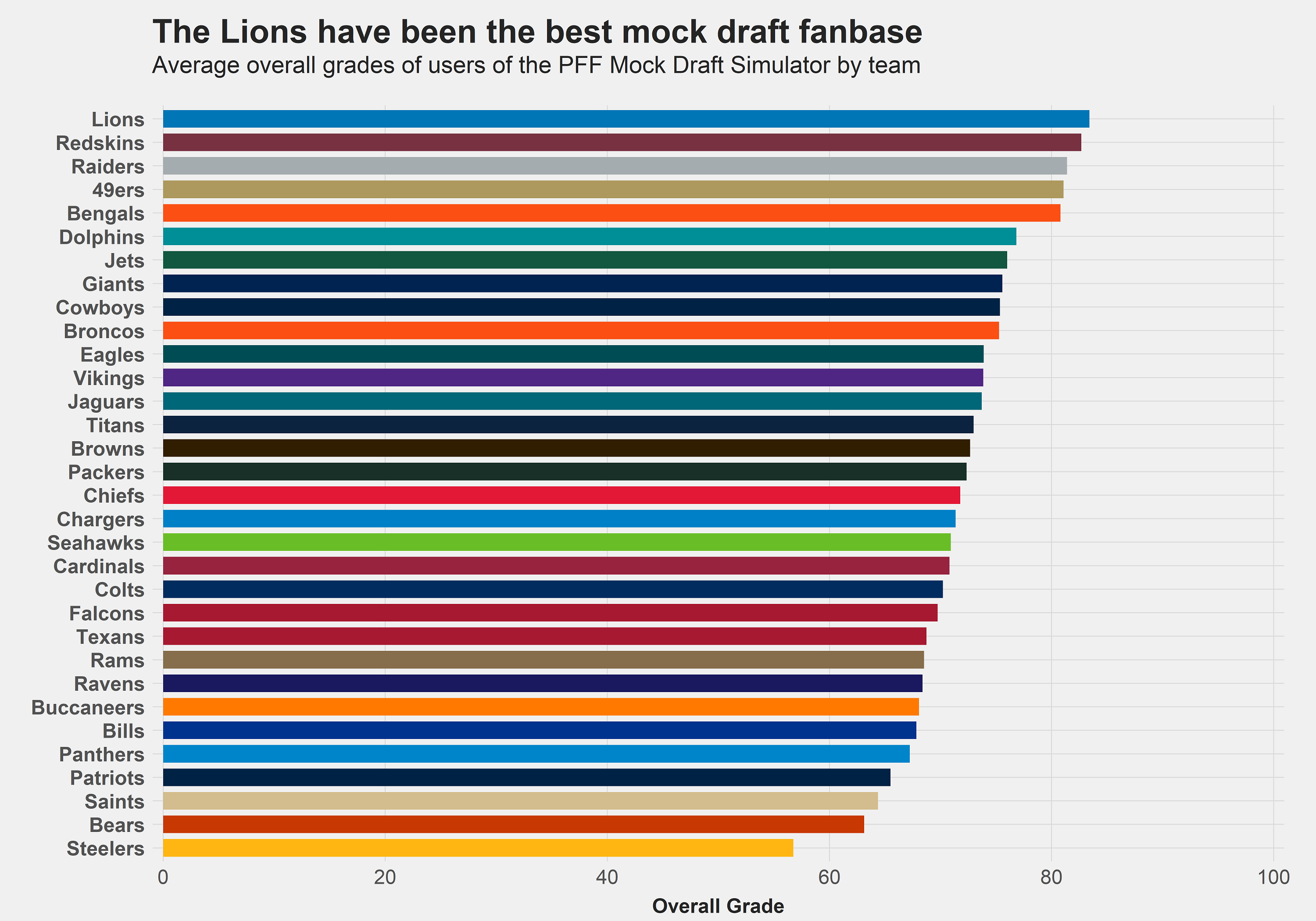 We launched the PFF Mock Draft Simulator on April 8, and the feedback couldn’t have been better. Analyzing user data from only five days has been fun, but we’ve only scratched the surface of using this data to gain insights.

Thanks to all of our users for using the PFF Mock Draft Simulator. We will be happy to see you again next draft season.

To leave the stage with a bang, this year’s draft season is not over. Starting on Friday morning, you can use the simulator as usual, but you have three more options: