[This story was originally published on March 7, 2019, but is being repurposed here today to signify the release of Version 2 of the 2019 NFL Draft Guide.]

With the 2019 NFL Scouting Combine in the books, we've finalized our 2019 NFL Draft Guide and released it to all PFF EDGE and ELITE subscribers! The PFF Draft Guide features player profiles unrivaled in the industry with four-year college grades, advanced statistics, measurements, ball-location heat maps for quarterbacks, receivers and defensive backs, combine data and much, much more. 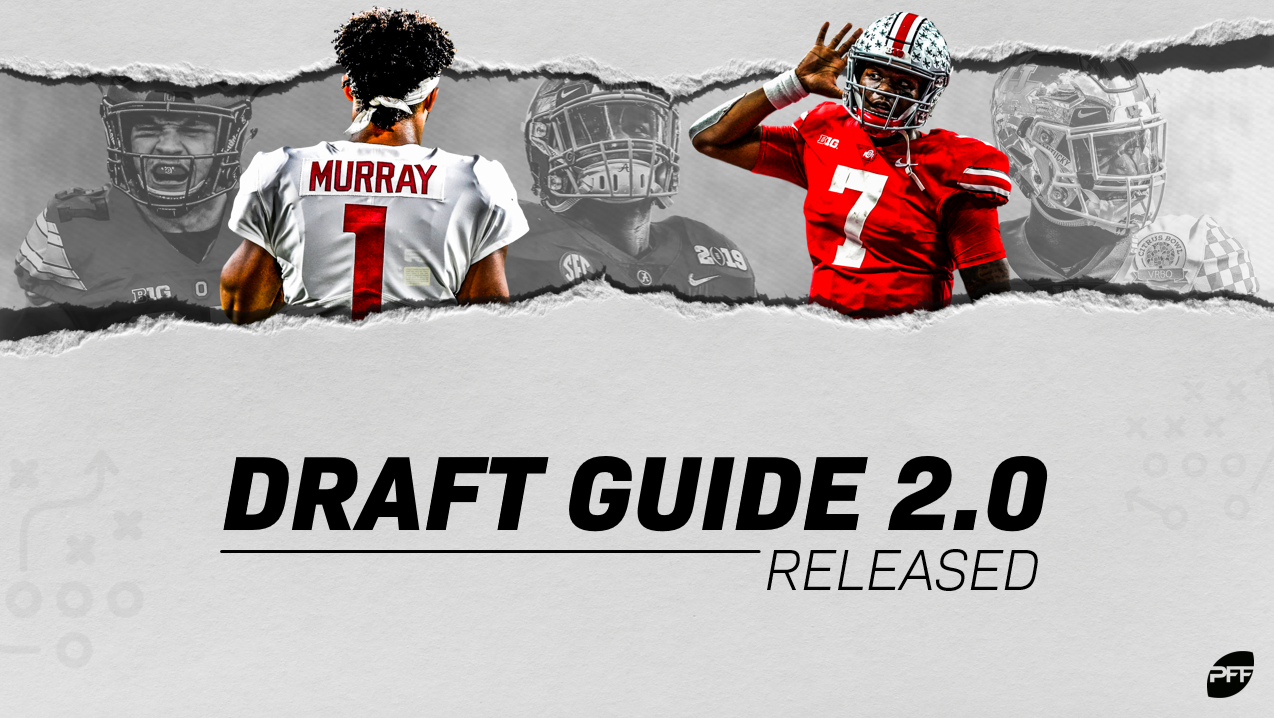 Here's a glimpse at what is inside of the 2019 NFL Draft Guide. Included in this season's draft guide will be 600 player profiles from nearly every school across the country.

As for what you will receive when you sign up for PFF EDGE or ELITE, let's discuss: 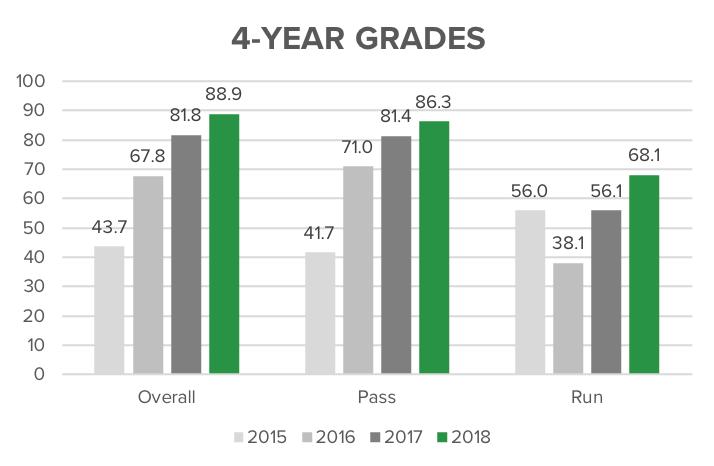 As even the lesser-involved football fan may know, we at Pro Football Focus have graded every snap of every player during every game at the professional level since 2006 and at the college level since 2014. In that process, our game-by-game and season-level grades are unmatched, unrivaled and unparalleled. And, for the first time in our history, we have every draft-eligible player's full career's worth of grades in our 4-year grades section.

The 2019 PFF NFL Draft Guide will feature every player's previous four season's worth of grades in overall and their major facets of play, so, for instance, we'll have passing and rushing grade for a quarterback.

Want to see how well a player has improved over his time in college? Look no further than the 4-year grades section. 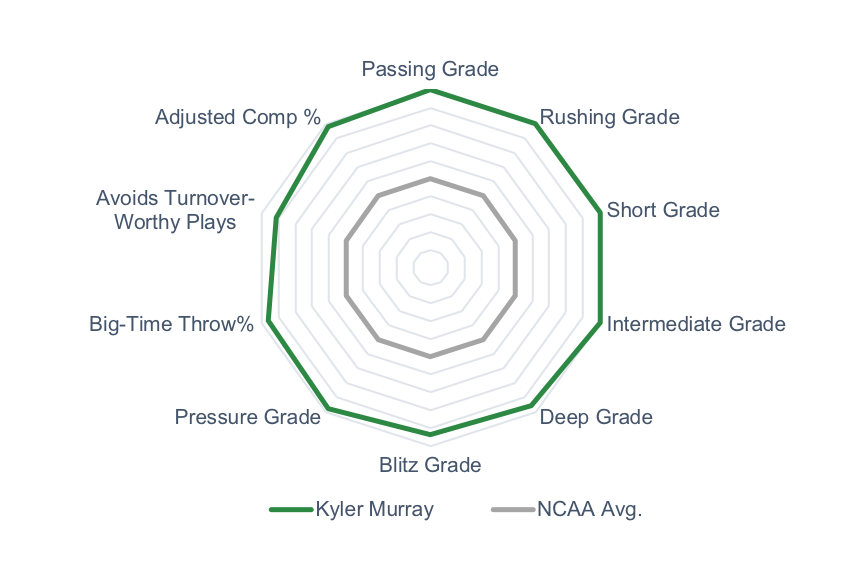 One of the main items of interest in any draft scouting report is how well that player compares to others around him. Our aptly-named Spider Chart section shows off just that. Inside of every player's profile, their individualized spider chart will showcase just how well they compared to the NCAA average at all sorts of different statistics and grades.

A byproduct of PFF grades just as much as they are a factor into the final 0-100 grade itself, PFF's advanced statistics go a long way at telling just how well a player performed outside of the general box score. Our advanced statistics vary from position to position but one thing is for certain, you can only find them here, inside the 2019 NFL Draft Guide.

Want to know how accurate a quarterback was against pressure? Want to know the number of snaps per outside pressure an edge defender recorded? How about how many snaps spent in coverage per yard allowed from a cornerback? Those and so many more are only found in the 2019 NFL Draft Guide.

Another truly unique facet of our advanced play-by-play grading is the amount of data we have not only at the game level or season level but at the individual player level, dating all the way back to 2014. Inside of every player's profile will also be their individual raw statistics that showcase their basic box-score data with a few other different PFF numbers for clarity's sake for the layman. Included will be every player's snap count; something PFF has become famous for over the years. 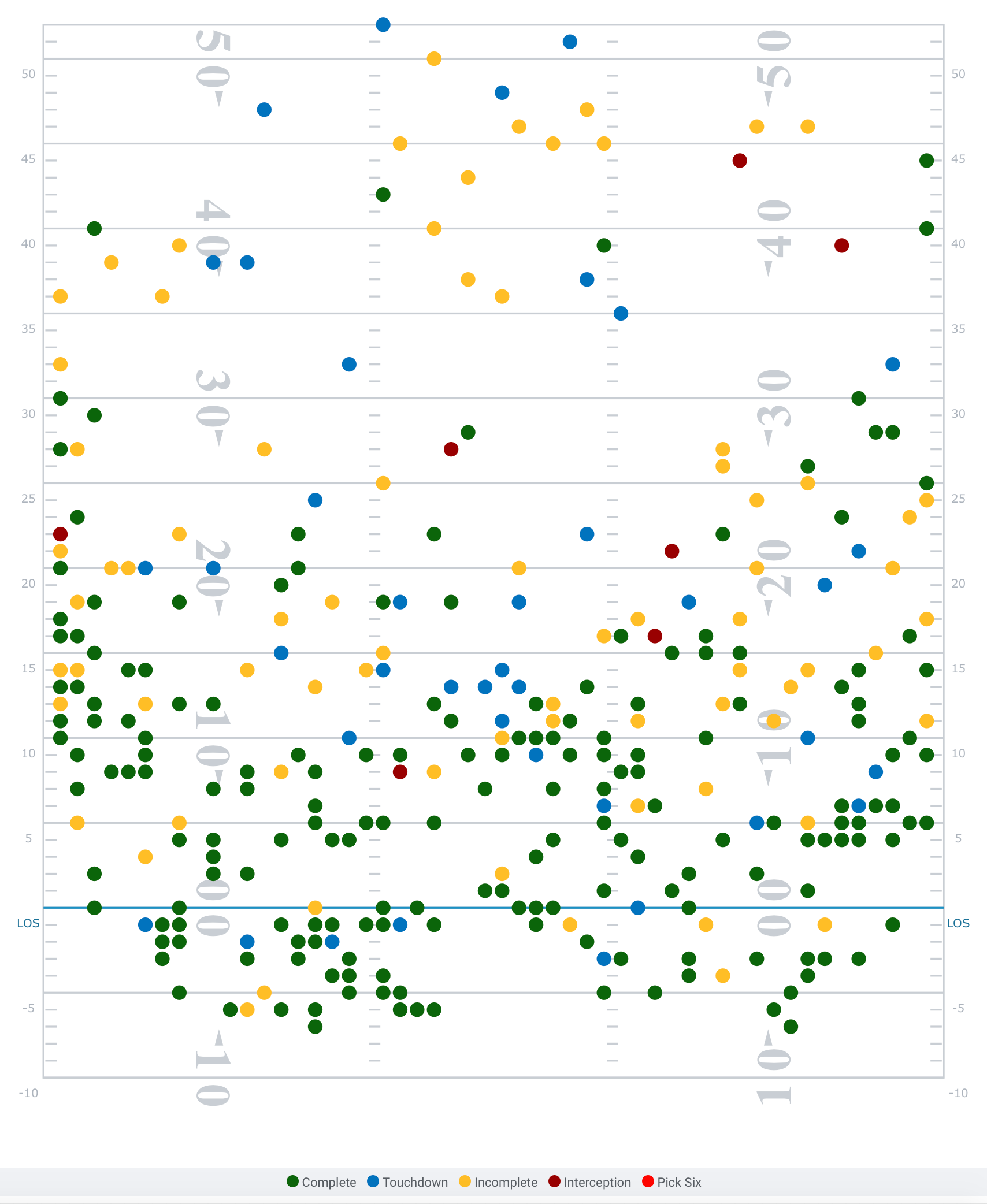 A product of our advanced ball-location charting and in-depth quarterback study, one of the processes at PFF is charting the location of every single pass from an accuracy, separation and coverage standpoint. We track not only whether a pass was completed, but also the coverage on a throw, the level of separation by a receiver and the exact location in which a quarterback placed every pass. We also look at where every pass was completed on the field, both how far down the field according to the line of scrimmage and how wide across the field according to the field boundary lines.

Our QB heat maps are unrivaled in that they've been checked, re-checked and reviewed for accuracy to unveil the most accurate ball-location charting in the industry.

How many passes did Drew Lock complete downfield? How many of Will Grier's throws went for touchdowns that he targeted at least 20 yards downfield? How well did Byron Murphy cover defenders in the intermediate range? Our heat maps have you covered.

After several more hours of studying tape and our data on prospects, we've made some position switches as to where some players project at the NFL. Sutton Smith and Nate Harvey each moved from edge defender to linebacker while Chauncey Gardner-Johnson and McKinley Whitfield moved from cornerback to safety, among others.

The quarterbacks each got a second round of information added, this time with the ball location of every pass from their final season in college. Represented on the passing maps are completions, incompletions, touchdowns, interceptions and even pick-6s, if applicable. 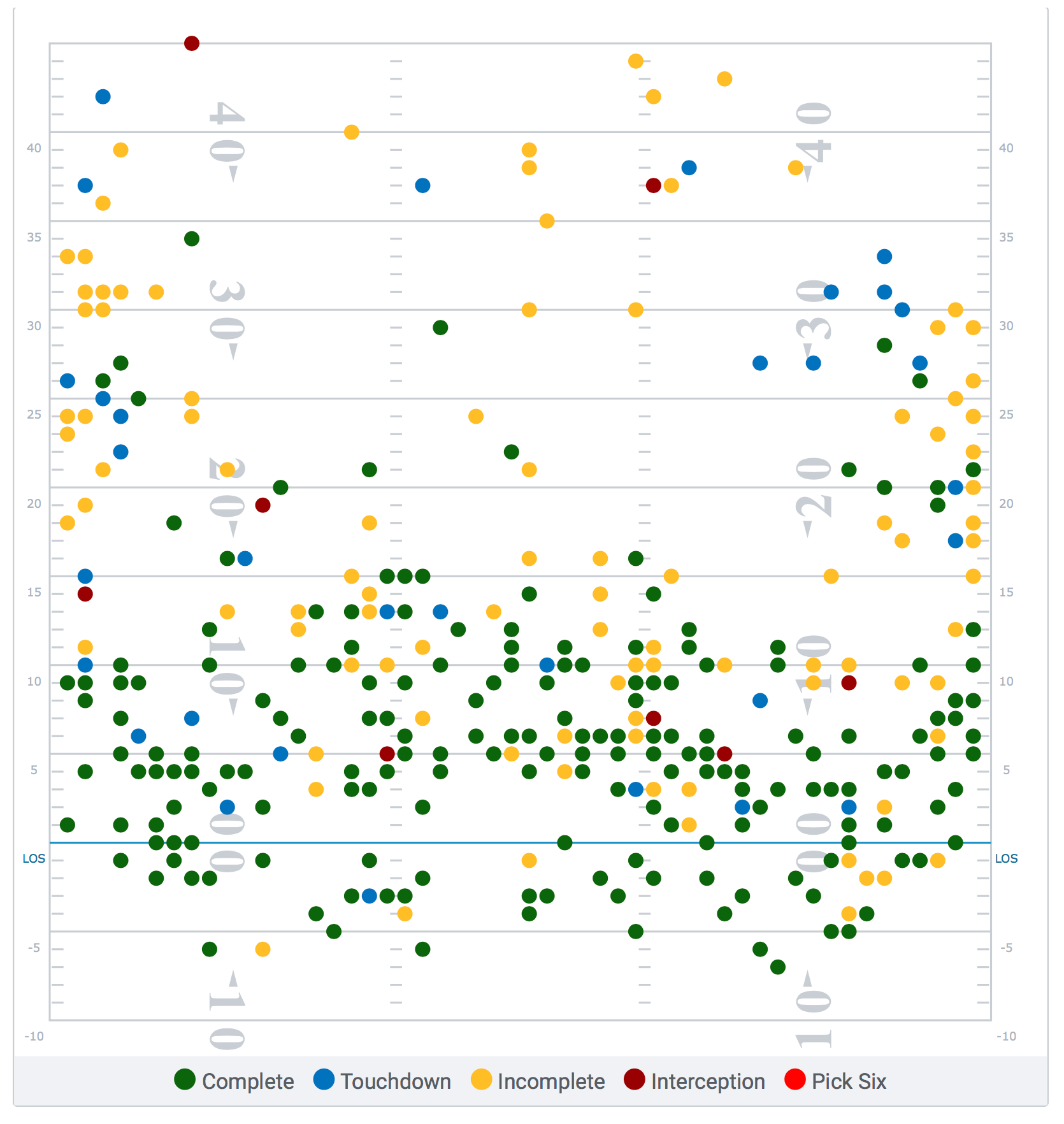 With Delaware safety Nasir Adderley's awesome 2018 season in hand, we went back and graded several FCS teams to give a full set of data to numerous FCS players who have shown the potential to stick in the NFL. Adderley, QB Easton Stick, CB Jimmy Moreland and others are now featured in their respective position groups under the same amount of detail as their FBS counterparts.

For the fourth straight year, our team of analysts graded not only the Senior Bowl but more importantly, every single rep from 1-on-1s and 7-on-7s to pass-blocking vs pass-rushing sets and every throw in between from the Senior Bowl practices. In our exclusive data, the Senior Bowl is broken down like never before with each player receiving an individualized player profile that includes type of coverage faced, route types and contested catches for receivers as well as pass-rush moves, stances and matchup data for linemen. The Senior Bowl has never been broken down like this before. 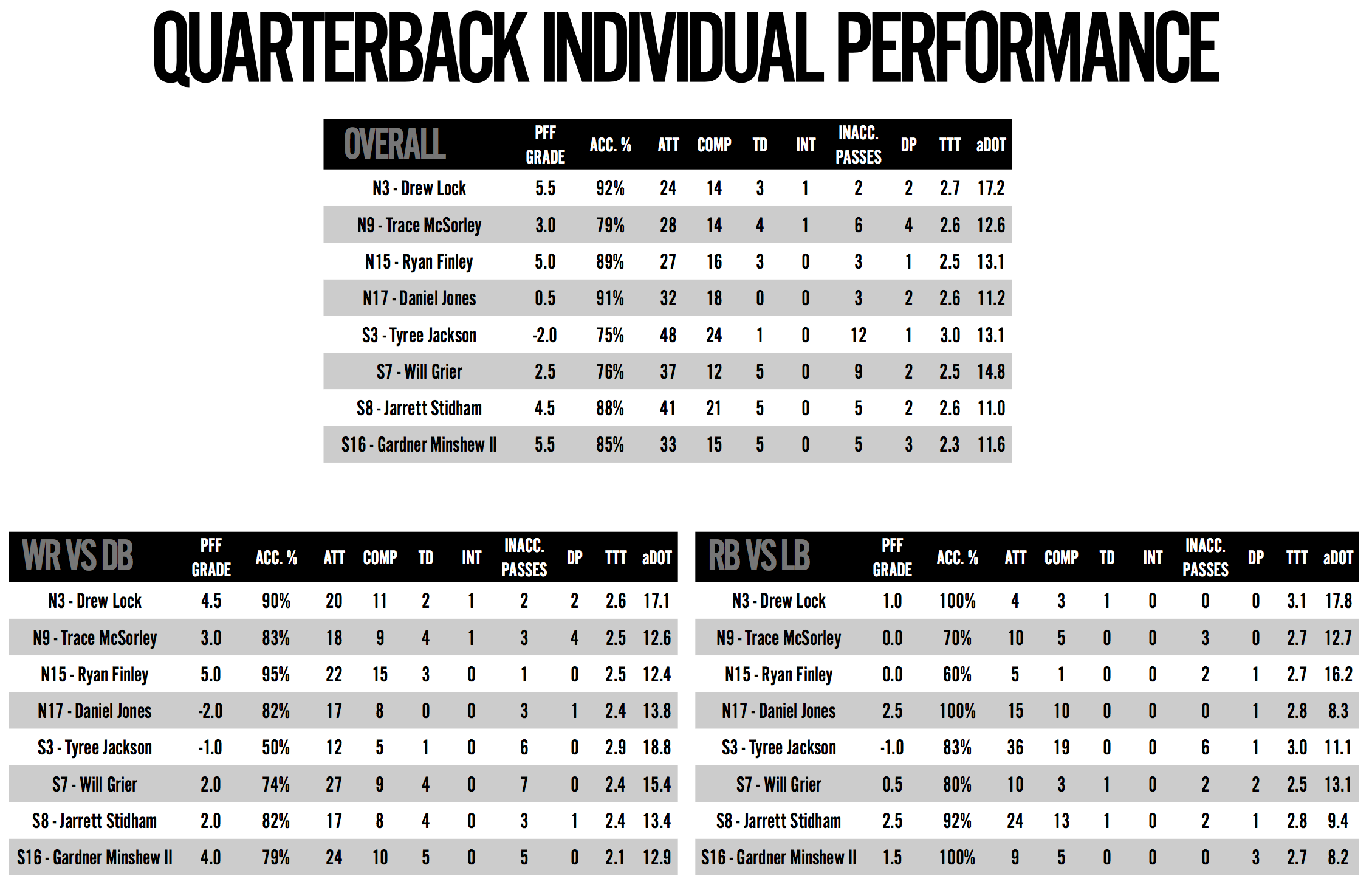 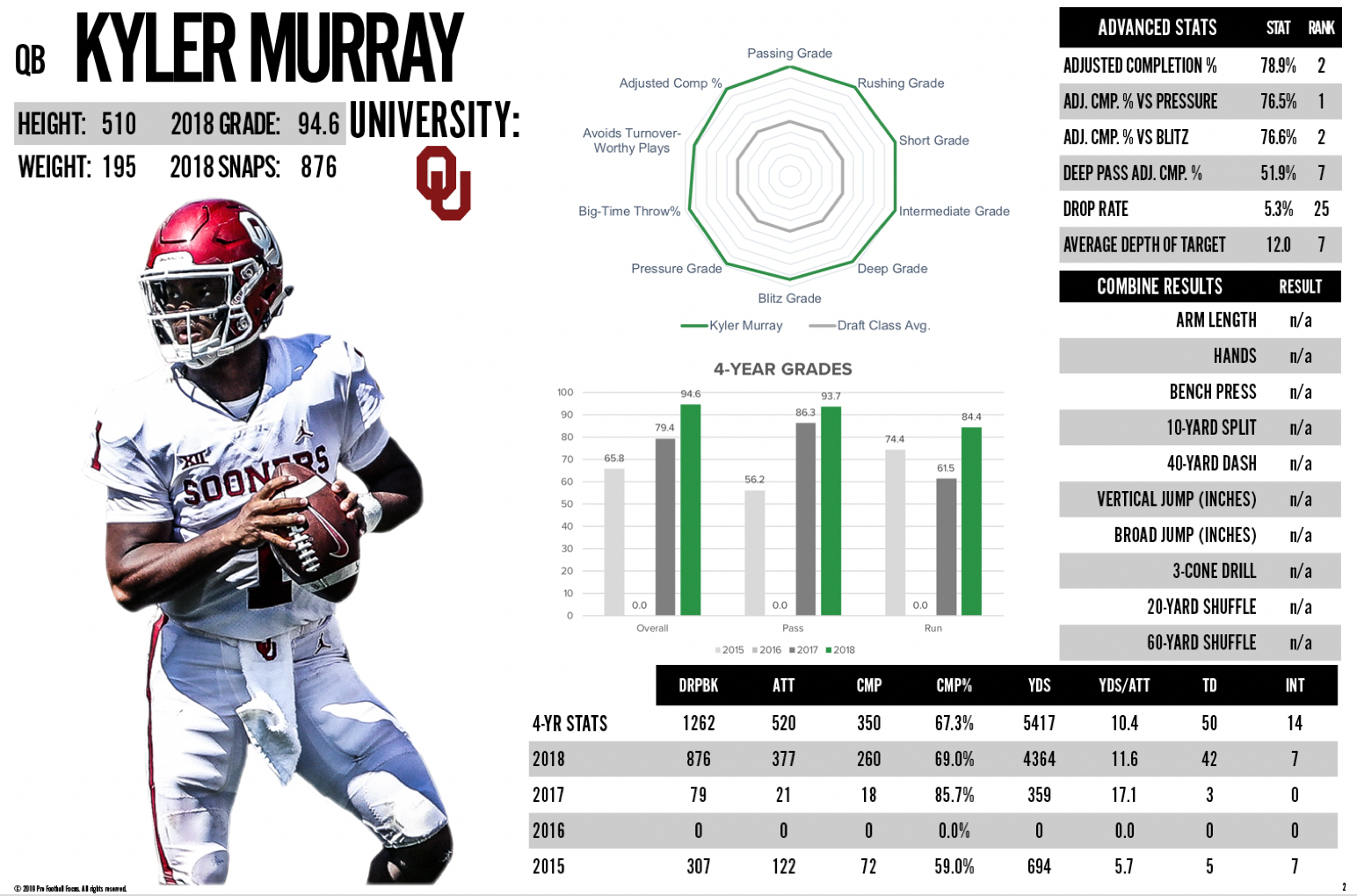 Included in PFF's 2019 NFL Draft Guide will be 600 player profiles, all featuring the information above. With the 2019 NFL Scouting Combine now behind us, we've updated the “Combine Results” section of the guide and released it to all EDGE and ELITE subscribers.

As a bonus to our PFF Elite subscribers – we've broken down and featured our signature stats noted in the 2019 NFL Draft Guide in a completely separate breakdown, available here.

Be sure to grab your PFF EDGE or ELITE subscription and ensure you land your copy of the 2019 NFL Draft Guide.