Ranking the best YAC receivers in the 2021 NFL Draft

Some of the NFL’s best young wide receivers have recently transcended previous expectations for total yards after the catch and forced missed tackles at the position. San Francisco 49ers’ Deebo Samuel and Tennessee Titans’ A.J. Brown are two of the league’s best at adding yards above expectation regardless of target depth and basically have been since first setting foot in the NFL. 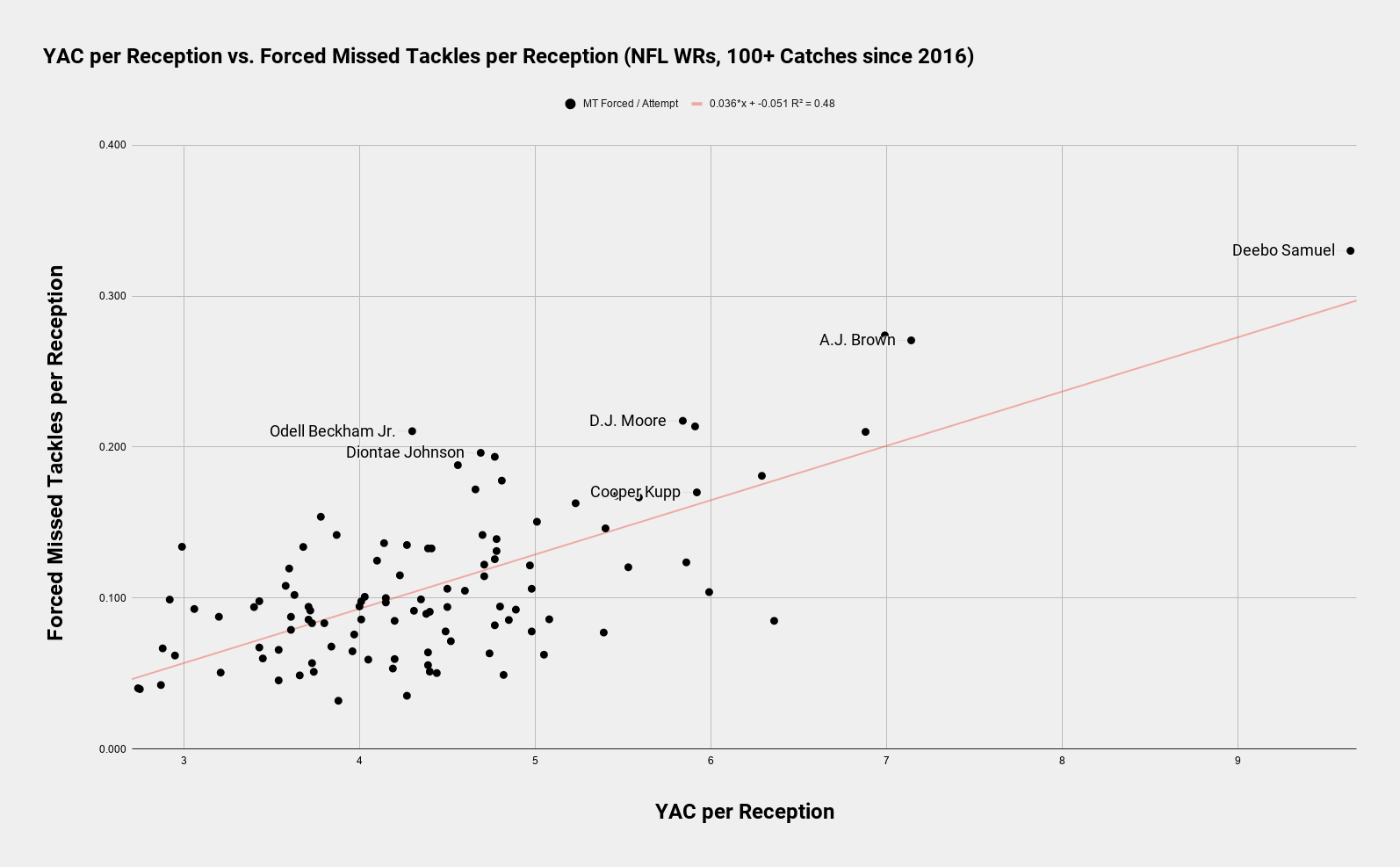 Both A.J. Brown and Deebo Samuel have some of the highest YAC per reception and forced missed tackles per reception averages of any NFL wideout with 100-plus catches since 2016.

While Samuel’s YAC per reception figure (9.64) is a bit of an outlier because so many of his targets come at or behind the line of scrimmage on screens, jet sweeps, etc., both he and Brown have more than exceeded expectations from a YAC perspective even when controlling for target depth. 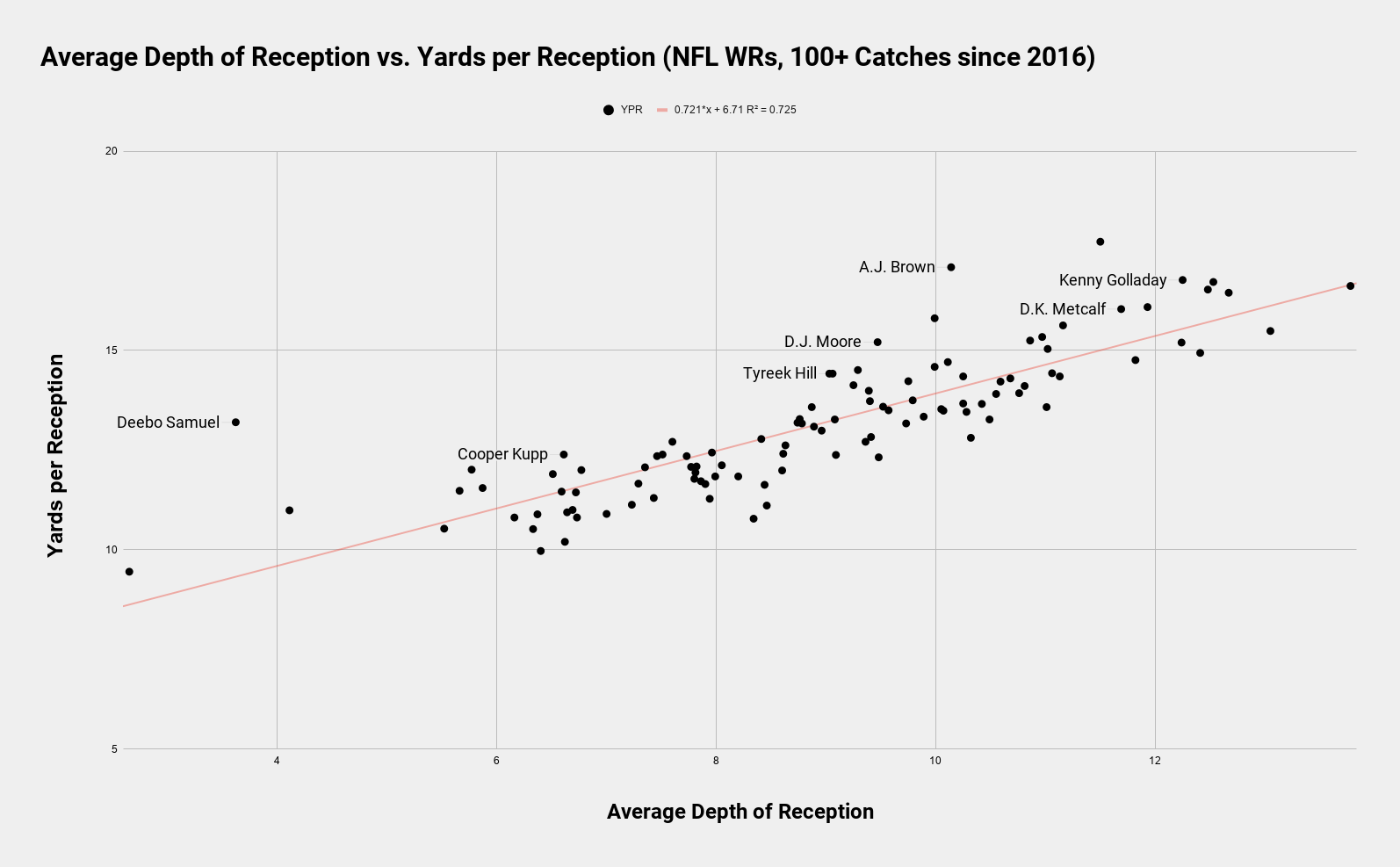 Samuel has the second-lowest average depth of reception of any NFL receiver with 100-plus receptions since 2016 but has still managed to more than exceed expected yards per reception totals.

Both Samuel and Brown offer NFL offenses so much additional value with their ability to create yards above expectation and force missed tackles after the catch. The following is a list of receivers entering the 2021 NFL Draft primed to join Samuel and Brown at the next level.

No Power 5 wide receiver with 100-plus receptions since 2014 averaged more yards after the catch per reception than Alabama’s Jaylen Waddle (9.8). After averaging a stellar 8.0 yards after the catch per reception as a true freshman in 2018, Waddle cleared 10.0 in both his true sophomore (12.2) and true junior (10.1) seasons in Tuscaloosa. The 5-foot-10, 182-pounder is a stick of dynamite with the ball in his hands with absurd straight-line speed and dynamism.

Jaylen Waddle should be viewed as a top-15 talent despite concerns with his size (5-foot-10, 180 pounds).

Waddle's speed/explosiveness is rare, and his short-area quicks/lateral agility is an even bigger separator for him in the 2021 class. pic.twitter.com/wBFdIUtFnL

Waddle’s rare athletic talents also translated to high-end production as a return man at ‘Bama. Among the 88 college football players with 30 or more punt returns since 2014, Waddle ranks first in average yards per return (18.1). Only three other receivers even cleared a 15.0 yards per return average: KaVontae Turpin (16.1), Mecole Hardman (15.4) and Dante Pettis (15.0).

Top eight WRs in the 2021 NFL Draft class, per PFF

Though Toney didn’t clear the 65th percentile for the short shuttle (4.25 seconds) or three cone (6.88), he dropped jaws in the explosive testing. His 40 inch vertical and 11-foot-4 broad jumps ranked in the 90th and 99th percentile, respectively, among wideouts with pro day or combine testing since 1999. He also adds an extra layer to his raw athletic ability with creative footwork before and after the catch.

The cheat code that is Rondale Moore is BACK!pic.twitter.com/YCAadjszCo

The 5-foot-7, 180-pound frame will scare some teams away from Moore’s services, but there’s no doubting his ability to make the most of every touch in the NFL. He possesses Julio Jones-level explosiveness and dynamism but is stuck in a Cole Beasley-esque frame. He recorded a 4.29-second 40-yard dash, 1.50 10-yard split, 43-inch vertical and 6.68 three-cone at his pro day — all ranking inside the 90th percentile among wideouts.

Probably one of the more underrated parts of DeVonta Smith’s game is his ability to create yards after the catch. His 8.77 YAC per reception average across his collegiate career ranks in the 97th percentile among Power 5 wideouts with 100-plus receptions since 2014, and his numbers stand out even further when controlling for reception depth. 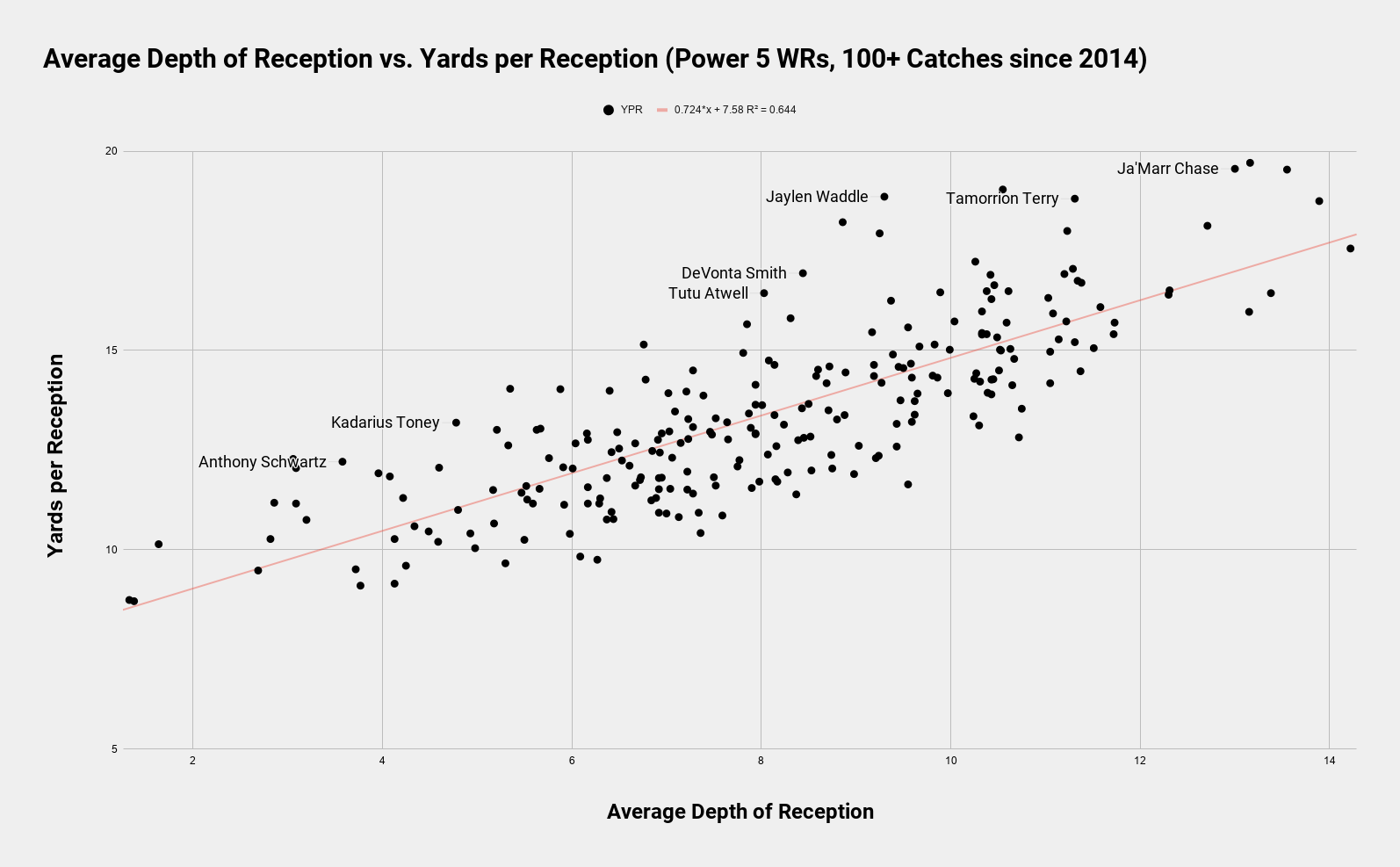 Smith isn’t on the same level as Waddle, Toney or Moore from a pure explosiveness or dynamism perspective, but his craftiness after the catch has paid dividends and led to high-end YAC production across his career. 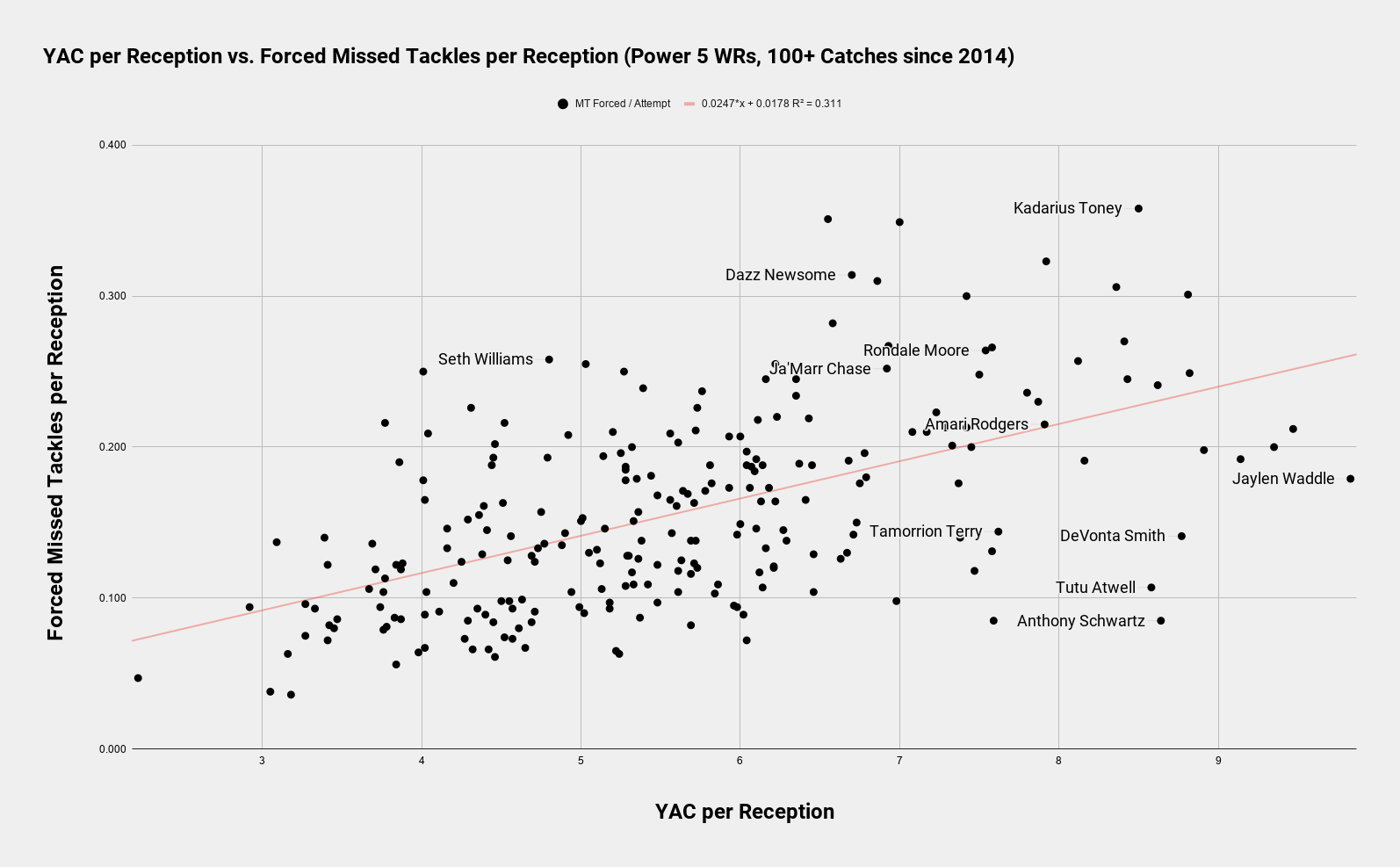 Chase’s insanely high target and reception depth averages (shown in the graph under DeVonta Smith) create far less opportunity after the catch than other wideouts, but he still managed to exceed expectations with the ball in his hands at every turn.

Really Fast but Missed the Cut

There's no denying that Tutu Atwell can fly. The former Louisville wideout runs in the low 4.4s and torched ACC secondaries en route to some of the highest yards per route run, yards after the catch per reception and total yards per reception averages in all of college football. However, he misses the cut because he’s really just fast and fast alone.

Atwell weighed in at 5-foot-9 and 155 pounds at his pro day, good for the lowest weight recorded at a pro day or combine since 1999. He also totaled just a 4.42 40-yard dash (78th percentile) and didn’t clear the 25th percentile in either the vertical or broad jumps. With such a small frame and just slightly above-average athleticism, Atwell will likely struggle to break tackles and make a name for himself after the catch with fewer wide open spaces in the NFL. His career forced missed tackle rate ranked in just the 26th percentile among qualifying wide receivers.

Anthony Schwartz is in a similar spot as Atwell — the kid can fly but that’s about it. At 6-foot and 186 pounds, Schwartz clocked a 4.26 40-yard dash (99th percentile) but failed to clear the 65th percentile in vertical, broad, short shuttle and three-cone drills. He also recorded just 0.09 forced missed tackles per reception, ranking in the 12th percentile.

While he isn’t particularly explosive or dynamic, Amari Rodgers is an extremely strong wideout who had defenders bouncing off him throughout a very productive collegiate career at Clemson. The 5-foot-10, 212-pounder averaged 7.9 yards after the catch per reception and 0.215 forced missed tackles per reception with the Tigers, ranking inside the 93rd and 83rd percentile among qualifying wideouts, respectively.

Rashod Bateman’s career YAC per reception and forced missed tackle per reception averages ranked inside the 71st and 90th percentiles, respectively, among qualifying Power 5 wide receivers since 2014. There are no wasted movements with Bateman’s game. He works with efficient feet before and after the catch, which translates to easy separation and yards above expectation.

Rashod Bateman is an advanced route-runner with strong hands in open and contested situations.

He can create separation at and away from the LOS, very smart and likely a top-50 pick.

D’Wayne Eskridge is an older prospect (he turns 24 in 2021) with great straight-line speed and YAC production at Western Michigan. He averaged an FBS-high 14.4 yards after the catch per reception this past season and stood out well above the rest of the Group of 5 pass-catchers when controlling for reception depth. 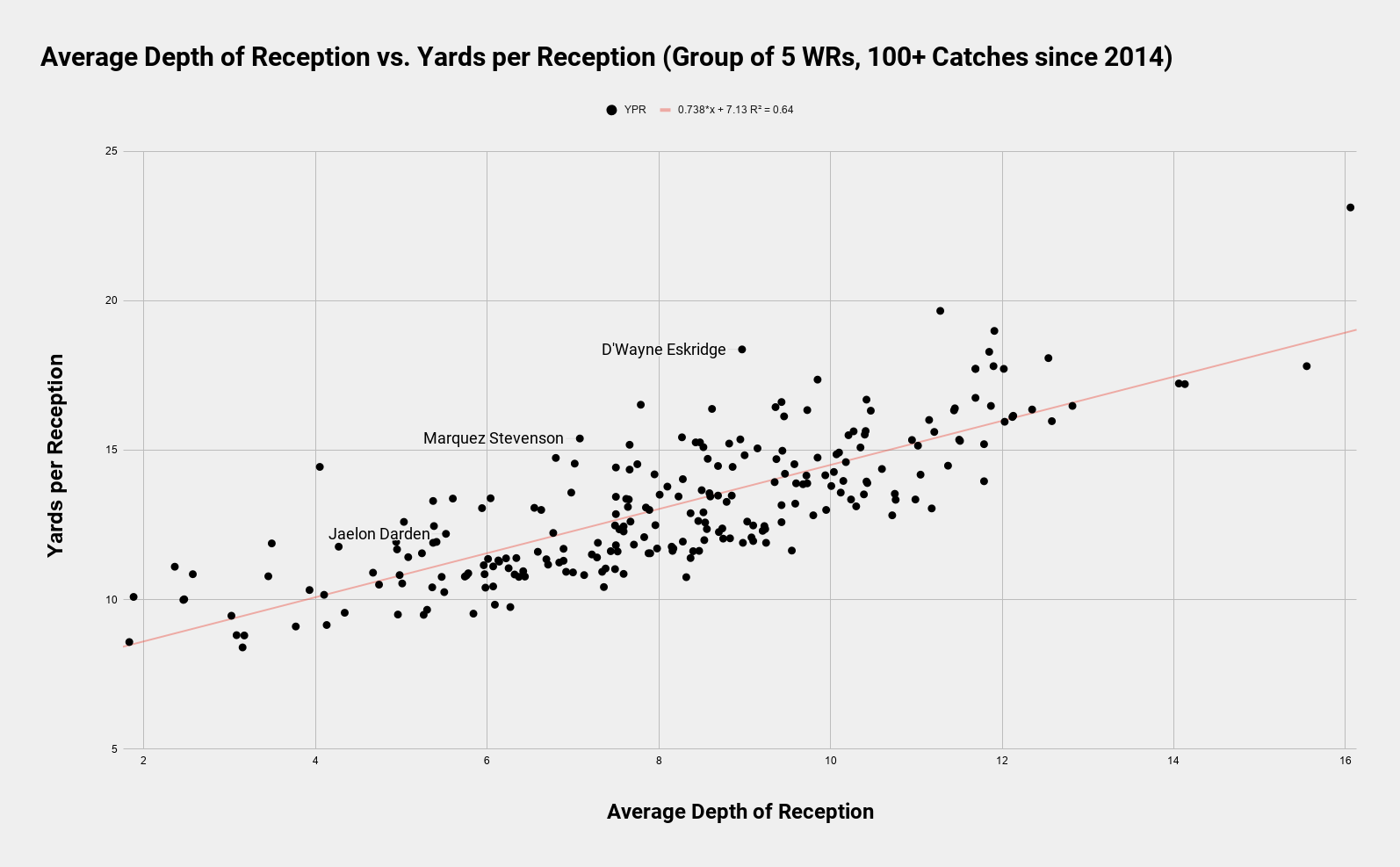 At 5-foot-10 and 180 pounds, Marquez Stevenson recorded an insane 6.46-second three-cone that ranked in the 100th percentile among wideouts at the Houston pro day. His change-of-direction ability shows up after the catch. He averaged a whopping 10.5 yards after the catch per reception in 2019 and ranked highly among fellow Group of 5 wideouts in forced missed tackles per reception. 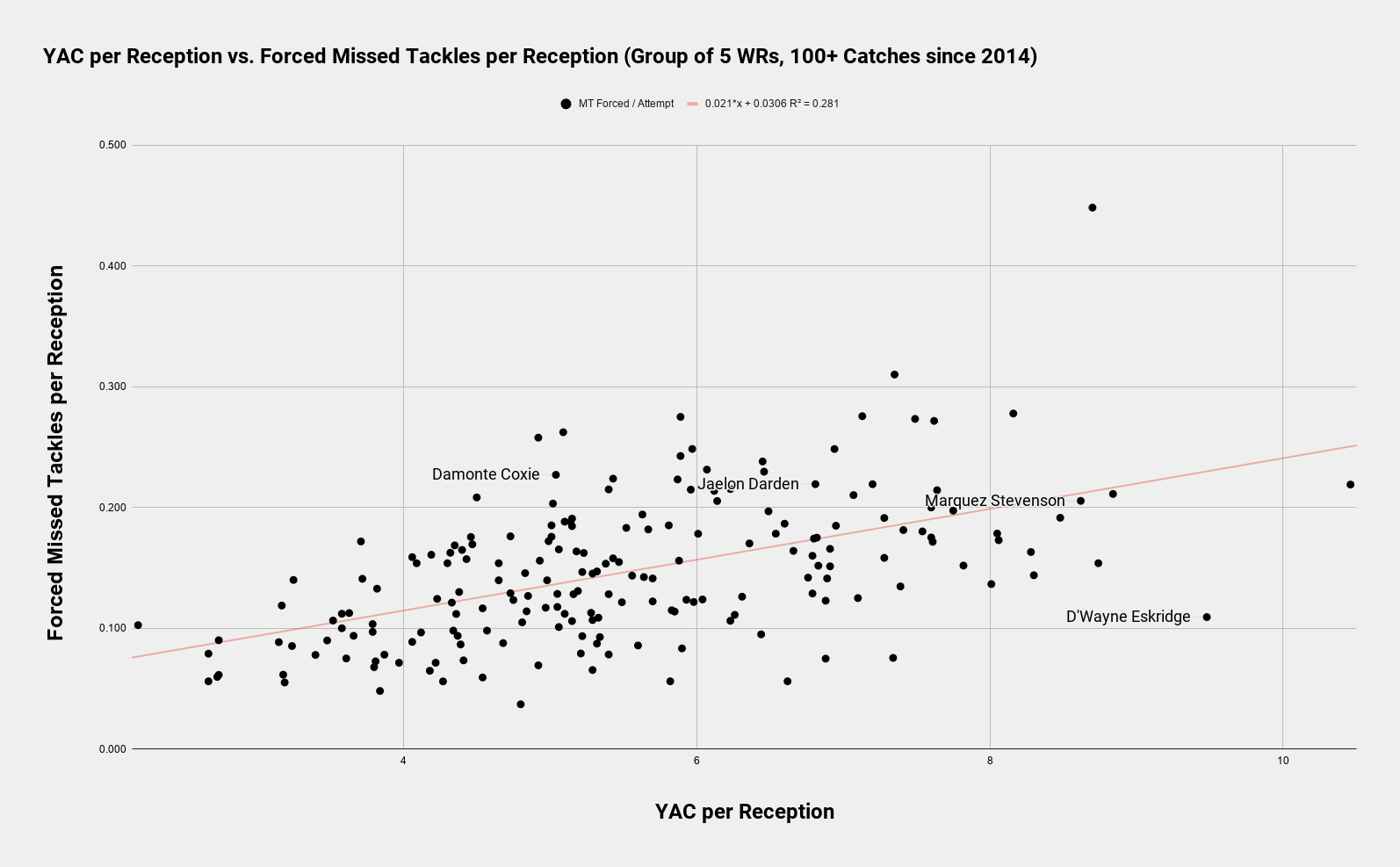 Marquez Stevenson and D’Wayne Eskridge are two of the more productive Group of 5 wide receivers in terms of yards after the catch and forced missed tackles per reception since 2014.