MIAMI, FL - SEPTEMBER 01: Thomas Owens #81 of the FIU Panthers gestures during the game against the Indiana Hoosiers at FIU Stadium on September 1, 2016 in Miami, Florida. (Photo by Rob Foldy/Getty Images)

The college football season has rapidly hit the month of November and multiple positions have seen players rise to the top of their respective draft boards. In 2017, the wide receiver cast of players that may hear their names called next April is an array of next-level talented guys who have played some excellent football this season.

In a way to showcase those players, PFF's Draft Team showcases the draft-eligible leaders in yards per route run, the PFF-exclusive signature stat that sheds a better light on a wide receiver's production on a per snap basis, rather than just lofty receiving yard totals can show. 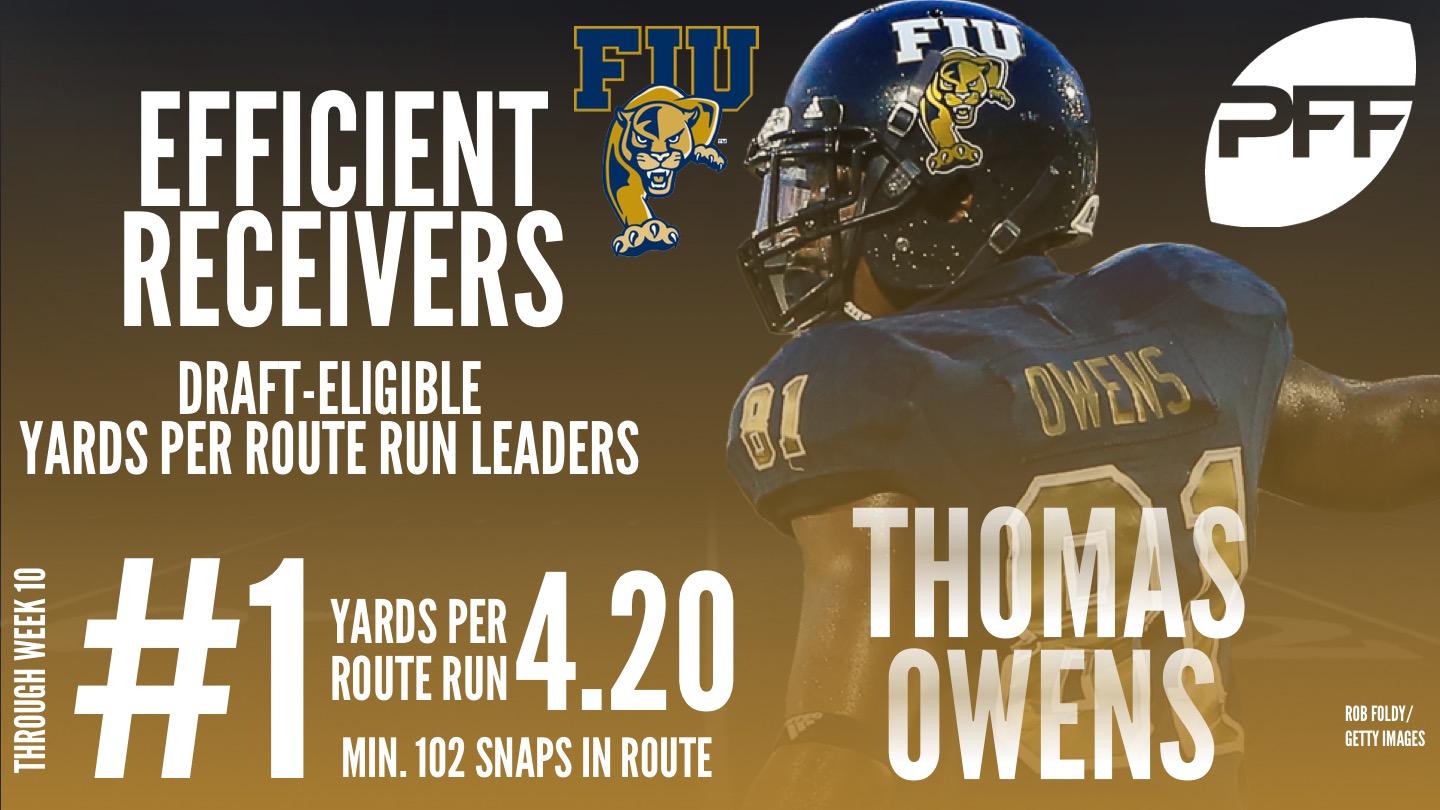 Thomas Owens has been sitting at the top of this list for weeks now and is having the best season of his career. Owens has only been held under 100 receiving yards in three games in 2017. Owens’s most productive game of the season came against Middle Tennessee where he caught 11 of his 13 targets for 162 yards – including 27 yards after the catch – and one touchdown. Owens has been highly productive in 2017 even though Florida International doesn’t get a ton of attention. 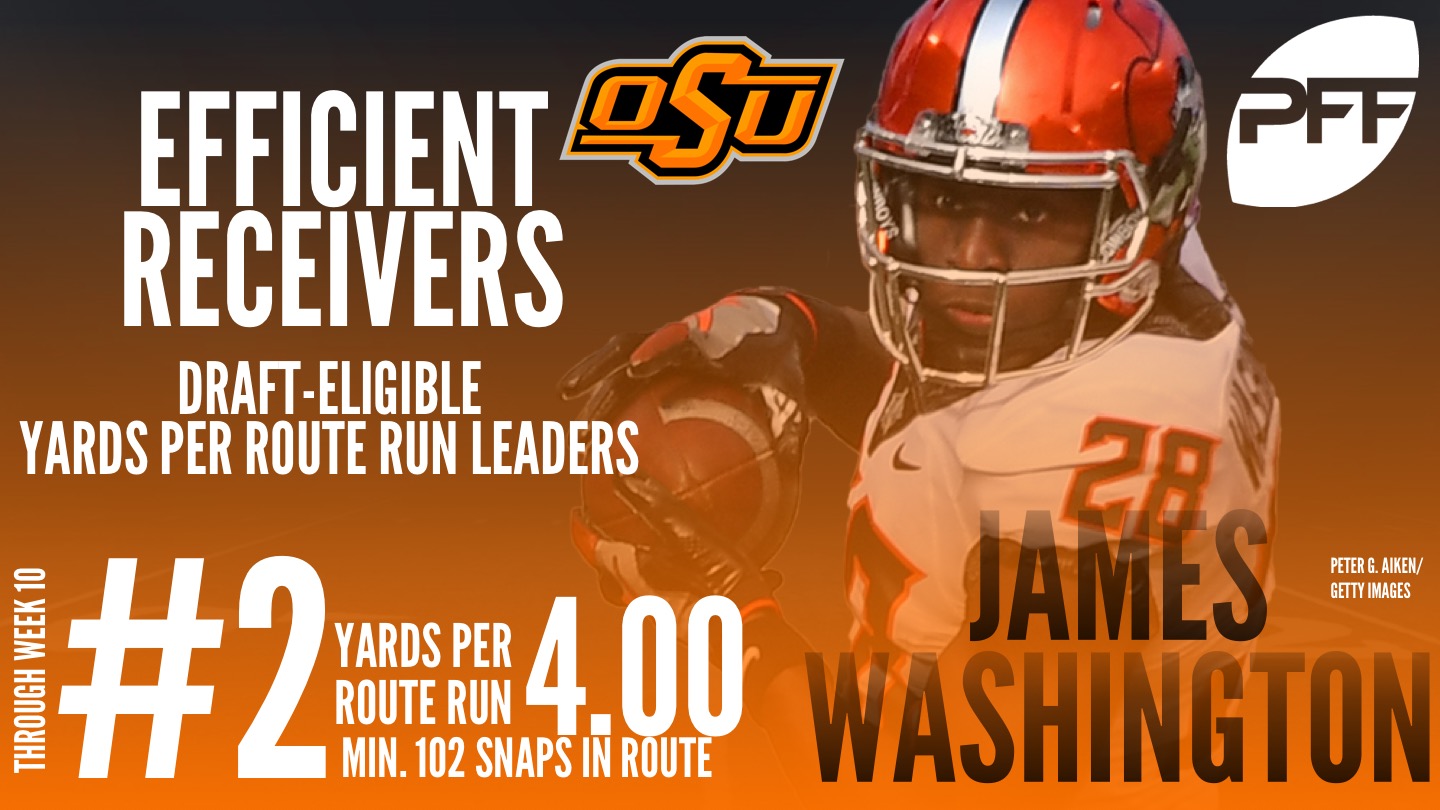 Washington has been one of the top wide receivers in college football for three seasons now and he is having his third-straight 1,000-yard season. Washington is one of the premier deep threat prospect in the draft class and his ability to be productive down the field is why he is so high on this list. Washington’s best game of the 2017 season so far came against Baylor where he caught six of his 11 targets for 235 yards – including 73 yards after the catch – and one touchdown. 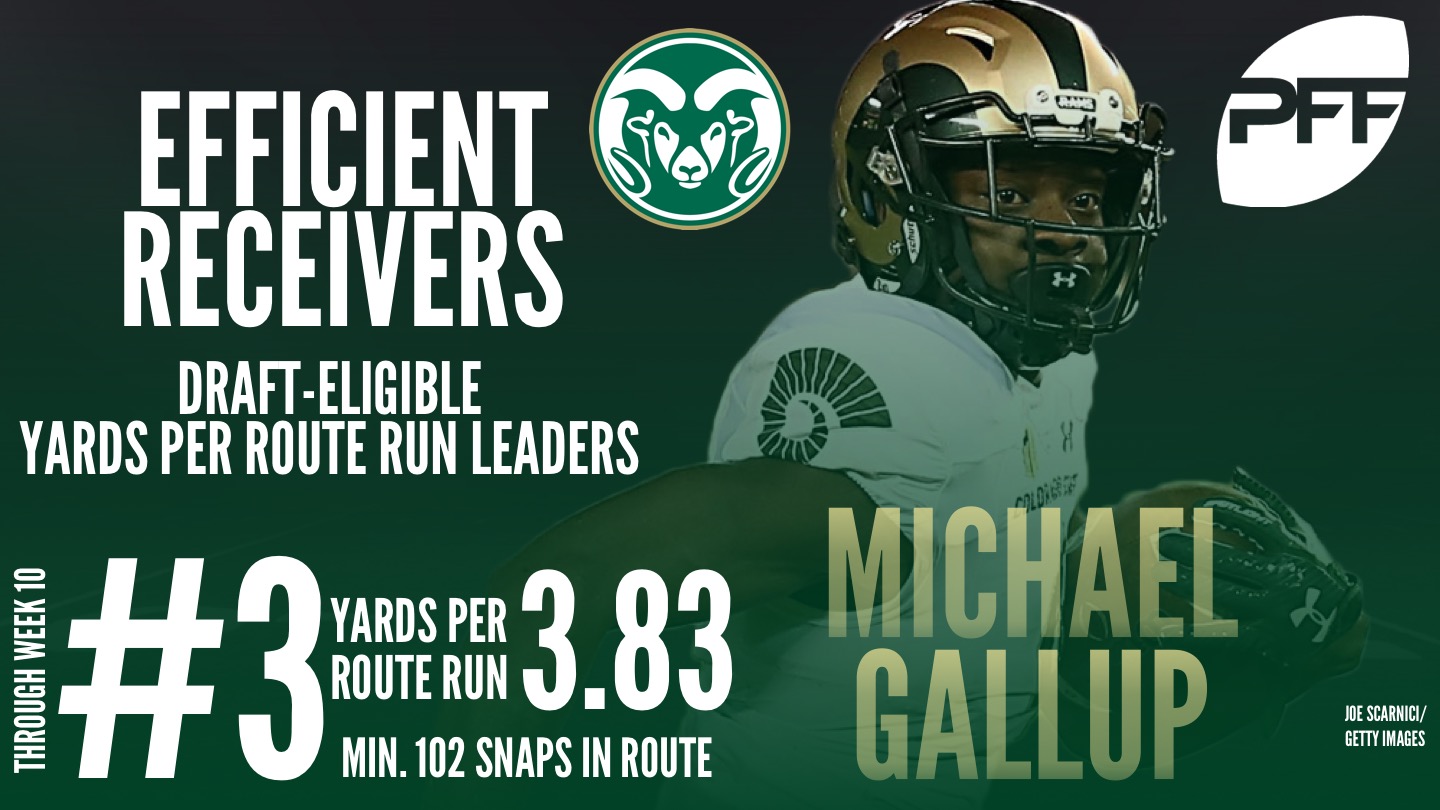 Gallup has shown an ability to separate with quickness and the ability to win at the catch point with strength. Gallup has three games this season with 10 or more catches and has gone over the 200-yard mark in two contests. Gallup’s best game of 2017 came against Nevada where he caught 12-of-15 targets for 263 yards, 97 yards after the catch and three touchdowns while forcing three missed tackles. Gallup’s 93.2 overall grade ranks No. 1 among all draft-eligible wide receivers.

Ursua’s spot on this list is due to his work as a slot receiver. Ursua is averaging 3.58 yards per rote run from the slot which ranks No. 3 among all draft-eligible wide receivers. His best game of the season actually came in the opener against Massachusetts where he caught 12 of his 15 targets for 272 yards – including 192 yards after the catch – and one touchdown while forcing two missed tackles. Ursua had his second positively graded season in a row for Hawaii before knee injury, and his 87.4 overall grade ranks No. 11 among all FBS wide receivers.

Campbell has only played 196 snaps this season but his place on this list shows he’s been highly productive on a per-snap basis. Campbell has done most of his damage stretching short passes into long gains as 361 of his 415 yards have come after the catch and he has forced seven missed tackles. Campbell is averaging 3.51 yards per route run from the slot which ranks No. 5 among all draft-eligible wide receivers. Campbell’s best game of the season came in the opener against Indiana in which he caught seven of his 10 targets for 142 yards – including 136 yards after the catch – one touchdown and forced two missed tackles.

Catch No.'s 6-20 of the rankings with your PFF Edge subscription!