Alabama defensive tackle Quinnen Williams is the crown jewel of this defensive tackle class. He broke the PFF record for single-season grade by a college interior defender in his only season as a starter for the Crimson Tide; he’s head and shoulders above a class that features a ton of talented players. Mississippi State’s Jeffery Simmons and Notre Dame’s Jerry Tillery are the second tier, with positional versatility and production versus both run and pass. The biggest names of all though might be the biggest mystery as Houston’s Ed Oliver and Michigan’s Rashan Gary look like two of the biggest boom-or-bust prospects in this draft. 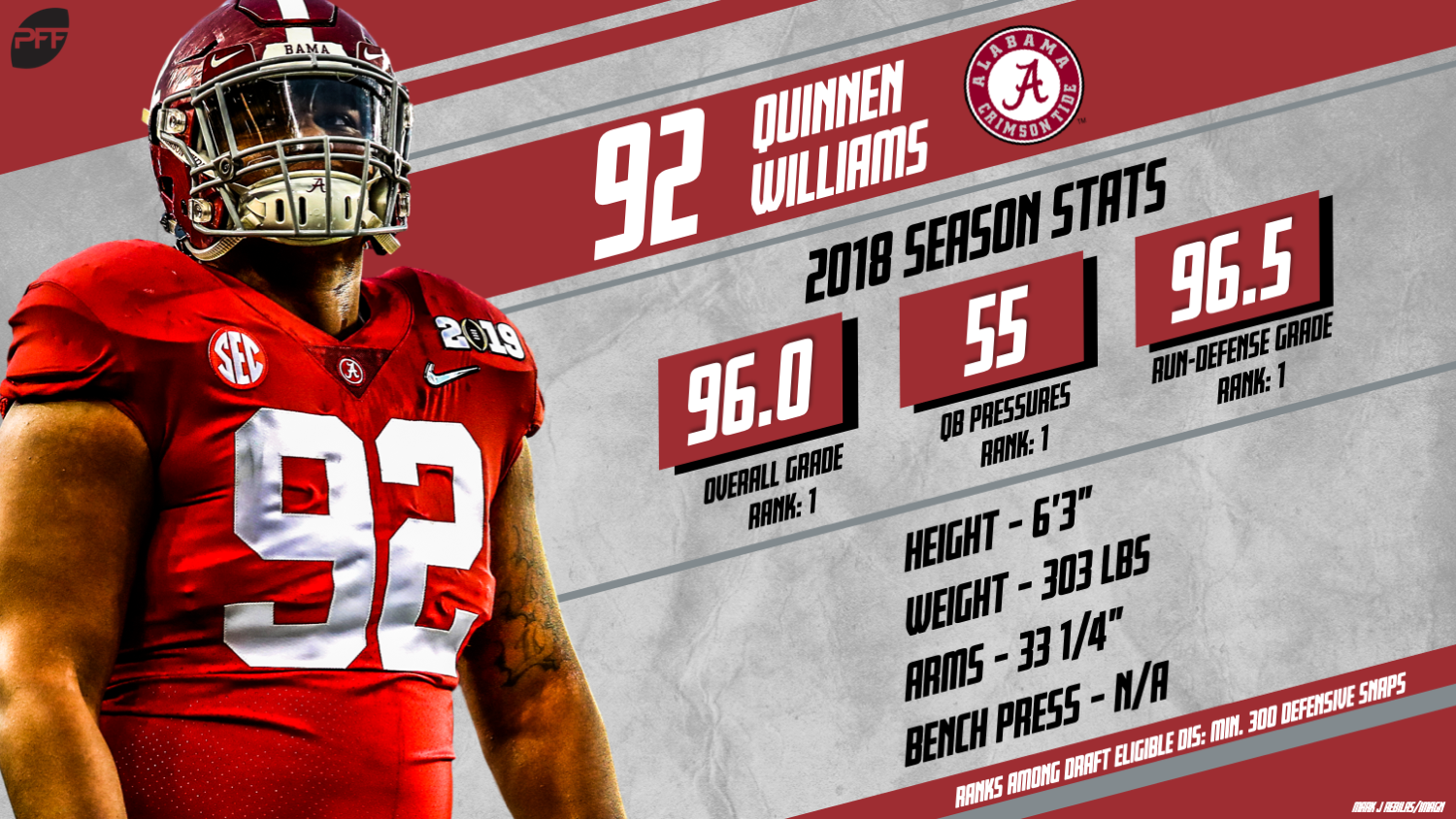 Williams earned the highest grade we've ever given to a college interior defender (96.0) in his lone season as a starter at Alabama.

Tillery tied Quinnen Williams for the highest pass-rushing grade among interior defenders in college football. Tillery's sack totals don't tell the whole story as he was a dominant week in and week out.

Related Article: Jerry Tillery is an elite player, deserves a place in the top-10 conversation

He tore his ACL, but he did it early enough in the process that he could still play as a rookie. Simmons had a run-defense and pass-rushing grade over 90.0 this past season. 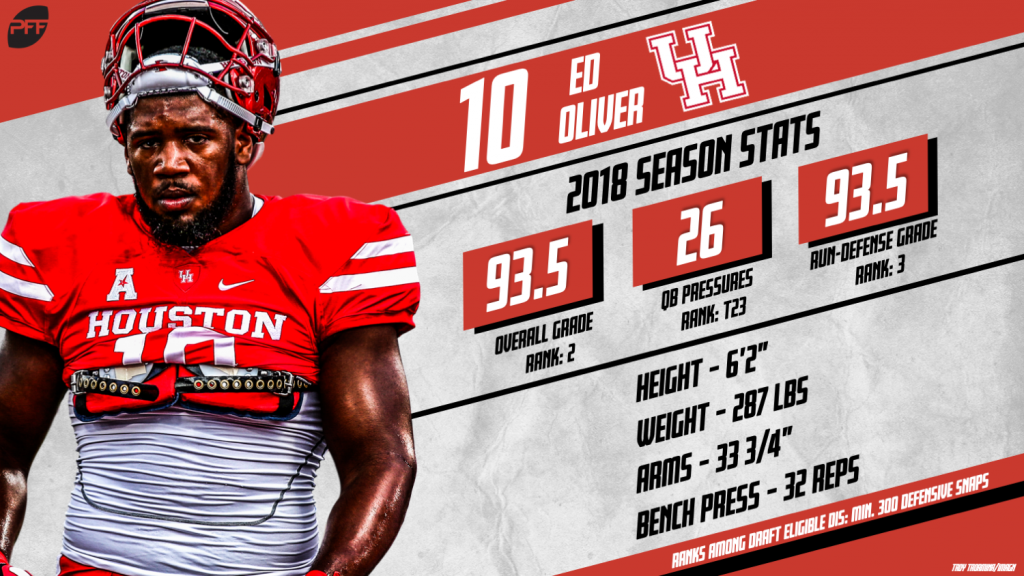 His pass rushing finally came around with a 90.8 grade this past season, but considering his size and the competition he was facing, he still has a ways to go.

Related Article: Did the Houston scheme hold back Ed Oliver?

Nose tackles of 340-plus pounds are going the way of the Dodo in the NFL, but Lawrence is a pretty ridiculous athlete for his size. He had the 12th-best pass-rushing grade among interior players in college football.

Saunders moves like an edge and even played there at times for Western Illinois. He went to the Senior Bowl and had the second-highest win rate among interior players in the one-on-ones. 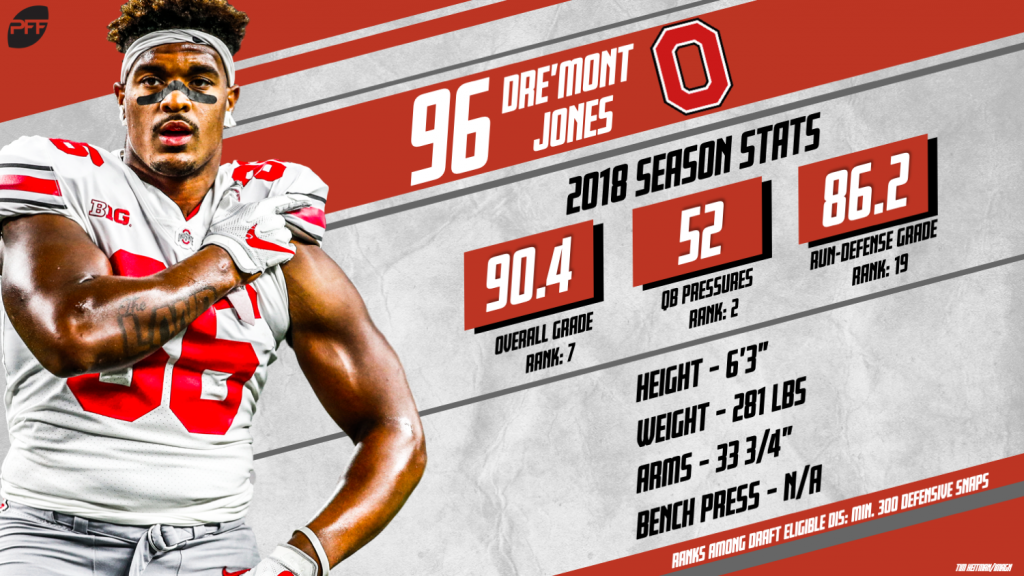 No player in the FBS rushed the passer more than Dre'Mont Jones' 500 snaps this past year. The man simply didn't come off the field and still produced a 90.5 pass-rushing grade.

Gaines was one of the best run defenders in college football but flashed some pass-rushing chops at the Senior Bowl, where he had the third-best win rate among interior players in the one-on-ones.

Keke was played a bit out of position on the edge at A&M and should kick inside in the league. He dominated rushing from the interior at the Senior Bowl with the highest win rate among all DTs. 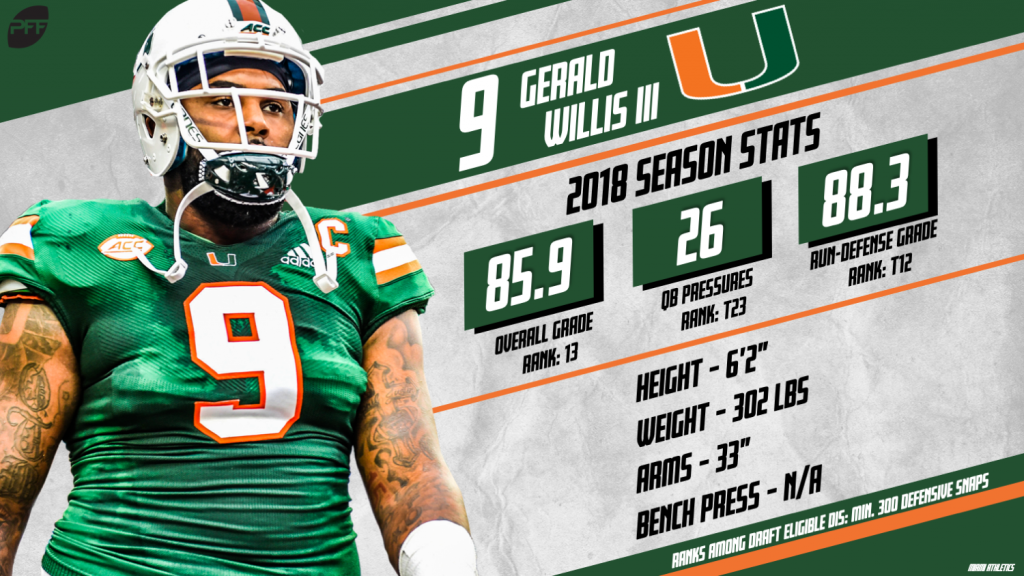 Hill is an explosive athlete with a lot of potential at the next level. He earned 78.7 overall grades in 2017 and 2018 while playing 400-plus defensive snaps in each of the two seasons.

Wren is naturally gifted with great size, explosiveness, and athleticism, but he struggles with consistency. He failed to produce an overall grade above 80.0 once in the last three years of his Arizona State career.