Frank Ragnow – the forgotten superstar of the 2018 NFL Draft

There is one offensive line prospect that is so good in this draft that he unifies everybody in agreement behind his talents: Notre Dame G Quenton Nelson. There is another interior player though that the PFF data suggests is in the same kind of ballpark but being comparatively ignored: Arkansas C Frank Ragnow.

Ragnow is the top center prospect in the draft and while he doesn’t have offensive line gurus drooling over themselves the way Nelson does, he has posted similar PFF grades over his time at Arkansas.

Nelson has three straight seasons with an overall PFF grade north of 85.0, and checked in at 95.1 this past season, improving every year of his college career. He is a consensus top-10 pick in this draft and a player good enough that the questions center around ‘just how high can you actually take a guard?’ rather than his overall ability. 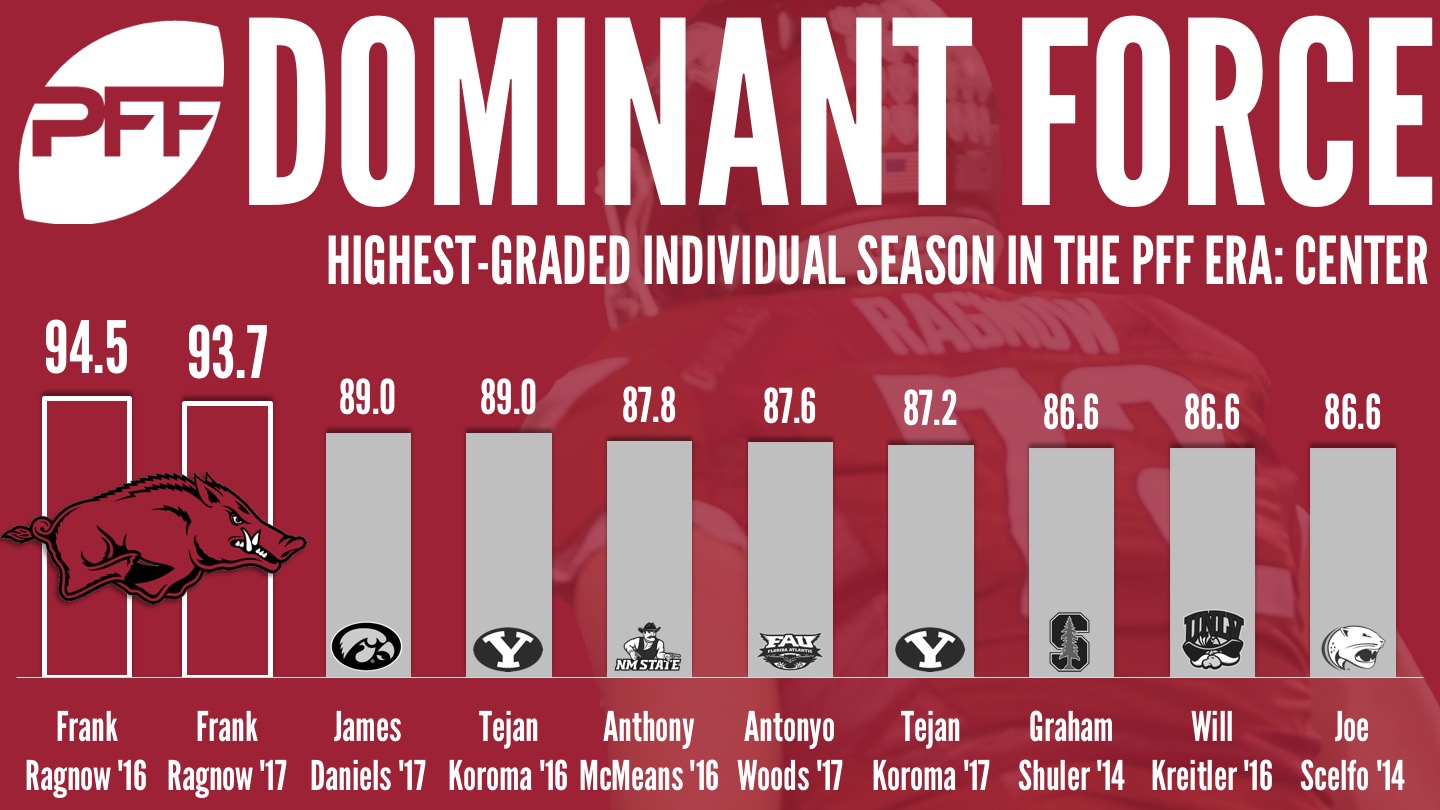 Ragnow may not be able to match Nelson’s 2017 grade, but he has back-to-back seasons with a mark of 93.7 or better. In fact, those back-to-back seasons represent the two highest graded seasons for a center in the four years PFF has graded every game of college at the FBS level.

Centers surrender fewer pressures on the quarterback than any other position along the line, but it remains notable that Ragnow didn’t surrender a sack in his entire college career. Four seasons, spanning 2,603 snaps resulted in just 35 total pressures and no sacks. This past season he surrendered just one single hurry when playing center and two more at right guard for a total of three on the season before injury shut him down for the year. 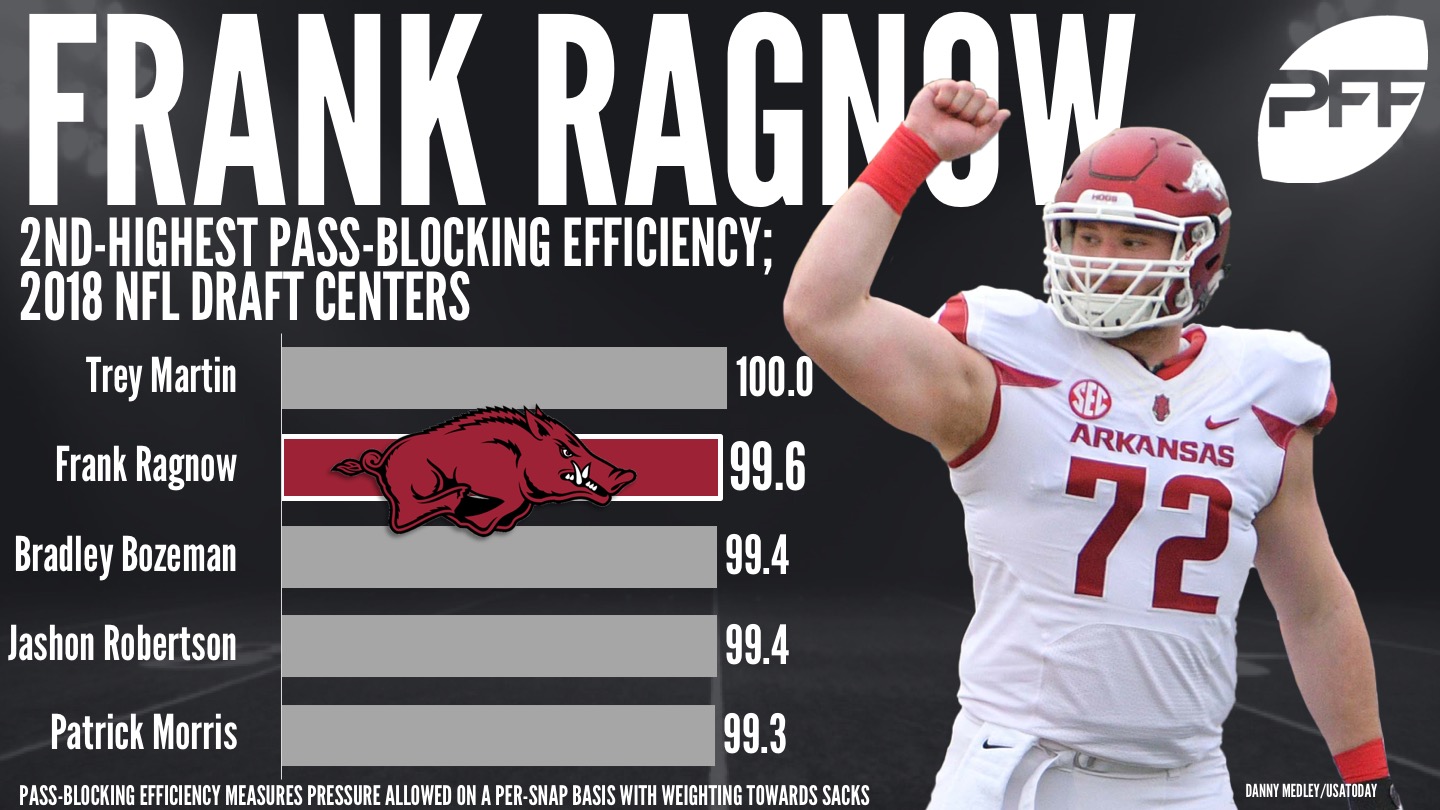 Ragnow’s pass-blocking has been good, and that is evident from the pressure totals, but his run-blocking is what catapults him into the upper echelon of draft prospects.

In the run game, Ragnow may not bury people into the dirt the way Nelson does, but he doesn’t lose, and he usually wins – and those aren’t opposite sides of the same statement. There are many plays in a game where a blocker neither wins nor loses, but rather holds station against a defensive lineman. With run defense being all about gap control, on certain plays the blocker and defender are both happy with controlling the same gap, and those are the plays that earn PFF’s ‘expected’ 0.0 grades. When I say Ragnow both wins and doesn’t lose, it’s that he has a high percentage of positive plays beyond those expected plays and a low percentage of negatives.

He's also exceptional on the move. Finds this guy and seals him back inside to buy the RB space towards the sideline: pic.twitter.com/sf4Tkjheyh

While Nelson embodies the nasty, dominant finishing and raw power that many people look for in offensive line prospects, Ragnow more typifies the player that just gets the job done, regardless of how pretty it looks.

Frank Ragnow should be every bit a first round pick at center in this draft. It doesn't look as pretty as Quenton Nelson, but it's pretty much as effective. Say bye bye linebacker: pic.twitter.com/CL65QVoKht

Ultimately, there are no bonus points for style and if a player is able to consistently succeed, you need to question just how important it is that it looks pretty from snap to finish. Ragnow is able to consistently perform regardless of competition level and had one of his strongest games of the year against Alabama’s formidable defensive front playing out of position at guard last season.

One of the X-factors surrounding offensive line prospects in the draft is always what degree of position flexibility they bring with them. Ragnow has experience playing guard at Arkansas, and when he has been asked to moonlight there his grades were just as strong as they were inside anchoring the line at center. If a team wanted to install Ragnow at guard early in his career rather than entrust him with the line calls from Day 1, he would likely more than hold his own in that spot.

We are currently diving into some of the data to try and evaluate just how predictive PFF grades are at projecting performance at the next level, now that we have four complete seasons of college grading and three seasons of translating to the NFL. While there are multiple variables at play, one of the most consistent themes across positions is that the players that truly dominate and separate themselves at the top of the PFF grades in college have a very strong likelihood of succeeding at the NFL level. Nelson clearly fits that billing and was the best-graded guard in the nation in 2017, but Ragnow is right there as well, based off the performances we saw from him in 2016 and 2017.

There are things to dislike about Ragnow's tape, but a critical point is what happens immediately after those things, and the fact is that in multiple years of play they have never actually posed a problem. His detractors among the scouting community are banking on a problem suddenly developing based on no more evidence than the fact it is unusual for someone to dominate with that technique. The bottom line at PFF is that we'll believe it's a problem as soon as it actually becomes a problem.

Ragnow's performance is spectacular when you watch and grade every play he takes part in. It’s time we started talking about him as a first-round draft pick, and began asking not whether he belongs in that round but just how high in it he should be taken?