While Pro Football Focus will be in attendance at the Senior Bowl, there are two other noteworthy all-star games for 2018 NFL draft prospects to be mindful of, and we've got you covered.

From the East-West Shrine game in St. Petersburg to the NFLPA Collegiate Bowl in Pasadena, some top-level talent will be on display for NFL scouts and fans alike. Which of these players should you know about come draft day in April?

Here are but some of the top prospects to keep an eye on in both games: 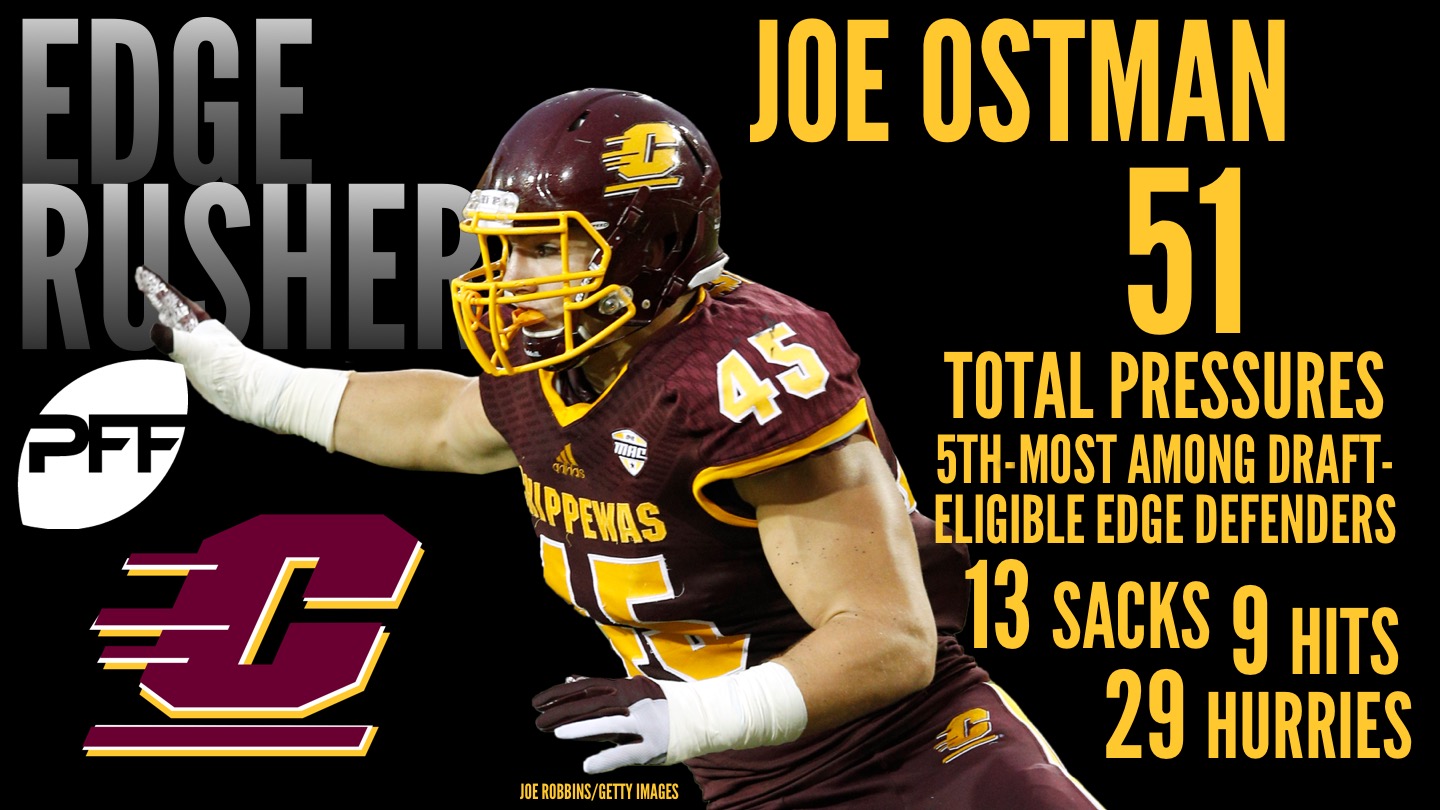 Justin Lawler repeatedly turned in monstrous performance after monstrous performance for the Mustangs’ defense in 2017. Lawler finished the season with nine sacks, 12 QB hits and 35 hurries on his 356 pass-rushing snaps. He also had 29 run stops, which ranked No. 6 among all FBS draft-eligible 4-3 defensive ends. Lawler has graded positively as a run-defender and as a pass-rusher for the last three seasons and has seen his sack and QB hit totals increase every year of his career. 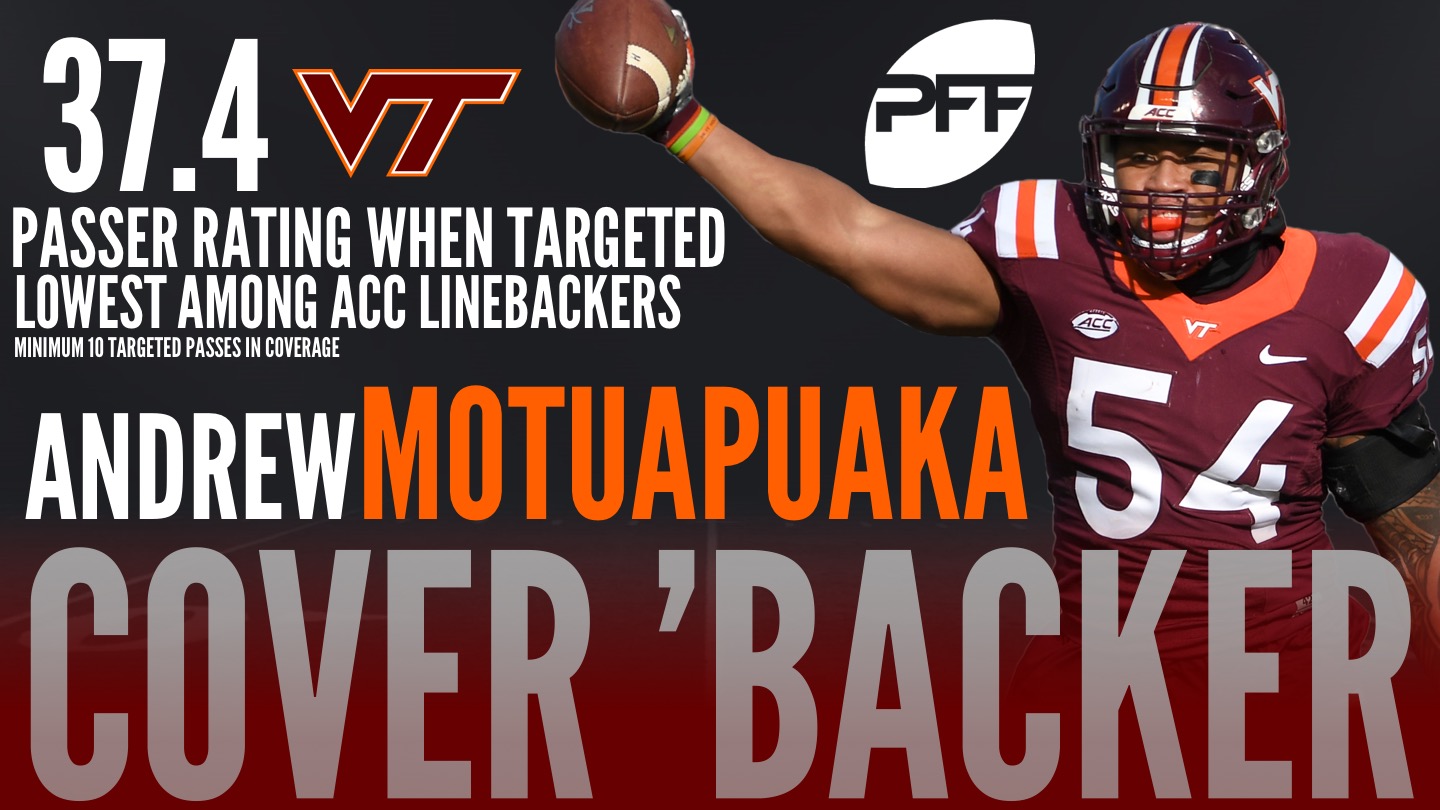 Andrew Motuapuaka had the best season of his career in 2017 and proved himself to be a three-tool linebacker, as he graded positively as a run-defender, pass-rusher and in coverage. Motuapuaka had 35 run stops in addition to two sacks, four QB hits and seven hurries as a pass-rusher. However, he was at his best as a coverage defender and only allowed one catch for every 43.6 snaps in coverage, which ranked No. 1 among all FBS draft-eligible linebackers. Motuapuaka only gave up eight catches for 84 yards with no touchdowns and one interception.

Tarvarius Moore spent most of the season at or near the top of our highest-graded safeties list, and his final overall grade of 88.6 ranks No. 2 among all FBS safeties after only Florida State's Derwin James. Moore played 88.2 percent of snaps within eight yards of the line of scrimmage and was highly effective as a run-defender. His 21 run stops tied him at No. 10 among all FBS draft-eligible safeties. Moore only gave up one touchdown in coverage in 2017 and that didn’t come until the bowl game against Florida State. He also intercepted three passes and broke up another six, and opposing quarterbacks only had a 52.7 passer rating when throwing into his coverage.

Dejon Allen played both guard and tackle during his career at Hawaii but played left tackle in 2017. We projected in October that NFL teams would likely ask him to play inside at guard, and he has been initially listed as a guard on the Shrine Game roster. Allen improved each season as a pass-blocker and only allowed one sack, two QB hits and six hurries on his 399 pass-blocking reps while his pass-blocking efficiency rating of 98.2 tied him at No. 12 among all FBS draft-eligible offensive tackles. Keep an eye on Allen’s adjustment back inside to guard during practices and the game.

Cody O’Connell is hard to miss at 6-foot-8, and he's coming off back-to-back years with outstanding production as a pass protector. In 2017, O’Connell only allowed one sack, two QB hits and seven hurries on his whopping 759 pass-blocking snaps. That number is an incredibly large body of work, and his pass-blocking efficiency rating of 99.0 tied him at No. 5 among all FBS draft-eligible guards. In 2016, O’Connell also only surrendered a single sack on the season on his way to being named a 2016 PFF First Team All-American. 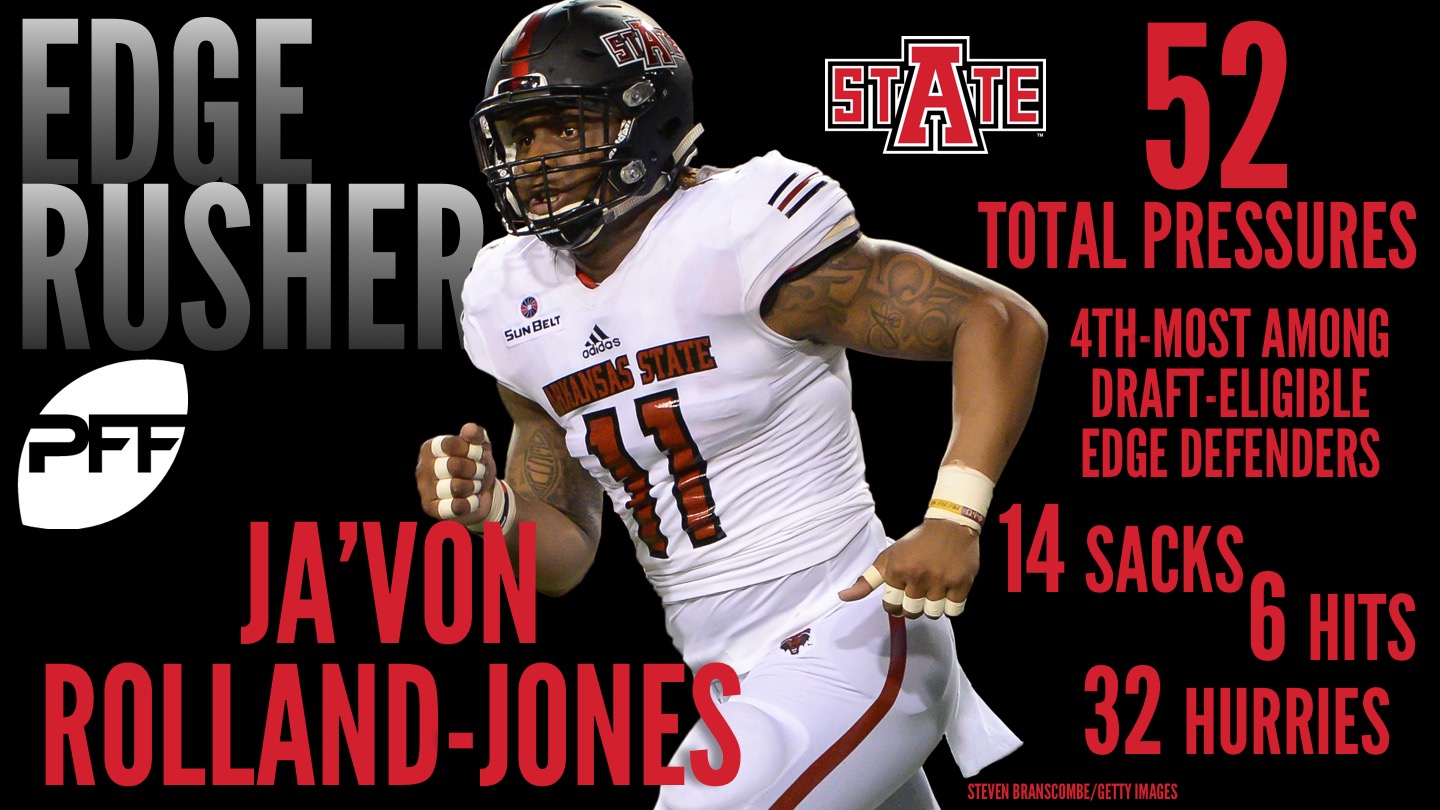 Ja’Von Rolland Jones isn’t the biggest or the fastest edge-rusher, but he’s been one of the most productive in all of college football for the last four years. Rolland-Jones is a rare college pass-rusher who actually had more than 10 sacks per season for four straight years. He has racked up a career total of 53 sacks, 30 QB hits and 112 hurries for Arkansas State. His 2017 campaign was no different, as he had 14 sacks, six QB hits and 32 hurries on his 347 pass-rushing snaps. Rolland-Jones also contributed 20 run stops, proving he’s not just a pass-rusher. 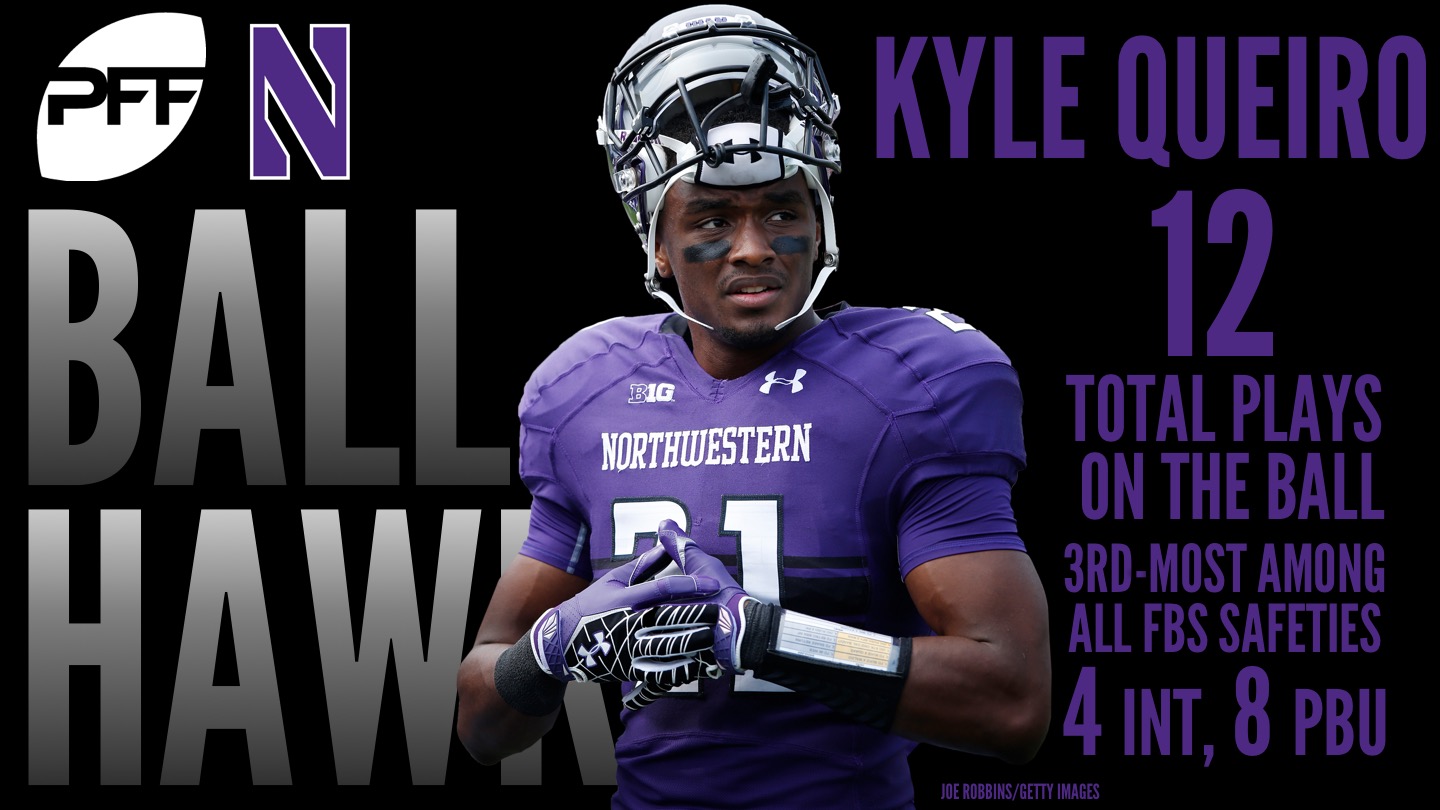 Kyle Queiro has posted impressive numbers against the run and in coverage for two straight seasons. He is the type of player who can make plays on the ball and get it back for his team. Queiro had 13 plays on the ball in 2017 – five interceptions and eight passes broken up – and another two interceptions and four passes broken up in 2016. Queiro played over 300 of his snaps in the slot, and opposing quarterbacks only had a 44.5 passer rating when throwing into his slot coverage. 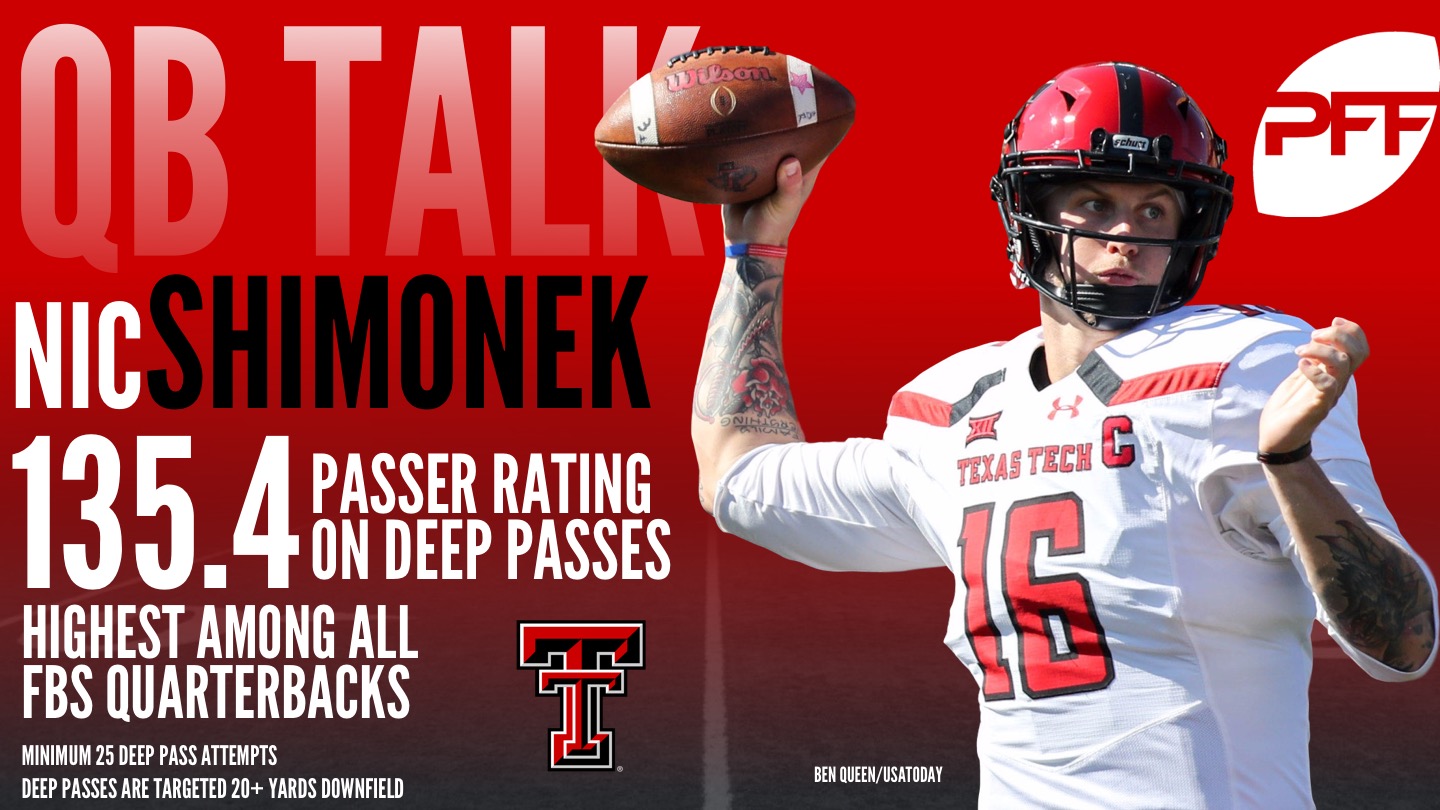 Nic Shimonek only started one year for the Red Raiders, as that roster spot was previously held by top-10 pick Patrick Mahomes. Shimonek was super productive and highly accurate during his time in the spotlight, as his adjusted completion percentage of 76.6 ranked No. 6 among all FBS draft-eligible quarterbacks. The Texas Tech offense does call for a large volume of short passes, but Shimonek was accurate pushing the ball down the field as well. He completed 27 of his 54 deep passes – targeted 20 or more yards downfield – for 1,049 yards, 13 touchdowns and no interceptions. Shimonek’s adjusted completion percentage of 55.6 on deep passes ranked No. 2 among all FBS draft-eligible quarterbacks.

Poona Ford only stands 5-foot-11, but he uses his lack of size and quickness to beat blockers almost immediately after the snap. Ford is a very disruptive defensive lineman who makes his impact felt on the offense's side of the line of scrimmage. He has graded positively as a run-defender for four consecutive seasons and in 2017, Ford’s run-stop percentage of 8.3 ranked No. 19 among draft-eligible FBS defensive tackles with at least 200 run-defense snaps. Ford also contributed three sacks, one QB hit and 12 hurries on his 284 pass-rushing snaps.

Deatrick Nichols has been solid for USF and has graded positively as a run defender and in coverage for three straight seasons. Nichols lined up all over the field for the Bulls, seeing time at both outside corner spots, in the slot and even some safety. When Nichols was lined up in the slot in 2017, he only surrendered 23 catches for 192 yards and no touchdowns. Also, opposing quarterbacks only had a passer rating of 58.2 when throwing his way, which ranked No. 25 among all FBS draft-eligible cornerbacks. Cornerbacks who excel in slot coverage have never been more valuable in the NFL than now, so Nichols and his skillset are heading to the NFL at the right time. 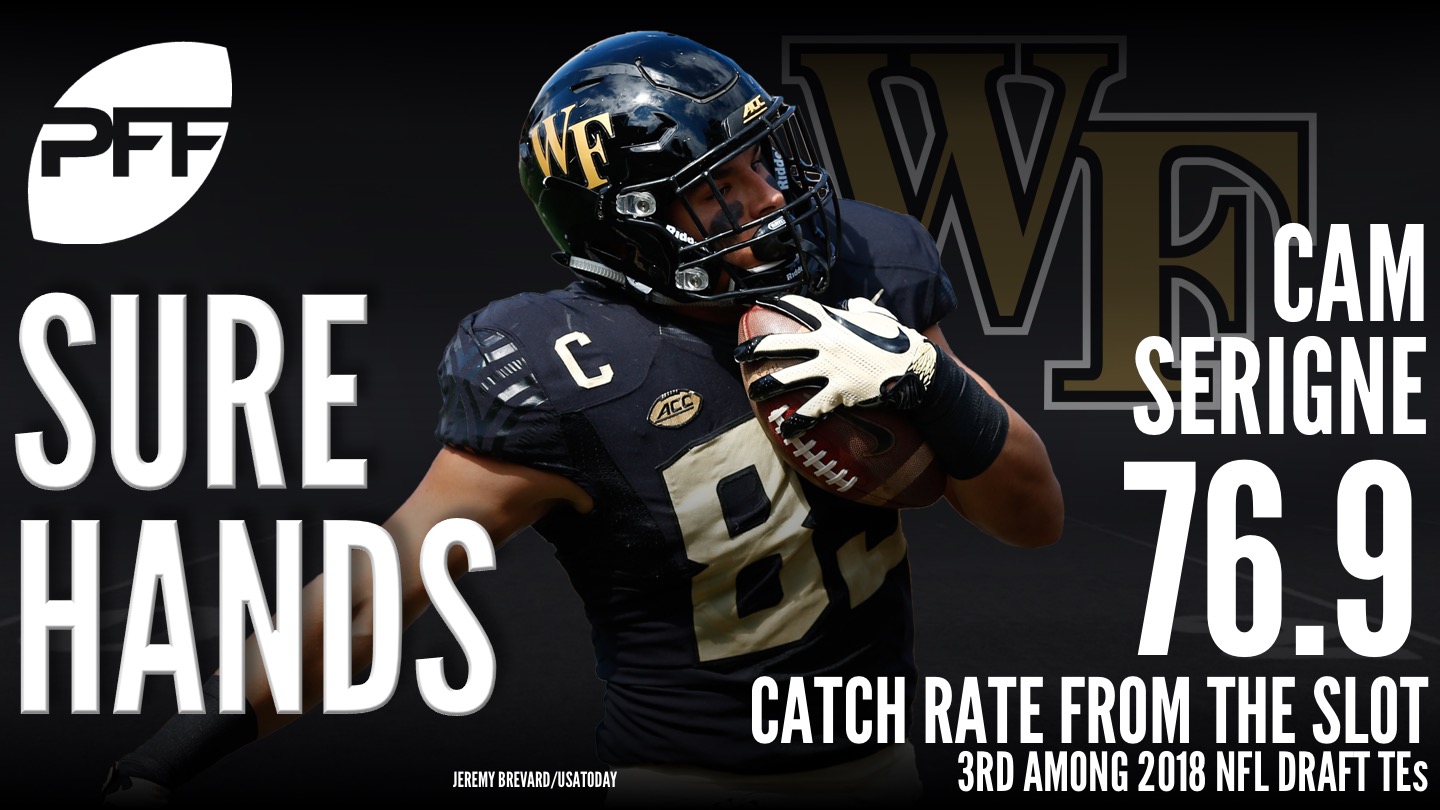 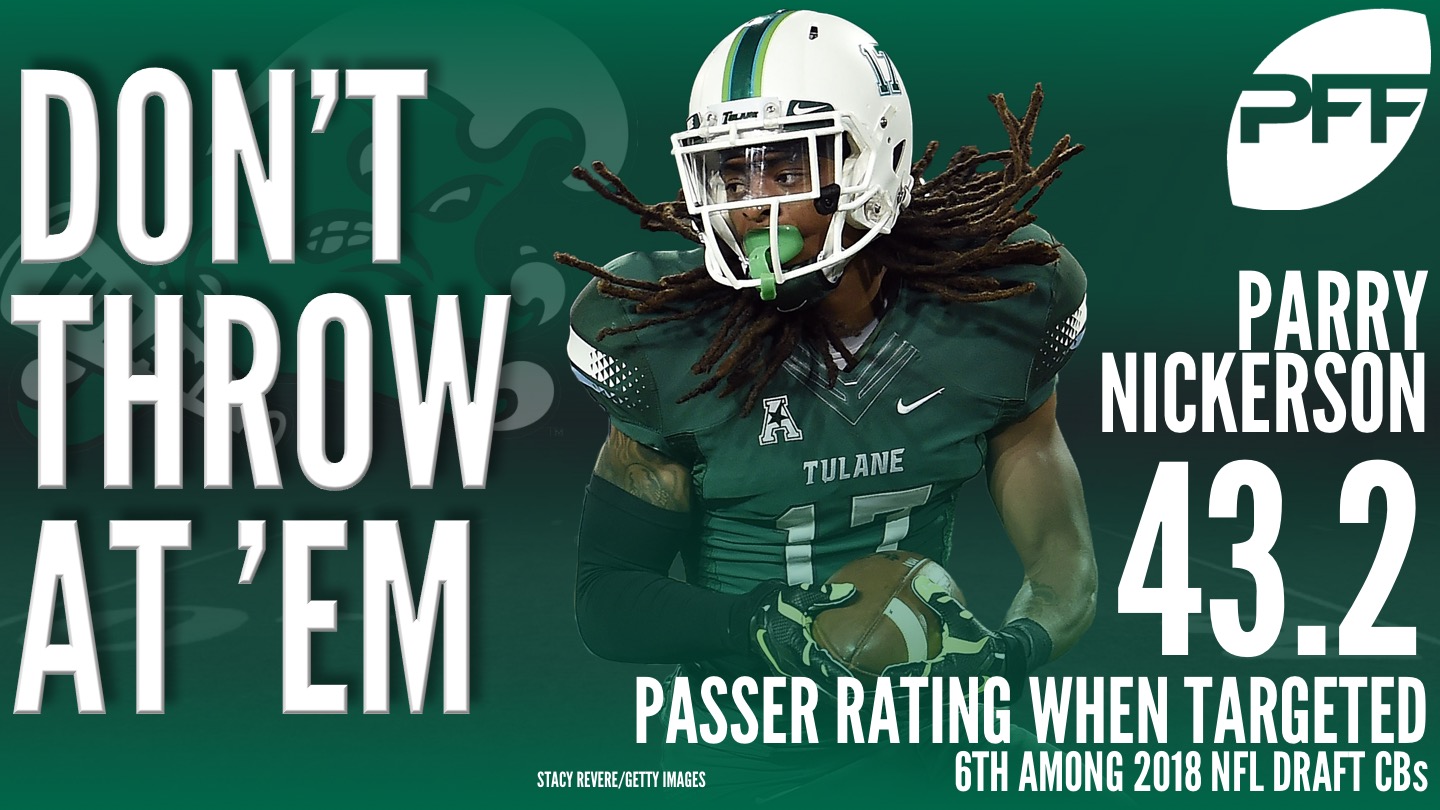 Parry Nickerson is undersized by NFL standards, but he should stand out on defense during the NFLPA Bowl as he caps off a dominant two-year stretch in coverage. In the last two seasons combined, Parry only allowed two touchdowns but collected 10 interceptions and 11 passes broken up. Opposing quarterbacks had a 43.2 passer rating when throwing into Nickerson’s coverage in 2017 and only 32.5 in 2016. His ability to make plays on the ball will intrigue NFL teams, and his six interceptions this season ranked him No. 2 behind only Iowa’s Josh Jackson among all FBS draft-eligible cornerbacks.

Dalyn Dawkins can run by people, but he also runs angry and delivers a blow on contact, traits that can see him fall forward for extra yards at the tackler's expense as he ran for 3.29 yards after contact per attempt in 2017. Dawkins forced 50 missed tackles as a runner in 2017, which tied him at No. 5 among all FBS draft-eligible running backs. He can also be a factor in the passing game, and his 1.24 yards per route run ranked No. 25 among all FBS draft-eligible running backs.

Greg Stroman was a playmaker both in coverage and on special teams for the Hokies. He only surrendered 13 catches for 250 yards and two touchdowns in 2017 while he also intercepted four passes and broke up another 10 passes. Opposing quarterbacks only had a passer rating of 28.0 when throwing into his coverage. Stroman is also an instinctive and explosive punt returner,  returning two punts for touchdowns in 2017 and logging four punt return touchdowns over his career. Stroman’s combination of plays on the ball in coverage and big punt return ability should make him very attractive to NFL teams. 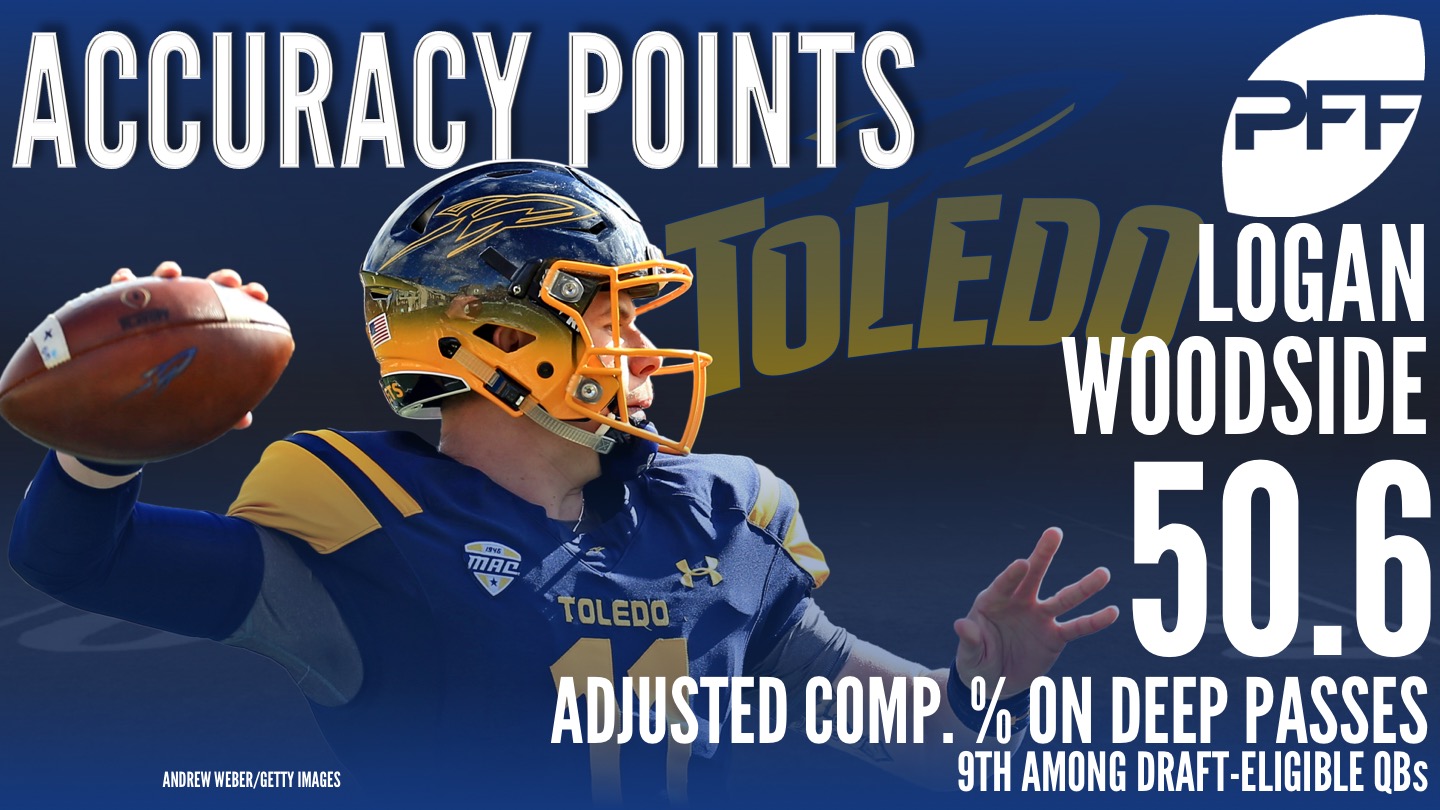 Phillip Lindsay might be small at only 5-foot-7, 190-pounds, but he makes up for his lack of size with production and physicality. Lindsay forced 47 missed tackles as a runner, which ranked No. 6 among all FBS draft-eligible running backs. He is also a sure-handed receiving threat that only dropped four passes in his four years at Colorado. In the NFL, running backs are seemingly only allowed on the field on third down if they can pass protect, and Lindsay is a nasty, effective pass-protector. His pass-blocking efficiency rating of 96.5 ranked No. 7 among all FBS draft-eligible running backs with at least 100 pass-block snaps – truly indicative of the fact that he can be a third-down back in the NFL.