While everyone focuses on the arms race in the AFC West, the AFC East is one of the most intriguing divisions in football this year.

The division has some early picks courtesy of the New York Jets in the 2022 NFL Draft that could set the tone for the entire draft league-wide. The Miami Dolphins finally ponied up and traded some draft capital for a bonafide superstar, leaving themselves with just one selection in the top three rounds. The New England Patriots still have a pick in each round while the Buffalo Bills look to continue on their path of excellence as everyone chases them for the AFC East crown.

With that in mind, let's dive into a three-round mock draft for each AFC East team. 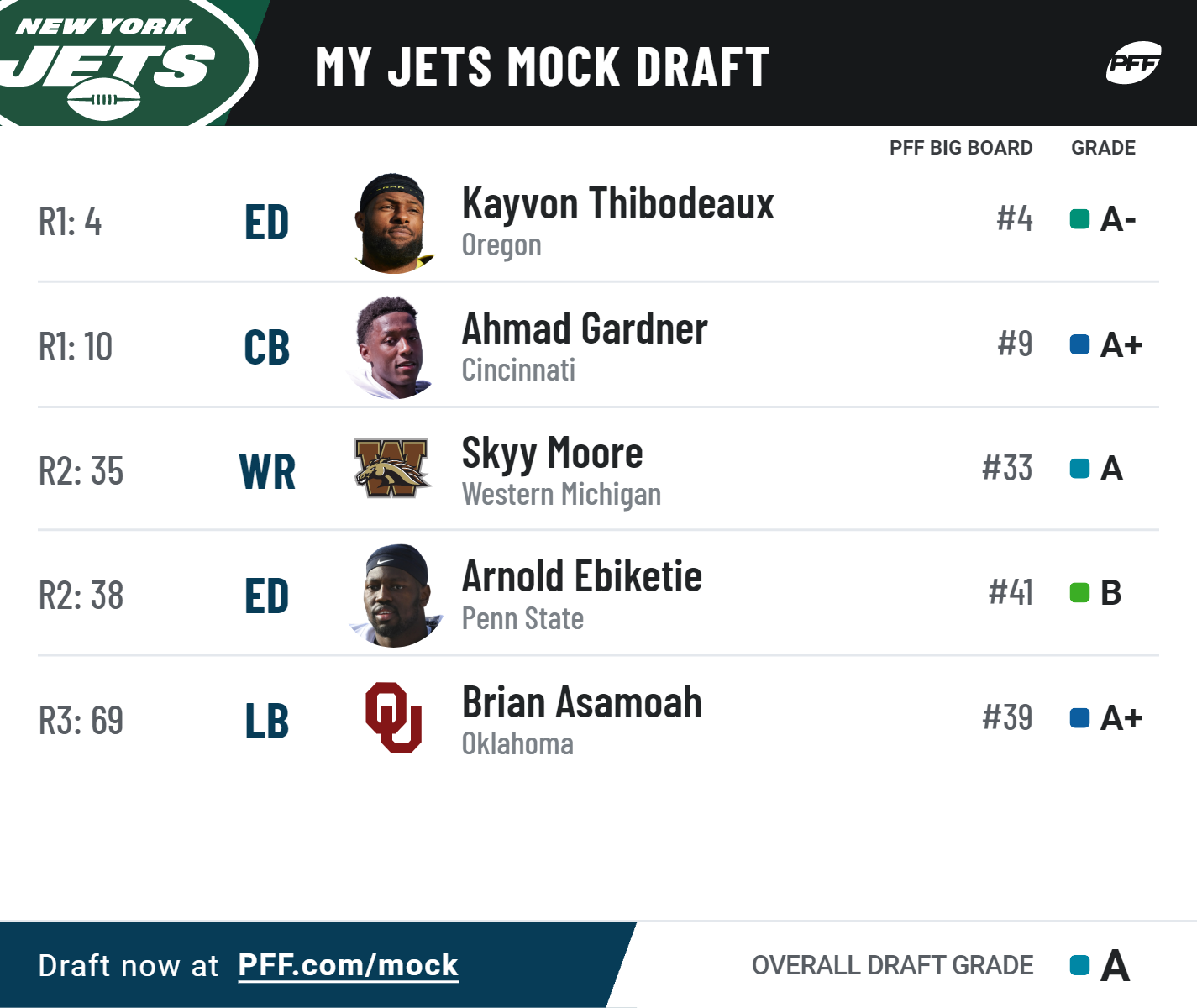 With Aidan Hutchinson, Kyle Hamilton and Derek Stingley Jr. off the board, the Jets take Kayvon Thibodeaux with the first of their two top-10 picks.

As long as the Jets don’t panic when the first three players come off the board, they will be fine. They can’t go wrong, as an elite prospect will be available at any position they could target. In this scenario, they take the edge rusher and pass on the three Tier 1 tackles in the class. The Jets could target an offensive tackle instead but that position isn't as big of a need as edge defender or even cornerback.

If the team misses out on Stingley as they do here, Ahmad Gardner would be a great consolation prize pick No. 10. Gardner has the size and the measurables teams covet — his 40-yard dash finished in the 80th percentile among cornerbacks, his hand size was in the 88th percentile and, maybe most importantly, his arm length was in the 99th percentile. He’s a physical press man-to-man cornerback whose production is off the charts. His 86.0 coverage grade while in single coverage ranked in the 92nd percentile among all cornerbacks in the PFF College era.

After the first round, the team continues to address areas of need by selecting wide receiver Skyy Moore and edge defender Arnold Ebiketie. The Penn State pass-rusher is possibly the best Tier 2 edge rusher in the class so getting him at 38th overall would be a steal, as his deep pass-rush repertoire paired with excellent production make Ebiketie a Day 1 starter. Moore adds some speed on the outside to the receiving corps. Even though he’s just 5-foot-10, he has massive 12-inch hands.

Finally, Brian Asamoah fell to the Jets in the third round. The Oklahoma Sooner is not the biggest player (6-foot-1 and 226 pounds), but his first step is quick in addition to his impressive overall athleticism. 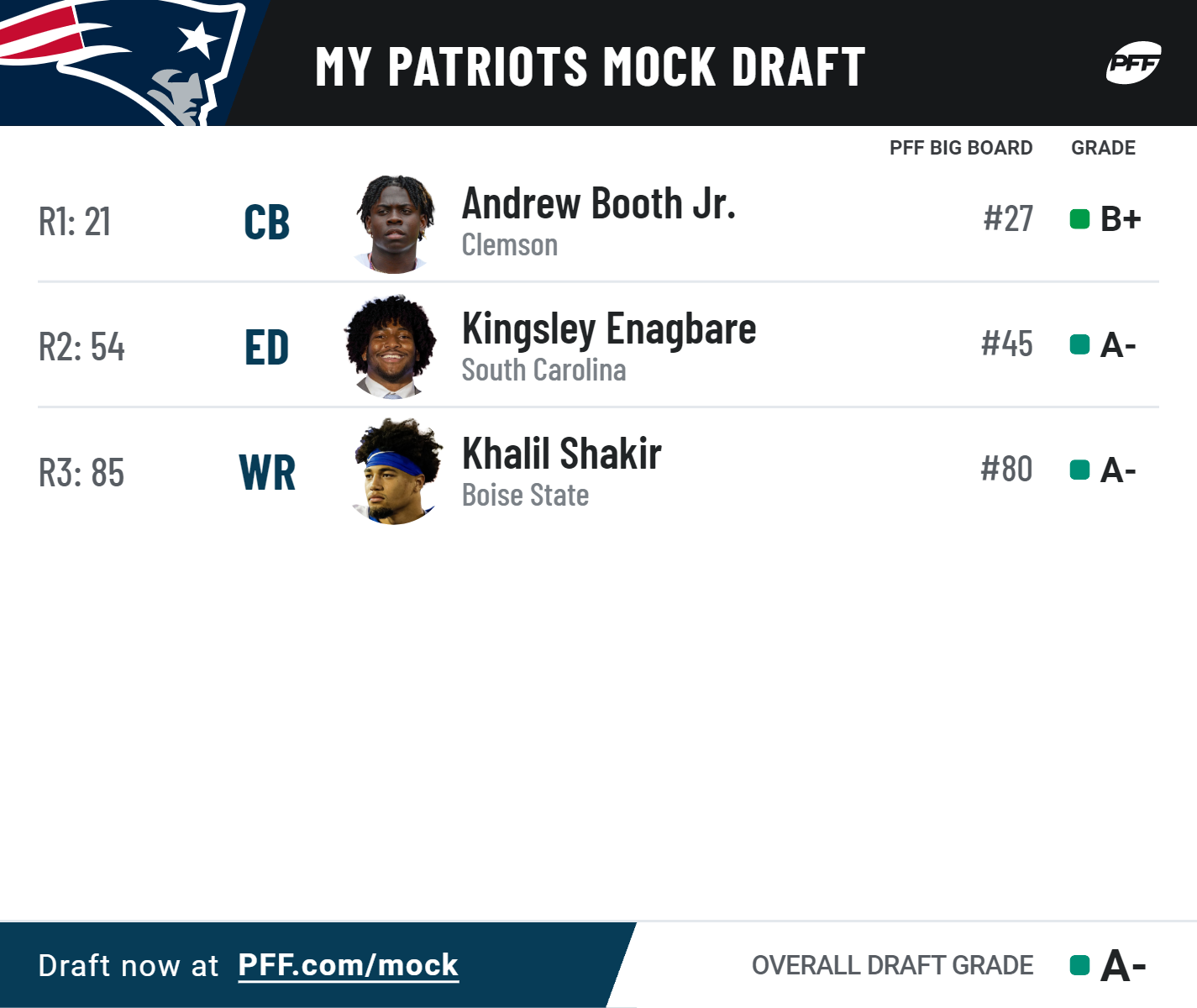 The Patriots come into this draft wounded at cornerback after trading Stephon Gilmore midseason and losing J.C. Jackson to the Los Angeles Chargers in free agency. This leaves the Patriots with Jalen Mills as the only defender to have any significant snaps at outside cornerback on the roster — Mills’ best coverage grade (67.2) came in 2017 with the Philadelphia Eagles.

Andrew Booth Jr. might not be the prototype Patriots cornerback, but the Patriots have to target one of the cornerbacks early in the draft. The Patriots might be moving away from their press man-to-man style of defense, which would make Booth the preferred target over Kaiir Elam. Whoever is selected between Booth and Elam will tell us a lot about how the Patriots want to play defense next season.

In the second round, the Patriots get one of the most productive pass-rushers in the country in Kingsley Enagbare. The 2021 Patriots had massive problems rushing the passer from the edge, as only Matthew Judon produced a pass rush grade above 67.0 — 73.2 — but even his production waned as the season went on, accumulating just a 55.6 pass rush grade from Week 13 onward. Enagbare performed at a high level in almost all the sustainable edge defender metrics, as his pass rush grade, pass rush grade on true pass rushes, pass rush grade without play action and pass rush win rate were all above the 93rd percentile among edge rushers.

The Patriots may have traded for Devante Parker, but they still need more help at receiver. Khalil Shakir is a slot player, and while Jakobi Myers did well for them in that role — playing 66% of his snaps in the slot last season —they could still look for an upgrade. Shakir can potentially be used in a more downfield role from the slot than Meyers. 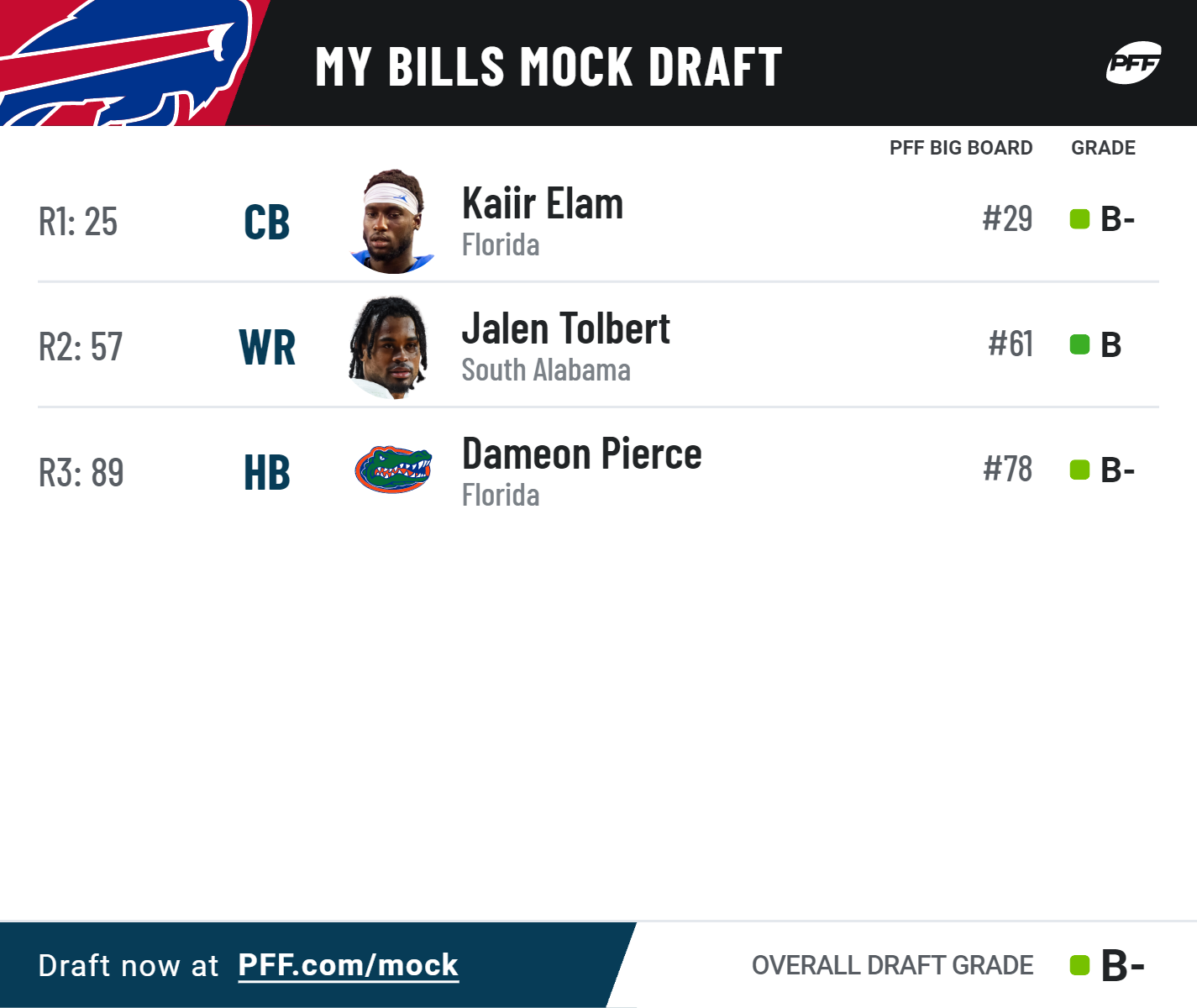 The Bills could trade back simply because they are strong at most positions and did a nice job fixing whatever issues they had in free agency.

Without a trade back, they should cornerback here after losing Levi Wallace to free agency. Elam did not have great production in 2021 after an incredible freshman season in 2019 and a nice sophomore campaign in 2020. The talent is there, especially in press-man coverage, but a 58.1 coverage grade in 2021 is why he’s available late in the first round for the Bills.

The Bills get another deep playmaker in Jalen Tolbert. Again, this is another position where they’ve already rebuilt some of their corps by replacing Cole Beasley with Jamison Crowder. They certainly want a bigger role for Gabriel Davis, too, but Tolbert can come in, stick on the vertical route tree early on and catch a load of touchdowns from Josh Allen.

Finally, the Bills add a running back in Dameon Pierce, whose missed tackles forced per attempt rate was in the 100th percentile among running backs. Devin Singletary was 88th percentile last year in the NFL, but newcomer Duke Johnson and incumbent Zack Moss were not close. 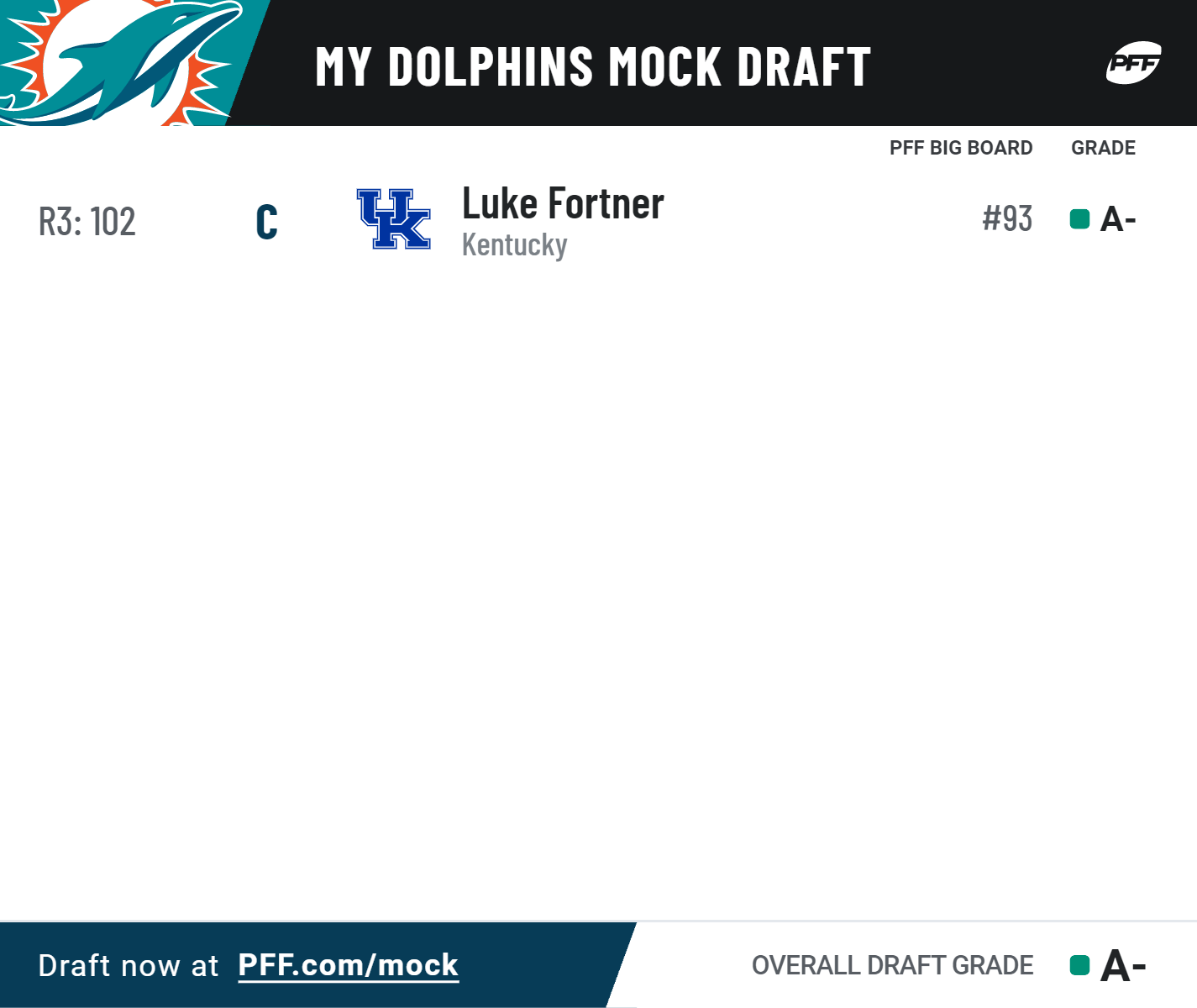 The Dolphins finally moved some of their top draft picks to get a veteran standout NFL player in Tyreek Hill this offseason, so they’re down to just one pick in the first three rounds.

The team also upgraded at tackle by acquiring Terron Armstead. However, they are still weak down the middle — Michael Deiter and Austin Reiter posted just 60.6 and 46.9 grades, respectively, in 2021. Kentucky’s Luke Fortner will hopefully help improve the interior offensive line, as he's one of the stronger linemen in the class this year as evidenced by his 31 reps on the bench press.