In the run-up to the 2022 NFL Draft, we'll be predicting the draft order for every non-quarterback or specialist position based on their athleticism numbers and final-season college production. We've already done so for edge defenders, wide receivers, cornerbacks, tight ends, safeties and linebackers.

While the target variable of our modeling was pick number, we will only be reporting the rank relative to the player’s draft class — offensive tackles, in this case. This is because there are too many externalities for why a player is selected when they are, such as the relative strength of the draft class, individual team needs and team measurable thresholds, for the prediction to be well-calibrated. However, by looking at a player’s rank, we can get a better idea of how they stack up relative to their peers.

Athletic testing numbers come from the NFL Scouting Combine, and when possible, missing data was filled in with pro day measurements. If a player did not participate in more than three drills across the combine and their pro day, they were excluded from the dataset. For the offensive tackle class, that means Evan Neal and Rasheed Walker, among others, are not included in this section of the analysis.

If a player qualified to be in the dataset, their missing events were assumed to be position average over the past five combines. These measurements and times first were pushed through a principal component analysis to account for the overlapping information in the drills. And those principal components were then thrown into a random forest model to handle potential nonlinearities and complex relationships between athletic variables to predict draft position.

Far and away, NFL teams appear to value agility the most in an offensive tackle prospect. However, arm length — a measure for which teams often have strict minimums — was not included in this exercise. If length were as important, though, we would likely see taller tackles be pushed up the board. Instead, we see little relationship between height and how the model views them. Explosiveness appears to be the next most important measure. Both of these imply that NFL teams prefer to draft tackles who are able to athletically match and mirror edge defenders over simply large tackle prospects. 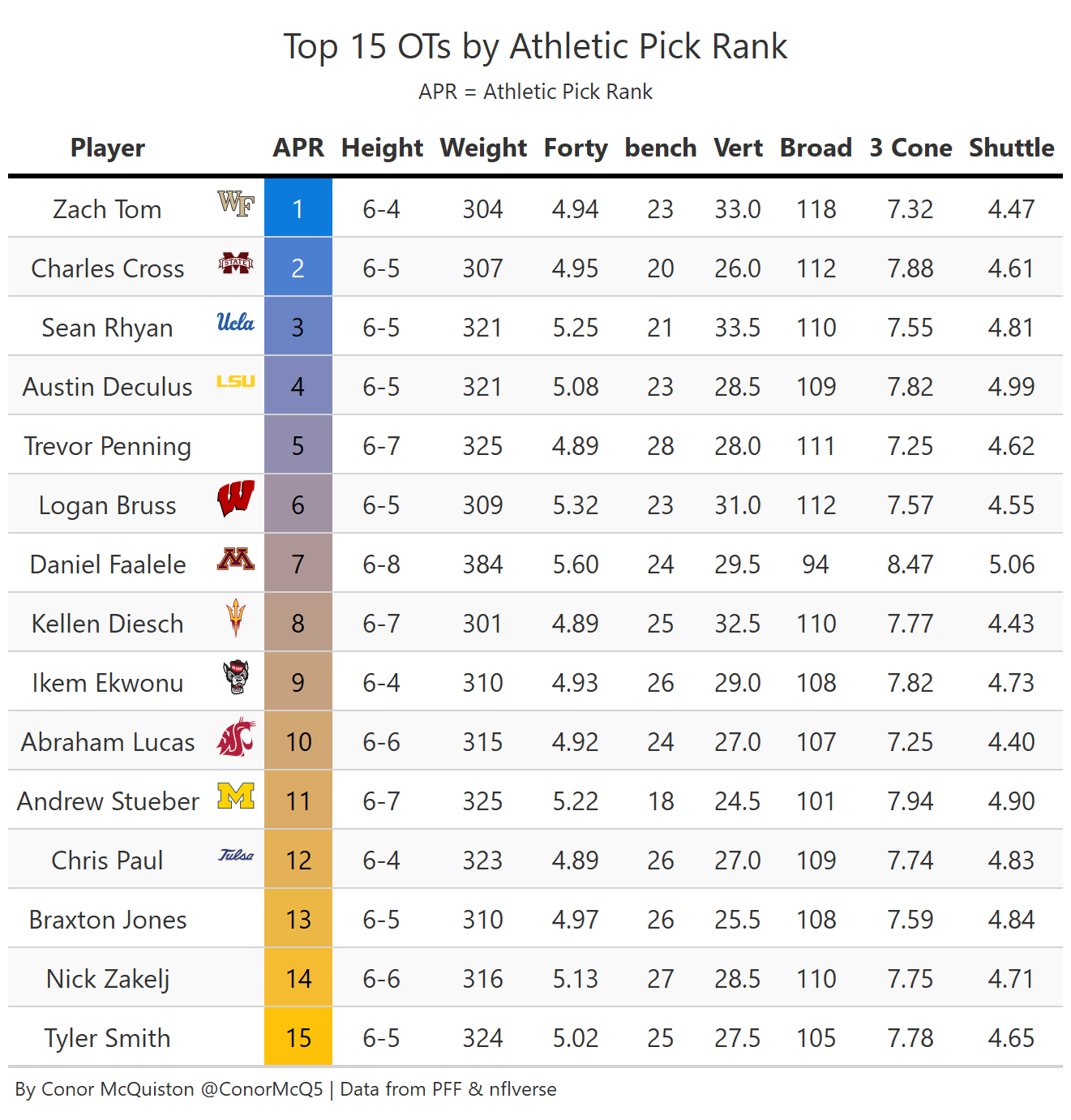 We additionally modeled draft position based strictly on production metrics charted by PFF, which was also put through a principal component analysis to handle overlapping information and then thrown into a random forest model to handle nonlinearities. Due to the lack of statistics available for offensive linemen, the inputs were strictly based on PFF grades. The grades were binarized and transformed into win and loss rates before being processed. We also added an indicator for whether the player was in a Power Five conference since strength of competition is meaningful for NFL evaluators.