With six picks in the first round of the 2022 NFL Draft, NFC East teams will shape the way it plays out.

The New York Giants, picking fifth and seventh, can make a significant push toward the 2022 playoffs by picking the right players early while the Philadelphia Eagles, who have two picks around the midway point of the first round, can solidify what already was a playoff unit. The Dallas Cowboys saw some quality players walk in free agency and will have to hit on their early-round picks. The Carson Wentz addition to the Washington Commanders via trade this offseason means they have to prioritize surrounding him with talent. 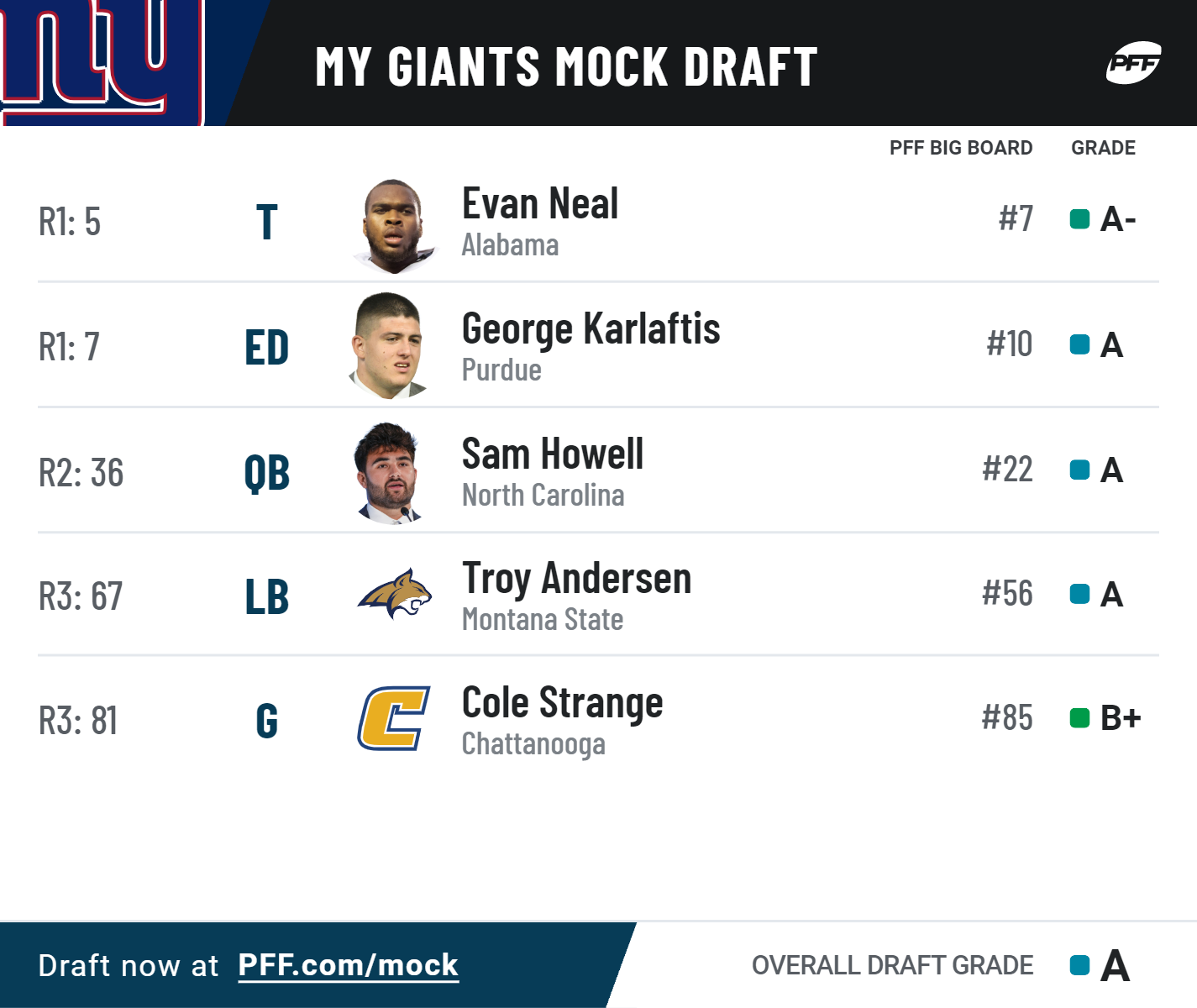 The Giants are in the process of setting up a nice work environment for whoever plays quarterback for them now or in the future. Their 2020 first-round pick, Andrew Thomas, saw his pass-blocking grade jump from 54.7 as a rookie to 82.1 as a sophomore. The Evan Neal pick helps them solidify the opposite tackle position, as Nate Solder proved that he's not the future at right tackle after producing back-to-back seasons where he did not break a 65.0 overall grade. Even though Kayvon Thibodeaux and Aidan Hutchinson were already off the board, they still get an impressive edge rusher with the seventh overall pick with George Karlaftis.

The Giants were one of the worst edge rushing teams last season finishing with a cumulative 57.9 pass rush grade from edge rushers, fifth lowest in the league. Karlaftis fits in especially with the loss of Lorenzo Carter to the Falcons.

The Giants can’t really go wrong with these two picks, as a Tier 1 player at a need position should be available at both of their first-round picks.

The future of their starting quarterback, Daniel Jones, is also uncertain, and the team would love if a top-five quarterback fell to their second-round pick. In this case, Sam Howell is the selection, but it could be any of the second-round quarterbacks. The Giants could wait out Jones for one more season but giving him some legitimate competition is fair game, especially if they can load other areas of the roster enough to be competitive.

With their next two picks, the Giants selected two FCS players at positions of direct need. New York’s linebacker group was downright atrocious last season, so Troy Andersen would be a great addition. The team also lost guard Will Hernandez to free agency, so they take Cole Strange to be his replacement. 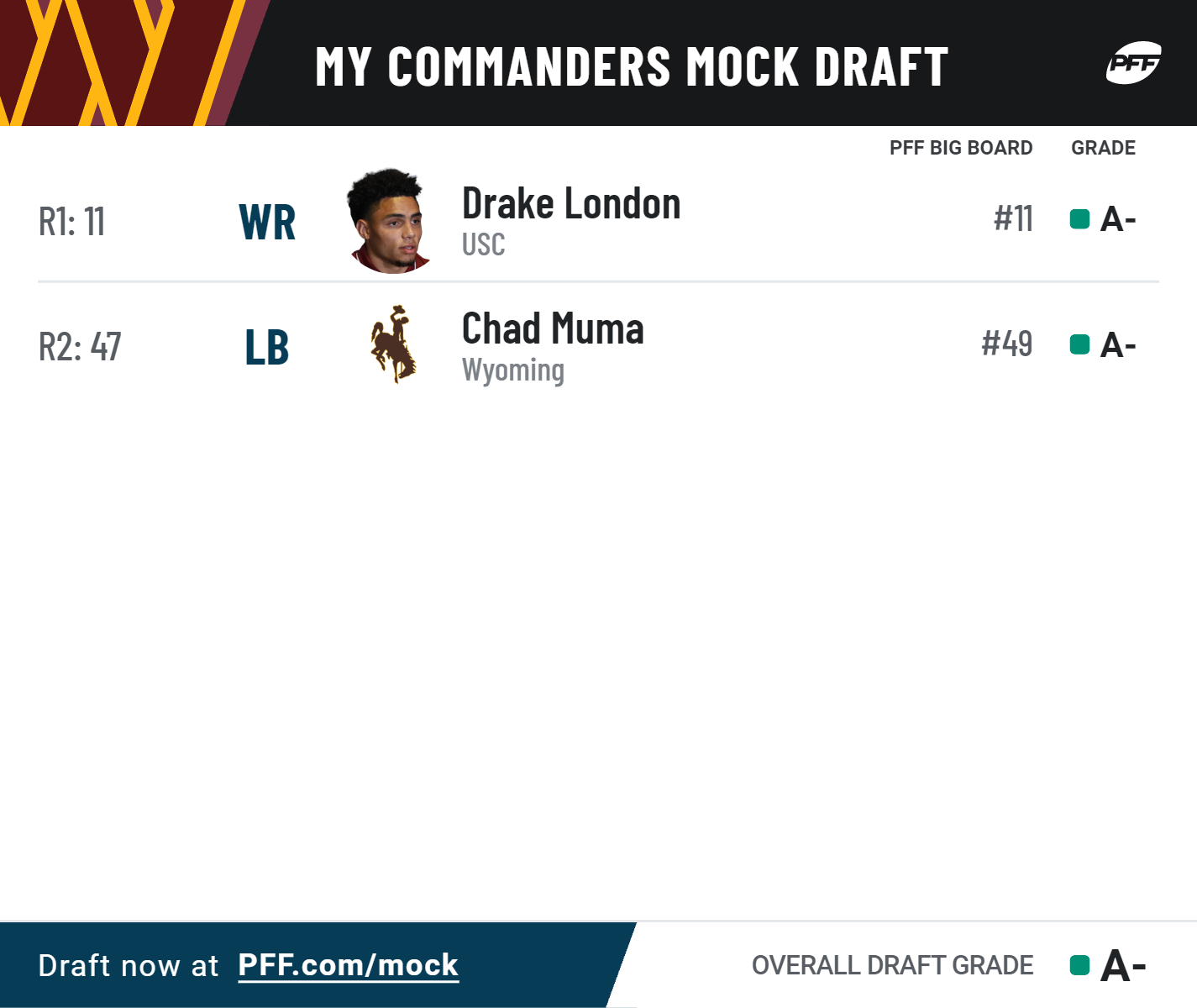 Curtis Samuel will return to Washington next season, but after putting most of their eggs in the Wentz basket, the Commanders need to surround him with even more receiving talent. Drake London will play outside opposite Terry McLaurin while Samuel plays on the inside. London is not the same type of receiver as McLaurin, but he does provide Washington with another player who can make contested catches. McLaurin led the league in contested catches last season as a 6-foot, 208-pound receiver. London led the FBS in contested catches as a 6-foot-4, 219-pound receiver, as the USC product excels at high-pointing contested passeses.

With how erratic Wentz can be, receivers who can make receptions outside their frame and in contested situations are key. McLaurin is the speed, acrobat type of receiver while London is the big-bodied, jump ball receiver.

The Commanders linebacker room is a mess, so taking the super productive Chad Muma is a step in the right direction. His athletic traits stand out, which was confirmed when he tested at a high level in multiple disciplines. His bench press, vertical jump, broad jump and three-cone time were all above the 85th percentile among linebackers. 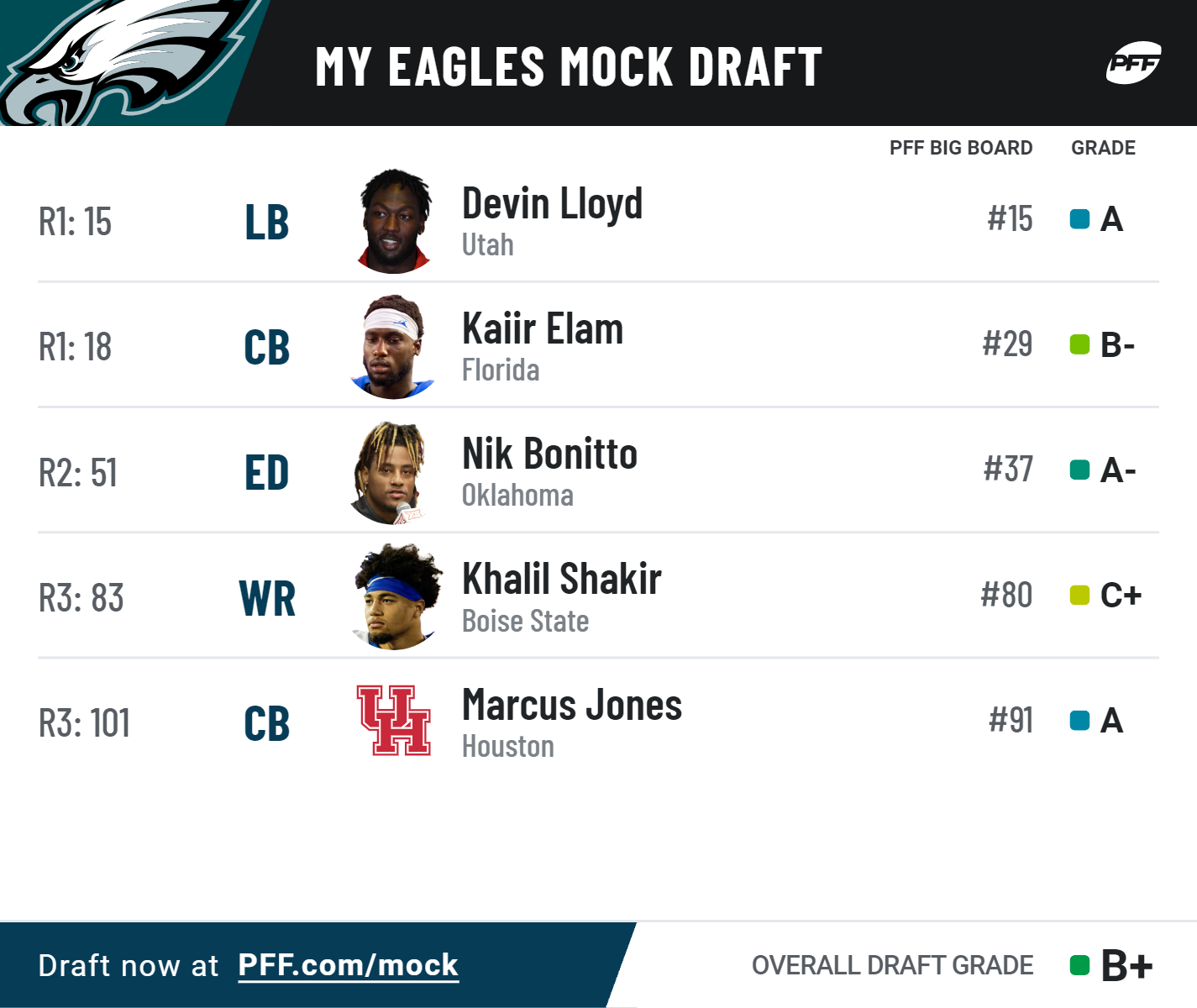 When Philadelphia traded with the New Orleans Saints and gained a first-round in the 2023 NFL Draft, it’s believed that they acquired assets for that quarterback-rich draft class in case Jalen Hurts does not pan out in 2022. If that’s the case, they should target the defensive side of the ball with their first two picks. Having said that, taking a receiver to help Hurts would also be a good move.

Devin Lloyd fits the bill as a coast-to-coast linebacker who uses his finesse to get around blockers and make plays. He could be a slightly more athletic Darius Leonard, who the Indianapolis Colts selected when Eagles head coach Nick Sirianni was in Indianapolis.

In Kair Elam, the Eagles get a man-to-man cornerback to pair alongside Darius Slay. After losing Steven Nelson in free agency, the only other outside cornerback the Eagles have is Zech McPhearson. Elam and Slay could present a vicious 1-2 punch at the position to go alongside Avonte Maddox in the slot.

Nik Bonitto falling to the 51st pick in the draft would be huge for Philadelphia. Outside of Josh Sweat, the Eagles didn't receiver much production off the edge last season. Derek Barnett has not been able to get over the hump, as he’s never produced a 70.0-plus grade over the course of a season. Brandon Graham is still around, but at 34 years old and coming off playing less than 100 snaps last season, they need a reset. Bonitto has the speed to get to the corner and just enough bend to give offensive tackles fits.

Eventually, the team will have to take a receiver and with a hole in the slot, they could fill it with Khalil Shakir. Quez Watkins was the Eagles' main slot receiver last season, and it didn’t go very well. The team could also take a player who plays predominantly outside to replace Jalen Reagor, but it’s possible the franchise doesn’t feel like that ship has sailed quite yet. 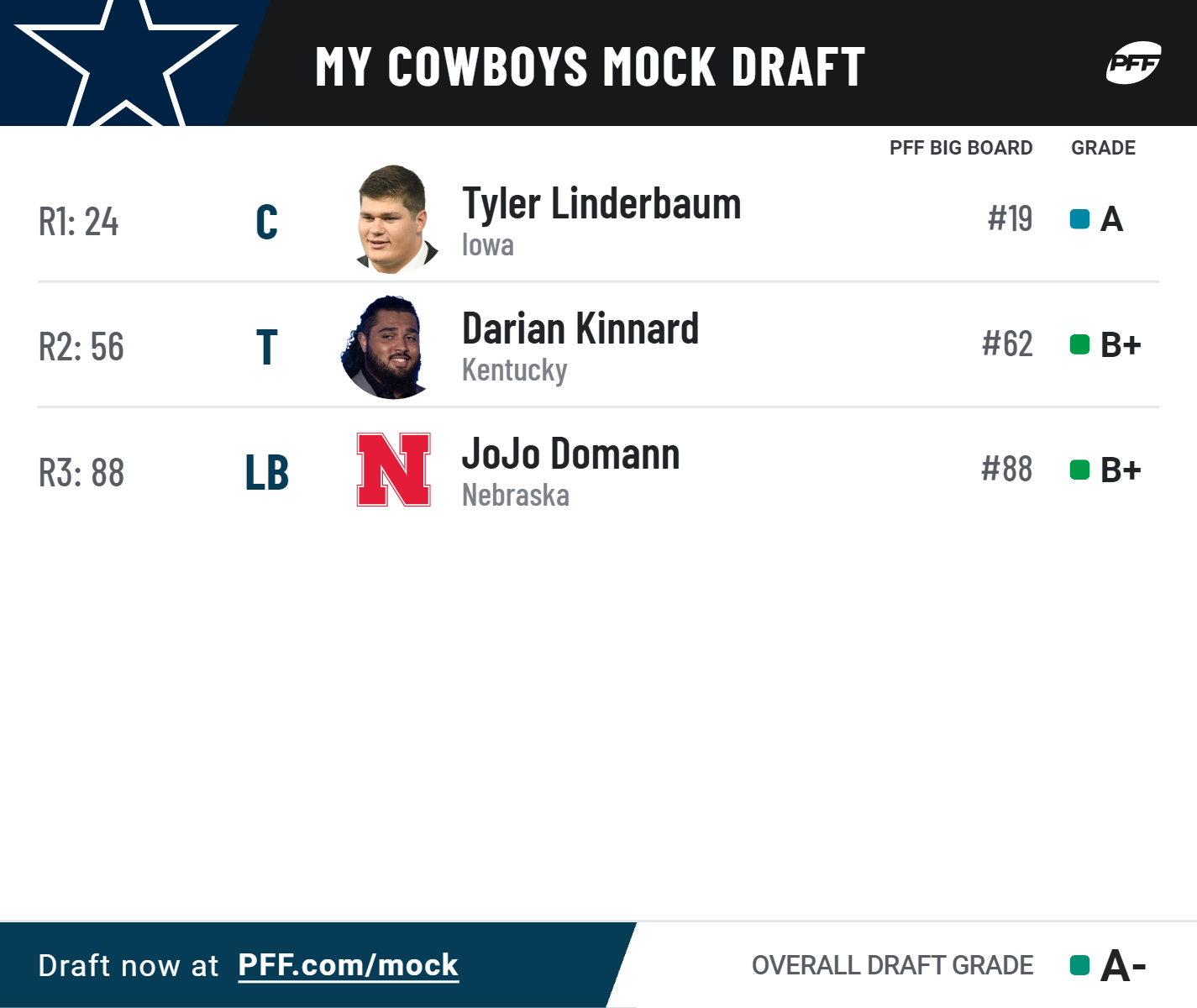 From a position of strength over the last half-decade to murkier waters, the Cowboys' offensive line continues to go through changes. Tyron Smith and Zack Martin are set at left tackle and right guard respectively, but any other position could be improved upon. Here, they take the best center prospect with their first overall pick before upgrading at tackle in the second round.

Tyler Linderbaum is easily the best center prospect in this year's draft and possibly the best in the last decade. Fans of the Cowboys will remember the glory years when Travis Frederick manned the middle of the offensive line. Linderbaum excels as a run blocker, as he finished in the 99th percentile in run blocks that were graded positively last season.

Darian Kinnard played both tackle spots as a Kentucky Wildcat but some project him as an interior player. Kinnard’s played mostly right tackle in college, posting a 93.7 lifetime grade at that position. He would be one of the bigger guards in the league if he slid inside, as his arm length and hand size would be 97th and 98th percentile, respectively, among guards.

With Jojo Domann, the Cowboys find a replacement for the departed Keanu Neal. He’s one of the quicker linebackers in the draft, posting a 2.63-second 20-yard dash and 1.54-second 10-yard split. His 6.88-second three-cone time finished in the 88th percentile among linebackers. The Cowboys can ease the former Nebraska Cornhusker along while playing opposite Micah Parsons at inside linebacker or off the bench when Parsons becomes an edge rusher in certain formations.