It took a flurry of scoring in the final third of the fourth quarter in Tempe, but we came out of Week 3 with our first winning week of the season, going 3-2 on the back of outright wins by underdogs Syracuse (our PFF Forecast Pick of the Week) and LSU. After frustrating us in Weeks 1 and 2, San Diego State and Arizona State were able to get us over 45.5 last week. We hope to carry this momentum into Week 4.

Our models rely heavily on our aforementioned PFF ELO rating system for college football and continue to get closing line value on these picks (we’ve done so on 8-of-13 picks where the number changed). We also include situational information like crowd size and travel distance, along with opponent-adjusted information on things like PFF passing grades when clean.

We’re going to go with a few more short dogs, taking Oregon (our College Pick of the Week), Minnesota and Tennessee. We’re going to fade Florida again and pick a San Diego State game for the third time. NC State is our other favorite, laying 5.5 points on the road against Marshall.

Our analysis will involve a point-counterpoint analysis between the two of us, using perspectives that only the PFF grades and data can provide. For more picks-related opinions, follow us on Twitter at @BrownBenjamin22 and @PFF_Eric. 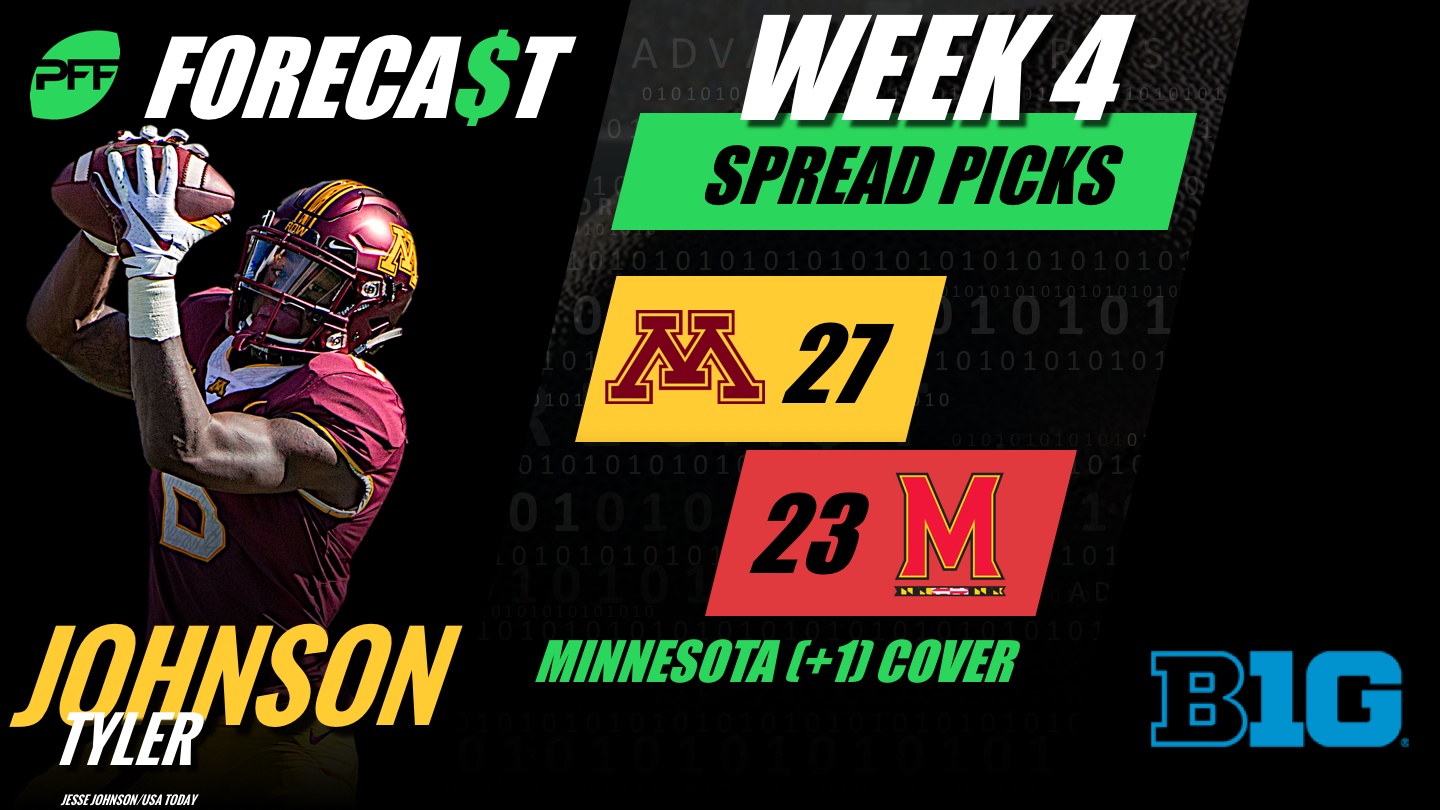 Point (Eric Eager): Ben is a Minnesota Gophers fan, so for the integrity of this piece, I’m going to write the point here. It’s simple, Maryland is the second-least efficient Big Ten team in terms of passing on first downs, while Minnesota is second-best in terms of defending the pass. Minnesota quarterback Zach Annexstad has generated over 0.10 EPA on his dropbacks, while Maryland quarterback Kasim Hill has been on the other side of zero (-0.19). While losing running back Rodney Smith has not been good in terms of personnel for the Minnesota running game, Bryce Williams has generated over 200 yards and 120 yards after contact in his stead the last two weeks. Give me the better team getting points here.

Counterpoint (Ben Brown): The Gophers travel to Maryland for their first road game of 2018. They have looked solid through their non-conference schedule but have the propensity to fall apart in Big Ten play. Maryland has been effective on defense with an EPA allowed on early-down passes of -0.12. Hill was atrocious in Week 3 against Temple but previously led the Terrapins to a come-from-behind victory over Texas in Week 1. Before Week 3, he had a 93.1 passer rating when kept clean. If the Temple game was an outlier performance for him then this could turn into a difficult game for the Gophers to cover on the road.

Point (EE): This is an interesting one, as both teams had the week off last week dealing with the hurricane in the southeast. In a game where one team clearly outclasses the other, our friends at 247 Sports gave NC State’s recruiting class a score that was 40 percent higher than Marshall’s, it’s strange to see a spread in the single digits, let alone less than a touchdown. While NC State hasn’t exactly played anyone, Marshall struggled in one-, and two-score victories against Miami of Ohio and Eastern Kentucky, respectively, meaning I’m not buying that much into the fact that their offense has been pretty efficient so far, generating success on over half of their passing plays and almost 45 percent of their run plays. Take Ryan Finley and his 41.7 percent positively-graded passes so far this season and lay the points.

Counterpoint (BB): Isaiah Green has been electric leading the Thundering Herd offense to start 2018. It may have been against lesser opponents but 7.2 percent of his throws have been big-time throws and he has zero turnover-worthy passes in 2018. NC State hasn’t exactly beaten a quality opponent either rolling over Georgia State in Week 2 but needed a late touchdown to put away James Madison in Week 1. The NC State defense has allowed a successful pass on 48 percent of early-down attempts. If they give Green an inch, he may end up taking a mile at home on Saturday.

Point (BB): We are picking against Florida for the second week in a row after they handed us a beatdown of Colorado State in Week 3. Tennessee quarterback Jarrett Guarantano has asserted himself as one of the top quarterbacks in the SEC with a positively-graded throw on over 30 percent of his dropbacks. He has zero turnover-worthy throws which will be crucial to maintain this week. Florida's defense has allowed a successful pass on 29 percent of early-down attempts (first in the SEC). This game will be won or lost based on how effective Guarantano is against the Florida pass defense.

Counterpoint (EE): Florida got us last week, on the strength of special teams touchdowns and our overvaluing of what it meant for Colorado State to come back and beat Arkansas State at home the previous week. When the Vols had their turn at the plate against West Virginia at home in Week 1 they were not able to cover the number, losing 40-14. Feleipe Franks has not graded well in our system, generating four turnover-worthy throws to each big-time throw, but the offense has been efficient when he’s thrown the ball (+0.15), so there’s always the chance they get it going and, like last week, cover this number – even on the road. 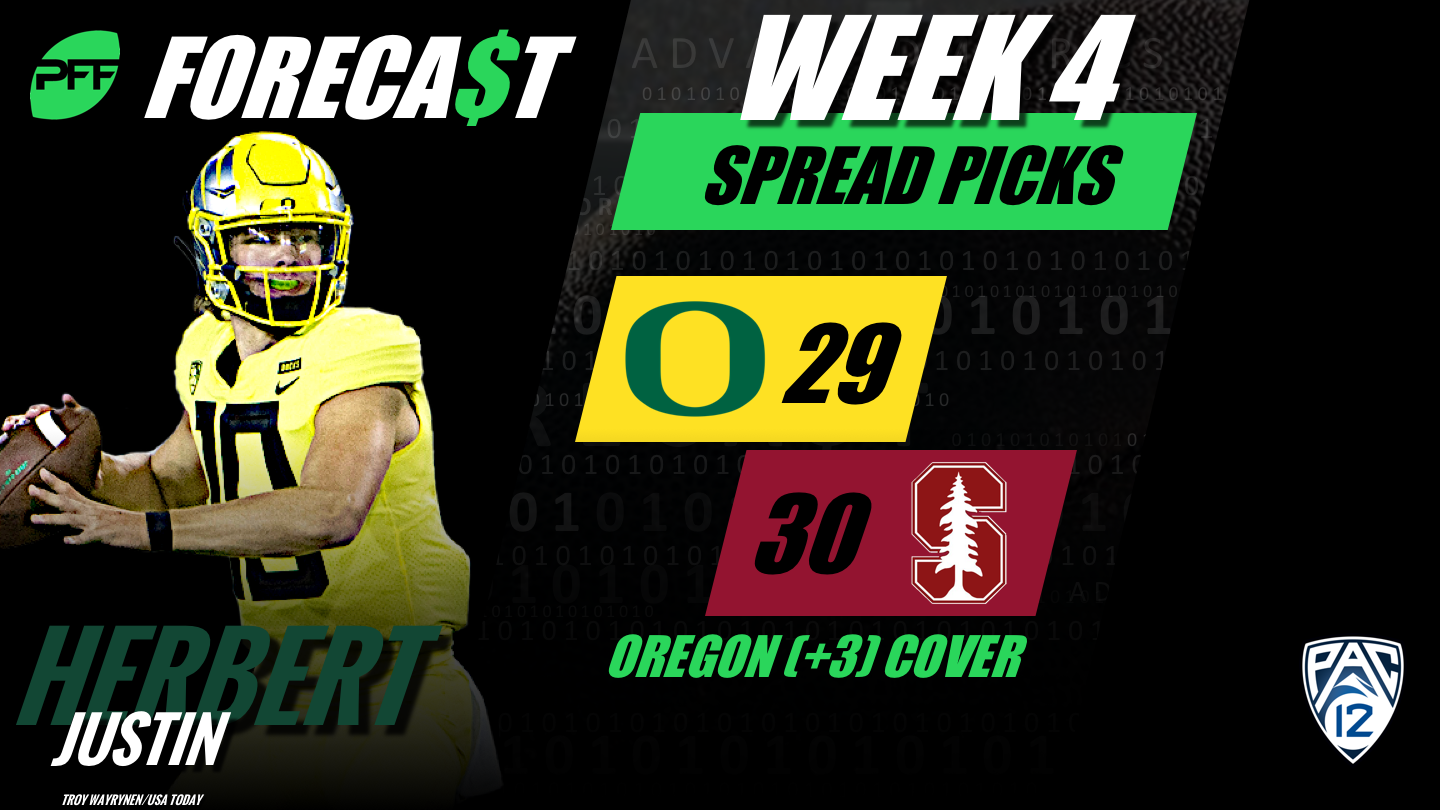 Point (BB): Justin Herbert has been phenomenal to start 2018 with 13.2 percent of his attempts grading as a big-time throw. At No. 9 in our current Heisman rankings, he has the talent to lead Oregon to victory against any team in college football. Truthfully, the Ducks have yet to play a quality opponent so I am hesitant to put much stock into their efficiency numbers, especially on the defensive side of the ball. They have the 36th-best defense according to our PFF ELO rankings and will have to continue with their early-season success at applying pressure on passing downs. At home, with the better quarterback, I am willing to take the points.

Counterpoint (EE): Our third Stanford game of this young season and while I think Oregon can contain Bryce Love in what has been a pretty poor run game so far for Stanford this season, K.J. Costello has been very good throwing to J.J. Arcega-Whiteside (13-of-19 for 324 and five touchdowns) on the outside and his tight ends down the middle of the field. Oregon has not been tested by an offense of this quality, and while I have a ton faith in Herbert over Costello, this is certainly not a slam dunk.

Point (EE): Another team for which we’ve picked three times! After winning as 5.5-point dogs against an undefeated Arizona State team last week, the Aztecs now have to handle success as double-digit favorites against an Eastern Michigan team that has a PFF ELO rating 130 points short of them. Teams that are clear favorites and also have a running game as strong as San Diego State’s (697 yards on 5.2 a carry so far) are more likely to cover the spread if they take care of business early in the game. Eastern Michigan’s 50 percent early-down success rate against the run through the season’s first three weeks only serves to accelerate that process.

Counterpoint (BB): We live for the late-night West Coast sweats. To start 2018, Eastern Michigan has already beaten a Purdue team on the road as 15-point dogs. They have employed a bit of a rotation at quarterback with Mike Glass and Tyler Wiegers both seeing snaps. Wiegers especially has been quite effective with a passer rating when kept clean of 115.8 while the San Diego State defense has been dominant from an EPA standpoint. If the Aztecs do get out to an early lead, they may slow the pace to a crawl and with an 11-point spread, could easily allow a late garbage touchdown to swing this game from a cover to a loss.