The 2019 season begins this weekend and with that, the full set of 2018 data officially becomes history. We look ahead towards the top-graded players returning in each conference, keeping things going with the Conference USA. 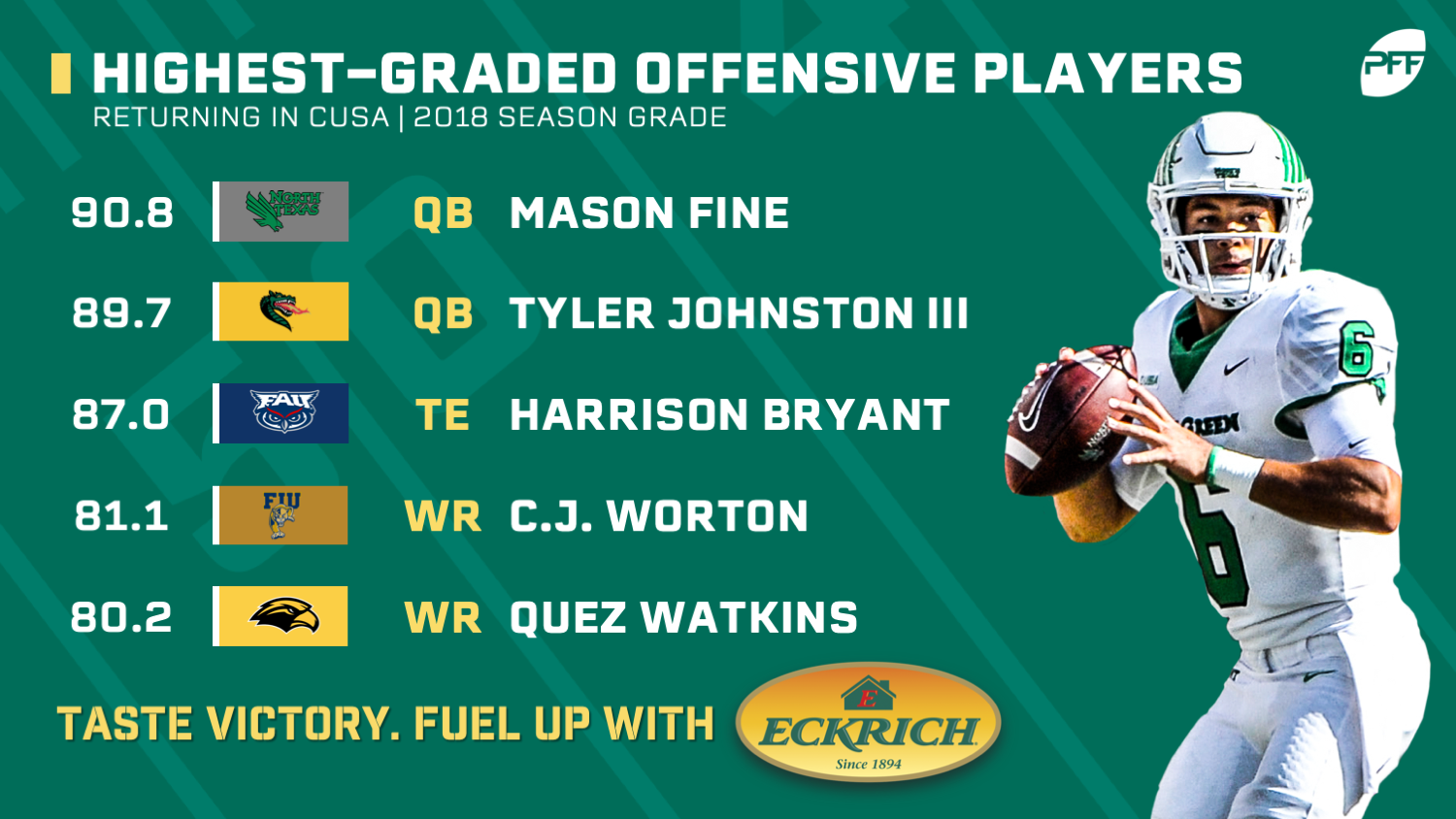 Fine is as good as they get as a college quarterback and returns as the nation's leader in adjusted completion percentage as well as top returning marks in several other PFF categories. The darkhorse for C-USA QB of the Year is Johnston, who dominated in limited snaps and was sharp throwing to all levels of the field.

Dancy has the highest grade among returning backs as he averaged 3.88 yards after contact and forced 23 missed tackles on just 125 carries. Torrey and Easly are a potent threat with Torrey leading the way in the conference with 52 missed tackles forced on the ground last year. Easly ran the ball 74 times and had 262 of his 386 yards come after contact.

Worton averaged 16.9 yards per reception last year with 29 of his 37 receptions converting a first down or touchdown. Bussey is set to break out more so than he already has this season with Fine throwing his way while Hardy turned 127 targets into 1,145 yards and 54 conversions himself.

Bryant is the nation's highest-graded tight end returning as he hauled in 44 receptions for 659 yards, 441 of which came after the catch. He had 28 conversions of a first down or touchdown compared to just one drop as well.

Clark returns as the conference's highest-graded overall and in pass protection as he looked dominant a year ago. Pate, the only returning tackle close in overall grade, also looked comfortable in both the run and passing game as they represent the top tackle tandem in the Conference USA. 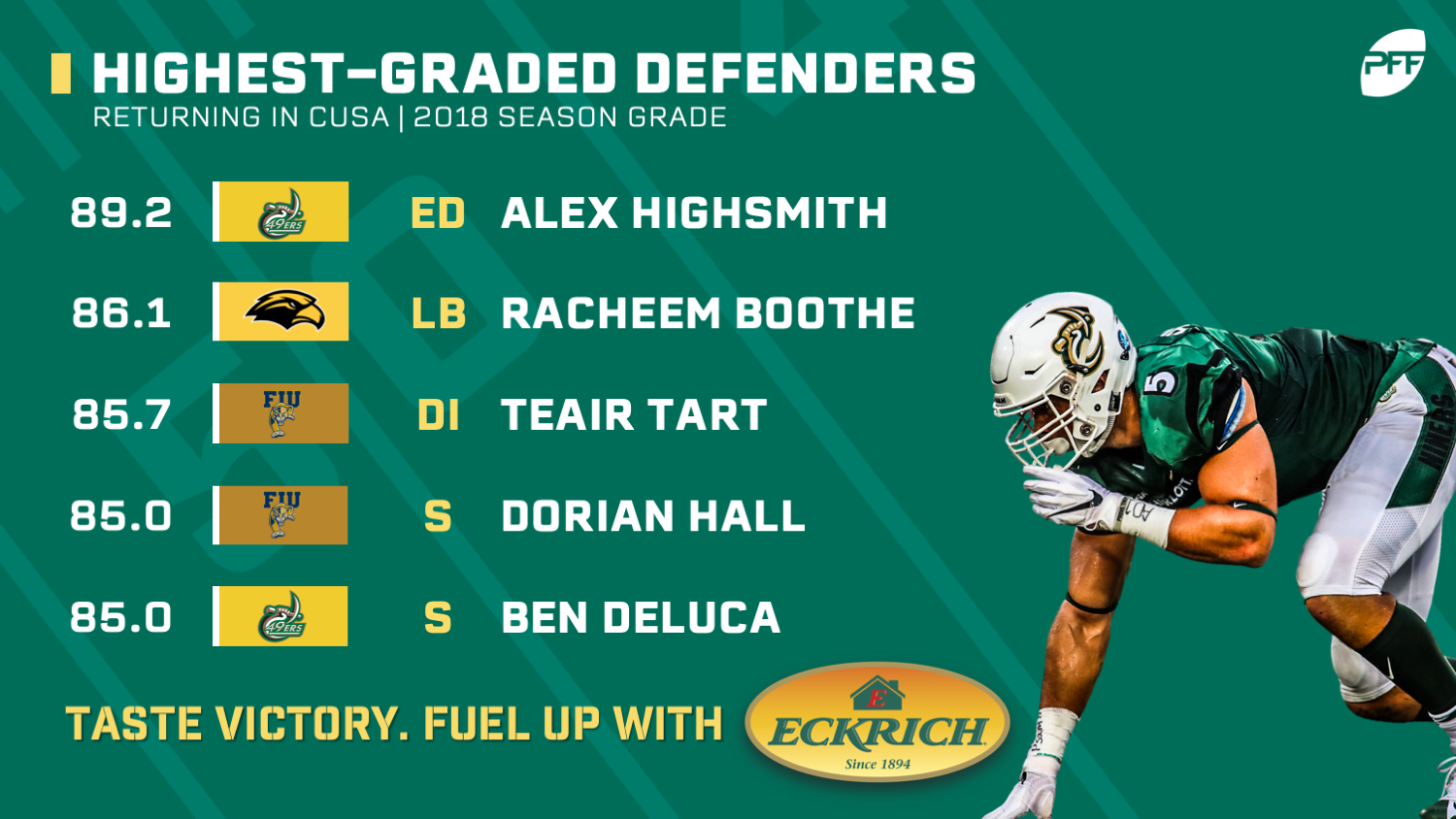 The conference's leader in QB pressures just missed this list as LaDarius Hamilton had 47 pressures a year ago. Highsmith was right on his heels with 43 while also possessing the conference's top run-defense grade. Silva played just three games but was dominant on the pass-rush, recording 14 pressures on just 88 snaps.

Tart is a stout run defender with plus-grades on the pass-rush while Hames himself returns as the conference's leader in pressures and plus-grades in the run game. Adams is in line for big numbers with Zach Abercrumbia's transfer to SMU as Adams had 21 total QB pressures at a year ago.

Booth and Gemmell both demonstrated strong pass-rushing skills when tasked with blitzing and are third and second, respectively, among returning linebackers in the conference. Brown played the fewest snaps of the linebackers listed above but is set to see extended action with Ben Holt's transfer to Purdue.

Harris will miss the season with an unfortunate injury as he not only was the highest-graded returning player in his conference but among the highest-graded cornerbacks in the country. Robertson now assumes that role as he allowed just 54.9% of his targets to be caught and made four interceptions and 11 pass breakups last season.

Dames appears on both the cornerback and safety list as he logged enough snaps to qualify for both. While lined up at safety, he allowed just 15 receptions for 149 yards and made three interceptions for a stout coverage grade, the highest in the conference.