The All-Pac 12 selections below are headlined by the first team with the second team listed below each position. 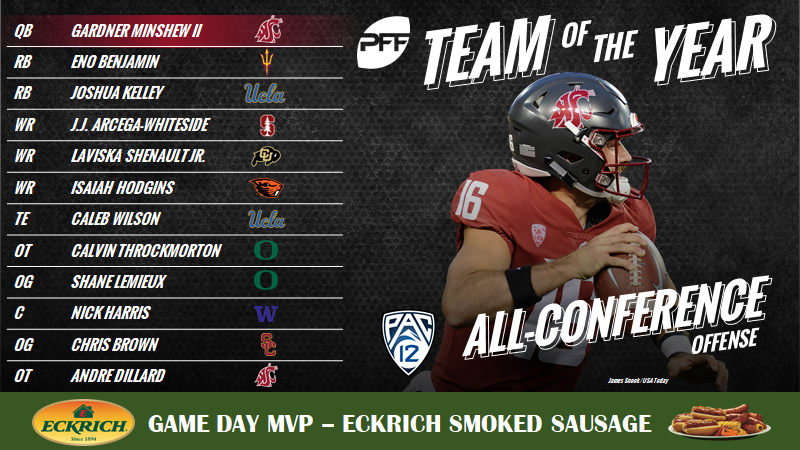 Minshew tore it up in his lone season at Washington State and his 82.3 adjusted completion percentage ranks No. 1 among all FBS quarterbacks.

Benjamin was one of college football's most difficult players to tackle in his breakout season, as he forced 69 missed tackles on rushes, ranking him No. 3 among all FBS running backs.

Kelley was head coach Chip Kelly's bell cow back this season, with 642 of his 1,240 rushing yards coming after contact.

Arcega-Whiteside used his big body to excel at red zone and back shoulder throws and his 89.0 receiving grade ranked No. 7 among all Power-5 wide receivers.

The sure-handed Hodgins had only one drop on his 80 pass targets for the season.

Throckmorton's pass-blocking grade of 91.6 ranks No. 4 among all FBS tackles.

One of the pieces in a very talented Ducks' offensive line, Lemieux didn't allow a sack or QB hit all season and only eight pressures on is 426 pass-blocking snaps.

Harris' run-block grade of 75.1 leads all Pac-12 centers and he didn't surrender a sack all season.

Brown's pass-blocking efficiency rating of 99.1 ties him at No. 6 among all FBS guards.

Dillard was named our best pass-blocking offensive lineman in the country this season, allowing only one sack, three QB hits and 11 hurries on a whopping 693 pass-blocking snaps. 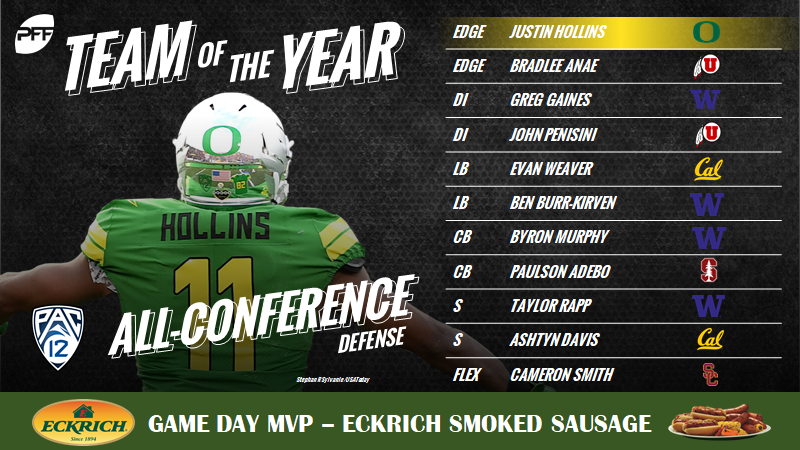 Hollins posted the highest pass-rush grade (86.8) among all of the Pac-12's edge defenders.

Anae is a consistent pass-rushing threat from the right side of the Utah Utes defense as he notched 11 sacks, six QB hits and 34 hurries on his 429 pass-rushing snaps.

Gaines is one of the most dominant interior run defenders in the nation and his 92.1 run-defense grade ranks No. 6 among all FBS interior defensive linemen.

Penisini was consistently good against the run and added four sacks, two QB hits and 24 hurries on his 294 pass-rush snaps.

Murhpy's overall grade of 91.9 and coverage grade of 91.9 both lead the nation's cornerbacks as he recorded the Pac-12 Championship Game's lone touchdown on a pick-six to put the exclamation point on his season.

Adebo's monster performance against Stanford propelled his grade to the first team, as he had arguably the catch of the year with his end-zone interception.

Rapp is a rare player with the ability to play any back-seven position if needed. He finishes the regular season as our highest-graded safety in the nation (91.4) and displayed his versatility with five sacks, two interceptions and five pass breakups.

Davis is a rangy and athletic back-end defender who made eight plays on the ball in 2018 (four interceptions and four pass breakups).

Smith made a splash as a freshman and improved his grade every year since, and his 91.2 run-defense grade leads all Pac-12 linebackers.

Gay kicked made 23 of his 28 field goal attempts including two from 50-plus yards.

Bailey's conference-leading average hang time of 4.42 led to a conference's lowest percentage of returned punts at 17.0.

Davis pulling double-duty on the Pac-12 first team as he leads the Pac-12 in both kick return yards (607) as well as kick-return grade.

Vaughns averaged 10.5 yards per return including an 82-yard touchdown against Arizona State.