The All-ACC selections below are headlined by the first team with the second team listed below each position. 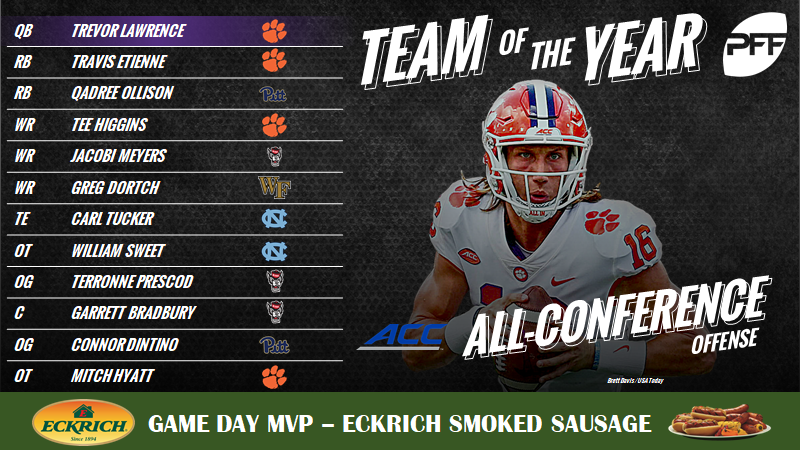 What Lawrence did as the starting quarterback for Clemson is nothing short of remarkable. Taking remarkable care of the football, he finished the season with the fewest amount of turnover-worthy plays out of all qualified starting FBS quarterbacks.

Etienne's big year can be summed up in one statistic: on 176 carries, he averaged 8.3 yards per attempt and gained 771 of his 1,461 rushing yards AFTER contact.

Ollison finished second in total rushing yards and second in 10-plus yard runs with 34. He averaged a very healthy 6.3 yards per carry including 3.93 yards after contact per attempt.

Higgins hauled in 39 combined first-down and touchdown receptions on his 52 receptions, gaining 267 yards after the catch. He forced 10 missed tackles after the catch and saw a 128.1 passer rating when targeted.

Meyers dominated with Finley tossing him passes, maybe not on the touchdown sheet, but seemingly everywhere else. He finished tied for the lead with 89 receptions, second with 44 first-down receptions and third with 1,029 yards.

No ACC tight end went over 350 receiving yards and while Tucker only had 265 yards through the air, he averaged 8.1 yards after the catch per reception and didn't allow a QB pressure on 30 pass-blocking snaps.

A regular on our ACC Team of the Week series, Sweet was dominant in pass protection, allowing just three combined sacks and hits and just 11 total pressures on 398 snaps in pass protection. He finished with the conference-high 72.8 run-blocking grade to boot.

Prescod finished the 2018 regular season with the highest overall grade (85.7) among all offensive linemen as he allowed just six hurries on 342 pass-blocking snaps. His 86.2 run-blocking grade was 4.1 points higher than the next closest offensive lineman.

Bradbury finished with the conference's second-highest run-blocking grade of all linemen at 82.1 while also impressing in pass protection. On 496 pass-blocking snaps, he allowed just 11 pressures.

Dintino's 76.3 run-blocking grade was third among guards as he also only allowed seven total pressures on his 336 snaps in pass protection, working in between left guard and center for Pittsburgh.

Hyatt utilized a strong effort in the ACC Championship game to push him past Charlie Heck for the spot here as he, like Sweet, allowed only 11 total pressures on 398 pass-blocking snaps. 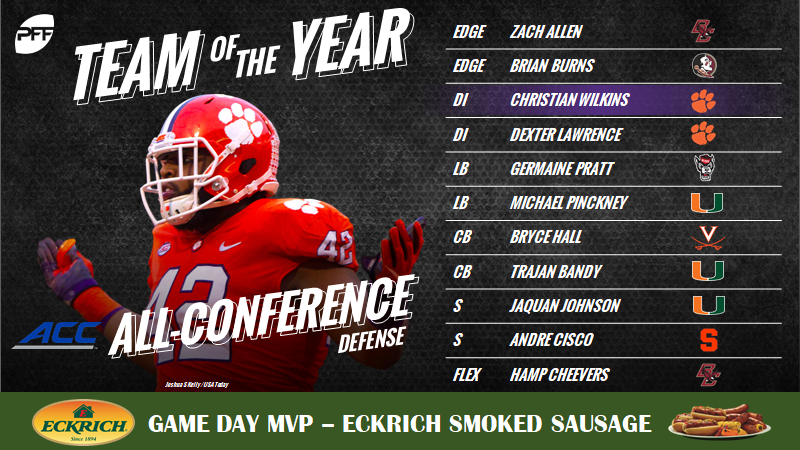 The nation's best bull rush, Allen finds himself on the All-ACC team with a ridiculous five sacks and conference-leading 16 QB hits. In total, he recorded 55 total pressures on his 454 pass-rushing snaps and made 39 defensive stops.

Through the regular season and all the conference championships, Burns still holds the edge of Ohio State's Chase Young with a national-best 69 total QB pressures.

Wilkins not only leads the conference's interior defensive linemen in total pressures (36), he also led them in sacks (six) and finished second in hits (nine) and forced fumbles (two).

The fellow 1-2 punch along the Clemson defensive interior, Lawrence racked up a conference-best 10 QB hits and finished second only behind his teammate with 31 total QB pressures.

Pratt was solid all over the field for the Wolfpack this season, showing serious skill when blitzing the passer. He led all ACC linebackers with 26 QB pressures despite just 79 pass-rushes. Pratt also missed just four tackles on 92 attempts.

Pinckney was strong in all facets for the Hurricanes this season but especially in coverage where he was targeted 15 times and allowed only 22 yards on nine receptions. In total, his 91.8 coverage grade was the highest among conference linebackers.

Finishing the season with 17 pass breakups, Hall had five more than the next closest ACC cornerback while he allowed just 49.3% of passes thrown his way to be caught. Despite seeing 67 targeted passes, Hall allowed just 97 yards after the catch, fewest among ACC corners with at least 64 targets.

Bandy limited teams to just a 45.2% catch rate, allowing just 19 receptions while breaking up six and intercepting three passes. He chipped in with 15 defensive stops and limited receivers extremely well all season.

A fellow Hurricane in the defensive secondary, Johnson showed his ability to fly around the field all season. He allowed just eight receptions and 53 yards on 261 snaps in coverage while he also missed just four tackles on 75 attempts in 2018.

A true freshman standout all year for Cisco, he finishes the regular season with seven interceptions and nine pass breakups. In total, on his 445 snaps in coverage, he allowed just 45.2% of targeted passes to be caught and just a 45.6 passer rating when targeted.

Cheevers tied with Cisco with the ACC lead in interceptions with seven as he also limited receivers to a less than 50.0% catch rate. He added three pressures on just five blitzes and saw a 40.9 passer rating when targeted.

Szmyt was perfect on extra points this year (57-of-57) but wasn't limited to just short chip shots. On 50-plus yard field goals, he was a perfect 3-of-3 and missed just four field goals all season long (28-of-32).

Hofrichter's 39.2 net yards per punt were good enough for second in the conference but his 32 punts downed inside the 20-yard line were three clear of the next best. Only 16 of his 61 punts were returned and he averaged a conference-best 4.26 seconds of hangtime per kick.

The highest-graded kick returner in the conference, Thomas averaged 25.8 yards per return, returning two for touchdowns. His long of 101 yards was one of the highlights of the season for the Yellowjackets and he didn't muff a kick all season long.

Dortch returned 25 punts for 276 yards and two touchdowns, averaging 11.0 yards per return with only one muffed punt.