The Week 6 Eckrich Big-12 Team of the Week powered by PFF saw some impressive performances and, of course, the strength of opponent also factored into the overall selections as did the PFF player grades 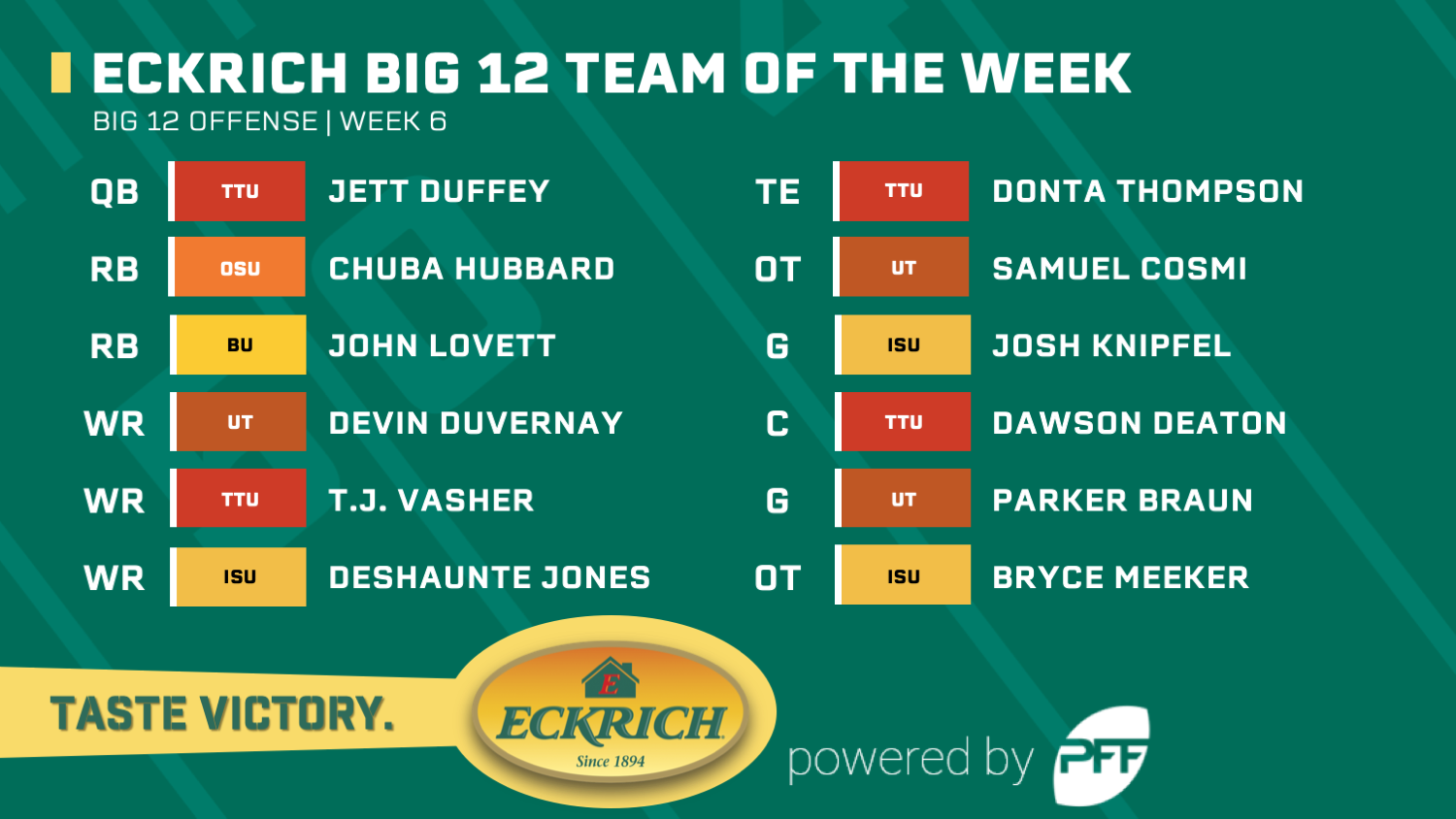 Duffey's completion rate of 59.1% against Oklahoma State objectively could have been better, but there is no arguing the elite numbers he put up elsewhere. He finished tied for third among Power-5 quarterbacks with 19 first downs and led the group in passing yards, compiling 424 to lead his team to victory.

A dynamic Oklahoma State offense couldn't keep up with Texas Tech on Saturday, but Hubbard did his part. Fresh off a 300-yard effort in Week 5, Hubbard added 156 more in Week 6. His 10 first downs tied for second in the country as he continues to make his case for a Heisman Trophy.

Despite two fumbles marring what was otherwise a standout effort, Gilbert finds himself on this list. His 94 yards on the ground ranked third among Big-12 backs in Week 6. On the season as a whole, he is tied for second among Big-12 running backs with 21 first-down carries.

Duvernay claims the slot as his stomping grounds, and in Week 6, he continued to dominate from inside. He saw eight targets, hauling in six of them for 86 yards, ranking 15th among Power-5 wideouts in yards per route run (3.31) from the slot (min. five targets).

When a wideout is seeing 10-plus targets on a regular basis, that's usually a sign they are doing something right. Such is the case for Jones, who had 10 or more targets for the third time in five games. He made good on it with nine catches for 101 yards, pushing his passer rating when targeted on the season to 113.7.

It was a mild week for Big 12 tight ends, as none managed to top 50 yards receiving and just two caught touchdowns. Regardless, Thompson was active against Oklahoma State — as were a number of his teammates on offense. He saw 10 targets, the fourth-most of any tight end in Week 6, and caught five of them.

Cosmi has still yet to allow a quarterback hit or sack on the season. His Week 6 performance had just one blemish — a single quarterback hurry — as he exerted his dominance, resulting in an impressive 83.9 game grade.

Knipfel ended Week 6 as college football's highest-graded guard (min. 25 snaps), and for good reason. He didn't surrender a single pressure on 33 pass-blocking snaps and paved the way in the run game with a 78.8 grade in the facet (first among qualifying guards in Week 6).

Texas Tech's sophomore center is playing well beyond his years, with Week 6 being his fourth game earning a 70.0-plus grade this season. He also furthered his streak of not allowing his quarterback to be hit — in 245 pass-blocking snaps this season, Deaton has given up just five quarterback hurries.

A graduate transfer from Georgia Tech, Braun showed out in the run game in Week 6. He ranked second among guards in run-blocking grade (77.1) and earned the highest game grade of his young season, posting a 71.2 mark in a win over West Virginia.

Joining teammate Josh Knipfel on the Week 6 Big 12 team of the week, Meeker earned the highest game grade (86.0) of qualifying tackles in Week 6. Meeker's run-blocking mark (85.3) was five full grade points higher than the next best tackle, and his pass-blocking prowess showed with no pressures allowed on 33 snaps. 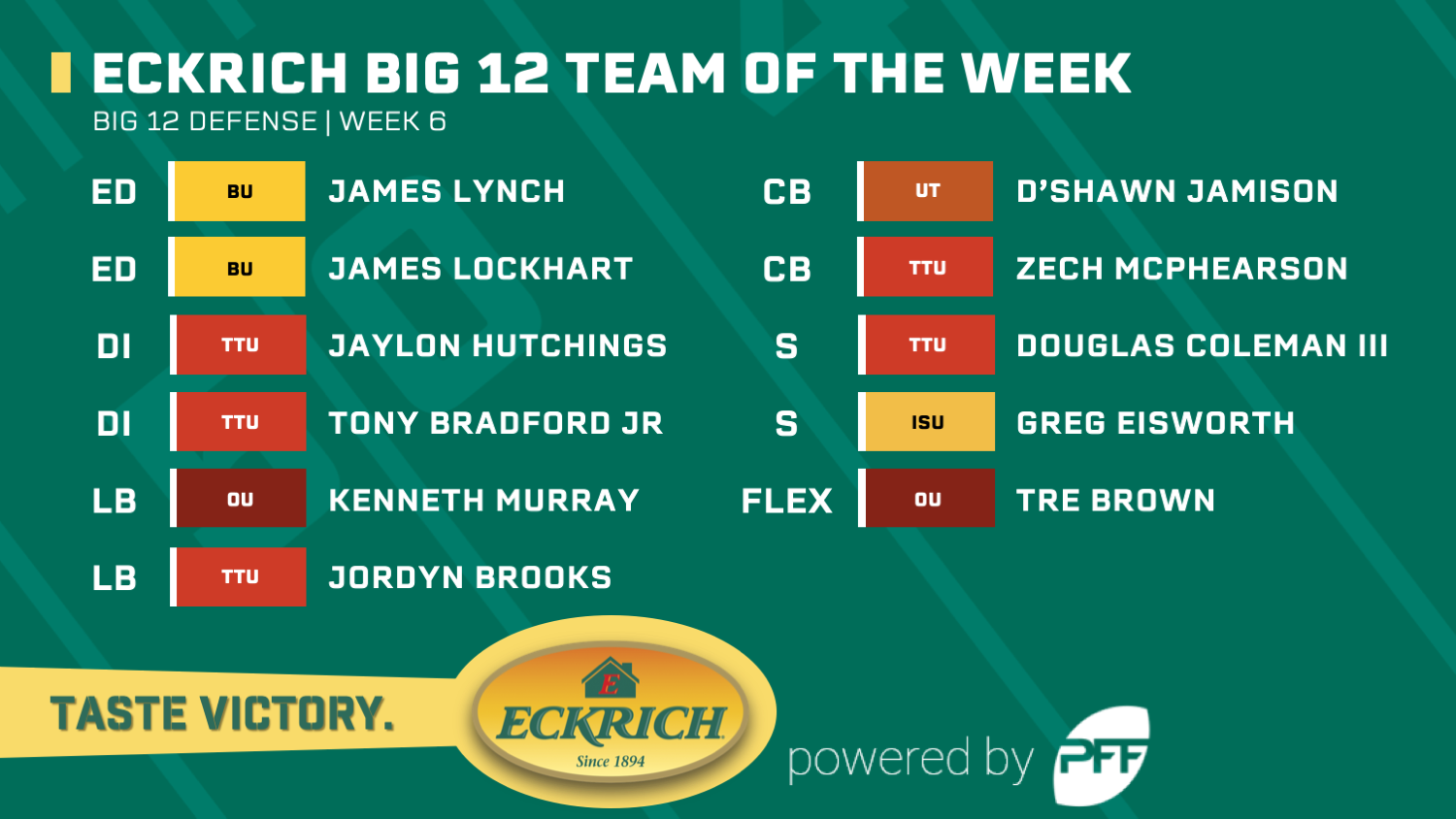 Baylor's edge-rushing tandem finds itself on the team of the week for obvious reasons — they got the quarterback early and often. Lynch totaled eight pressures in Week 6, including a whopping four sacks.

Lockhart matched his partner in crime, putting up eight quarterback pressures himself in Week 6. WHile that translated to just one sack, Lockhart made the most of his snaps with a strong 14.5 pass-rush productivity rating.

Texas Tech's defensive line was buoyed by Hutchings' elite performance, as he he earned the second-best grade among interior defenders in Week 6. He notched four quarterback pressures on just 22 pass-rushing snaps and added two stops, as well.

Bradford saw only 31 snaps on Saturday, making the most of his limited time on the field. He found the quarterback twice — a sack and a hit — on 16 pass-blocking snaps and picked up a run stop.

It's a common occurrence for linebackers to be torched in coverage. Murray, though, wasn't having it on Saturday. He faced three targets, allowing two to be caught for a meager nine yards. And he broke up the other, leading to an impressive 80.0 coverage grade.

Brooks made his mark in the pass-rush game, posting seven total pressures — including four sacks. That wasn't even his most impressive feat, as he racked up 12 stops on the day, which was the most among all linebackers in Week 6.

On seven targets that came his way, Jamison allowed just four to be completed for 29 yards. Among the three incompletions, he picked off two for a stellar passer rating when targeted of 27.4.

McPhearson was tied for the Big 12's most-targeted cornerback in Week 6, but he hardly looked fazed. He allowed five completions on nine targets for a mere 42 yards and broke up two passes.

Two interceptions for Coleman was the result of his coverage prowess against Oklahoma State, where he allowed just two completions on four targets to go along with five tackles.

Allowing a passer rating of 0.0 into your coverage isn't too shabby, and that's exactly what Eisworth did in Iowa State's win over TCU. There is an asterisk, however, as he wasn't targeted once — but he still notched a pass breakup and held firm on 14 coverage snaps.

Brown faced four targets on just 22 coverage snaps in Week 6, allowing a single completion for 19 yards in Oklahoma's 45-20 win over Kansas. That continued what has been a lockdown season for Brown, where he's allowed just five completions on 14 targets.