The Week 4 Eckrich Big 12 Team of the Week powered by PFF saw some impressive performances and, of course, the strength of opponent also factored into the overall selections as did the PFF player grades. 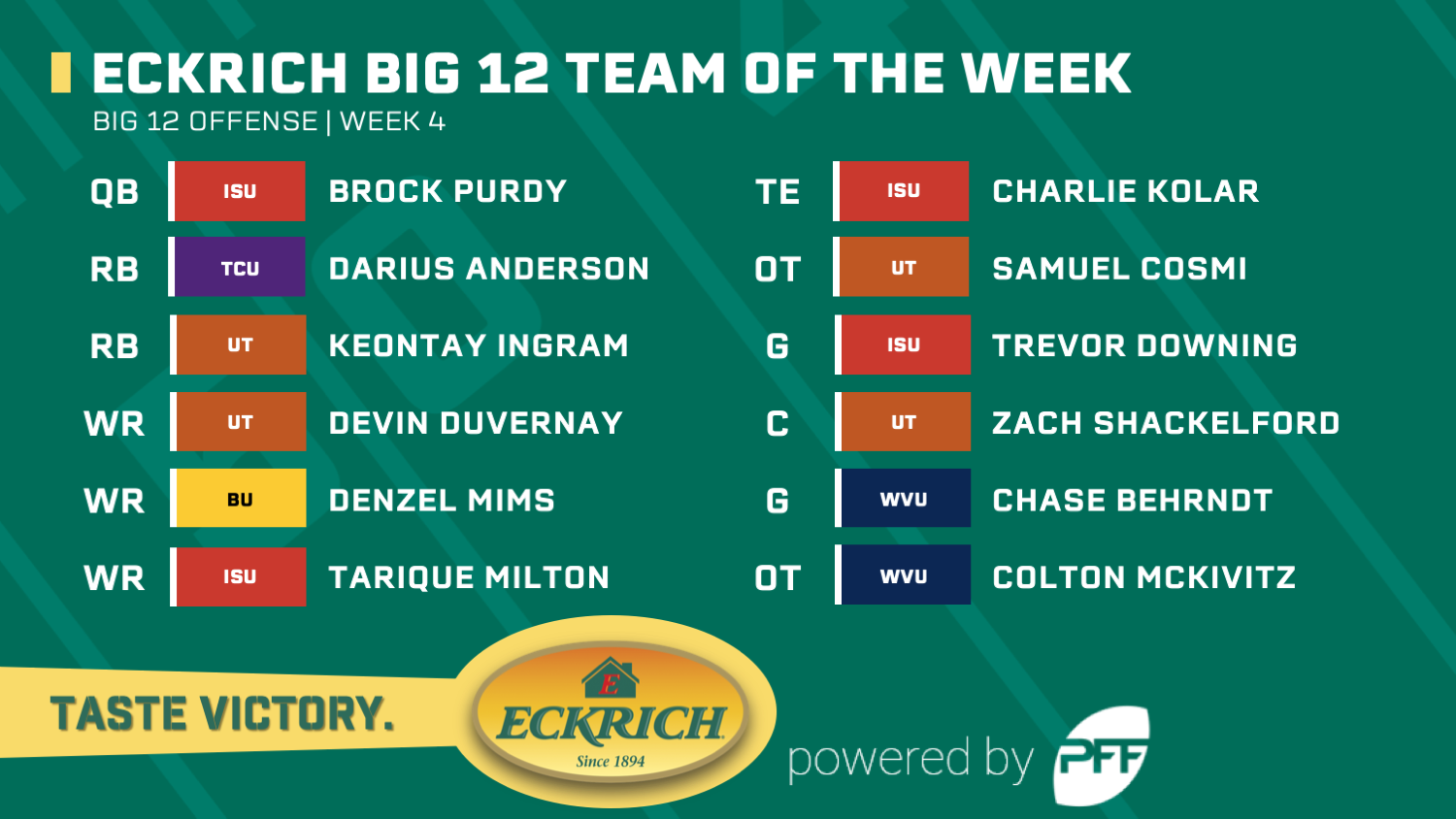 Purdy finished the game against UL-Monroe with elite-level overall and passing grades as he threw for 435 through the air with three touchdowns and added three more rushing touchdowns on the ground. Previous to this game, UL-Monroe had allowed just 446 passing yards and Purdy almost reaches that mark by himself in a big-time performance.

Anderson totaled 168 yards on the ground, gaining a whopping 145 yards after contact. He averaged 8.0 yards per carry but had to earn 6.9 yards after first contact with the defender in a big outing despite the result.

Ingram bettered his counterpart in Hubbard on the other side as Ingram rallied for 114 yards on 21 carries and seven first-down runs. He gained 99 of his yards after contact and broke six tackles in the victory over Oklahoma State.

The highest-graded receiver in the conference for good reason, Duvernay was the only receiver to see double-digit targets and receptions this weekend. He turned 12 receptions into 108 yards and scored a touchdown with seven more first-down receptions, gaining 83 yards after the catch.

Mims is no stranger to highlight-reel catches and he just keeps making play after play with Charlie Brewer at quarterback for the Bears. He turned six receptions into 102 yards and five first downs with two broken tackles forced after the catch.

The Iowa State offense fired on all cylinders on Saturday and Milton was a big benefactor of Purdy's huge game. Milton was targeted just four times and had just three receptions but led the conference in receiving yards. All three of his receptions were conversions for a touchdown (1) or a first down (2) and he averaged 28.7 yards after the catch per reception.

Kolar was another benefactor of the Cyclones big offensive day, seeing seven targeted passes and turning those into five receptions for a conference-high 79 yards. He moved the chains with four of the receptions and saw a passer rating of 108.6 when targeted.

In a true dominant outing, Cosmi allowed just a single QB hurry on 36 pass-blocking snaps while finishing with the conference's top-five run-blocking grade as he was truly the conference's best tackle this weekend.

Iowa State's big game through the air wouldn't have been possible without some clean pockets and Downing allowed just one hurry on his 35 pass-blocking snaps. He also made clear lanes more often than not in the running game and had the nation's second-highest run-blocking grade among guards.

The conference's top pass-blocking grade from a center belongs to Shackelford as he was dominant in pass protection. Allowing just one hurry on 36 snaps, he rounded out a strong performance with the Big 12's third-highest run-blocking grade among centers.

On 44 pass-blocking snaps, Behrndt allowed a long QB hurry and finished just behind Downing with the conference's second-highest-run-blocking grade as he and McKivitz dominated in the run game. 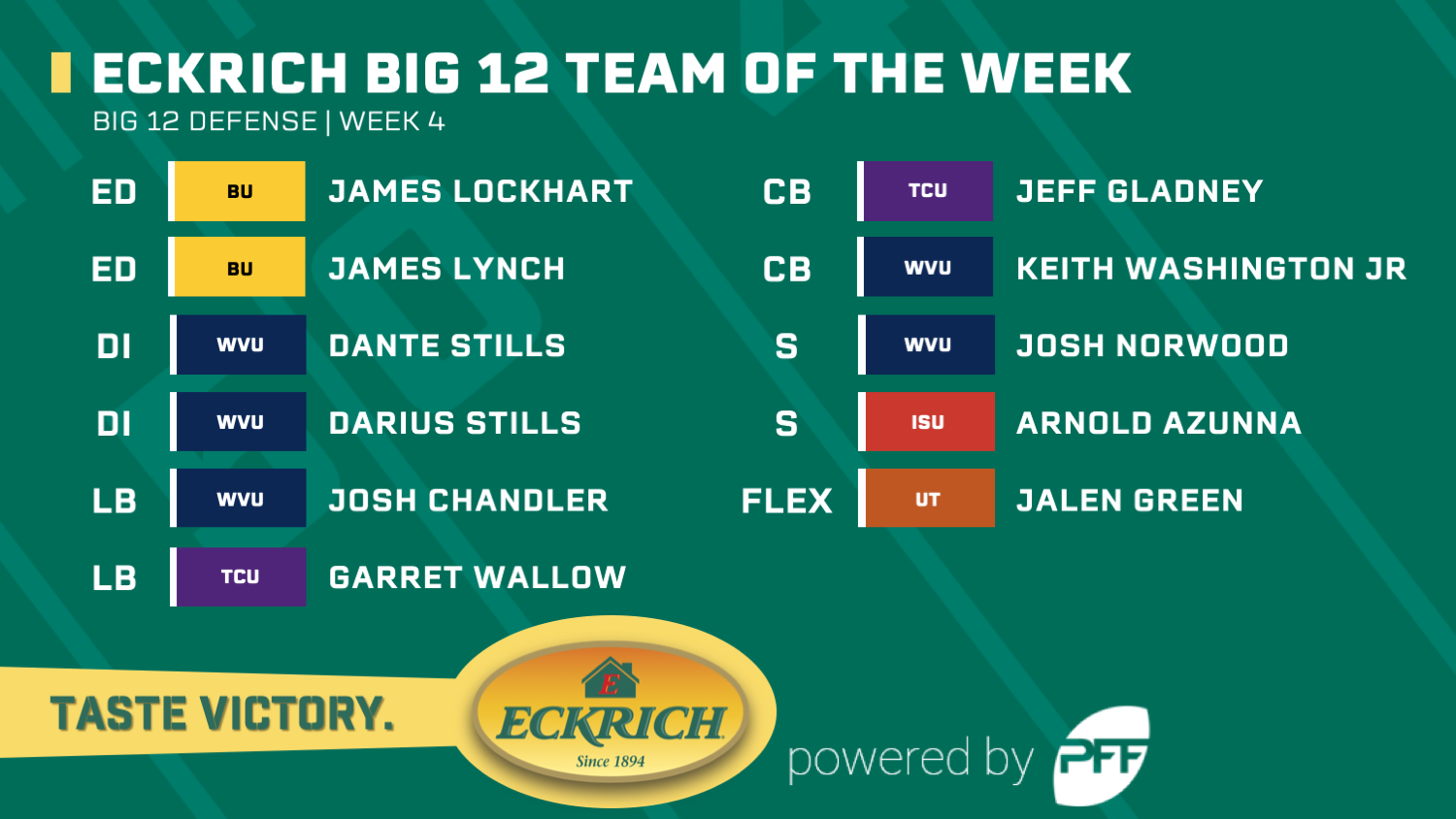 Lockhart exploded for two sacks and four hurries in a big-time six-pressure performance against Rice. He chipped in another stop in run defense as the Bears stymied the Rice offense on seemingly every possession,

Leading the Big 12 in pressures once again, Lynch finished with seven in the game including a sack and six more hurries. He generated another stop in run defense and did all this without missing a tackle.

The WVU duo here had a terrific game stopping the Kansas offense up the middle. Darius finished the game with two pressures and two defensive stops against the run as he clogged up the interior admirably.

The other Stills on the list, Dante led the Big 12 interior d-lineman with three pressures and a sack on his 23 pass-rushes while finishing the game with two more defensive stops and a forced fumble to boot.

Chandler flew all over the field and was a menace to the Jayhawks on the day. He finished with nine total tackles and no missed attempts while five of his solo tackles went for defensive stops.

The Horned Frogs didn't get the victory against SMU but they certainly saw some standout defensive performances. Wallow brought down 13 total tackles without a missed attempt, recorded a sack on one of his three pass-rushing attempts and finished the game with seven defensive stops. He was also targeted five times in coverage and allowed all of 31 yards.

Much like Wallow above, Gladney shined despite the result for TCU this weekend. He saw eight passes come his way in coverage, allowed just eight yards after the catch and made three pass breakups while chipping in with two defensive stops in the run game.

Washington made more plays on the ball than he allowed receptions against Kansas as he was targeted four times and allowed just a single catch for 14 yards. He made an interception and a pass breakup to finish with a passer rating of just 2.1 when targeted.

Norwood joins several Mountaineers on the list as he finishing the game with an impressive 11 total tackles and allowing just nine yards on 30 snaps in coverage. His big game saw him lead the conference at the position with an elite tackling grade.

Azunna tied Norwood for the highest grade in the conference as he finished the contest with a sack, six total tackles and four defensive stops without a missed tackle attempt. He allowed just 10 yards on his 13 snaps in coverage to round out a strong afternoon.

Despite an injury, Green was absolutely dominant for the Longhorns. On his 14 snaps in coverage, he was targeted just once and didn't allow the pass to be completed. He finished with two solo tackles, and one defensive stop against the run.