The Week 4 Eckrich ACC Team of the Week powered by PFF saw some impressive performances and, of course, the strength of opponent also factored into the overall selections as did the PFF player grades. 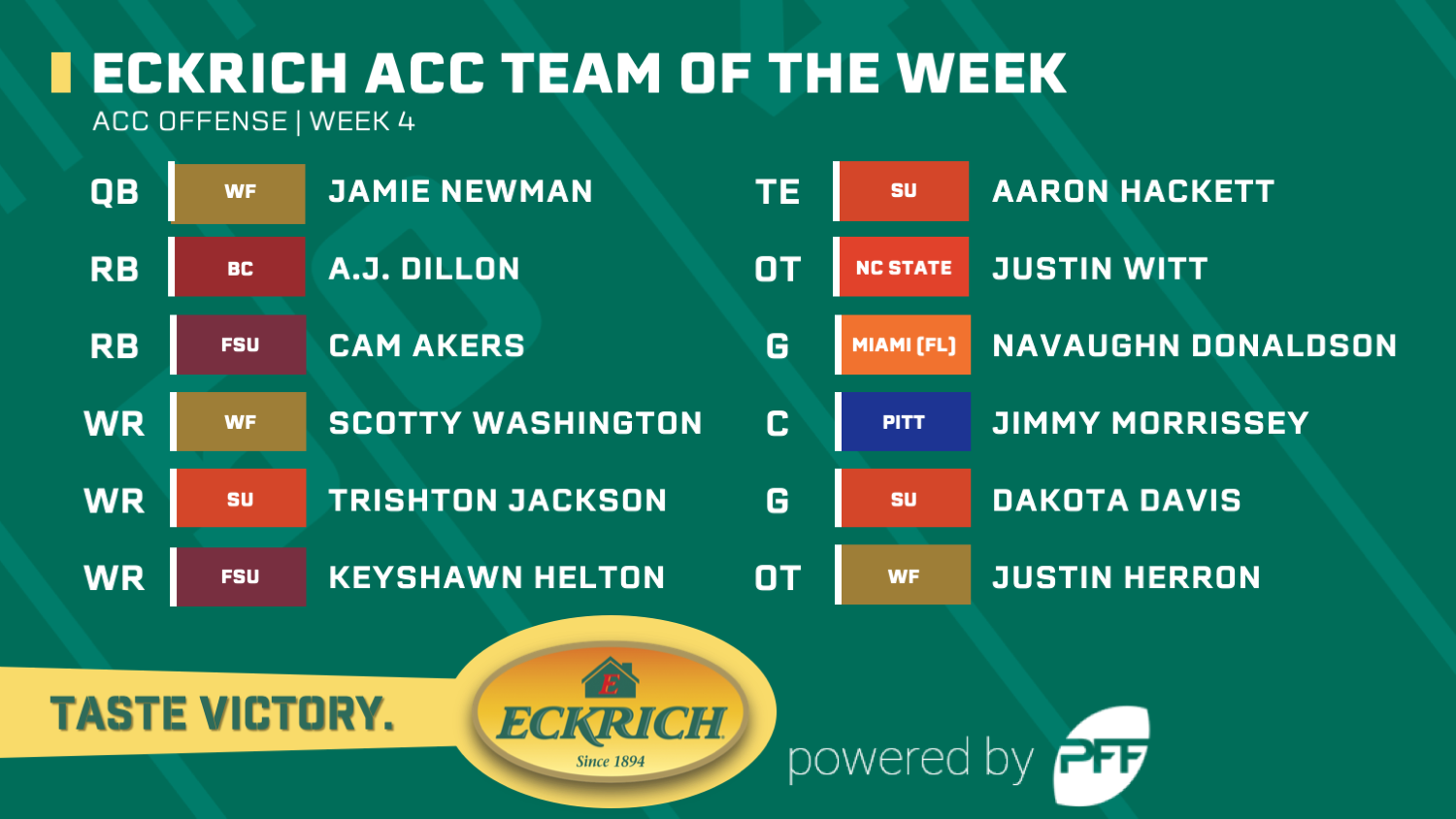 Another week, another dominant performance from Newman who is currently the highest-graded quarterback on passes targeted at least 10 yards downfield. The decision to start him over Sam Hartman is now turning past a wise decision and now speaking to more of a credit to Hartman for being able to push the conference's highest-graded QB through four weeks.

Dillon toted the rock a league-high 32 times for 150 yards. picking up two scores and eight more first-down runs. He gained 100 of his 150 yards after contact and broke six tackles in the process.

Akers is certainly becoming the bell cow for the Seminoles and despite averaging 3.9 yards per carry, still broke 11 tackles on his runs against Louisville. He scored three touchdowns and gained another seven first downs on his carries in a grinding performance.

Targeted more than any other receiver in the conference in Week 4, Washington has now finished the last two games without a drop after seeing four in his first two contests of the season. He turned nine receptions into 138 yards, two scores and three more first-down receptions.

Syracuse got yet another big-time performance from their talented receiver as Jackson turned six receptions into 141 yards and a conference-best 74 yards after the catch. He broke three tackles after the reception and saw a perfect passer rating when targeted.

Helton utilized some shifty moves to find himself wide open on a touchdown pass from Alex Hornibrook as he hauled in seven passes for 96 yards and two additional first-down receptions. He had a 148.1 passer rating on throws targeted his way.

The highest overall graded tight end in the conference for good reason, Hackett finished with six receptions for 48 yards and two scores while he gained 34 yards after the catch. He had a long reception of just 12 yards but was effective whenever he was targeted.

On 35 snaps in pass protection, Witt allowed all of just one QB hurry and finished with the conference's best run-blocking grade. He was sharp in both facets and looks the part at right tackle for the Wolfpack.

With a sack to his name, Donaldson's efforts in the run-blocking game were so dominant that he finished as the conference's highest-graded guard. He allowed just the sack as his lone pressure as well and still finished with plus-grades across the board.

Morrissey held his own against a talented UCF front and finished with the ACC's highest run-blocking grade and didn't allow a single QB pressure on 65 snaps in pass protection.

Davis allowed just a single QB hurry on his 43 snaps in pass protection while holding the conference's third-highest run-blocking grade among ACC guards.

Herron didn't allow a single QB pressure on his 46 pass-blocking snaps this past week, finishing with a commanding lead over the rest of the ACC tackles in pass-blocking grade while also grading positively in the run game. 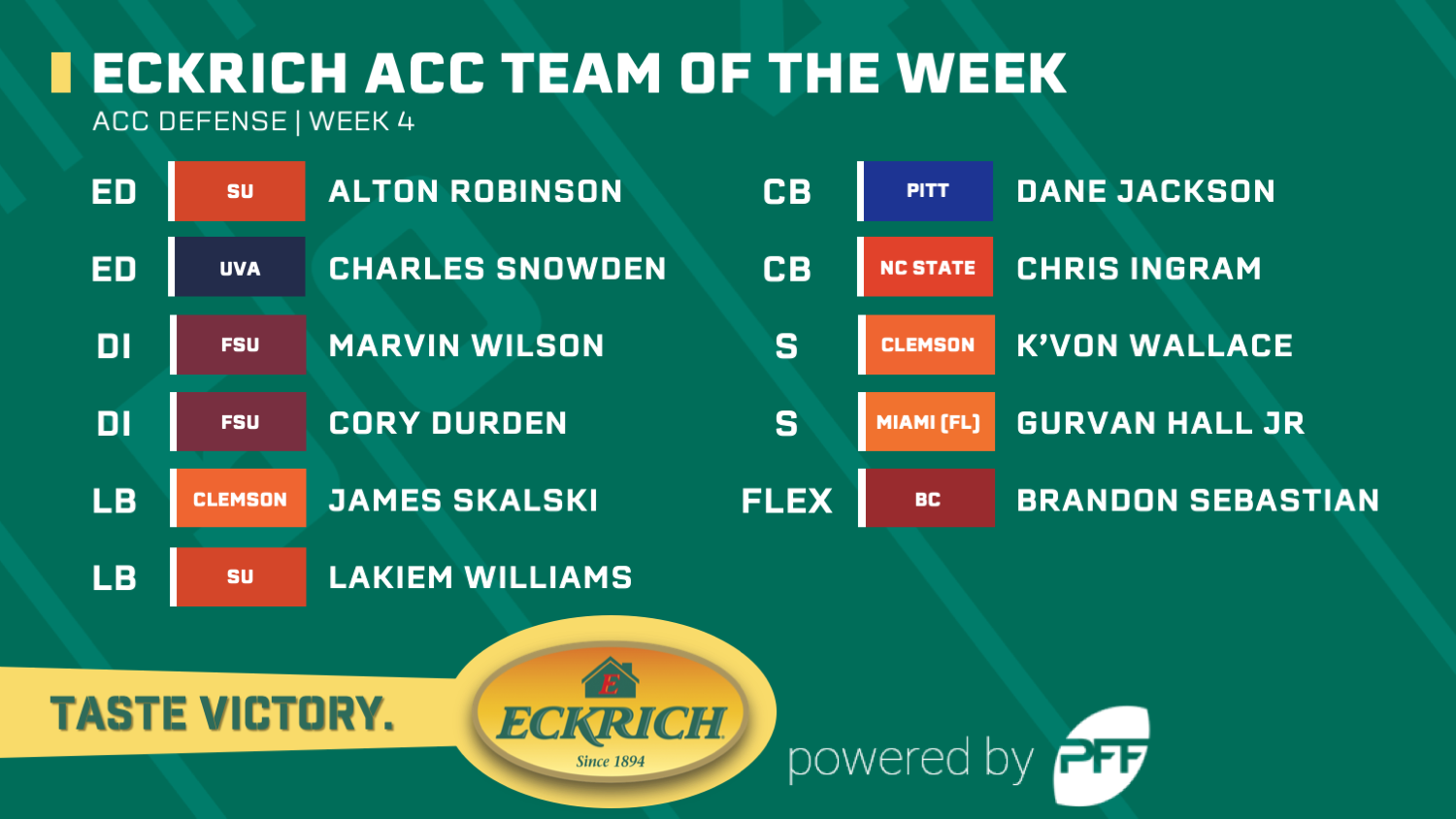 Robinson finished with 10 total pressures on his 50 pass-rush snaps including two sacks, a QB hit and seven more hurries. He recorded four stops in the run game as well as he crashed the offensive line with ease and dominated in each facet.

Exploding for nine pressures against ODU, Snowden had three sacks and four more QB hits to go along with two hurries. He recorded six defensive stops in the process and 11 total tackles without a missed attempt. Unlike the rest of the defensive linemen listed here, Snowden dropped back into coverage on 12 snaps and allowed just two yards into his coverage.

Wilson continued his dominant start to the 2019 season by putting forth a 3-sack performance against Louisville. He finished with five defensive stops and seven total tackles as he was all over the field and seemingly unblockable.

Durden pushed the pocket more often than he didn't and finished with five total pressures that included two sacks and a hit. He had three total defensive stops and opposite Wilson has proved to become arguably the nation's top interior duo.

Making three stops in run defense for the Tigers, Skalski was superb in his limited time on the field. He had just one target come his way in coverage and was shedding blockers to the tune of eight total tackles without a single miss.

Williams was targeted in coverage once and didn't allow the reception while he rushed the passer 11 times as a blitzer, finishing with three pressures and a sack. He made two more stops in run defense and totaled five tackles in the contest.

The Panthers allowed a bevy of big-time throws to Dillon Gabriel and the UCF offense but Jackson certainly had his wins in coverage. He allowed five receptions but kept everything in front of him while chipping in with five solo tackles and a defensive stop to boot.

Ingram made an interception and additional pass breakup while his eight solo tackles look even better next to his zero missed tackle attempts. He chipped in with two defensive stops and allowed just 14 yards after the catch.

On just 28 defensive snaps, Wallace was dominant and flew around the field like a missile. He batted a pass down at the line of scrimmage on a blitz and intercepted a pass on an acrobatic play. He also allowed just one reception into his primary coverage but limited it to no gain.

Hall was integral to Miami's victory on his 43 snaps in coverage. He was targeted six times as the primary coverage defender and allowed just three receptions for a whopping 26 yards. He broke up two passes thrown his way and chipped in with nine total tackles without a whiff.

Sebastian didn't allow a single reception thrown his way to be caught, breaking up one of the two targeted passes into his primary coverage on the afternoon. He also made a stop in run defense to prove his strong all-around game.