The Week 2 Eckrich Pac-12 Team of the Week powered by PFF saw some impressive performances and after our team of over 500 analysts grading every single player on every single play of every game, we give you the top players from the weekend. 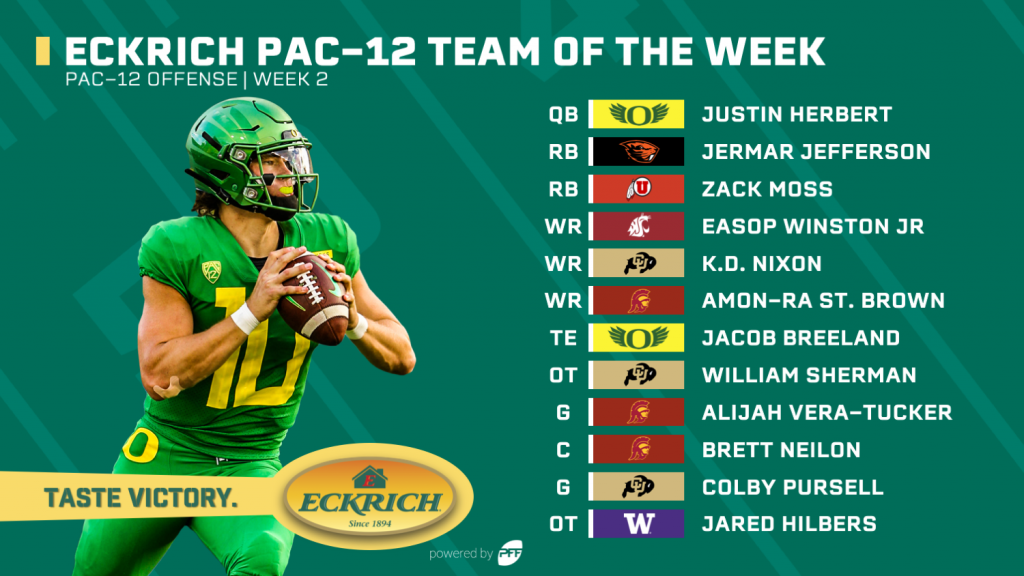 Herbert bounced back from his outing against Auburn with an elite game against Nevada, throwing five touchdowns and 310 yards. He averaged 11.5 yards per attempt and uncorked three big-time throws compared to zero turnover-worthy passes.

The Oregon State offense is certainly clicking to start the season as their defense hasn't quite caught up. That being said, Jefferson still got things rolling against Hawaii and churned our 183 yards on the ground including 103 after contact. He broke 11 tackles to tie Zack Moss for a conference- and national-best figure.

Moss has now broken 27 tackles this season as his 11 forced missed tackles this past weekend also paced the nation with Cam Akers of FSU and the aforementioned Jefferson. Moss gained 78 yards on 19 carries that included 60 yards after contact.

The Cougars are heading in the right direction with Air Gordon throwing the ball and Winston benefited from six targets this week. He hauled in all six targets for 113 yards and two touchdowns. Most importantly, all four other receptions moved the chains for a first down as well.

Pivotal to Colorado's comeback victory, Nixon's long reception of 96 yards was the longest not only of Colorado history but also the long reception so far in 2019 as he racked up 88 of his 148 yards after the catch and forced four missed tackles.

St. Brown's big day comes on the heels of Kedon Slovis' entrance into the lineup full-time as he hauled in 8-of-9 targets for 97 yards and two scores. He broke two tackles after the catch and Slovis saw a 151.2 passer rating when targeting St. Brown.

Breeland's highlight-reel moment came when he sprinted 66 yards for a score as the Ducks blew out Nevada. He tallied 112 total receiving yards on the day, on four catches and gained 54 of his yards after the catch.

Even with a sack allowed in pass protection, Sherman was solid on his 47 pass-blocking reps, allowing just the one pressure. He also was dominant in Colorado's rushing attack as he finished with the Pac-12's second-highest run-blocking grade among tackles.

USC's big man in the middle clogged passing lanes with great efficiency, allowing just one QB hurry on 40 pass-blocking snaps. He was great in the run game as well as he finished with the conference's second-highest run-blocking grade.

On 40 snaps in pass protection, Neilon allowed just a single QB hurry while also holding a big grade for the run game, the second-highest among centers in the conference.

Pursell was extremely impressive in the run game as he paved the way for the Buffs rushing attack and allowed three hurries on 47 snaps in pass protection.

The highest-graded tackle in both run-blocking and pass-blocking was Hilbers, despite the result for the Huskies. He didn't allow a single QB pressure on 38 pass-blocking snaps and had a dominant effort in the run game. 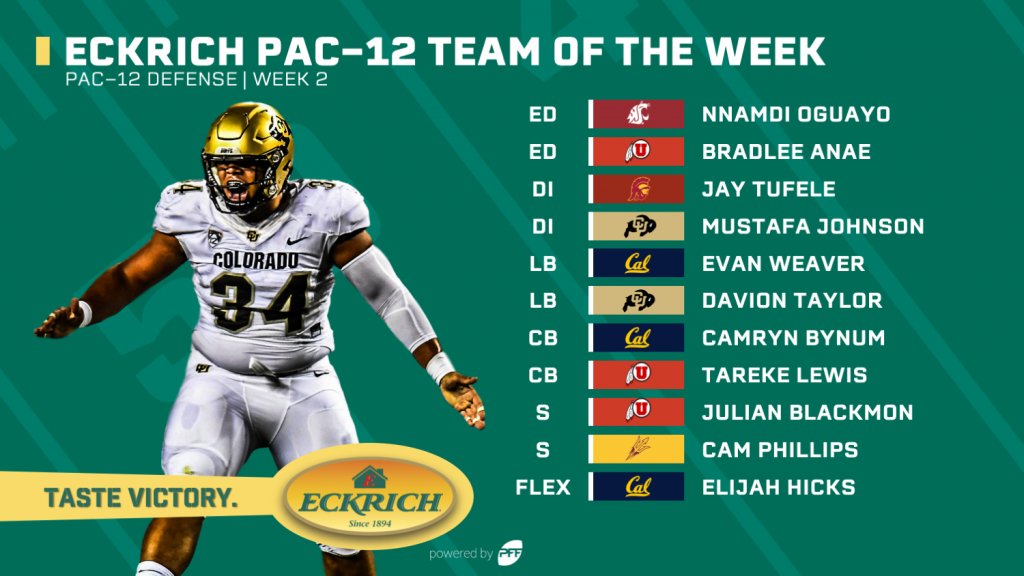 Dominant in the run game, Oguayo recorded a defensive stop and forced two fumbles while grabbing a QB pressure and multiple pass-rush wins on his 11 pass-rush snaps.

Recording eight total pressures, Anae had his first big-time performance of the 2019 season, something Utes' opponents better get used to seeing. He made two sacks, two hits and four more QB hurries on his 35 pass-rushing snaps.

Making four solo tackles, Tufele recorded all four as defensive stops while grabbing a sack and an additional QB hurry on the passer. He finished with five total tackles without a miss.

Johnson's biggest moment came when he sacked Adrian Martinez late in the fourth quarter as he led the conference with five total pressures from the interior of the defensive line. He had two sacks on the afternoon and came up big in crunch time.

The nation's highest-graded linebacker from 2018 was back at it again, pivotal to Cal's upset victory over Washington. He made a whopping 11 defensive stops, 18 total tackles, three QB pressures and allowed just 18 yards on five targets in 34 coverage snaps. An all-around elite performance from one of the country's top three-down linebackers.

The ‘other Colorado linebacker,' Taylor was sharp in coverage just as he was against the run. In total, he recorded eight solo tackles, five defensive stops and did so without missing a single tackle attempt. Nebraska's short-area passing attack targeted him seven times and he allowed just four receptions for 13 yards with a pass breakup to boot.

Bynum and the rest of the Cal secondary made life miserable for the Huskies late on Saturday night (Sunday morning) as Bynum didn't allow a single reception on three targeted passes. He made an interception and an additional tackle in run defense to round out the night for him.

The Utes have arguably the nation's top defense and Lewis is just another player to watch on the unit. He was targeted four times and allowed three receptions but they totaled just 16 yards including just two yards allowed after the catch.

With elite grades in coverage and overall, Blackmon made eight total tackles and was targeted once as the primary coverage defender. He made an interception and multiple other times closed on coverage during his 34 snaps against the pass.

Phillips recorded six solo tackles without a missed attempt and was targeted twice in the passing game, allowing just one reception as the primary coverage defender. He picked off the other and allowed just a 22.9 passer rating into his coverage for the day.

Hicks was strong in coverage for Cal, allowing just one reception for two yards on the two targeted passes thrown his way. He added a sack as well and didn't miss a single tackle in run defense or coverage.